OSDH: Oklahoma COVID-19 cases decrease in past week as deaths continue to rise 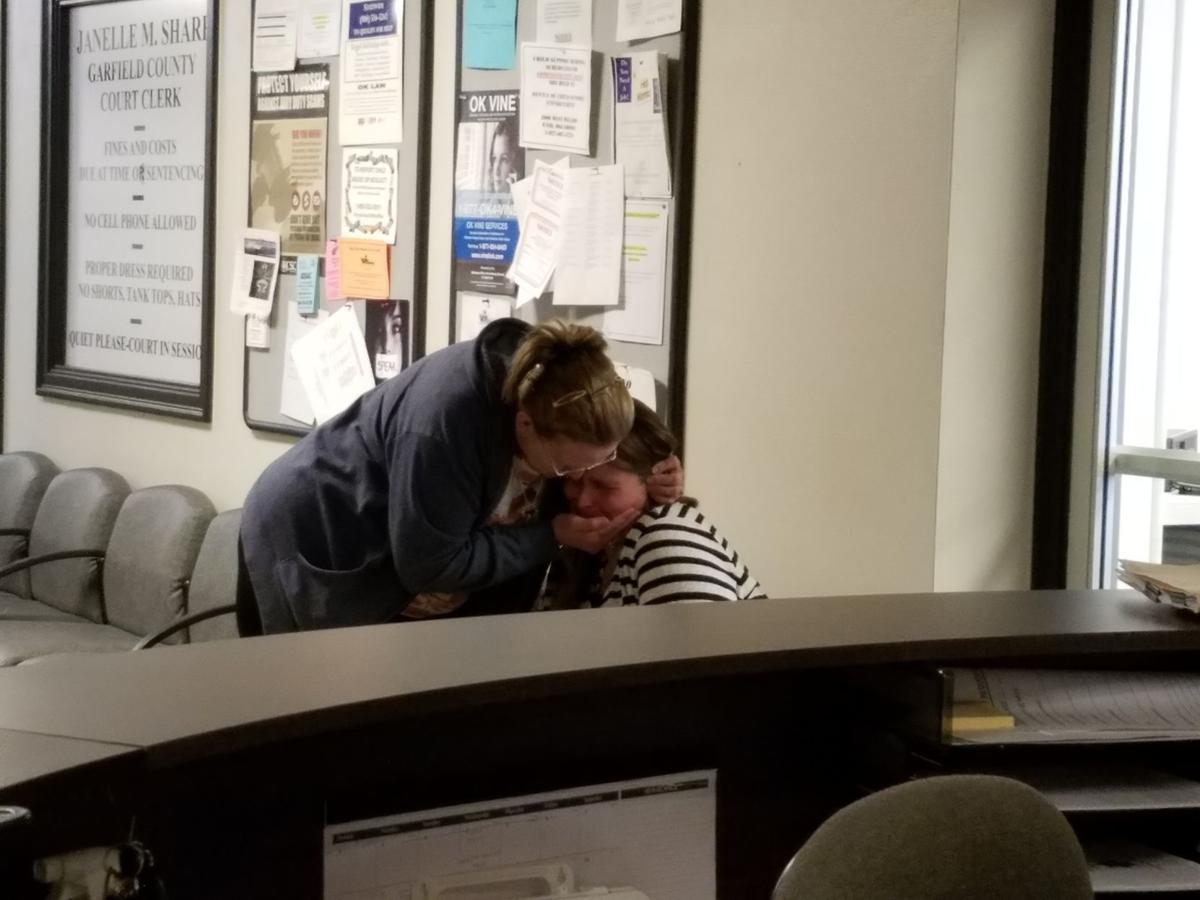 A woman consoles Jessica Lynn Good following her sentencing hearing Monday morning. Good was sentenced to three years in prison and 17 years probation on charges related to lying about her daughter's cancer and defrauding welfare. 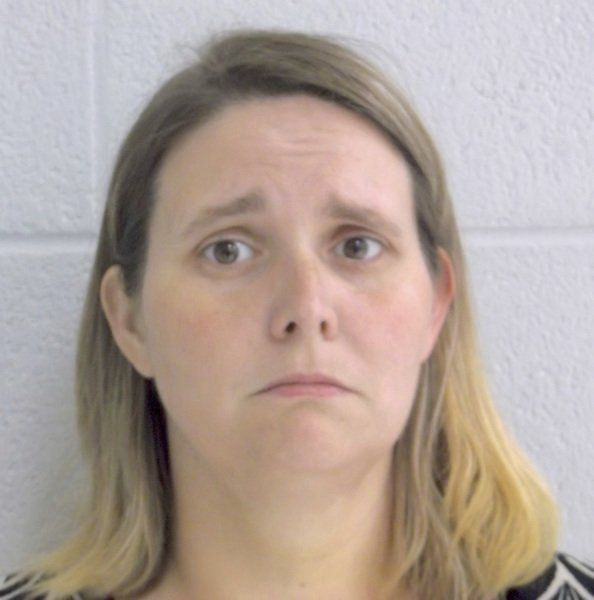 A woman consoles Jessica Lynn Good following her sentencing hearing Monday morning. Good was sentenced to three years in prison and 17 years probation on charges related to lying about her daughter's cancer and defrauding welfare.

ENID, Okla. — A woman charged last year with welfare fraud, child abuse and obtaining money by false pretense after lying about her daughter’s treatment for cancer was sentenced to time in prison Monday following a hearing.

Jessica Lynn Good, 33, also known as Jessica Lynn Liebsch-Good, was sentenced to three years in Department of Corrections custody and 17 years probation. She also was ordered to repay $69,565.48 in restitution.

Good was charged in August 2016 when suspicions of those who helped her raise funds to help pay for treatments for her daughter’s terminal cancer were shared with police. Investigators found thousands of dollars had been raised for the benefit of Good’s daughter, who did not have cancer.

After the evidence was presented, Woodward read a letter from the counselor of Good's children and spent several minutes taking notes on the court docket before delivering his sentence. He first spoke of the difficulty of presiding over such cases.

"These are not easy days for me," the judge said to the more than dozen people in attendance. "I wish this was just a financial crime. It would make it a whole lot easier but it is not."

Woodward told Good that telling her child, and the girl's siblings, that she was going to die from cancer is "extremely cruel abuse."

He sentenced her to 15 years in Department of Corrections custody, with all but three years suspended, on the child abuse charge. He also ordered her to pay court costs, fines and fees, a $1,000 fine and $69,565.48 in restitution.

In her closing argument, Hart asked the court to pay attention to a portion of the presentencing report to a comment from a victim that said after her experience with Good, she would no longer do any charity work.

She said Good took more than $45,000 from state welfare that could have gone to someone who truly needed it. She said Good's actions also "proved all the pessimists right."

"These crimes were committed for nothing but greed. How sad your honor," Hart said. She again read from the presentencing report, "It appears she would have continued to lie if not caught and arrested."

Hart asked, "When would it have stopped?"

Hart asked the court to sentence Good to five years in prison followed by 15 years probation.

Barker asked the court to follow the sentencing recommendation in a presentencing report by giving Good 20 years probation. He argued having Good in custody would further delay restitution being repaid to victims.

"She has acknowledged her guilt, the hurt she's caused her family and children," Barker told the court. "She has undertaken steps necessary to to address issues that led to this behavior."

He noted the progress Good has made that her two counselors and her Celebrate Recovery sponsor detailed in their testimony.

"Her actions did cause harm. There is no doubt she is deserving of punishment," Barker said. "Mrs. Good has acknowledged the crimes she has done. She's attempted to make this right. I don't believe Mrs. Good poses a threat to the community."

Good read from a three-page statement she prepared prior to court, often crying while reading the statement.

"I used my child to take advantage of the charity and trust of others to benefit myself. I knew it was wrong at the time, I knew that that (sic) I was harming my family and the people who trusted in me, but at the same time, I did not consider the harm I was causing. I thought only about myself."

Good told the court the money she took went for everyday expenses, such as bills and activities for her kids, and she even spent some of the money on tickets to Oklahoma State University sporting events.

"The reason I did what I did comes down to greed, disregard for others, seeking sympathy and acceptance, and a life out of control," she said. "I have no excuse for the way I acted. I look back and don't know why I did what I did."

Good apologized twice in the statement and said she has been performing community service and has begun repaying some of the money she took.

"It's been difficult, I've been castigated by people in public, in front of my children, and I deserve it, but it hurts. I have already caused my children to suffer because of my actions and don't want to cause them any more harm that I have already caused," she said. "I know that I deserve to be punished. I know that my punishment, whatever it is, will change my life, and I fully accept that. I ask that you allow me the opportunity to be here for my children and allow me enough time to repay the money I took."

During cross examination, Good's answers often were one word and barely audible to those in attendance.

Hart asked Good how she felt about the woman from Oakwood Christian Church who said she would no longer conduct charity work because of Good's actions. "Horrible," Good whispered.

Hart asked Good what she felt a fair sentence in the case would be.

"I believe in grace and mercy," Good said. "I don' really know how to answer that."

"If my suspicions were wrong, I would be the lowest scum on the earth," he said. "I think there were suspicions long before anyone spoke about it."

Seibel said he lost his father to cancer and could tell anyone the exact diagnosis, stating it is something he'll remember for the rest of his life. He said when he asked Good about her daughter's Hodgkins lymphoma, she said it was "just the regular kind."

The pastor also mentioned the many differing stories Good told about her daughter's ailments, her own illnesses, and a decision to accept her daughter's fate and halt treatment, only to find the next day that Good was attempting to fundraise for a trip to Chicago for a new treatment

"Pretty much everything I know about Jessica has been a lie," Seibel told the court. "I think this goes way beyond money being taken. They even made a mockery of God by asking for healing."

Seibel did say Good reached out to him but since there was a gag order in the case he did not speak with her to ensure the court's wishes were upheld.

Detective Robin Bench, who investigated the case, told the court when he first confronted Good about the lies he'd uncovered concerning her daughter's health she did not seem to understand she's done anything wrong.

He said when Good was told DHS was going to take custody of her children, her response was, "OK."

The detective said there were other victims in the case, such as universities and professional athletes, that did not come forward because they did not want the publicity or the embarrassment their involvement would bring.

After each plea, Woodward asked Good, "Because you are guilty?" She replied each time, "Yes, your honor."

A pastor reported to authorities the woman told the church her daughter had cancer, several seizures, is undergoing stem cell research and is on a waiting list for a heart transplant, according to the affidavit.

A woman was sentenced in 2017 after being charged with fraud in 2016 in connection with falsely claiming her daughter had cancer.