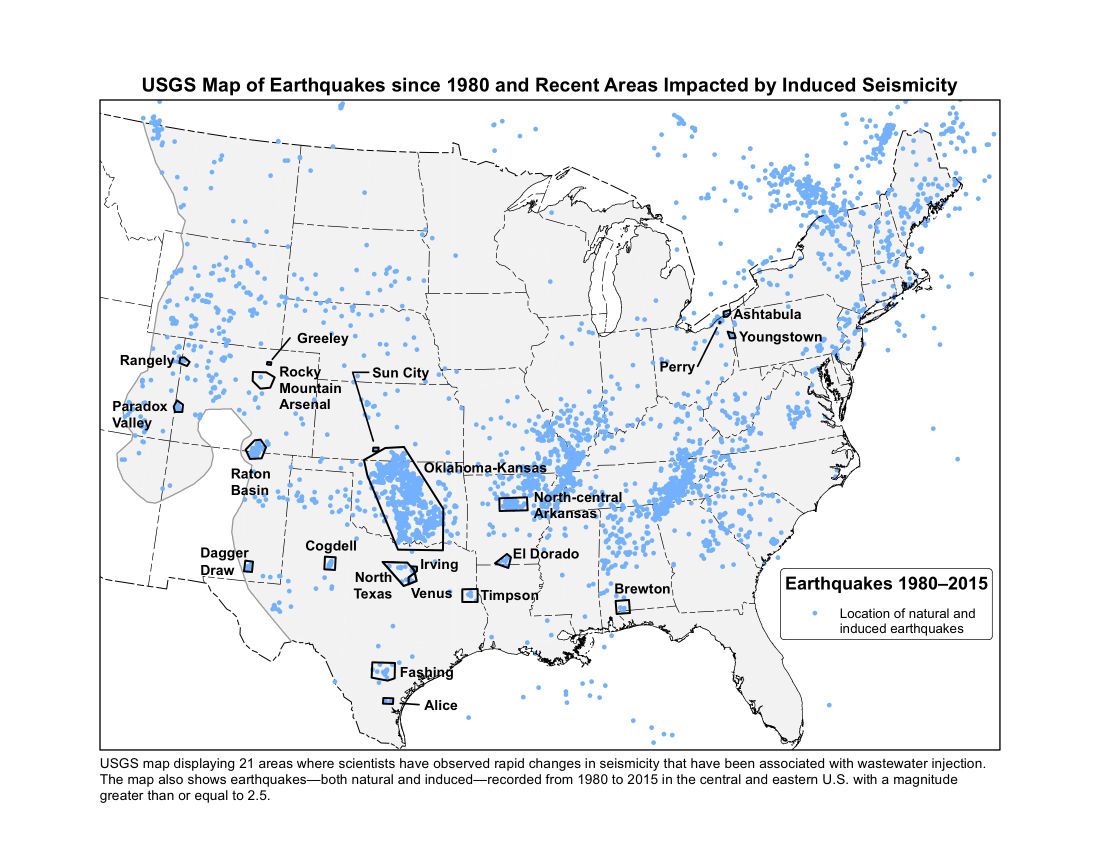 United State Geological Survey map shows 21 areas where scientists have observed rapid changes in seismicity that have been associated with wastewater injection. 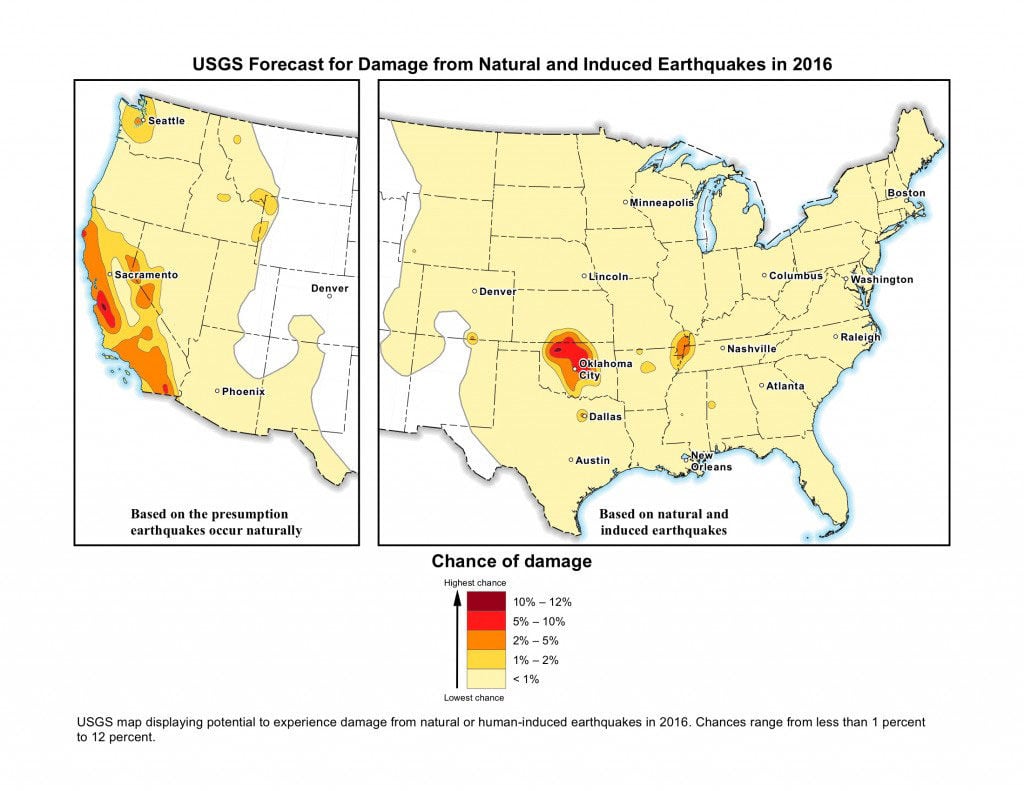 United State Geological Survey map displays areas with the most potential to experience damage from natural or human-induced earthquakes in 2016.

United State Geological Survey map shows 21 areas where scientists have observed rapid changes in seismicity that have been associated with wastewater injection.

United State Geological Survey map displays areas with the most potential to experience damage from natural or human-induced earthquakes in 2016.

North-central Oklahoma is in an area with the highest chance of experiencing a damaging earthquake this year, according to data compiled by U.S. Geological Survey.

The USGS released maps on Monday displaying potential ground-shaking hazards for both natural and human-induced earthquakes.

This is the first time the maps have included induced seismicity information.

The maps accompany a study, “One-year seismic hazard forecast for the Central and Eastern United States from induced and natural earthquakes” for 2016.

“By including human-induced events, our assessment of earthquakes hazards have increased in parts of the United States,” he said. “Oklahoma and Texas have the largest populations exposed to induced earthquakes.”

“They already had a damaging earthquake of (magnitude) 5.1 earlier this year,” he said.

The maps and report show north-central Oklahoma to be in an area of the highest chances of experiencing a damaging earthquake this year, either natural or induced.

The USGS forecast for damage from natural and induced earthquakes in 2016 shows areas of Oklahoma, particularly north and central areas of the state, to have a 1 to 12 percent chance of experiencing a damaging earthquake, as compared to areas of the northern or eastern United States that have a less than 1 percent chance.

“It’s a really challenging thing for us to do,” he said. “As far as we can tell, induced earthquakes have the same slip processes as natural earthquakes.”

Seismologists can’t immediately look at a seismogram and know if an earthquake is natural or induced, Rubinstein said.

“We need better seismic and industrial data,” he said, adding more seismograms can help better determine the location and depth of earthquakes. “We need the industrial data telling us injection volumes and pressures where they’re injecting. If we can connect those in time and space, we will have a better idea.”

Oklahoma Independent Petroleum Association put out a statement Monday afternoon in response to the report.

“Oklahoma’s independent oil and natural gas producers acknowledge the importance of the issue of induced seismicity, but we are concerned with the approach outlined by the USGS,” said Kim Hatfield, association induced seismicity workgroup chairman. “The USGS study admits the complexity of the question of induced seismicity but then makes the flat assumption that any seismicity in the central U.S. in proximity of a wastewater well would be classified as an induced event.

“In a state like Oklahoma with more than 10,000 injection wells, it is difficult to find any phenomenon that is not in proximity to an injection well.”

“Under directions from the OCC, disposal well operators have spent more than $50 million to adjust their wells’ depths with the aim of reducing the potential risk of contributing to seismic activity.”

OCC is working with well operators to reduce injection amounts into the Arbuckle formation to 40 percent below the total amount injected in 2014, according to the release.

"Oklahoma remains committed to doing whatever is necessary to reduce seismicity in the state," Fallin said. "The report supports the actions that we are taking."

Commissioner Dana Murphy said the map backs up their actions.

"The OCC has taken more than 25 actions over the past three years, and the response will continue to evolve with the science and research," she said. "... Continued development will provide another important tool for Oklahoma and other states that are working to reduce earthquake risk."

“It should be noted that the report does not address the potential for cumulative damage from multiple small to moderate earthquakes over time,” he said. “Although the OGS had expressed its interest in such assessments as part of this report, they would require a separate assessment and additional resources.”

The seismic activity in central and northwest Oklahoma continues to evolve, he said.

“The OGS will continue to work with the USGS, evaluate the patterns of seismicity, and share our results with Oklahomans,” he said.

Much of the seismicity in the state has been concentrated in a specific area in northwest Oklahoma, near Waynoka, Boak said, and another magnitude 5.1 quake is not off the table.

“It’s certainly within the realm of possibility, and it is most likely it would happen in the same area,” he said. “About 75 to 85 percent of all seismic energy released in the state is released in this area. … We are calling it the Galena Township Fault.”

Boak said because the report was released Monday afternoon, OGS hasn’t had a chance to thoroughly study more than the maps, but will review it in greater detail.

“Often times, the way we find out about faults is they start having earthquakes,” he said. “A good percentage of earthquakes in Oklahoma were occurring in faults that a good portion of the scientific community didn’t know about.”

Oil and gas industry research has helped USGS and Oklahoma Geological Society find new faults that have activated in Oklahoma.

“With the development of the Oklahoma Fault Map by the OGS and industry partners, they identified many faults known to industries based on their exploration,” he said. “Oil industries knew about faults previously unknown to the academic community. Now we have a much better sense of what fault structure looks like in Oklahoma.”

Following the USGS release of the induced and natural seismicity maps, two sizable earthquakes were recorded at Crescent, following a smaller quake in Enid.

A magnitude 4.2 temblor — felt by some in the Enid area — was recorded at 11:53 p.m. Monday in Crescent, according to the U.S. Geological Survey. It was 2 miles deep.

Jessica Miller contributed to this report.

Asher is education reporter for the News & Eagle. She can be reached at sasher@enidnews.com.

Two sizable earthquakes have been recorded at Crescent, following a smaller quake in Enid.

When the U.S. Geological Survey released maps on Monday displaying hazards for both natural and human-induced earthquakes, we were troubled to see Oklahoma on that map looking as bad or worse than California.