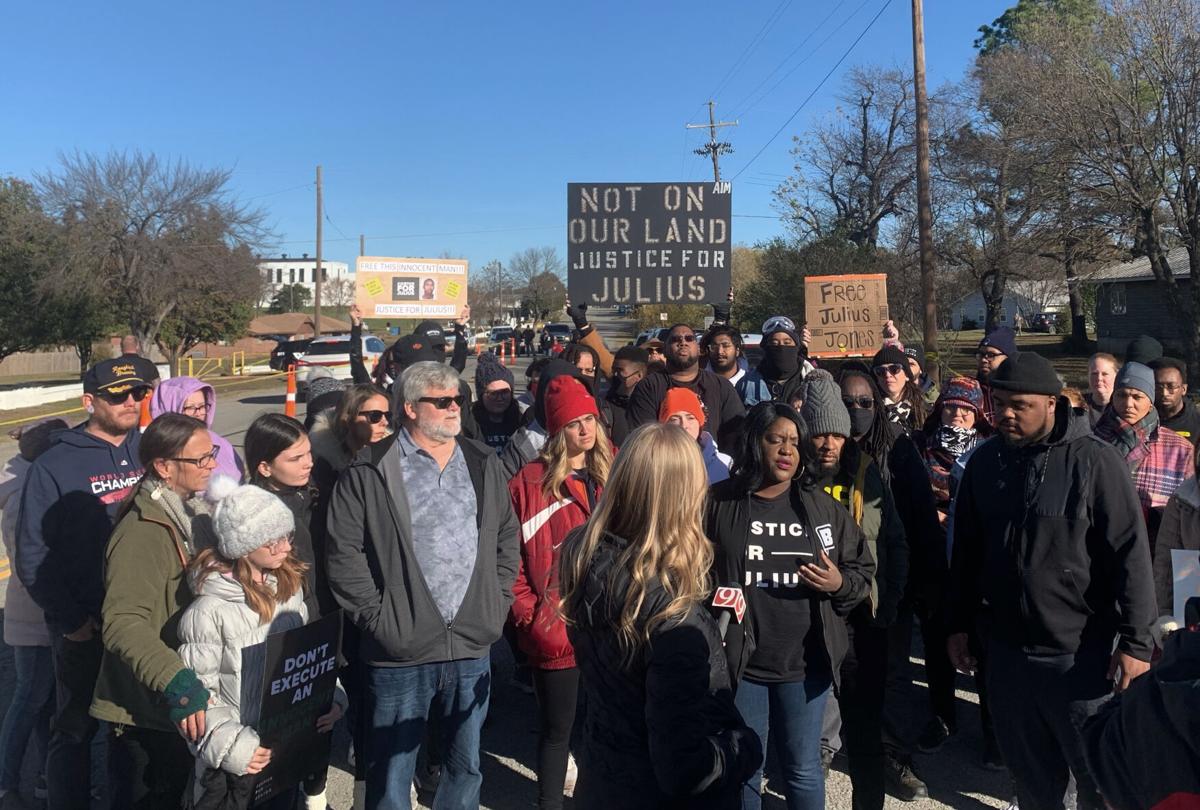 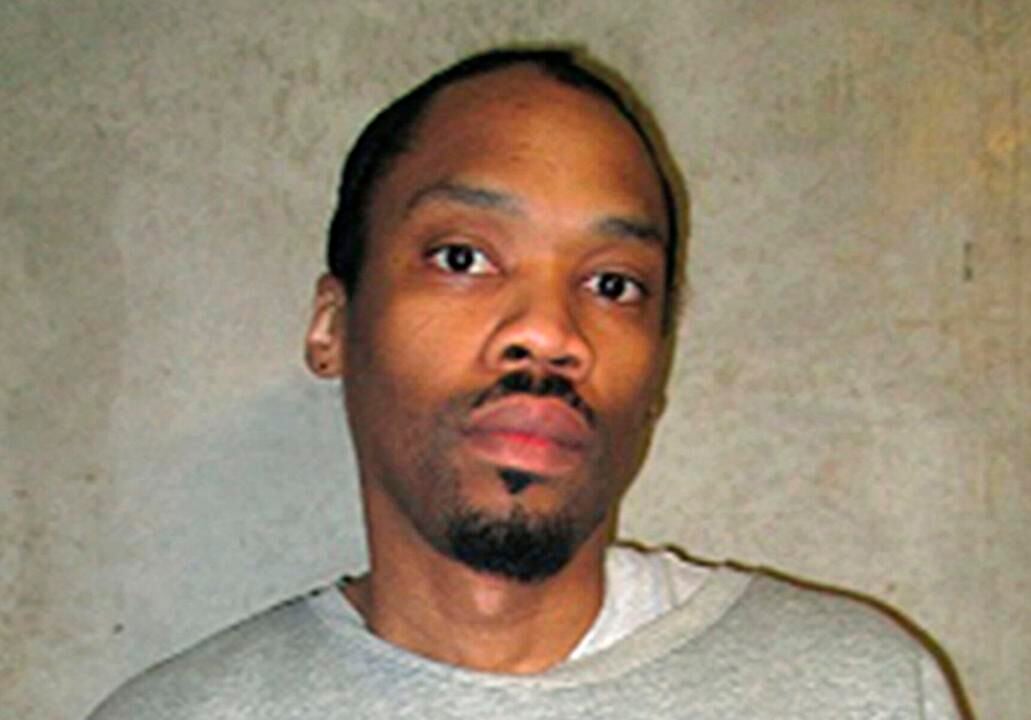 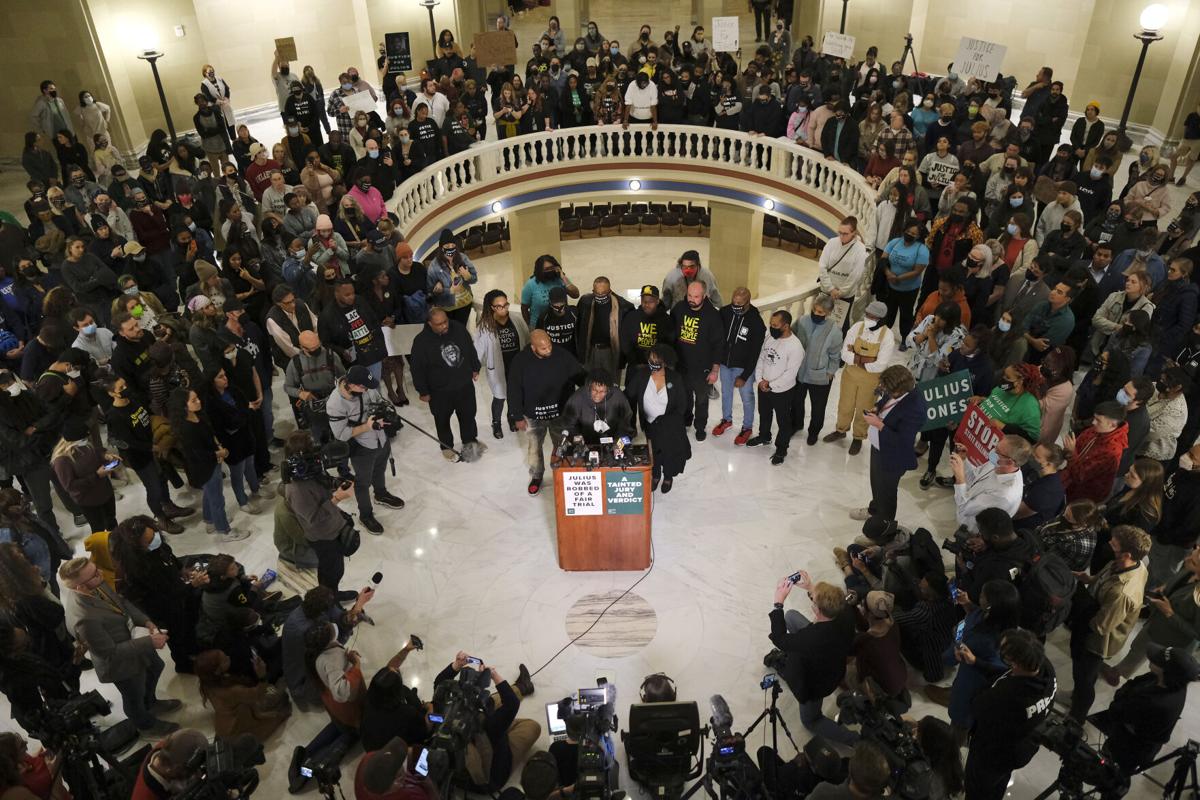 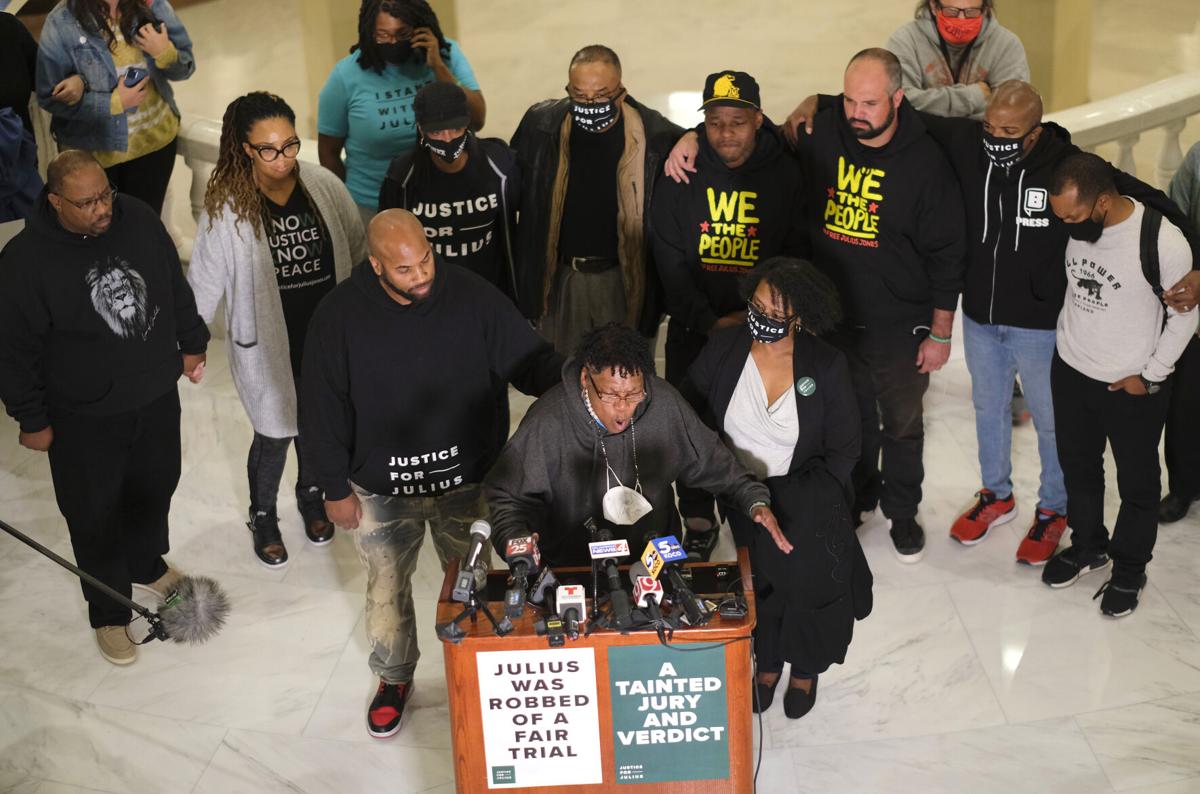 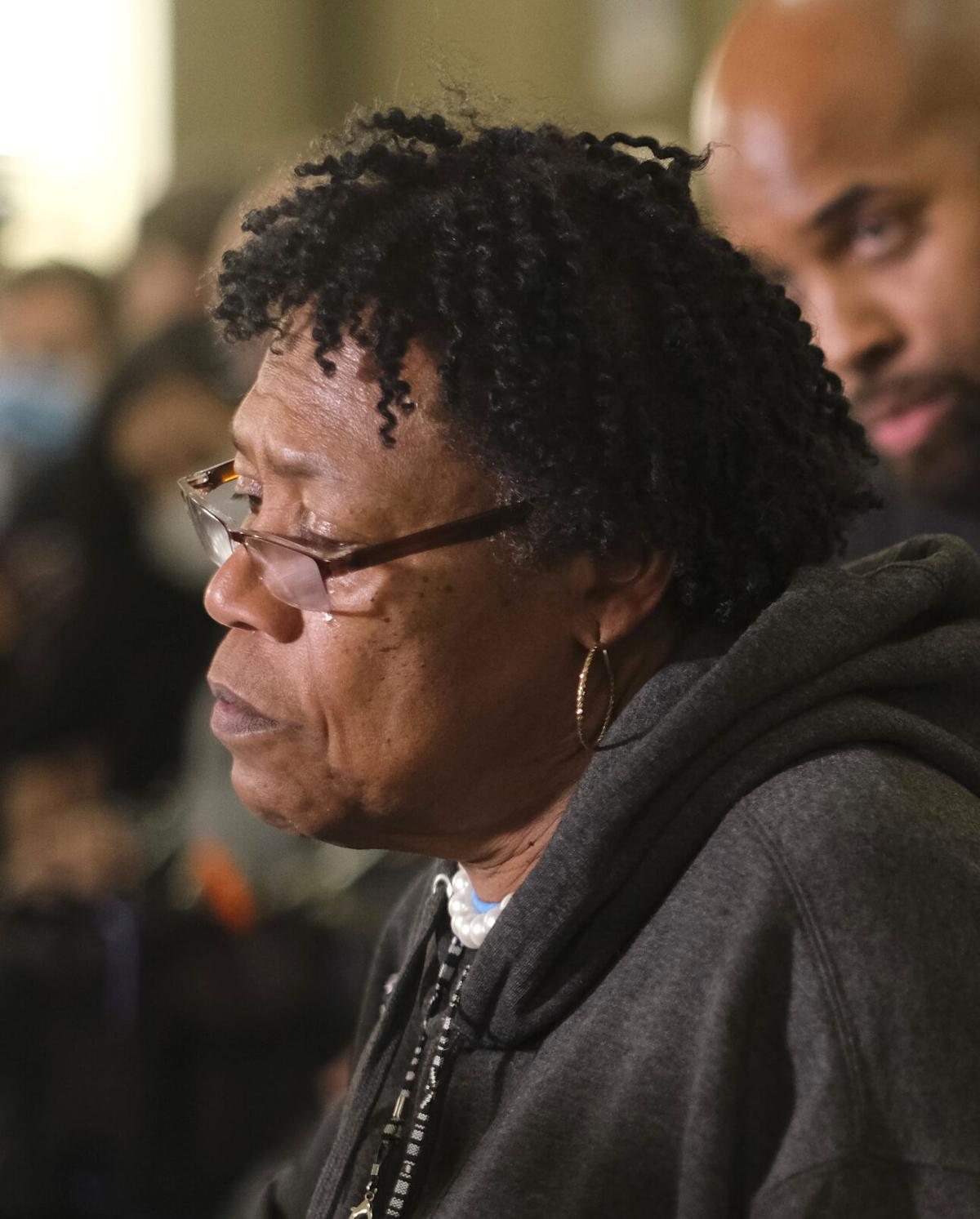 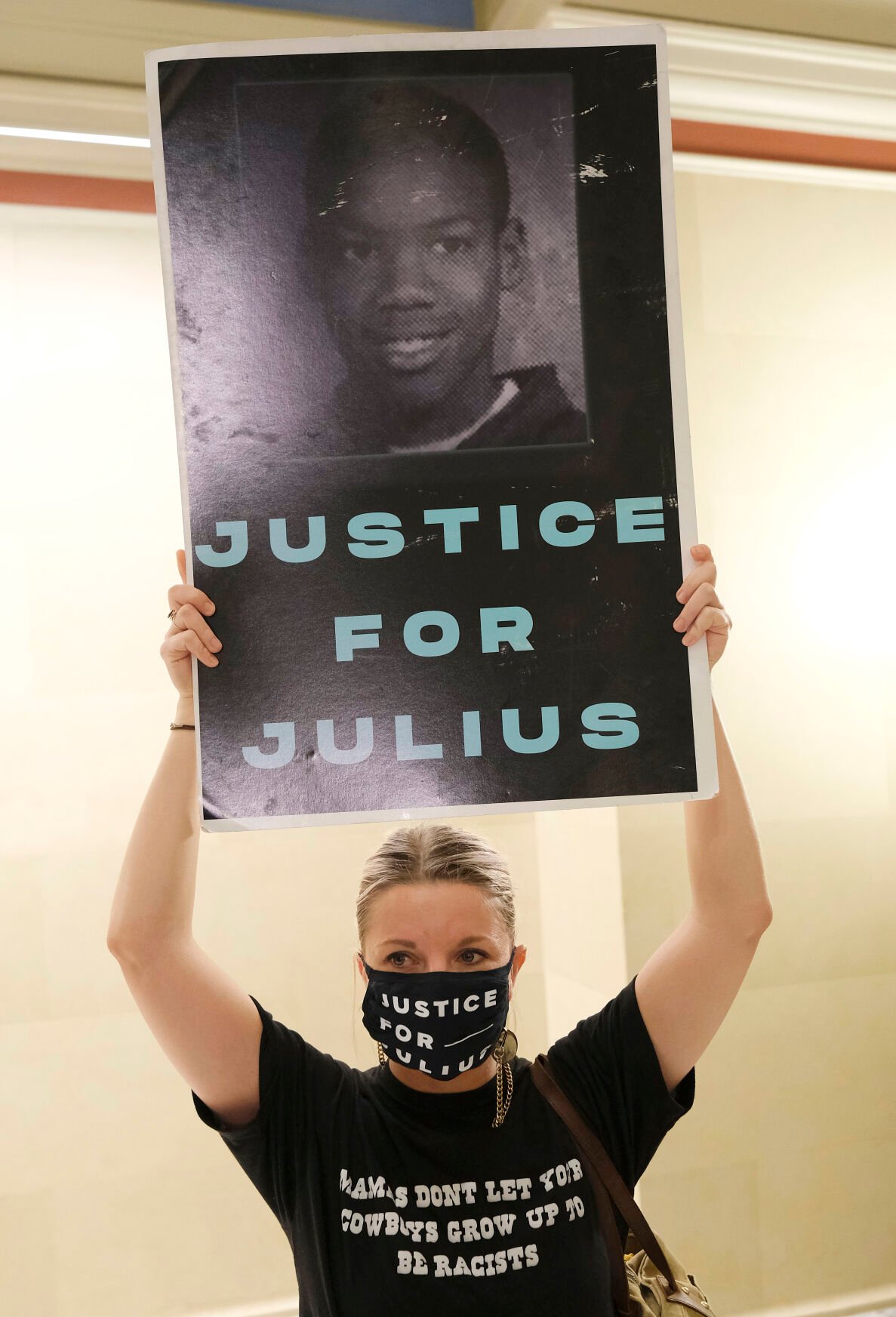 Kellie Mogg holds a sign in support of Julius Jones as Madeline Davis-Jones and other family members and friends of Jones address the media at the Capitol about Jones' scheduled execution on Wednesday, Nov. 17, 2021, in Oklahoma City. 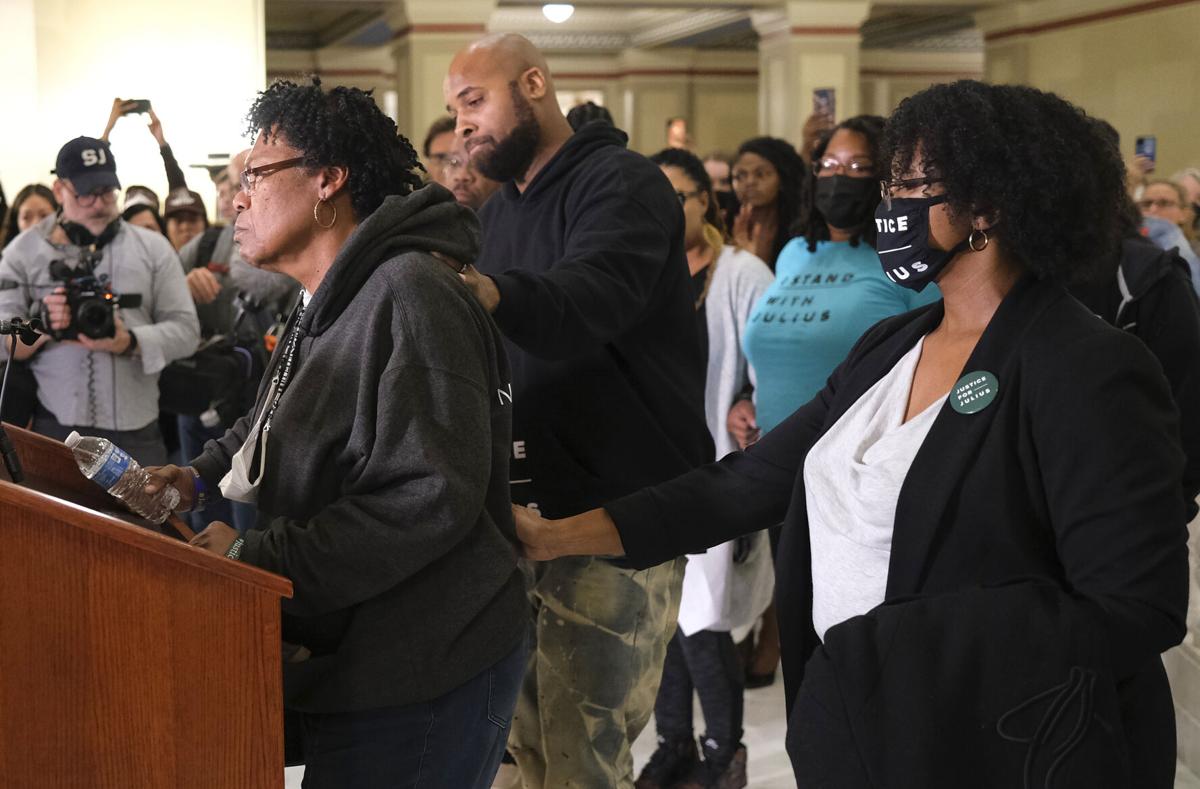 Madeline Davis-Jones (at podium) and other family members and friends of death row inmate Julius Jones, address the media at the Capitol about Jones' scheduled execution on Wednesday, Nov. 17, 2021, in Oklahoma City.

Kellie Mogg holds a sign in support of Julius Jones as Madeline Davis-Jones and other family members and friends of Jones address the media at the Capitol about Jones' scheduled execution on Wednesday, Nov. 17, 2021, in Oklahoma City.

Madeline Davis-Jones (at podium) and other family members and friends of death row inmate Julius Jones, address the media at the Capitol about Jones' scheduled execution on Wednesday, Nov. 17, 2021, in Oklahoma City.

Instead of facing death by lethal injection, Jones instead will spend the rest of his life in prison without the possibility of parole. Stitt also ordered that Jones never be eligible to apply for or be considered for a commutation, pardon or parole.

“After prayerful consideration and reviewing materials presented by all sides of this case, I have determined to commute Julius Jones’ sentence to life imprisonment without the possibility of parole,” Stitt said in a statement.

Stitt did not say what led him to commute Jones’ sentence or whether he believed the claims pressed by Jones’ supporters that he’s innocent of the murder of 45-year-old insurance executive Paul Howell.

For most of the week, Stitt’s staff had said the Republican was praying, following a recommendation earlier this month by the state’s Pardon and Parole Board that Jones’ sentence should be commuted to life with the possibility of parole because of concerns about the evidence. Jones has always maintained he is innocent and was framed by a friend who was a co-defendant and testified against him.

In a related executive order issued Thursday, Stitt said nothing gives the Pardon and Parole Board the authority to recommend that a death sentence be commuted to life with the possibility of parole, and the state Constitution and other laws also don’t give Stitt the authority to grant any such recommendation. The Pardon and Parole Board’s rules prevent Jones, 41, from again re-applying for commutation for the same offense following a favorable action from the governor.

The family of Paul Howell, in a statement on Facebook, said: “We know Governor Stitt had a difficult decision to make. We take comfort that his decision affirmed the guilt of Julius Jones and that he shall not be eligible to apply for, or be considered for, a commutation, pardon or parole for the remainder of his life.”

Cheers echoed through the Capitol as news spread among nearly 100 Jones’ supporters who were holding vigil for a fourth day outside the Governor’s Office, hoping to sway Stitt’s decision. For two days, thousands of students across the region had walked out of class, and authorities in Oklahoma City had been bracing for protests.

Melanie Fish, of Spencer, who had joined the vigil off-and-on outside the Governor’s Office at the Capitol for four days, said she was “shocked” by Stitt’s clemency decision. She said she thought Stitt would permit the execution to proceed, then disappear while the sentence was carried out.

Fish said she’d last talked to Jones on Saturday night about the University of Oklahoma football team’s loss. She said Jones wanted the day to come where he would not be executed.

“We really thought he was gonna die today,” Fish said. “We were prepared for that. I know that sounds dark and bleak, but it’s Oklahoma. We are where we are.”

Jones had been scheduled to die for the 1999 death of Howell, who was shot in the head during a carjacking in the driveway of his parents’ home in Edmond.

Prosecutors have long contended the right man was convicted in Howell’s killing. In a statement Thursday, Attorney General John O’Connor said he knows Stitt is making “what he believes is the right decision” and he appreciates the condition that Jones never be released from prison.

“However, we are greatly disappointed that after 22 years, four appeals, including the review of 13 appellate judges, the work of investigators, prosecutors, jurors and the trial judge have been set aside,” O’Connor said.

He also said his office will continue to work for the justice and safety of all Oklahomans, including families such as Howell’s.

“We recognize that the pain of losing a loved one never ends, and our hearts and prayers are with the Howell family,” O’Connor said.

State Rep. Kevin McDugle, R-Broken Arrow, a death penalty supporter who had been advocating for clemency because he believed there was doubt in Jones’ case, said it was evident that Stitt had “the weight of the world on his shoulders,” but with all the information available, he probably made the best decision.

“I don’t know that either side will really be happy with that decision,” McDugle said. “But at the same time with the information he had, I think it’s evident that he thought that he was guilty, but I don’t know. It’s tough. I would hate to be in that position.”

He said some Jones supporters believed him to be 100% innocent while the Howell family wanted to see Jones executed. Madeline Davis-Jones, Julius’ mother, said in a statement: “For over 20 years, I have been haunted by the idea of watching my baby boy die in an execution chamber ... I am grateful that after today’s decision by the governor that can no longer happen. I still believe that every day Julius spends behind bars is an injustice, and I will never stop speaking out for him or fighting to free him. But today is a good day, and I am thankful to Gov. Stitt for that.”

In a statement, Amanda Bass, a Jones attorney, said Stitt took an important step in restoring public faith in the criminal justice system.

“While we had hoped the governor would adopt the board’s recommendation in full by commuting Julius’s sentence to life with the possibility of parole in light of the overwhelming evidence of Julius’s innocence, we are grateful that the governor has prevented an irreparable mistake,” she said.

State Rep. Monroe Nichols, D-Tulsa, vice chair of the Oklahoma Legislative Black Caucus, and a staunch Jones advocate, said he’d had confidence early on that Stitt would grant clemency in part because of Stitt’s Christian faith. But, Nichols said his confidence began to wane a little bit as time went on.

“I wish he would have made it a lot sooner because of the trauma that I know it has caused and continues to cause the Howell family, the Jones family alike, but I was pleased with the decision that he ultimately made,” Nichols said.

The case for clemency also drew Republican supporters, including state Rep. Logan Phillips, R-Mounds, who said he is usually a death penalty supporter.

“I think it was the right decision,” he said. “The reality is that there was doubt, and under no circumstances can the state ever make the mistake of killing somebody incorrectly. It just can’t be done and removes all faith in many of our systems.”

Jones’ cause also drew support from anti-death penalty advocates and celebrities including Kim Kardashian West and athletes such as Baker Mayfield and Stephen Curry. Jones also was the subject of a multi-part ABC documentary that ran in 2018.

There have been 113 state executions in Oklahoma since 1990, according to the Death Penalty Information Center. Clemencies, while rare, are not unheard of in Oklahoma. Records show that former Republican Gov. Frank Keating granted one in 2001, and former Democrat Gov. Brad Henry granted a total of three — in 2004, 2008, and 2010. The four men who received clemency were each ordered to serve life without the possibility of parole.

Last month, Oklahoma resumed executions after a nearly seven-year hiatus stemming from a series of executions that stemmed from its lethal injection methods and the drugs used.

Copyright 2021 The Associated Press. All rights reserved. This material may not be published, broadcast, rewritten or redistributed without permission.