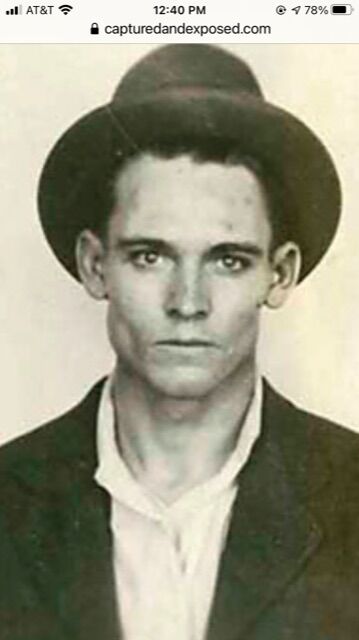 Lawrence DeVol was the last of the Depression-era gangster killers. 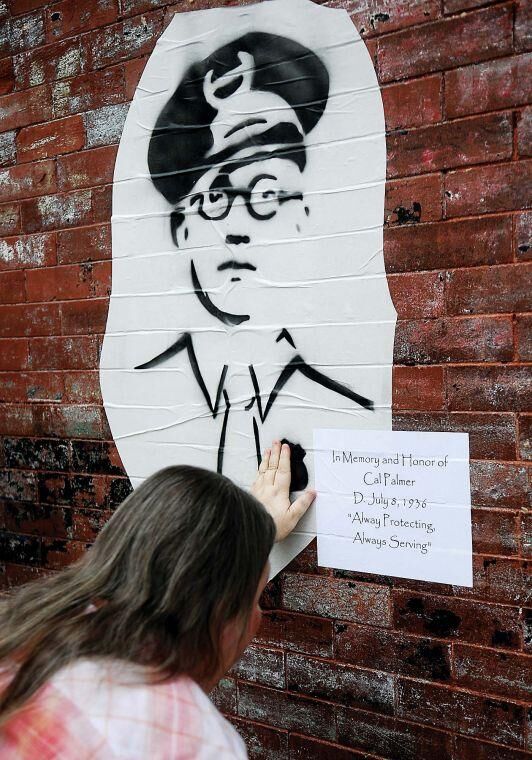 Enid, in July 1936, recorded the hottest temperatures ever in Oklahoma.

Frank Gray, who’s Fillin’ Station was on south Highway 81, would gladly tell you that for 10 straight days the temperature was above 110 degrees. One day Enid was the hottest spot in the nation with 114 degrees, which was before air conditioning.

The brand new Enid Ice and Fuel company opened at Cherokee and Independence. It was a large plant putting out 90 tons of ice a day in this drought. Enid was still reeling from the Dust Bowl and the Great Depression. Frank talked about the enormous number of transients walking down the highway carrying knapsacks, willing to work for food.

But, it was a hopeful presidential election year with Franklin D. Roosevelt squaring off against Kansas neighbor, Alf Landon. Enid’s newest newspaper, “The Camel’s Calf,” was a weekly published by the young prohibitionists club.

Public Enemies like John Dillinger, Bonnie and Clyde and Pretty Boy Floyd were all dead. Ma Barker and her son, Fred, were killed by the FBI the year before.

Sadly, however, the lawmen had missed killing the psychotic criminally insane triggerman of the Barker-Karpis gang — Lawrence DeVol.

In trouble at an early age

DeVol was born in Ohio on Nov. 17, 1903, moving with his family to Tulsa. He was a troublemaker from an early age.

At age 9, he was sent to the reformatory at Brownsville, Texas. At 11, he was sent to the Oklahoma State Training School for incorrigible boys. He eventually emerged as a member of the Tulsa Central Park Gang with Barker brothers Freddie, Lloyd and Arthur. He teamed up with Harvey Bailey to rob $70,00 from a bank in Vinton, Iowa, and $250,000 from a bank in Washington Court House, Ohio.

He joined Frank “Jelly” Nash to rob a bank in Lincoln, Neb., of $2.5 million. He did robberies, burglaries, and safe crackings too numerous to mention. He was a contract killer and suspected in many murders.

In 1930, two businessmen had traveled to Muskogee to recover money on mortgages, but were later found dead. The assumption was the mortgage holders had hired DeVol to silence them.

In Hannibal, Mo., two officers, John Rose and George Scrivens, had approached DeVol. He left them dying on the street. He killed two different bootleggers who didn’t obey the booze monopoly, beat up a speakeasy owner and attempted to murder a sheriff.

He then joined the Barker-Karpis gang, whom he knew from Tulsa. In 1932, they robbed $226,500 from a Minneapolis bank, $47,000 from a Fort Scott, Kan., bank and $250,000 from a bank in Concordia, Kan. Their car was modified with armor to deflect bullets and had a rear-facing seat for the crooks to fire at any chasers. They held up a bank in Minneapolis, and as officers Leo Gorski and Ira Evans drove up in their patrol car, at 15 feet away, DeVol opened up with his machine gun. Neither officer had a chance.

DeVol had become a nationwide police target. He was soon captured in St. Paul running around completely drunk wearing a big fur coat and waving his gun. The officer hit him over the head with a gun to knock him out. The police had no idea who they had until they checked his prints. He was put in the state penitentiary in solitary confinement and, finally, he was placed in St. Peter’s Hospital for the Criminally Insane.

However, on June 6, 1936, he organized an escape for himself and 15 other insane criminals. A nationwide search for DeVol began.

Officer Cal Palmer, a native of Canton, was a big, jovial man with a ready smile. He had been an Enid policeman for two years, coming from Fairview, where he had been a Major County deputy sheriff. The heat was really bothering him. He just didn’t feel well. Officer Bert Utsler offered to work for him, but he declined. He said he would feel better when the sun went down.

Palmer returned to duty at 4 p.m. on Wednesday, July 8, 1936. There was notification of banks being robbed recently by two men in Attica, Little River and Turon, Kan.

Jim O’Neal, a former police officer, was operating the German Village beer parlor downtown at the corner of Broadway and Grand. Around 11 p.m., a man came in and took a seat in a front booth. A girl from outside the bar joined him. Jim kept an eye on the man as he felt like he had seen the man in some pictures. He called the police to come check him out.

Soon Officer Palmer and his partner, Officer Ralph Knarr, entered the bar. They visited with O’Neal before approaching the booth where the man was seated. Neither officer had a clue they were approaching Lawrence DeVol.

DeVol and his fellow escapee, Donald Reeder, had been using Enid as a base as they robbed banks in Kansas with the Crawley County bank at Concordia set for robbing the next week. Mr. and Mrs. J.W. Edwards were just behind Officer Palmer as he asked the man to come and go with them.

The stranger said, “I think I know what you want me for. May I finish my beer first?”

Palmer agreed. DeVol finished the stein of beer and sat it down on the table and with the same movement, had a gun in his hand and opened fire at point blank range. Palmer fell first, hit with three bullets, the fatal one going into his heart and killing him instantly. Knarr fell next, hit four times in the neck, shoulder, arm and abdomen. Mr. Edwards was next, being hit in the leg by a stray bullet.

DeVol ran out the side door of the bar to the north. He ran into the alley next to the Broadway Tower and raced up the alley toward Randolph Street, pursued by Night Chief Lelon Coyle and Officers Ted Roberts, Phil Swyer, Earle Moore and Carl Bundren. Near the Max and Rex Café at the end of the alley, DeVol jumped into the rear seat of a parked car with Fred Caldwell and Dr. L.D. Huff in the front. He told Caldwell, “Get going quick.” Caldwell put the car in gear moving forward and saw all the police coming toward him with guns pointing at his car.

Coyle had a finger shot off. In retaliatory fire, DeVol was shot nine times with one being a shot to the head, killing him instantly. It was either Officer Coyle or Roberts who fired the fatal shot.

Last Depression-era killer goneThe last killer of the Depression era was gone. The Enid newspaper read, “The officers had triumphed in a bloody battle, but paid a costly price.” The murder of Palmer was a shock to everyone and a sad silence hung in the air. Palmer, age 38, left a wife, Mary, and two sons Daryl, 15, and J.G., 12.

Officer Knarr was in critical condition in the hospital.

Donald Reeder was arrested quickly by officers Roberts, Moore and Bundren after C.C. Gibson notified police he saw Reeder enter a hotel. DeVol and Reeder had been changing hotels between the Oxford Hotel and the Highway Hotel, which were close to the downtown square. The police found the car DeVol and Reeder used containing a sawed-off shotgun, two rifles, a bag with $250 silver and other stolen merchandise. The license tag matched the car used at the Turon, Kan., bank robbery. Other loot was recovered at their hotel room plus the $110 removed from DeVol.

It was one of Enid’s police force finest hours. They had quickly reacted to the cold-blooded murder of Officer Powell by killing the gangster in an attempted arrest, arresting his partner, finding their car used in bank robberies and the loot in the hotel room plus their lady friends — all in under two hours. Their actions saved many lives and prevented bank robberies.

Reeder sang like a songbird to Arthur Strauss of the Enid Daily Eagle about their bank robberies in Kansas at Attica, Little River and Turon as he was trying to get a life sentence in Kansas for bank robbery, not a death sentence for murder. Strauss’s article got picked up by the Associated Press nationwide.

Cal Palmer’s funeral was held the afternoon of July 10, 1936, at Henninger Funeral Home. Hundreds attended to honor the Palmer family and hear Rev. S.P. Gaskins preach. Special music was by the Mennonite quartet of Fairview. Burial with honors was in Memorial Park Cemetery. Mayor John J. Allen announced that all reward money for DeVol and Reeder would be given to Mary, the widow of Officer Palmer. County Attorney Roy Holbird filed a petition in district court for a court order to close the German Village Beer Parlor.

Kansas authorities brought Maxine Hilliard and Mildred Smith, who had been kidnapped by the Attica bank robbers, to see Reeder and view DeVol. They identified them as their kidnappers and bank robbers. The body of DeVol was sent to St. Paul, Minn., to be cremated. Donald Reeder was arraigned in Wichita Federal Court with officials seeking the death penalty, a life sentence for the bank robberies and a life sentence as a habitual criminal. Almeda Fathergale, the companion of DeVol at the beer parlor, was taken to the Tecumseh Institution for Delinquents. Juanita Hunsaker, who was with Reeder, was released to her parents in Rolla, Kan.

Officer Ralph Knarr was expected to recover fully. J.W. Edwards’ flesh wound to the leg was mending well, as was the finger of Officer Coyle. Knarr went on to become the chief of the police in Enid from 1943 until 1956.

In September 2018, Annie Sumner, great-granddaughter of Officer Palmer, came with several generations of Palmer’s family to present to the Enid Police Department the .38-cal. Smith and Wesson with pearl grips pistol that Palmer carried the night he was killed.

Chief Brian O’Rourke said, “It’s invaluable for us to have this. It’s a piece of our history. We appreciate it. Palmer has never been forgotten. Outside the station is a marble memorial telling his story. The hallways of the department have several pictures of Palmer. Officers place flowers at his grave each year.”

Palmer’s gun is displayed in the lobby of the Enid Police Department.

A tip of the hat to Enid Police Department, especially Capt. Bryan Skaggs, Aaron Preston, archivist at the Cherokee Strip Regional Heritage Center, and Sarah Cariker at the Public Library of Enid and Garfield County for all their help.