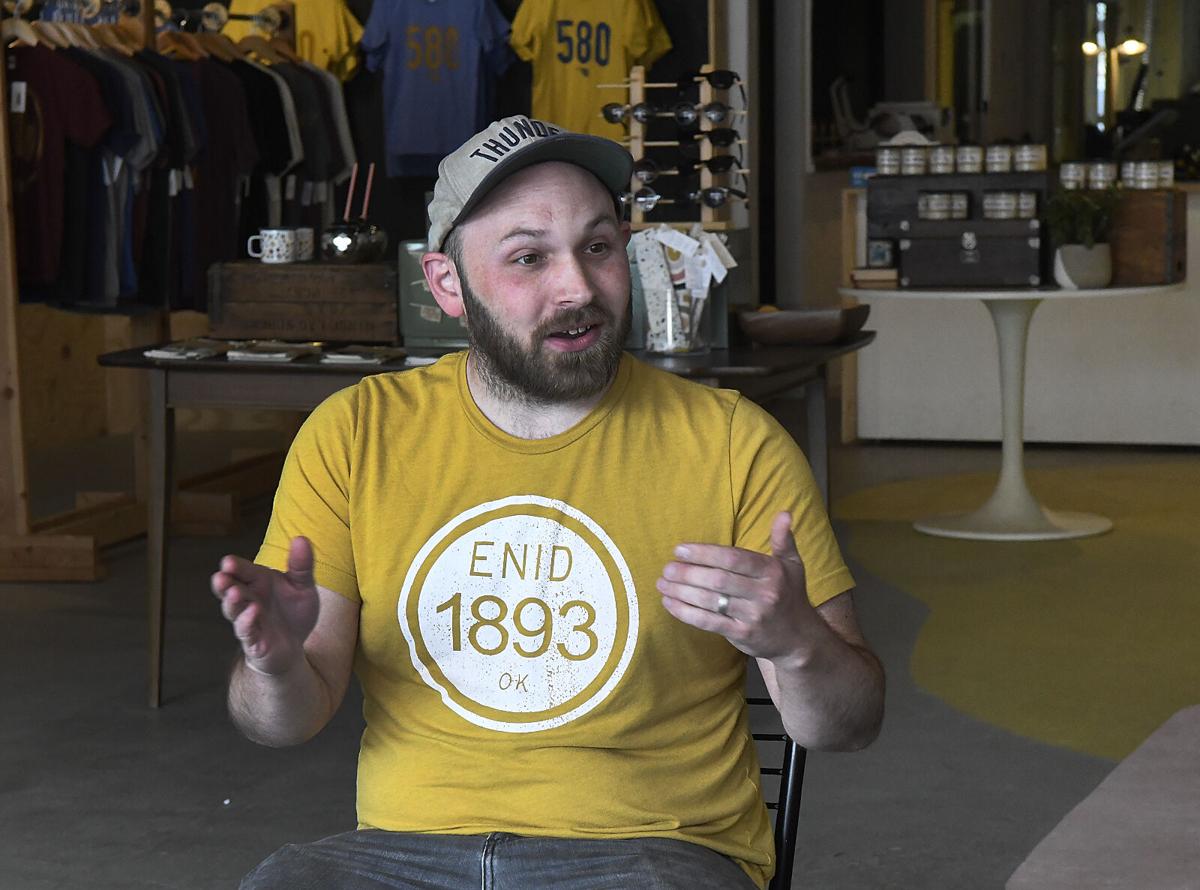 Riley Jantzen gestures during an interview Tuesday on the closing of the retail store The Felt Bird. (Billy Hefton / Enid News & Eagle) 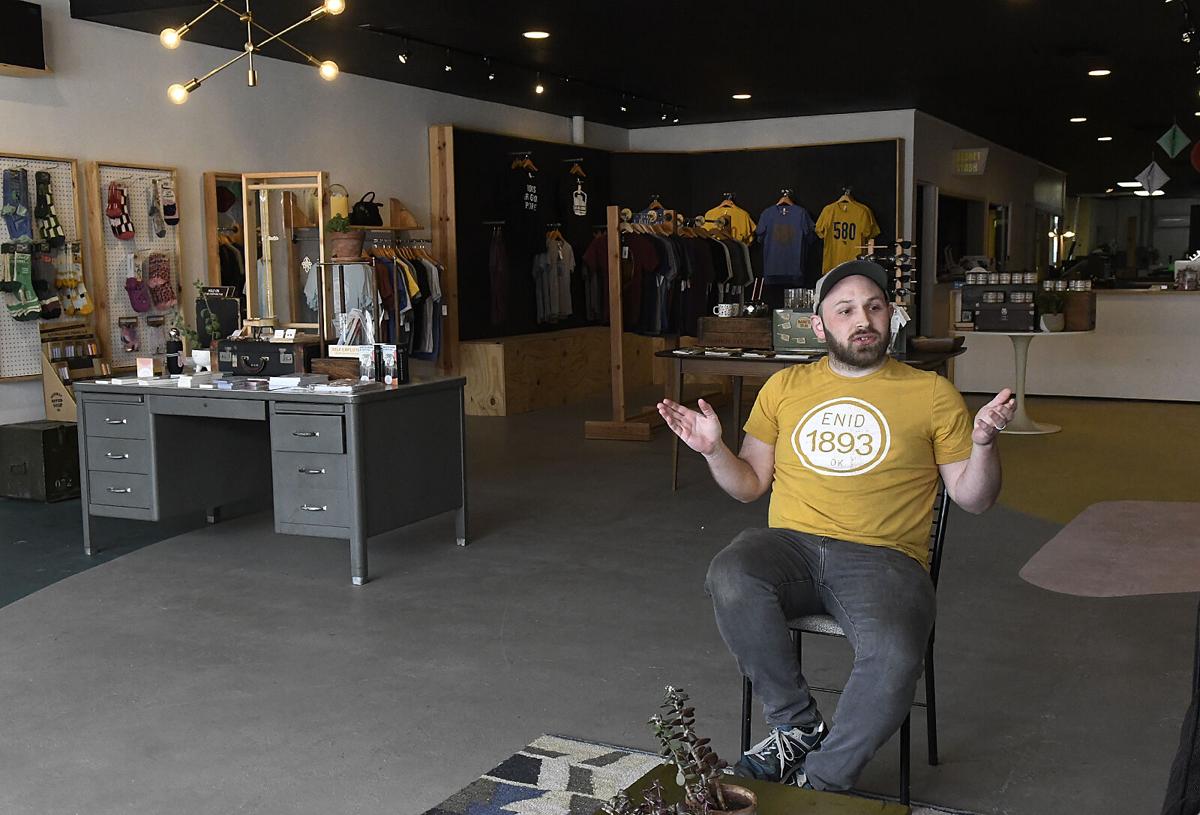 Riley Jantzen gestures during an interview Tuesday on the closing of the retail store The Felt Bird. (Billy Hefton / Enid News & Eagle)

ENID, Okla. — After almost 12 years of selling T-shirts, candles, handmade items and more that are unique to Enid, The Felt Bird is locking its doors.

Hey Felt Friends! First off, you are all amazing and have blown us away with your support over the past 11 years, but...

Riley Jantzen, the owner of The Felt Bird, announced in a Facebook post that he and his wife Stela had decided to close the business by the end of the month and said he’s feeling “good” about the decision.

“I literally wouldn’t change a single thing that we did,” Riley Jantzen said. “I feel like we’re very much community-oriented people, and I feel like we’re leaving the community better than we found it ... Not that we can take all the credit for it, but I feel like we were able to help contribute to that culture.”

Stela Jantzen became executive director of Park Avenue Thrift about a year and a half ago, where she is “killing it,” Riley Jantzen said. Following that, he took over the business exclusively.

Now, Riley Jantzen wants to spend more time focusing on his work as a freelance graphic designer and marketer.

The Felt Bird, which was called Stela Bird before its physical opening, got its start after Stela Jantzen had begun making felt birds for an Etsy shop, which blossomed into participating in craft shows and getting into different boutiques across the country.

Opening day for the retail store at its first location, 124 E. Broadway, was Sept. 4, 2009, which happened to be the same day as one of Enid’s First Friday events.

Riley Jantzen said the couple didn’t know how they were going to pull it off, but they were confident in The Felt Bird, and they spent the whole day running around, figuring it out and solving problems.

He said it felt like they went from not existing to “throwing a giant party” that day.

“After that night, we knew we had done the right thing,” Riley Jantzen said. “Nobody had really done what we were doing here before, so we didn’t really know how people were going to react to it ... That told us we did the right thing by opening.”

Throughout the years, The Felt Bird relocated twice, though it always remained in the downtown area, a place the Jantzens loved and wanted to be a part.

In 2013, the gift shop moved from 124 E. Broadway to 124 S. Independence, a space the Jantzens shared with Scribners Gallery.

On March 13, 2020, just before the COVID-19 pandemic hit, The Felt Bird moved to its current location at 222 W. Randolph and was open for a few days before it closed due to shutdown orders.

Riley Jantzen credited the store’s survival through the pandemic because of loyal customers, and The Felt Bird was also “mobbed” as part of the Facebook group Enid Cash Mob, whose main purpose was to buy from local businesses during the pandemic to support them.

One of the best parts about running his own business has been having control over his own life and to be his own boss, but beyond that, meeting so many “awesome” people has been rewarding.

“We’ve always kind of felt like — especially whenever we were on Independence ... We would get a lot of people who would come to us, and we would end up giving them a guide to the city, basically, answering any questions, and we almost felt like we were like a second visitors center.

The key to The Felt Bird’s success, Riley Jantzen said, has been the ability to adapt.

“If you saw us whenever we were on Broadway versus now — we’re literally a different store,” he said. “I think it’s just because we started really young, but we just let the business grow and evolve as we grew and evolved.”

During the pandemic, Riley Jantzen said he began to realize he loved being able to finish things with his design work and that with retail, it’s a “never-ending project.”

“I haven’t been bored in 10 years — I’d love to be bored, eventually, for a couple of hours,” he said with a laugh.

When it came time to restock the store after a “really good” Christmas season, Riley Jantzen said it felt like a task.

“This shouldn’t feel like a task,” Riley Jantzen said. “You have to be passionate to do this well, and you have to love what you’re doing, and ... I’ve decided that I love creating things more than I like buying and selling things.”

The Felt Bird still will be around as a brand instead of a place, Riley Jantzen said, and may make appearances as a vendor at local events, but its last day in its downtown space will be April 28.

On Thursday, April 15, all the merchandise in the shop will be 25% off, and the following week on April 21, anything remaining will be 50% off for a week before its last day.

After the last day, Riley Jantzen said the online website still will be open for anything left, and in May, the store will open with more products online.

The Jantzens, who have a 5-year-old son, are looking forward to what’s next in their lives and said that closing is a bittersweet moment.

“‘I’m really glad that we’re able to do this because I want to and not because we have to,” he said. “Really, you couldn’t ask for better than that.”

KIOWA — The services celebrating and honoring the life of Helen Day, of Kiowa, Kansas, are pending under the direction of Brown-Cummings Funeral Home. Condolences may be shared online at www.Brown-Cummings.com.