ENID, Okla. — At least three staff members were terminated from The Commons in late June following an investigation after several complaints were reported to Oklahoma State Department of Health. 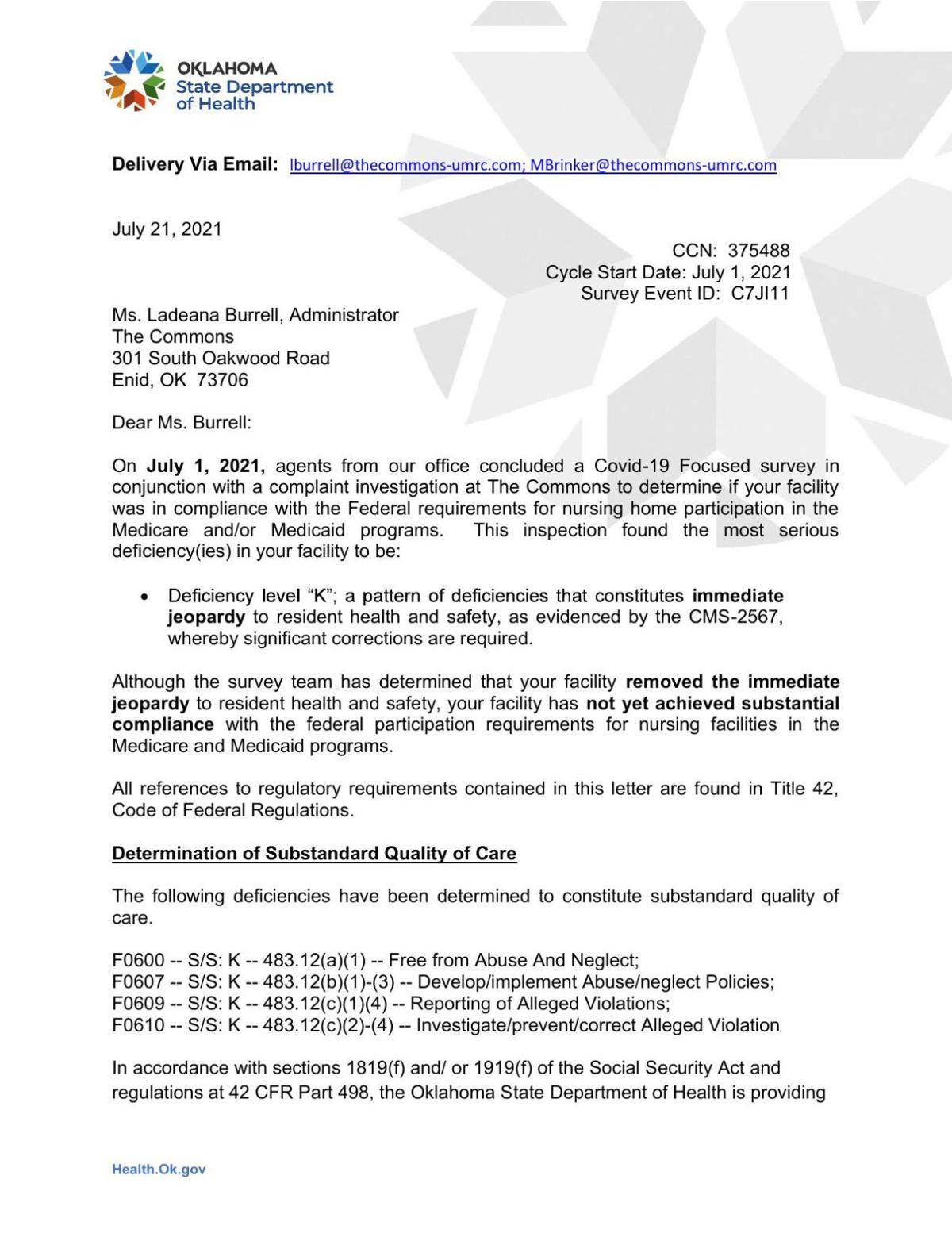 OSDH conducted a COVID-19 Focused Survey in conjunction with a complaint investigation from June 21-25 and from June 28 through July 1 to “determine if the facility was in compliance with Federal requirements related to the complaint and implementing proper infection prevention and control practices to prevent the development and transmission of COVID-19,” according to survey documents from OSDH.

OSDH found the most serious deficiency in the facility to be level “K,” which is a pattern of deficiencies that constitutes “immediate jeopardy to resident health and safety,” according to the documents.

On June 25, the immediate jeopardy situation was determined to exist related to OSDH’s findings, which concluded that The Commons failed to ensure residents are free from abuse and neglect; failed to implement abuse policy; failed to report allegations of abuse; failed to thoroughly investigate allegations of abuse; failed to protect residents from further potential abuse during investigation; and failed to have effective administration to prevent abuse and implement abuse program, according to Paula Terrel, manager of survey with Long Term Care Service.

The immediate jeopardy deficiency was lifted on June 30 when all elements of the PoR and the amended PoR had been implemented.

According to the OSDH document, a staff member alleged that a licensed practical nurse had been refusing/withholding pain medications to a resident, and the allegation was not reported in a timely manner to the administrator and a thorough investigation was not conducted.

The employee remained working during the investigation, and no action was taken against the LPN.

An allegation of a staff member being verbally abusive to a resident on Feb. 22 was not reported until the next day, and according to the OSDH document, “the residents were not protected as the staff member was allowed to work.”

The Commons documented an incident of another resident being physically abused by staff, which was witnessed and reported by staff. OSDH documents said the facility “failed to protect the resident, complete a thorough investigation and implement corrected measures to prevent further abuse.”

Another resident made an allegation of rape by staff around 11:15 p.m. on June 27 after the resident began saying there were bed bugs in her bed.

Two staff members checked the bed and found no sign of bugs, according to the document.

The resident then said she had been raped every 30 minutes by 50 people. Staff were informed to not go into the resident’s room alone, and the administrator said she told the nurse to get a description of what the person looked like. The nurse reported to her that the resident stated the description was “looks like us,” and the report documented the resident was unable to describe the perpetrator.

An OSDH incident report dated June 27 documented that no signs/symptoms of physical rape were noted.

According to the document, the administrator told OSDH that policy for protecting residents for allegations of abuse was to immediately remove and suspend employees; however, the two employees had been allowed to continue to work more than six hours after the rape allegation was made.

An allegation of verbal abuse to a resident, which was witnessed by staff and reported by an employee, was not reported to the administrator in a timely manner and a thorough investigation was not conducted.

The residents, the document said, were not protected “due to the perpetrator remaining at work and continued to work while the investigation was ongoing.”

On Feb. 6, one resident had a seizure at 4 a.m. and another at 6:06 a.m., and OSDH said in the document the facility “failed to notify the physician of a change in the resident’s condition” for one of four sampled residents reviewed for notification.

Another employee was terminated June 12 for mistreatment of a resident and violation of The Commons’ social media policy after it was reported the employee recorded and posted a video of a resident tying the staff member’s shoe on her Snapchat story.

Another employee was disciplined and written up for misrepresentation and dishonesty after reporting an incident in July 2020. It was determined by The Commons’ staff that the employee was dishonest about the allegation after watching video footage from the day of the reported incident.

A few employees said they felt like they could not report incidents of allegations of abuse, and in the document, OSDH said “the facility failed to develop an abuse policy and procedure that ensured allegations could be reported with retribution.”

An abuse policy dated Dec. 8, 2020, said allegations shall be reported immediately and that “allegations involving abuse ... must be reported within two hours.” The allegations must be thoroughly investigated and must prevent further potential abuse while the investigation is in progress.

An acceptable PoR was provided to OSDH on June 25, stating that all staff on shift would be educated on updated policy immediately.

“We have reviewed the different types and examples of abuse and will follow our policies that have been updated,” The Commons said in its plan of removal. “We will in-service all staff members on the attached education. We learned that the witness is the person that has reported the incident during the investigation. We learned that to properly assess the resident we must conduct medical, psychosocial, and mental status assessment at the time, and an assessment each shift for 3 days for 9 occurrences.”

The acceptable, amended PoR was provided to OSDH on June 29, which said The Commons’ abuse, neglect and misappropriation investigation policy was updated and that all staff would be required to complete in-service.

“To always protect our residents, the INCIDENT response team will meet to collaborate and respond to allegations to ensure all thorough investigation has been completed,” the document said.

OSDH sent a letter dated July 21 to Burrell, stating that the following deficiencies had been determined to constitute a substandard quality of care: free from abuse and neglect; develop/implement abuse/neglect policies; reporting of alleged violations; and investigate/prevent/correct alleged violation.

The Commons was required to submit an acceptable plan of correction (PoC) within 10 calendar days of the receipt of the Form CMS-2567.

The letter also stated that although the immediate jeopardy was removed, the facility had not yet achieved substantial compliance with the federal participation requirements for nursing facilities in the Medicare and Medicaid programs.

OSDH said in the letter it was providing a notice that the Centers for Medicare and Medicaid Services made a determination of substandard quality of care which led to an extended or partially extended survey, which will result in the State withdrawing the facility’s Nurse Aide Training and Certification program for two years.

OSDH said in the letter that the Optional Denial of Payment for New Admissions (ODPNA) will start Aug. 5. The Medicare and Medicaid programs will make no payment for residents admitted on or after the ODPNA effective date, according to the letter.

The ODPNA will continue until the facility achieves substantial compliance or the provider agreement is terminated, and according to the letter, facilities are prohibited from billing Medicare/Medicaid residents or their responsible parties during the denial period for service normally billed to Medicare or Medicaid.

The Enid News & Eagle reached out to The Commons’ administrator last week and on Monday but did not hear back by press time, but The Commons’ Board of Directors President Thomas Sheets reached out via email on July 30 to provide a comment.

“We appreciate your inquiry. We are in the process of reviewing and responding to the matter,” Sheets said in the email. “Resident care and safety is our top priority, and we expect to address all issues in a manner consistent with that priority.”