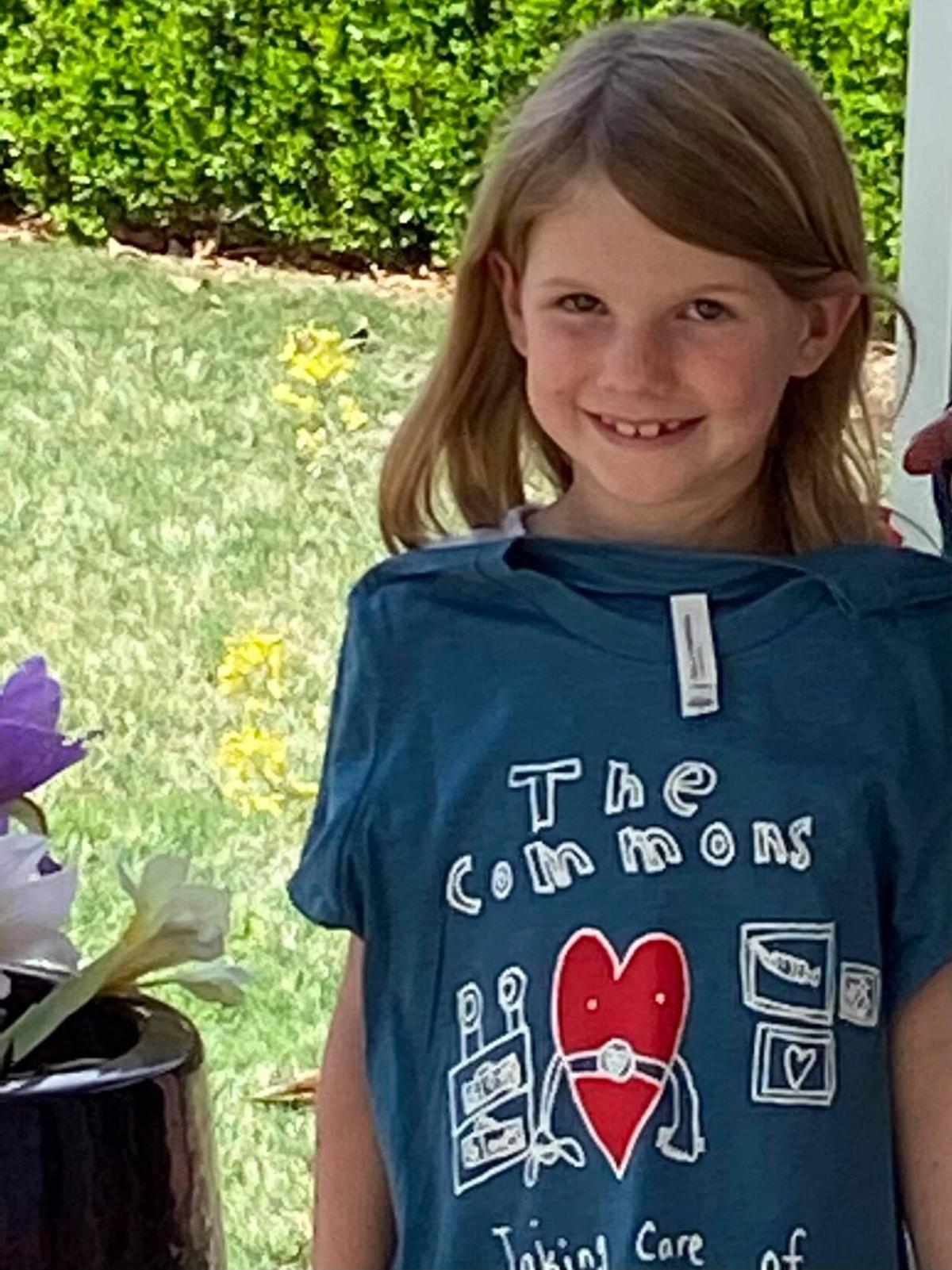 Crosley Frisendahl, a second-grader at Kremlin-Hillsdale Elementary School, holds a T-shirt at The Commons on Friday, April 30, 2021. Frisendahl's design for the News & Eagle's "Design an Ad" contest was chosen for The Commons' annual T-shirt design in honor of National Long Term Care Week. 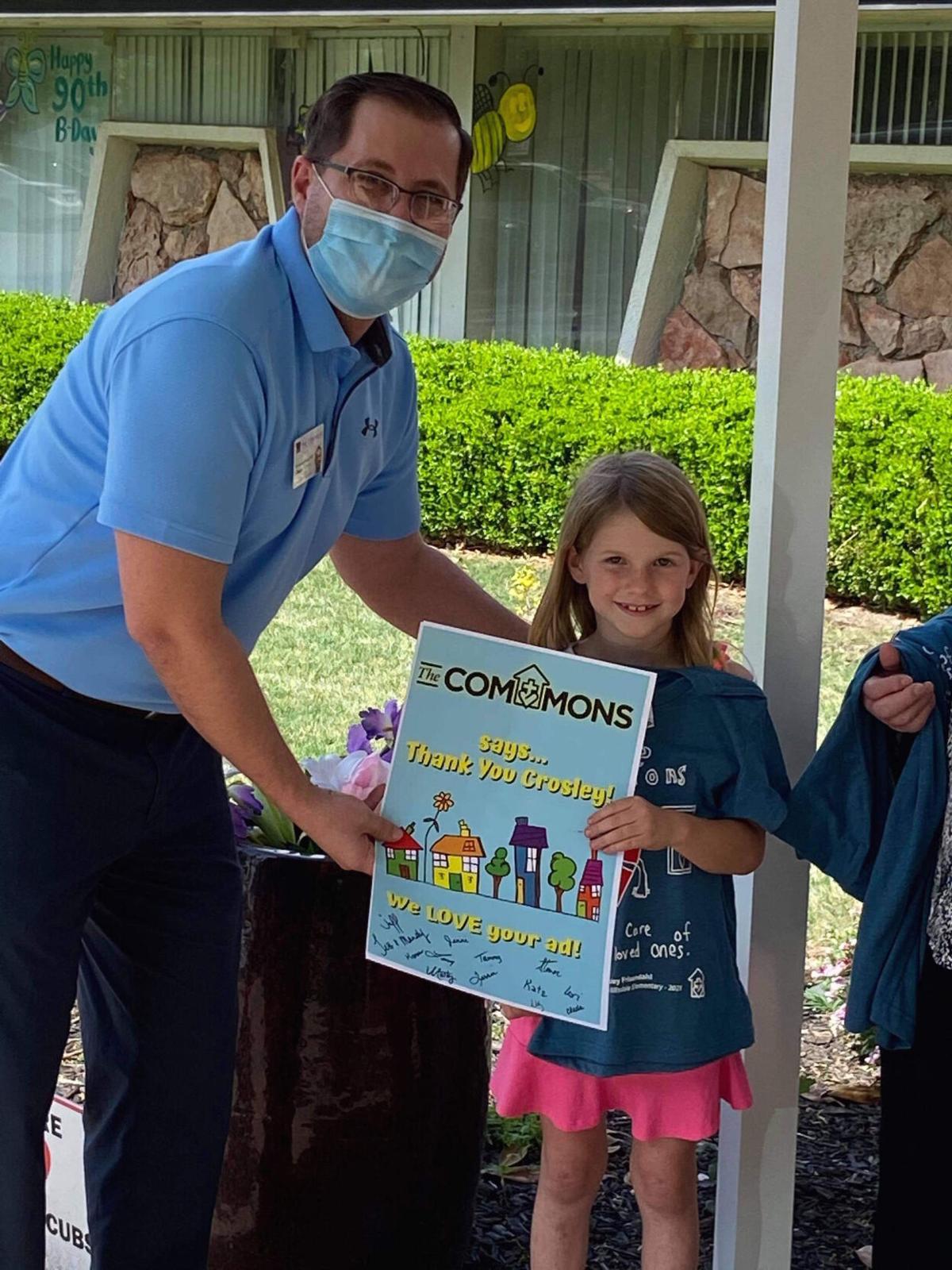 Crosley Frisendahl, a second-grader at Kremlin-Hillsdale Elementary School, holds a T-shirt at The Commons on Friday, April 30, 2021. Frisendahl's design for the News & Eagle's "Design an Ad" contest was chosen for The Commons' annual T-shirt design in honor of National Long Term Care Week.

ENID, Okla. — When Crosley Frisendahl designed an ad for The Commons, she had no idea it would be put on a T-shirt.

The second-grader at Kremlin-Hillsdale Elementary School participated in the Enid News & Eagle’s “Design an Ad” contest and chose The Commons for her ad design, which was inspired by her grandma, Connie Easterly, a nurse at The Commons.

Caregivers “take care of and love people,” Crosley said, so her design has a caregiver drawn as a heart wearing a mask and gloves, with medicine, a syringe and love surround it, with the words “The Commons” above it and “Taking Care of Your Loved Ones” below.

Jeff Jackson, director of community relations at The Commons, said after the past year of COVID-19, what caught his eye the most when he saw the ad was the caregiver.

“That really got me … that in a second-grader’s mind, a nurse or someone that takes care of people — she represented that with a heart, which I just thought was fantastic, and the fact she drew a mask on it is great,” Jackson said.

The Commons then selected Crosley’s ad design to be on its annual T-shirt in honor of National Long Term Care Week, which runs this week through Sunday.

“We were so impressed with Crosley’s ad and the wonderful way she told The Commons’ story that we knew we had to find a way to share it in our community,” Steven Walkingstick, executive director of The Commons, said in a press release. “We are thankful for many families like Connie and Crosley’s that are passing The Commons’ legacy on to the next generation.”

The T-shirt gives credit to Crosley, something her father, Lee Frisendahl, said was “kind” of The Commons to do. He also said as a parent, it was cool to see his daughter’s design selected for the T-shirt.

“She did a good job on the design and did it all on her own,” Lee Frisendahl said.

Typically, Jackson said The Commons usually picks its annual T-shirt with a contest among staff or residents, but after seeing the “phenomenal” job Crosley did, the staff knew instantly that it would be the design for 2021.

Jackson said about 215 staff at The Commons received a T-shirt on Monday, and the retirement community is doing several other activities planned for the week. More activities are being resumed, as well, as COVID-19 restrictions are being lifted, something Jackson said The Commons is excited to begin.

Crosley also got a shirt that she said she proudly wore Friday to school, where she received compliments on it.

“They asked to see it because I was sitting, and then they were like, ‘Did you actually draw that?’” she said.

Crosley said her ad being chosen made her feel happy, but the best part was that her grandma got a T-shirt, too.

“I like how my grandma works (at The Commons), and I like that she got a shirt, too,” she said.