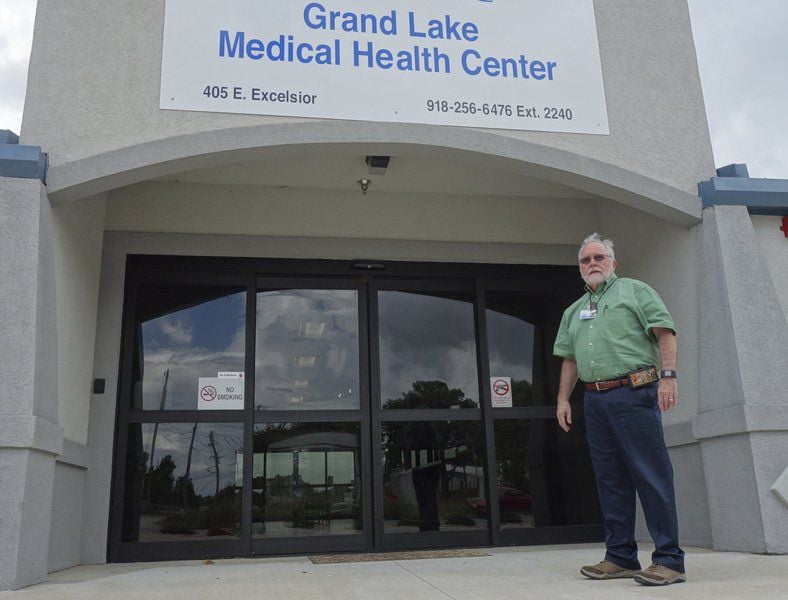 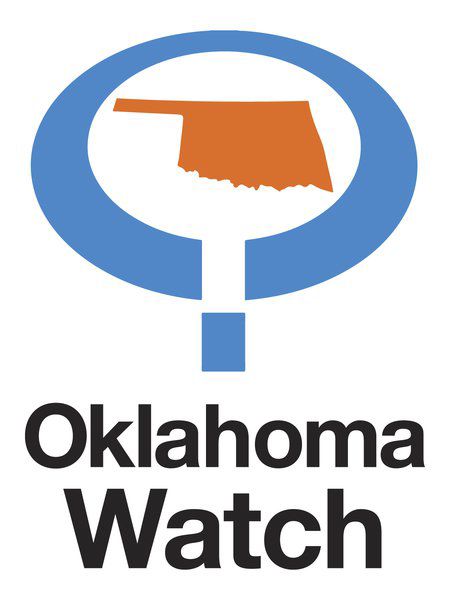 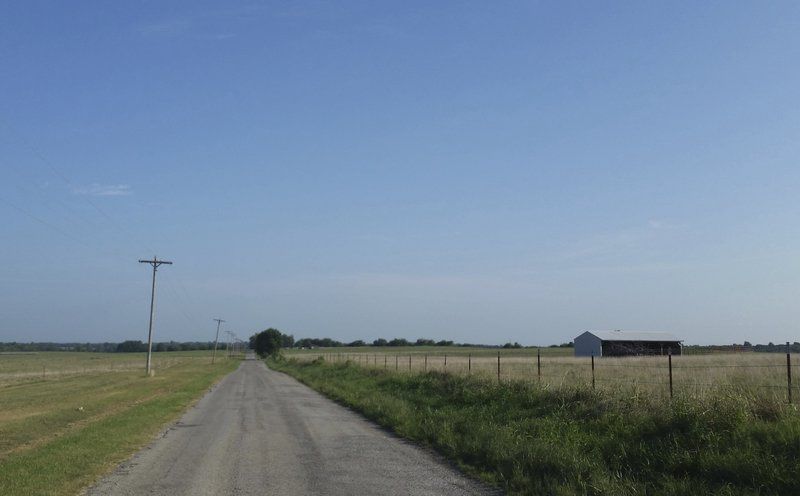 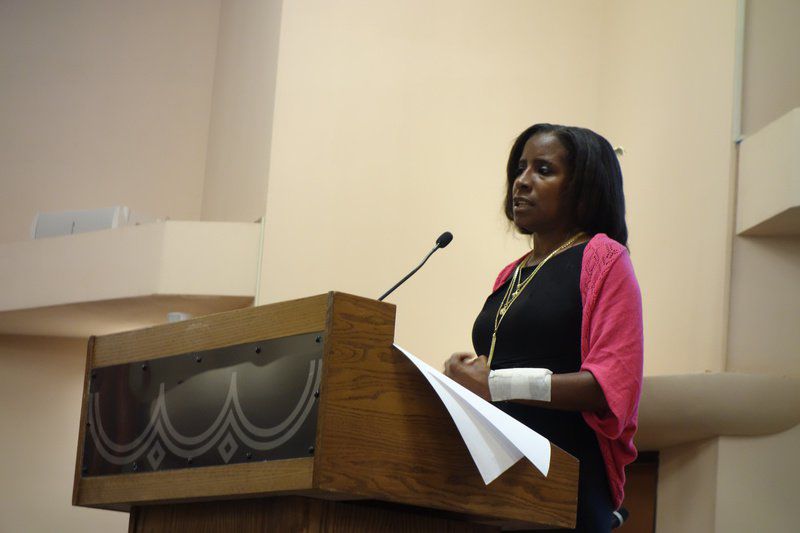 Leah Thompson Carter, of Bartlesville, lost her son to a prescription drug overdose and is afraid she will lose another. Here, she speaks at the Suicide Awareness Summit in Bartlesville in September. (Clifton Adcock / Oklahoma Watch)

Leah Thompson Carter, of Bartlesville, lost her son to a prescription drug overdose and is afraid she will lose another. Here, she speaks at the Suicide Awareness Summit in Bartlesville in September. (Clifton Adcock / Oklahoma Watch)

This story is part of an ongoing series on mental health in rural Oklahoma.

For many Oklahomans, the tug of war between drug addiction and the wait time for treatment can be a one-sided competition: The power of addiction often wins.

Those who lack insurance or cannot pay out of pocket often find themselves on a long waiting list that prioritizes the most severe drug addiction cases. If the person isn’t pregnant or injecting drugs, he or she will not receive state-funded treatment or will be forced to wait, sometimes weeks, until a spot opens up.

The problem is exacerbated in rural areas, where there are fewer drug and alcohol treatment facilities and higher percentages of people who lack the health insurance or cash to get the care.

“Usually, if you’re not an IV drug user, it takes awhile (to get treatment),” said Kim Burns, a clinical social worker at Hugo’s Kiamichi Council on Alcoholism and Other Drug Abuse. “We had a lady (addicted to alcohol) who was just begging. We did get her into a bed, but she had to wait five days, and she has to be clean just to get into the facility.”

That wait time can mean the difference between recovery and falling back into addiction.

“The addicts, they’ve got to get in when they’re motivated,” said Robinson Tolbert, a social worker who helped found the Stigler Health and Wellness Center’s mental health unit. “By the time they can get in, they’ve relapsed and they’re no longer motivated.”

The waiting list for treatment at state-contracted facilities is usually between 600 and 800 people, according to the Oklahoma Department of Mental Health and Substance Abuse Services.

An Oklahoma Watch analysis of data from the Office of the Chief Medical Examiner points to the problem of substance abuse in rural areas.

Among the 10 counties with the highest rates of accidental fatal overdoses in 2014 and 2015, seven are mostly rural, as defined by the federal government. The other three — Muskogee, Stephens and Murray — are commonly considered rural counties.

Most of those same counties also had higher than average rates of suicides, residents reporting frequent mental distress and hospital discharges with a substance abuse-related diagnosis, the data shows.

The risk factors for drug and alcohol abuse are particularly strong in rural Oklahoma, from generational poverty to chronic unemployment.

That helps spawn an attractive market for drug traffickers.

Five years ago, Michael Ginsburg appeared to have overcome a crippling drug addiction and turned his life around.

The classically trained violinist and 2007 Oklahoma fiddle champion moved to the McAlester area in 2010.

A Pennsylvania native, he had been arrested on a drug charge there and then was charged with manslaughter for the overdose deaths of two people to whom he sold heroin in 2005. First he was sent to Narconon, a rehabilitation facility in Canadian, north of McAlester. Then he returned to Pennsylvania and served 2½ years in prison related to the heroin deaths.

He returned to McAlester in 2010 and began working as a Narconon spokesperson. He even started a program called “Take McAlester Back,” with the goal of promoting the arts while discouraging drug use.

“I picked up and used once and it just took that one time to remind me of what it was like and what I enjoyed about it,” Ginsburg said. “All the consequences — I just didn’t think about them.”

Ginsburg began using methamphetamine, oxymorphone and other drugs, all while publicly promoting an anti-drug message.

“I found myself going to drug education programs with the Oklahoma Bureau of Narcotics and I was getting high at the same time,” Ginsburg said. “I had a certain image I felt I had to uphold.”

Finding drugs in McAlester and other parts of Southeastern Oklahoma was not a problem, said Ginsburg, who now lives out of state.

“In McAlester, there are drugs everywhere,” Ginsburg said. “Even if I tried to be clean, people would come knocking on my door or window. Drugs will find you if you step foot into that scene.”

One drug after another

Oklahoma’s rate of drug overdose deaths has been among the highest in the nation in recent years, according to federal data. State Medical Examiner data show that the number of deaths dropped by 5 percent last year, to 823, but health and law enforcement officials are alarmed by a surge in fatal methamphetamine and heroin overdoses.

Washington County, home to Bartlesville, has been especially hard hit by the opioid epidemic, and now heroin is taking a toll. Laws aimed at curbing opioid abuse have caused addicts to shift to heroin, treatment experts say.

“I can tell you heroin is coming, heroin is here,” said Jim Warring, a detective with the Bartlesville Police Department. “It’s here and I think it’s going to make meth look like Christmas.”

But use of meth and opioids remain huge problems in rural areas, said Phil Black, director of development for CREOKS, a community mental health center that serves east central Oklahoma.

“The drug problem in this state is definitely an epidemic,” Black said. “It’s a massive issue, and it permeates all socioeconomic levels.”

Leah Thompson Carter knows the pain of the drug crisis all too well.

On the morning of March 6, the Bartlesville mother went to her son’s bedroom to ask him if he wanted to go to church with her. But when she walked in, she found Michael Thompson in bed, unresponsive.

His death was caused by an overdose of pain medications prescribed to him for polycystic kidney disorder.

Thompson, 24, was a promising athlete and a loving father, but there were signs he was misusing drugs, she said.

Now, Thompson Carter is seeking help for another son who struggles with drug addiction, but finding such treatment is difficult.

“I’ve been asking for help and I can’t find anywhere to get help for him unless he’s a needle user,” Thompson Carter said. “I seek answers so I don’t have to do this again.”

A tangle of reasons

Last year, a drug sweep involving local law enforcement officers and the Oklahoma Bureau of Narcotics and Dangerous Drugs in the town of Clayton, located in Pushmataha County, netted nearly 40 people, or nearly 5 percent of the town’s population.

In several cases, major drug traffickers have set up shop in rural areas to avoid the scrutiny they would otherwise receive in urban areas, Woodward said.

The reasons for high substance-abuse rates in rural areas are complex and intertwined, treatment providers say.

Underlying much of the problem is untreated mental illness.

Combined with a lack of jobs, generational poverty, family environment and even boredom, a shortage of mental-health providers can increase the prevalence of addiction.

In Quinton, a community of around 1,000 in southeast Oklahoma, drugs have become a major problem, said Amanda Needham, a resident who was addicted to meth before going into rehab in Oklahoma City. Pittsburg County, home to Quinton, has posted high fatal overdose rates in recent years.

“It’s easier to find drugs than a job,” Needham said. “When you’re bored, that’s all you think about — how to get drugs and what kind of drugs to do. Unless you go fishing or hunting or something like that, there’s not much to do in a small town.”

Needham said she had used meth since she was 12, but it wasn’t until she got a divorce that she began using a needle.

“I didn’t know how to cope with it,” said Needham, who now lives in Texas.

“I had been on dope for years. It was easier for me to blame my problems on it if I increased my drug use.”

“The people who come into the office that are problem cases with opioid addiction all have mental health problems,” Woods said.

Getting help for addiction in cities or small towns can be difficult. But affordable extended-inpatient programs and mental-health professionals tend to be clustered near urban areas, despite higher poverty rates in rural ones.

Needham said she ran into this problem. The only way she could get into a program, she said, was after being arrested.

“I kept telling them (prosecutors and probation officers) I need rehab, because as long as I’m in this little town, not having my own place to live and staying from person to person — that’s all I knew was people who did drugs, so I couldn’t get clean,” she said.

Burns, of the Kiamichi Council in Hugo, said rural residents addicted to drugs often don’t have a job and can’t afford treatment, meaning the cost will fall to the state.

“Some had no running water, no electricity. It was like that because they were so deep into their drug addiction,” Burns said. “It’s either you don’t make enough money and can’t get treatment or you make too much and then it’s private pay.”

A revamping of the inpatient waiting list by the Mental Health Department has helped expedite finding people a bed, Burns said. But the system still prioritizes intravenous drug users and pregnant women over other types of drug users.

Most counties have drug courts, which have been effective at helping people overcome addiction, said Kim Hamilton, site director for CREOKS’ Okmulgee clinic.

But for low-level offenders with only a misdemeanor drug charge, drug court is not an option. Courts do require such offenders to enter treatment, but often the treatment doesn’t stick, said Burns, of the Kiamichi Council in Hugo.

“Some of it was — it helped turn their life around,” Burns said. “And some of them, a week after they hit stage five, were back at it again.”