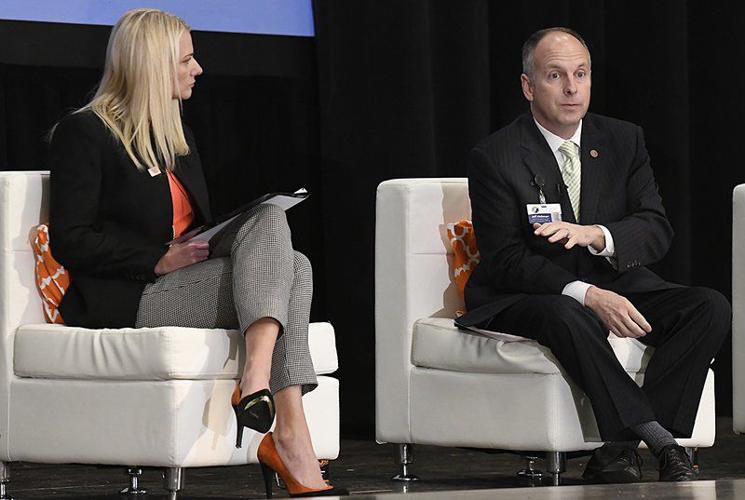 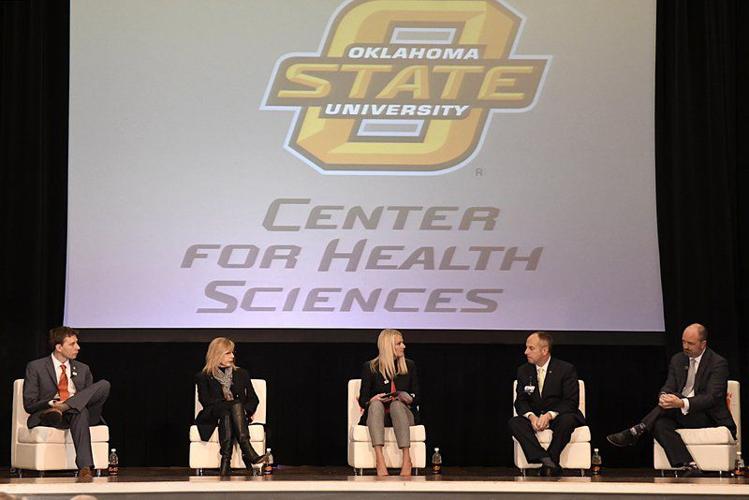 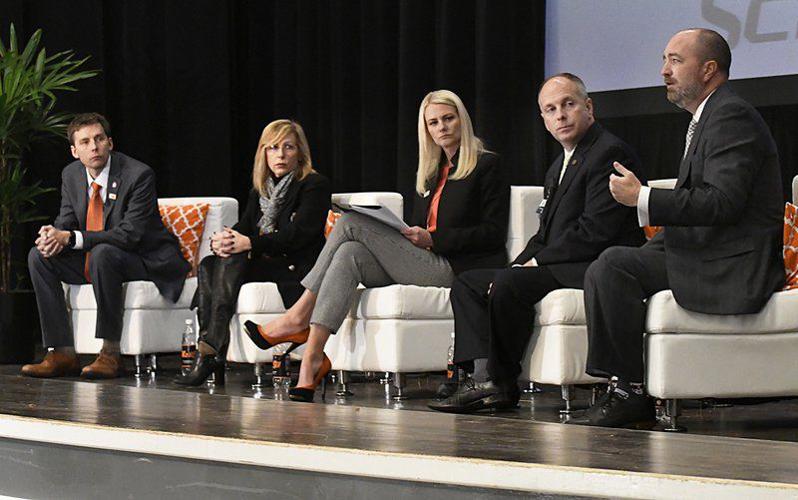 ENID, Okla. — Education was the most common theme for a solution to the state's mounting opioid crisis, officials said Wednesday during an addiction summit held in Enid.

Members of OSU Center for Health Sciences, law enforcement officials, state and local leaders, and policy makers met for the Addiction in Rural Oklahoma Summit at Central National Bank Center. The summit was one of three across the state. One was held Tuesday in Lawton and another was planned for Thursday in Durant.

Opioids are a class of drugs that include the illegal drug heroin, synthetic opioids such as fentanyl, and pain relievers available legally by prescription, such as oxycodone (OxyContin®), hydrocodone (Vicodin®), codeine, morphine, and many others.

The summit was divided into two panel discussions. The first moderated by Kayse Shrum, D.O., president of OSU Center for Health Sciences (OSU-CHS) and dean of OSU College of Osteopathic Medicine, and the second moderated by Oklahoma Attorney General Mike Hunter.

"Too many Oklahoman lives have been cut short due to overdose. There is a human toll and human face to addiction," she said. "We need to remove the stigma of addiction. Addiction can happen to anyone and anywhere. Addiction is a brain disease, and we need to recognize it and treat it."

Shrum said in 2014 OSU Health Sciences Center was one of the first medical schools to include an addiction course in its curriculum. She said medical students now conduct clinical rotations at a Tulsa addiction recovery center, no matter which specialty they study.

Shrum first asked the group what the biggest barriers to fighting the opioid crisis were.

Slatton-Hodges and Beaman both said there were too many patients seeking addiction treatment but not nearly enough physicians ready to take on the caseload.

"We just don't have enough doctors, counselors and other providers in Oklahoma to meet the need for this incredible amount of addiction," Beaman said.

Hickman suggested manpower was a cause for concern.

"Our state entities do a good job, but for the most part they are undermanned and overwhelmed," he said.

He said contrary to popular belief, the state Legislature has invested in mental health, with funding increasing 56 percent over the past decade.

"That tells you how significant the problem is," he said. "It's going to take a significant investment to get us there."

Shrum asked the panel how the state's budget would affect the issue of opioid addiction.

"The economy has changed, the way we do business has changed. The world has changed, and Oklahoma’s tax code has not kept up with that. We have to keep up with that. That has to change if we are ever going to address these problems," Hickman said. "There is a cost to these things as well. You're putting money into it because you hope you are going to solve the problem. I don't know if there has even been such an important issue as we're talking about today."

Woods, executive director of the state's Tobacco Settlement Endowment Trust, said the issued needed to be addressed before it reached crisis level.

"It’s facing the crisis. It’s facing the disease head on. We're dealing with an individual where the options are finding a path for success or a prison term," he said. "We see it when those folks are in crisis. What it means for Department of Corrections and Department of Mental Health. We have to have the mentality of addressing these issues before they reach this critical level."

Slatton-Hodges said Oklahoma is ranked 48th per capita for funding mental health and addiction issues and that there was a "long way to go."

"Today, if you are a person suffering from a serious addiction and you need a residential level of treatment you have a waiting list. You have a waiting list, that, on an average day, is 600 persons long, In my opinion, that is not good enough. I have spent the last 12 years stretching a dollar as far as it would go to treat as many people as possible."

Beaman said addiction costs the state more through incarceration than for treatment and that studying triggers for addiction, such as an individual's Adverse Child Experiences, could be more efficient. He said the more ACEs an individual has, the more likely they are to suffer from an addiction or certain mental health problems.

"Oklahoma leads the nation in the number of children with these traumatic experiences," he said. "Why our addictions rates are so high, why we have so many people addicted, it becomes clear."

Shrum also asked the panel how to "tackle" the opioid problem without harming those who are using their medications properly.

"I don't think anybody is saying we don’t need to use opioid medication, as long as there is an appropriate way to prescribe it and how to monitor how it is being used," he said. "Are you going to work? Are you able to function in your normal life? However, if you're on opioid pain medication and you cannot work, or can’t drive, that’s something your doctor needs to look at."

"I think the key is education," Slatton-Hodges said. "Education on behalf of all of us. These are medications that carry with them a strong likelihood of addiction."

She suggested patients ask their doctor if opioid medication is truly needed or could something else be prescribed, or some other course of treatment.

Beaman said people need to ignore the stigmas of addiction and treat it as a disease.

"Addiction really is a brain disease. It is not a personal, moral failure," he said. "When you take an opioid, a chemical is released in central part of brain called dopamine."

As an example, Beaman said the cheesecake served with lunch would increase the dopamine level in a brain by 100 times. When taking an opioid, the chemical releases is increased by 700 to 800 times.

"And if I use methamphetamine, it goes up to 1,400 times normal," he said. "Your body wants things you need to survive to be pleasurable and opioids hijack that system. You don't realize the consequences because you're just trying to get your next dose."

Hunter spoke before the panel discussion, saying lion's share of the opioid problem was due to the drug manufacturers.

"We’ve made a decision, on behalf of the state, that drug manufacturers out there are cause of the problem," he said. "It’s just this side of evil. They've made the decision to value profit over patients, wealth over health."

"... and the result is hundreds of thousands of people have died," he said. "We’ve made a decision to hold them accountable for the pain they've afflicted upon the state."

Hunter said that an oversupply of opioids is leading to many overdoses in the state.

"They are still vomitting these drugs all over the country," he said. "That oversupply has got to be stemmed and it's got to be interdicted."

Hunter asked the panel first what they saw as "major drivers" of opioid addiction.

"America, the United States, it's under 5 percent of the total population of the world, yet it consumers 80 percent of opioids worldwide and 99 percent of hydrocodone worldwide," he said. "For us, at the Oklahoma Bureau of Narcotics, one of the ways we address it is the take-back program."

OBN has 177 locations across the state, threein Enid, to collect unused prescription medications.

"This year, over 21,000 pounds of medication has been safely disposed of, at no cost to the state," Skully said. "Forty percent of households have outdated medications, expired opioid medication that needs to be disposed of, Forty-seven precent of kids said they had easy access to parent's medications, 75 percent of heroin addicts said they got their start taking opioids by taking meds out of their friends and families' medicine cabinets."

Byrne said the belief that opioids are a safer drug and availability are driving abuse.

"We know adults are getting it from prescribers. It's this sense that it’s safe. If my doctor is prescribing it, it’s not going to harm me. It’s that safety and the availability to adults and the youth we know are getting it from their adults," he said. "When you’re fourth in the nation for the amount of opioids prescribed, you’ve got a problem."

Slatton-Hodges said she believes it was the misrepresentation to physicians that has led to widespread abuse.

"I do think our physicians were sold a bill of goods. I think they were taught this was a new age of opiates and people don’t have to live in pain," she said. "I think that the root problem really is the education of physicians on proper prescribing practices. We don't have to have a cure for every ache and pain. I think it's important to say, 'Do I need and opiate for that or can I get by with less?'"

Hunter asked the panel what, given their experiences, were the best ways to reach not just young people but the general public.

"They've got to hear it from someone whose opinion they value," Byrne said. "It’s getting the parents to talk, it’s getting the ministers to talk so they are getting the same message. That’s where the effectiveness comes in, when we speak as a community."