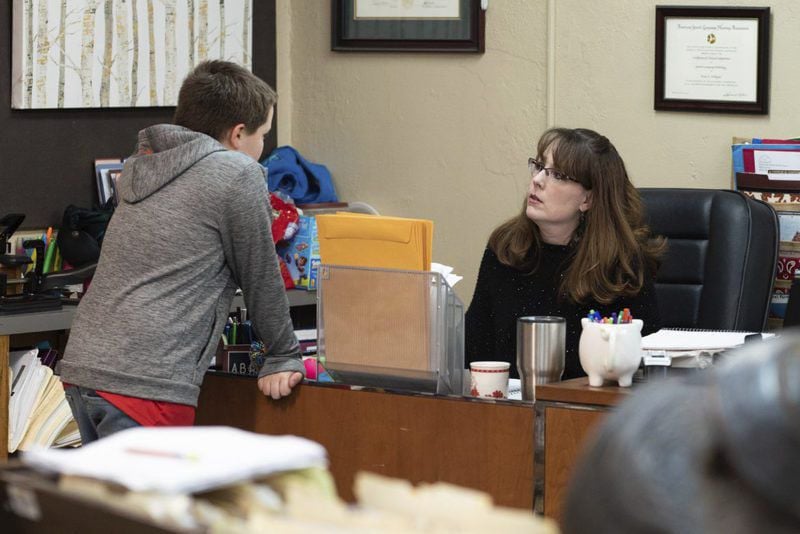 Tricia Willyard talks to her son during school on Nov. 14, 2018. Willyard's son, now a third grader, was retained in first grade because he struggled with reading due to dyslexia. Whitney Bryen/Oklahoma Watch 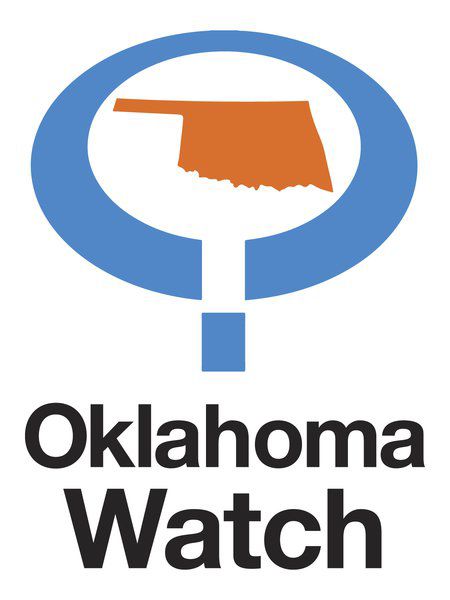 Tricia Willyard talks to her son during school on Nov. 14, 2018. Willyard's son, now a third grader, was retained in first grade because he struggled with reading due to dyslexia. Whitney Bryen/Oklahoma Watch

As a first-grader, Tricia Willyard’s son struggled to read. Educators at his school recommended he repeat first grade — something Willyard, herself an educator in a nearby district, at first opposed.

She knew what the research said about retention — that there can be long-term detrimental effects — and she felt like his school hadn’t yet done enough to help him. But she eventually went along with it, and the news crushed her son.

“Psychologically, it’s devastating,” said Willyard, of Ketchum. “We had to role play what he was going to say when people asked why he wasn’t going on to the next grade.” Her son, whom she described as a bright and respectful kid, was 6 years old.

As is the norm at elementary schools across the state, school leaders were concerned about the third-grade reading test. Willyard says the principal told her they were afraid her son would not pass the test, which at that point still was two years away.

Despite a laser focus on third grade in public schools across Oklahoma — it’s the only year educators are required by law to retain students who aren’t reading-proficient — it’s not the most common year for students to be retained. A review of federal data from 2011-12 to 2015-16, the latest available, found that repeating a grade is actually more common in kindergarten and first grade.

The high-stakes third-grade test appears to drive many of the early retentions.

These early-grade retentions are happening more regularly in Oklahoma than almost any other state. According to the data, reported by schools to the U.S. Department of Education, nearly 10,000 students in kindergarten through second grade were retained in the 2015-16 school year, compared to just over 2,500 in third grade. That represents 6 percent of all students in those three grades, the second-highest rate among the 50 states plus the District of Columbia, according to an Oklahoma Watch analysis. Only Mississippi retained a higher proportion of students in those early grades.

More than half of states reported a rate of 2 percent or less.

In some cases, retaining a student is warranted and even beneficial, especially if their struggles are related to age or maturity, educators say. But Oklahoma’s high rate suggests something is out of whack.

Retention also is costly. Assuming all 9,865 kindergarten through second-grade students retained in 2015-16 complete high school, one extra year of schooling at Oklahoma’s average of $8,091 per student costs the state $80 million. Advocates say that money would be better spent on extra support for the student within their normal grade progression.

Repeating a grade has human costs, too. A researcher at Texas A&M University followed nearly 800 children for 14 years and found those who were held back during elementary school were almost three times more likely to drop out of high school than their peers. In that study, the most common year repeated was first grade.

Not graduating has lifelong ramifications: High school dropouts earn less than those with a diploma, are more likely to be unemployed, are generally less healthy and more likely to end up in prison. Oklahoma’s current graduation rate is 83 percent, and one of Oklahoma’s goals under its Every Student Succeeds Act plan is to improve the rate to at least 90 percent.

The problem with retention

The Texas A&M study compared retained students with promoted students and found the biggest difference came during the transition to high school in ninth grade.

That year, the previously retained students typically turned 16, an age that opened up opportunities to work full-time or enroll in a GED program. And those students were further from obtaining a high school diploma than their classmates. It increased the odds the students would drop out by 2.67 times.

Jan Hughs, the researcher who led the study, urges states to consider alternatives to retention in the early grades.

“I don’t think it’s harmful for every child, but more research needs to be conducted on when it’s an appropriate intervention,” she said.

Another study found that reading and math achievement improved for Florida students who were retained in third grade, and that being old for their grade didn’t reduce the likelihood the student would receive a diploma. But critics note the researcher in that study and others on retention works for a Harvard research center chaired by former Florida Gov. Jeb Bush, who came up with the retention policy and has been pushing it nationwide.

Why state schools are retaining kids

Oklahoma’s retention trend likely is driven by a confluence of factors: classes are bigger, kindergarten standards are higher and fewer schools employ classroom aides. That makes it harder for students falling behind to receive the help they need to catch up.

A major driver of retentions in early grades, school administrators and parents say, is the Reading Sufficiency Act and its high stakes test of third-graders. Students who don’t pass are subject to mandatory retention unless they qualify for an exemption.

The data shows the number of students retained jumped in each of the lower grades during implementation of the reading retention law but has since dipped slightly. The increase was most pronounced in third grade, although the numbers are higher in kindergarten and first grade. The law was passed in 2011 and mandatory retention of third-graders went into effect in 2014.

Educators say it’s more palatable to hold a student back before third grade versus when students are older and more socially aware and susceptible to teasing or bullying.

Retention in an early grade also will shield a student from repeating third grade twice, which is the maximum allowed under the Reading Sufficiency Act. If the student already has been held back for two years in kindergarten through third grade, they qualify for an exemption regardless of their score on the reading test.

Repeating third grade twice, educators say, would be particularly harmful and at least some of the early grade retentions appear to be to prevent that scenario.

Jolene Armstrong, a librarian at Okmulgee Primary School, works with many students who have been retained. She described a student who is repeating third grade this year and has been acting out because of it. If he is retained again, she predicts his behavioral issues will escalate.

Schools are required to report data on third-grade retention to the state Department of Education each year, but no such requirement exists for earlier grades. The third-grade requirement creates a ripple effect downward, said Melonie Hau, superintendent of Duncan Public Schools.

“The public scrutiny it receives when a student fails the third-grade test weighs heavy on students and parents and teachers and principals,” she said. “(We) want to make sure we’re closing those learning gaps as early as possible.”

Retention in third grade is standardized by law, but decisions to hold students back in earlier grades are much more individualized and can be based on students’ lack of social skills or age.

“I have a young class this year, and they just aren’t ready,” kindergarten teacher Melissa Shan said of her students at Angie Debo Elementary in Edmond. “It’s not their fault.”

Kindergarteners can range in age from 4 to 6 years old because of calendar deadlines for enrollment, and students in that age group can have a big range of ability to master skills essential for school.

One motive parents may have for enrolling their child as early as possible is child care costs. Sen. Greg McCortney, R-Ada, filed a bill to move the age cutoff for school enrollment to July 1. Currently, children have to be at least 4 to enroll in pre-K and 5 to enroll in kindergarten by Sept. 1.

Teachers applauded the idea; they told him students are coming to school too young and unprepared. Some parents, though, lashed out in comments to an article about the bill, bemoaning how unaffordable child care is.

“It has been eye-opening for me the number of parents who reacted to the bill somewhat negatively, basically saying they enrolled their kids knowing or expecting for them to be in school a year longer. They were going to use retention,” McCortney said.

‘Not an exact science’

Schools also rely on computerized benchmarking programs to glean more information on students’ skill sets and how they compare to other students their age. Schools are required under the Reading Sufficiency Act to screen students twice a year using such programs in kindergarten through third grade.

The screeners — Renaissance Star Reading is the most common one — are meant to inform teaching throughout the year and identify students who need remediation. But Renaissance claims its screener can “predict” a child’s performance on state tests, and parents are finding their child’s benchmarking scores are sometimes used by schools to push for retention.

Julie Collins, an education professor at the University of Central Oklahoma, said one reason she was opposed to adding mandatory retention to the reading act is the lack of knowledge about the benchmarking results.

Educators have different perceptions of how far behind merits retention and there’s no set standard.

The benchmarking itself is not an exact science, she said. Some kids score poorly because they are having a bad day or they don’t know how to use a computer mouse, which is common with kindergarteners.

“When you make a law that says you’re going to assess all children, but you don’t also train teachers on what those assessments mean, the students aren’t necessarily getting the best interventions,” she said.

Willyard, the Ketchum mom, said she, too, was frustrated by the educators at her son’s school when they said he wasn’t reading on grade level according to the computer screener, but couldn’t explain what the numbers meant.

Willyard, a speech language pathologist at Ketchum Elementary School, had him tested for dyslexia, and the diagnosis helped explain his struggles. She also moved him to a different school district, where he’s now doing “phenomenal,” she says. He’s reading on grade level and receiving appropriate interventions and accommodations in the classroom.

“Doing first grade over was not the key,” she said.