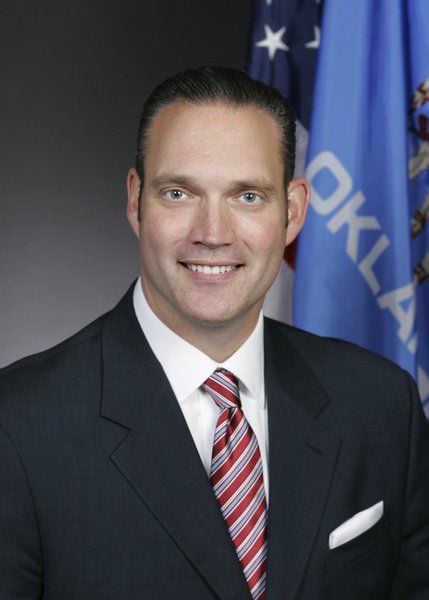 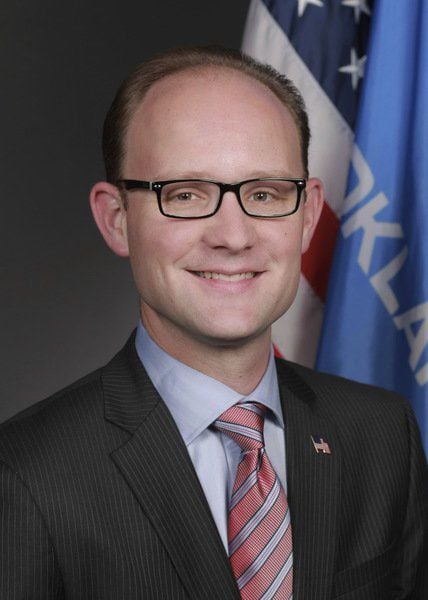 OKLAHOMA CITY — Tempers flared Thursday and budget talks — at least briefly — collapsed as lawmakers remained deeply divided on whether to increase taxes on the oil and gas industry.

As several purported bipartisan revenue-raising compromises have collapsed in the final days of session, lawmakers exchanged barbs about whether their counterparts on the other side of the aisle were negotiating in good faith.

Meanwhile, the political showmanship ramped up as protesters crowded into the Capitol. They waved signs, shouted loudly, wore bright orange life vests and even posted a large cardboard image of the Titanic sinking outside the legislative chambers.

Lawmakers continued to grapple with how to fill an $878 million budget shortfall without crippling schools, health care, public safety and road and bridge projects before they adjourn for the year next week.

The latest budget dust-up centered around whether the state should increase the state’s gross production rate — the amount oil and gas producers pay on what they extract from the ground.

Democrats said they were convinced Republicans had agreed to a 5 percent rate on all new wells in exchange for Democratic support on a $1.50 per pack increase on the price of cigarettes. Republicans disputed that an agreement was reached.

Currently, lawmakers charge drillers 2 percent for the first 36 months of a well’s life. After 36 months, the tax rate jumps to 7 percent.

Oklahoma Tax Commission, though, notes the majority of wells experience a 70 percent decline in output by the second-year of production.

Critics contend the current rate is set so low Oklahoma is losing hundreds of millions in potential revenue. Supporters maintain the industry is an integral part of the economic lifeblood of Oklahoma.

By lunchtime, House Speaker Charles McCall, R-Atoka, had accused House Minority Leader Scott Inman of walking away from budget negotiations. He said the spirit of compromise seemed to be gone.

“The state of Oklahoma is in a position where leaders must put aside their personal priorities and focus on what’s best for Oklahoma,” McCall said. “If you’re not negotiating — and you’re not at the table — you’re not being part of the solution.”

Inman, D-Del City, fired back, saying he was convinced lawmakers had reached a bipartisan agreement Wednesday night to raise the production rate. When he arrived at Capitol on Thursday morning, he said he discovered the deal was off.

“I don’t believe them, ladies and gentleman,” Inman said of Republican House and Senate leadership. “I don’t believe they’re negotiating in good faith, and I believe what they’re doing is they’re playing games on behalf of the most powerful industry in the history of the world.”

Leaving a media briefing, Inman and Democratic caucus members then had to walk down a hallway crowded with dozens industry supporters waving signs that read “My Job Matters Too!” and “Save Our Oil & Gas Jobs.”

One of those protesters was Ryan Nelson, 40, of Arcadia, who works as a project development supervisor with Oklahoma City’s Continental Resources. He carried a sign that said “Legislators, We Provide ¼ of Oklahoma’s Revenue.”

“We want to keep production taxes low so we can continue to develop our efforts here and continue to produce oil and gas here,” he said. “I think ultimately (changing the rate) can harm the industry. If we have the incentive to drill elsewhere … we’re going to gravitate to a place where we’re not penalized for producing oil and gas.”

At the end of the same hallway stood another group of protesters wearing bright orange life vests. The members of the bipartisan Save Our State Coalition said they were trying to encourage the same lawmakers to increase the gross production rate to 7 percent.

They likened the state’s budget struggles to the sinking of the Titanic in 1912.

McKee was dressed in period-style costume complete with a white feather hat.

“We wanted to give them a visual representation,” McKee said. “We don’t have to hit that iceberg. We actually have a choice.”

FAIRVIEW - Funeral services for Carlene Ruth Remer, 79, will be 2 p.m., Monday, January 18, 2021, at the Fairview First Baptist Church with burial in the Fairview Cemetery. Arrangements by Fairview Funeral Home Inc.

JUNE 5, 1928-JAN. 13, 2021 FAIRVIEW - Graveside services will be held at 10:30 a.m., Wednesday, January 20, 2021, at the South Mennonite Brethren Cemetery, Fairview, OK, with Pastor Travis Schmidt officiating. Condolences may be made at www.piercefuneralhomes.com.

Memorial service for Dennis Ray Jackson, 76, Enid, will be 11:00 a.m., Monday, January 18, 2021, at World Harvest Church with Pastor Brad Mendenhall officiating. Services are under the direction of Ladusau-Evans Funeral Home. Condolences to www.ladusauevans.com.