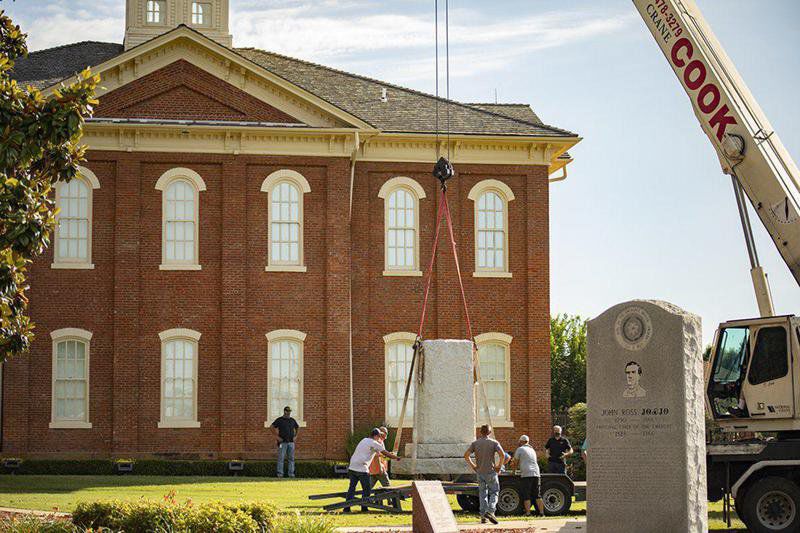 Two Confederate monuments are lifted by crane and removed from the Cherokee Nation Capitol Square in Tahlequah. 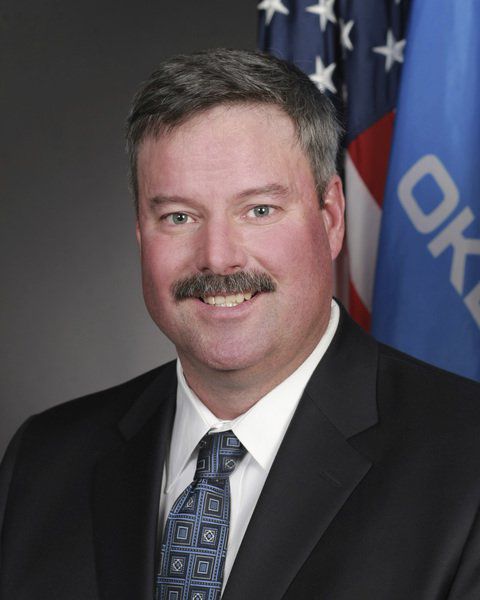 Two Confederate monuments are lifted by crane and removed from the Cherokee Nation Capitol Square in Tahlequah.

OKLAHOMA CITY — Controversial historical statues and monuments currently drawing the ire of protesters should be relocated to a nine-county area in Northwest Oklahoma, the region’s state senator said Thursday.

“Four years ago, President George W. Bush spoke at the opening of the National Museum of African (American) History and Culture in Washington, D.C., and he said a great nation does not hide its history, it faces its flaws and corrects them,” Murdock said. “We must face our flaws and move forward as a nation, but erasing our history dooms us to repeat it.”

Murdock said he believes artistic representations should be protected so the country can continue to learn from them.

“It makes no sense,” Murdock said the statues that have been targeted for destruction. “It’s even gotten to the point where some extremists have called for the removal or destruction of art depicting Jesus with light skin and hair. Jesus taught us to love our neighbors as ourselves — focusing on skin color diminished his message and teachings. This is just wrong.”

“We must preserve our history — the good, the bad, and yes, even the ugly,” he said. “These statues and monuments are interpretations of the personalities and events that shaped our nation, and as the decades have passed, our perspectives and context for these events and people have changed. All of that must be part of the discussion, but censoring that discussion circumvents growth and denies reality.”

House Minority Leader Emily Virgin, D-Norman, said if Murdock wants to preserve and learn about history, he should read a book. Statues and memorials that “glorify people who sought to marginalize people in America” aren’t necessary.

“For an elected representative to be focusing on that aspect of everything that has been happening is pretty disappointing,” Virgin said. “To be concerned about the statues in Oklahoma seems to be missing the point.”

She said she also worries about the image the state would be sending to prospective businesses and residents by displaying controversial monuments.

“I would be really worried about the message that Oklahoma itself would be sending if people in these other places have decided that these statues and monuments were not appropriate in their localities that we would welcome them in Oklahoma.”

Douglas said he wonders why Oklahoma would want to bring more Confederate statues when one already is erected outside the Bryan County Courthouse.

“It’s in desperate need of repair,” he said. “But the state and city (have) no funds to repair it, as it sits for over 100 years in a crumbling condition.”

Douglas, who also serves on the national board of directors for the NAACP, said the Bryan County monument spurred protests in 2017. He questioned why the state would want to add more statues that would attract protesters.

In any case, he said it’s time to heal, not divide with controversial proposals like this.

“It will turn constituents in Oklahoma against each other,” he said. “Why are we starting this battle in Oklahoma? Do we need to bring more division?”

He said if Murdock wants to fundraise, he should raise money for Tulsa’s Black Wall Street, which was the site of the nation’s worst race massacre, or to fund reparations for the victims of that violence nearly a century ago. He also said Murdock could also raise money to pay for education so that Black history can be taught in school.

He said it would be hurtful to drive around Northwest Oklahoma and randomly encounter objectionable statues spread across the region. He said he doesn’t understand why Murdock suddenly wants to cut out a section of Oklahoma to house them.

“He was trying to find a safe way to do what a lot of individuals are trying to fight against, which is preserving history that is offensive to us,” Young said. “I think a lot of those monuments need to come down because they are offensive. It was a negative indication of where our country was trying to go. They promote a past that most of us are not very proud of.”

Young said he doesn’t know of any Union soldier statues that have been toppled. He said the monuments targeted by protesters feature people who were traitors or individuals who thought some people’s lives were worth less than others.

Young said if Murdock wants to construct a building to privately hide the controversial statues, that would be fine, but they shouldn’t be publicly displayed.