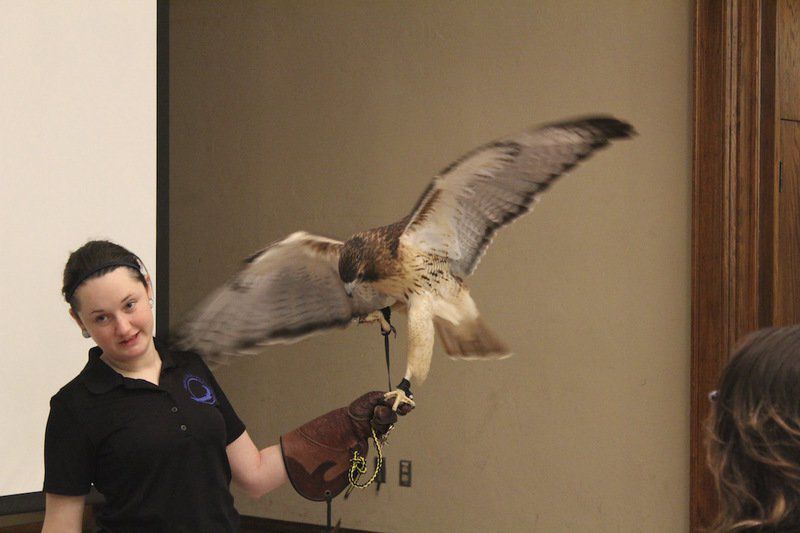 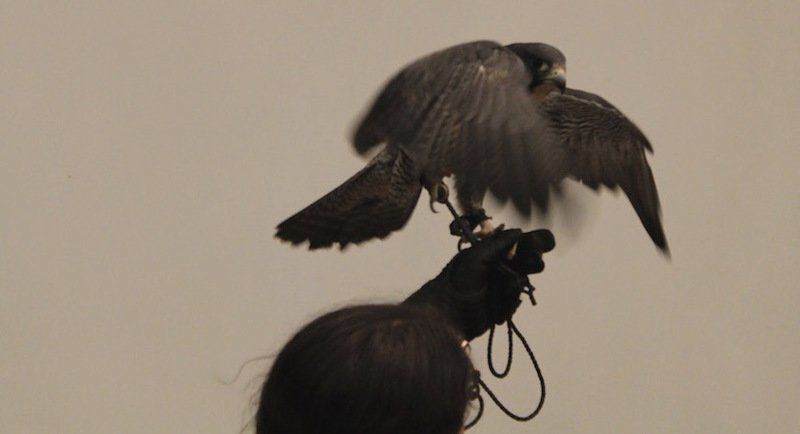 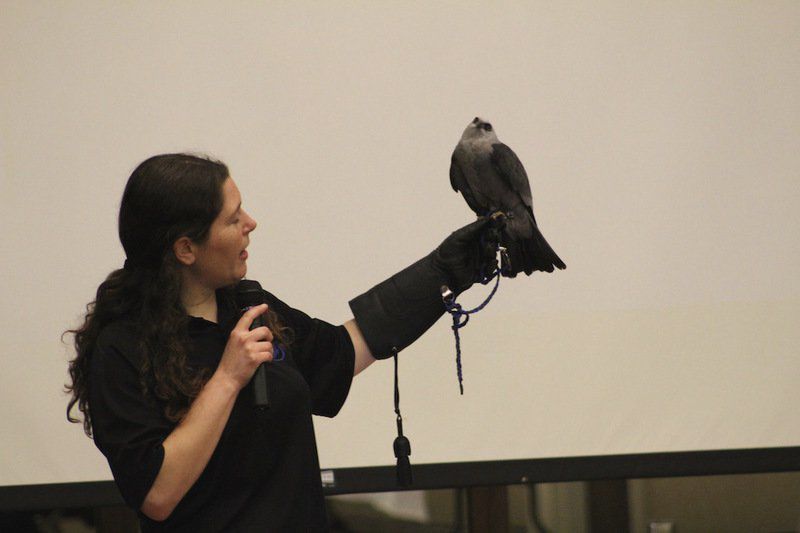 Jessica Ruiz and Jordan O'Hara from the Grey Snow Eagle House talked about the organization and what it does. A red-tailed hawk, Mississippi kite and peregrine falcon were shown at the end of lunch.

"We strive to rehabilitate as many eagles as we can. We take them in, we take care of them and our goal is to release them back into the wild," Ruiz said. "Now, if any of them are injured in such a way that they cannot fly or hunt on their own, or would not survive in the world properly, then we also have the role of providing long-term care for these birds."

She said the organization, located in Perkins, also works to educate people about the birds and has research programs to study birds and learn more.

"A lot of birds play many valuable roles in the environment and a number of ones that we have are predators, and predators are important to keep the pest numbers down ... if you took two mice and you gave them an acre of land and there were no predators affecting those mice for one year, in just that time, those two mice would become one billion mice ... they're very important. " Ruiz said.

Predators also cull sick, injured and old from the population, control others pests, such as snakes and rats, and vultures clean up the environment by keeping diseases under control, she said.

O'Hara talked about how various poisoning is affecting birds in the state and country. Pesticides such as DDT, lead from lead-based bullets and other sources, and other pesticides and livestock pharmaceuticals are causing a decline in vultures and raptors, she said.

Infrastructure also is a big factor affecting birds, Ruiz said. Electrocution from power lines, which birds find to be good perches, is one of the highest causes of death and injury to them. However, Ruiz said more poles are being retrofitted with newer equipment as a method to reduce electrocutions.

Window collisions also are a significant cause of death among birds, numbering up to one billion deaths annually, Ruiz said. For example, the new Minnesota Vikings Stadium, which uses mirrored glass, has become the top bird killer in the Twin Cities area, she said.

"Unfortunately, these are often built in migratory pathways, places where the birds are flying through on their migration. So it's hundreds of birds flying through and they've flown those directions for so many years," Ruiz said.

There are positives, though, for the birds' future, Ruiz and O'Hara said. Devices, such as GPS based methods and other technologies, are being used to track bird movements to better understand how they use the landscape.

With this technology, migrations can be tracked, areas being used by a species can be determined and researchers can find out how structures such as wind farms influence the movement of individuals, amongst other research, Ruiz said. Wild birds are also being caught and studied before being released.

O'Hara and Ruiz said the public can help protect birds by using non-lead ammunition, disposing of trash properly and using screened windows or UV stickers on windows to help birds realize a window in present.

They also said people can get proper depredation permits, and get raptors to local rehabilitators when they come across any in need of help. Nest boxes and bird feeders also can be set up, and people are encouraged to clean out invasive species nests. The two also advocated for native plant species to be planted, to try and keep cats indoors and to volunteer.

For information on the Grey Eagle Snow House, go to http://eagles.iowanation.org/.

Miller is the area reporter for the Enid News & Eagle. Follow him on Twitter, @Ryanm_reporter. He can be reached at rmiller@enidnews.com.

Graveside service for Annie Rowley, of Enid, will be 10:00 a.m. Tuesday, August 3, 2021, at Enid Cemetery. Services are under the direction of Ladusau-Evans Funeral Home. Condolences can be made at www.ladusauevans.com.