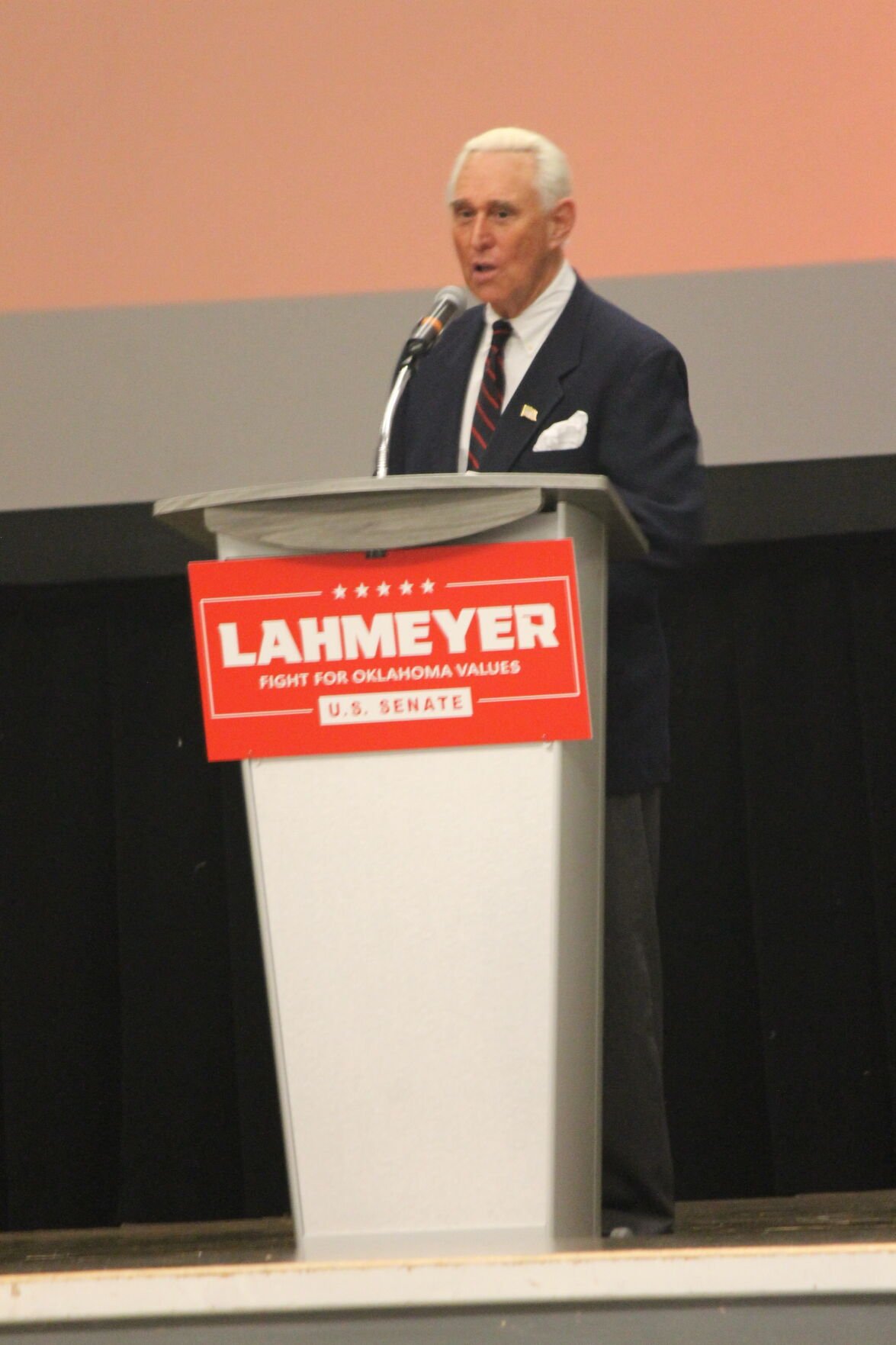 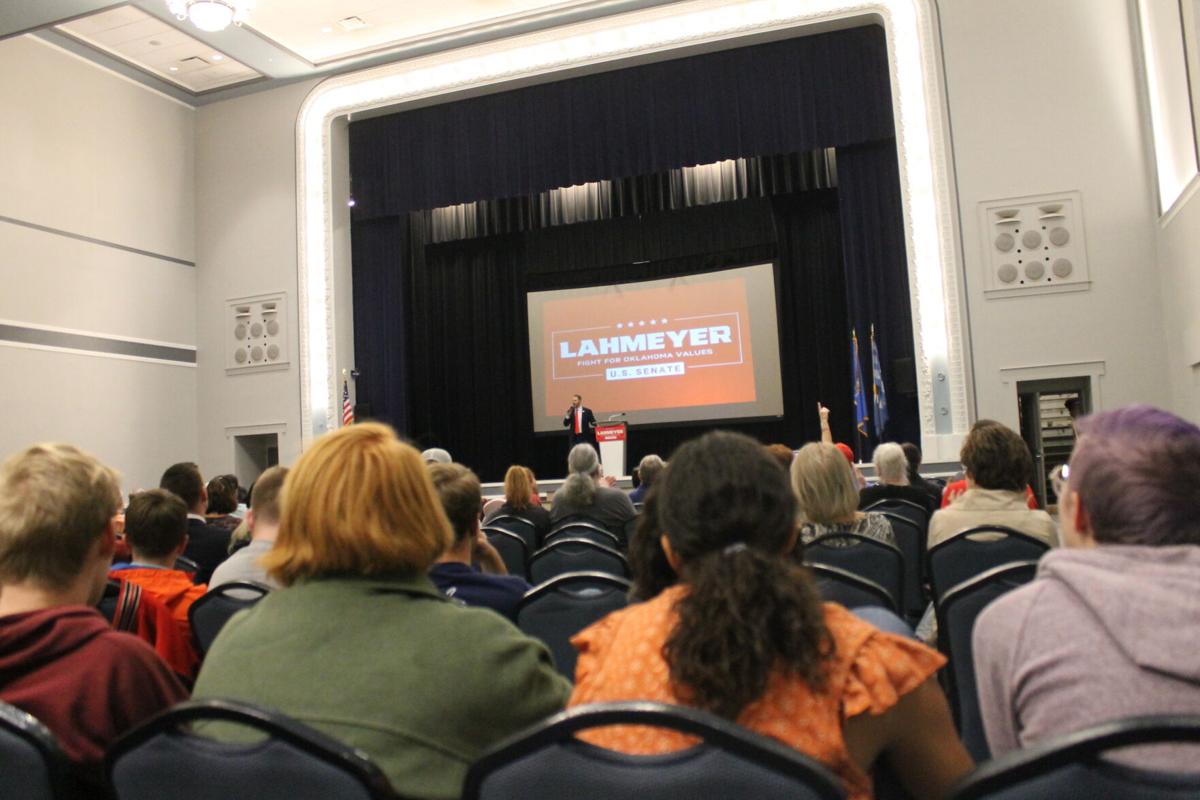 ENID, Okla. — Republicans from all levels of government all but declared war on their own party during a political campaign rally for a U.S. Senate candidate who returned to Enid on Sunday night.

He and the other GOP leaders and political candidates headlining the event at Stride Bank Center garnered numerous mid-speech standing applauses, made anti-COVID vaccine jokes and claims about the 2020 election, and repeated the phrase “Let’s Go Brandon,” a newly popular underground saying insulting President Joe Biden. About 220 people were in attendance.

Oklahoma GOP Chair John Bennett said these “Republicans in Name Only” had fought to steal the election from former President Donald Trump, who was defeated by Joe Biden last November.

“And guess what, we’re not just going to lay down and take it anymore.”

“We have a lot of biblical and political babble going on,” he said. “Take those RINOs out.”

“That shows you who’s making the real choices,” Hacker said.

He called his opponent “The Great Appeaser,” criticizing Lankford on numerous platforms such as his attempts at immigration reform and for switching his vote to authorize the 2020 election results, after the Jan. 6 U.S. Capitol insurrection.

“We have to stand up and fight on all the different fronts,” Lahmeyer said, “and unfortunately our senator, James Lankford — although he’s not a bad guy, he’s not an evil guy — he’s not a fighter. … We need warriors in Washington, D.C., who will fight.”

Stone said there was no better example of a Republican who has lost his way than Lankford.

He said he was offended that the Oklahoma junior senator didn’t question the 2020 election results, which hundreds of thousands of Americans still believe were rigged. No certified audits of county elections have conclusively proven so, and none of the 60 nationwide lawsuits from Trump’s campaign contesting the election were successful.

Stone, a longtime conservative political consultant, was arrested and later convicted in 2019 on seven felony counts related to the special counsel investigation of Trump’s campaign. Trump later commuted Stone’s sentence before the latter was to report to a federal penitentiary, then pardoned him in December 2020, weeks before Trump left the White House.

Tensions grew Monday between conservative Republicans and the state’s business community over whether employers should have the power to impose COVID-19 vaccination policies.

Stone called the 45th president the “greatest president since Abraham Lincoln,” and shouts and applause rang out as he claimed Trump won the election.

He also referred to Black Lives Matter organizers — to whom Lankford apologized following the Jan. 6 insurrection for the election claims having had racial undertones — as “thugs,” and said illegal immigrants coming from south of the U.S. are bringing “crimes, drugs and disease” into the country.

Both said Dr. Anthony Fauci, director of the National Institute of Allergy and Infectious Disease, should be arrested for “crimes against humanity” — supposedly for creating the coronavirus and the vaccine he claimed is injuring and killing thousands of Americans.

He returned to Enid’s Stride Bank Center for a second time Sunday with Stone’s new endorsement in tow.

Stone called the 30-year-old Lahmeyer one of the most “dynamic, young candidates I’ve met in my 40 years of politics.”

Lahmeyer previously appeared at an AMBUCS meeting in Enid to tout his endorsement from retired U.S. Gen. Michael Flynn, Trump’s former national security adviser, who had initially convinced Lahmeyer to campaign in March.

In 2022, he and Broken Arrow state Rep. Nathan Dahm will face off in the Republican primary against Lankford, who first took office after a special election in 2014 and was reelected to a full six-year term in 2016.

Lahmeyer said he also returned to Enid with a goal of raising $10,000 on Sunday night. His campaign said in an email Monday that over $14,000 had been raised after the rally.

Chairs in Stride Bank Center’s ballroom were each covered in campaign donation envelopes and a leaflet for Lahmeyer’s campaign — as well as a flyer with a promo code offering people up to 66% off to MyPillow.com, the Minnesota pillow company whose CEO has been named in a $1.3 billion defamation lawsuit by the voting company Dominion.

“This is a war effort, guys. I need your help in this. We have a lot of work to do,” Lahmeyer told the audience, as men stood in front of the stage holding buckets waiting to receive campaign donations.

Since 2017, just under half of Lankford’s 3,137 itemized contributions, totaling over $1.8 million, have been from Oklahomans. Forty-eight of the 762 private committees also contributing to Lankford’s campaign are from Oklahoma, adding another over $1.4 million.

Sixty Enid residents have donated to Lankford’s Families for Lankford committee in those three reporting years, according to the FEC filings.

Dahm raised a total $51,211.64 during the first quarter of his campaign by September, with no contributions coming from Enid residents.