Enid voters will decide whether to keep the city’s lights on next week when they go to the polls to consider renewing a nearly century-old franchise with OG&E, which actively opposed city officials’ attempts to get out of the deal the last go-around.

On Tuesday, residents living in the city of Enid will decide whether to grant OG&E the right to produce, transmit and distribute electricity within city limits for another 25 years, extending a non-exclusive franchise agreement in place since 1927.

In exchange, the Oklahoma utilities company would provide the city of Enid revenue from a long-standard 3% franchise fee on all electricity sold, as well as a half-percent credit on kilowatt hours sold in Enid. 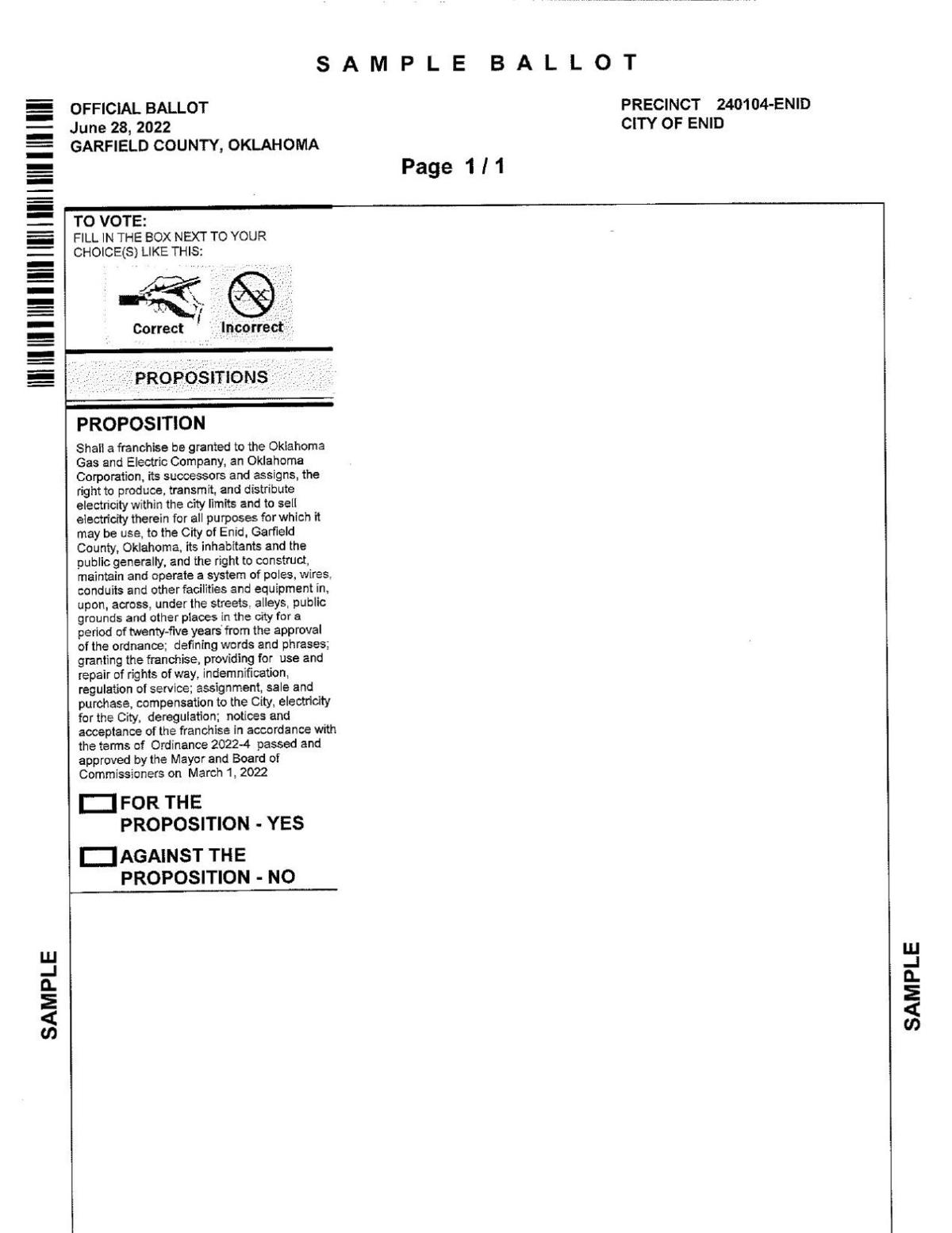 Revenue from the franchise fee goes to the city of Enid’s general fund, for general operating expenses throughout the year, City Manager Jerald Gilbert said.

“There may be some innovations in how electricity is delivered … but I got a feeling the utility will be around for a long time,” Gilbert said. “And thankfully, because electricity makes everything a lot nicer for us.”

The 25-year timeframe is a direct result of the costs associated with providing and upgrading power supplies to communities, OG&E spokesperson Alba Weaver said in an email to the News & Eagle. OG&E invests in substations, poles, equipment and absorbs a variety of other related costs, Weaver said.

The company also would upgrade street lights along the Van Buren overpass, along North Cleveland north of Chestnut and throughout downtown Enid.

In November 1997, Enid residents passed the resolution with a 72% majority vote, out of over 9,500 total ballots, according to the county election board.

Missing from the newest version of the agreement, which Enid city commissioners approved for next week’s ballot proposal in March, is the longtime option for the city to buy the electrical system from OG&E after a period of years.

Enid’s current agreement had included a provision that would’ve allowed the city of Enid to purchase the distribution system from OG&E within 15 years of passage, with the option having expired in 2012.

“I wouldn’t say there’s not a need (for the provision), but it’s not just a very practical clause to exercise now,” Gilbert told the News & Eagle last week. “And I think with the challenges we have with the very large Kaw Lake program, that weighed into the thinking of the commissioners in the negotiation and the final deal that’ll go before the vote of the people.”

Less of a battlegroundCompared with 25 years ago, Enid has had a notably different atmosphere leading up to OG&E’s franchise renewal.

In 1997, the city had reportedly instead intended to purchase the infrastructure from OG&E, with plans to contract a third party with Harold Hamm’s help to operate and maintain Enid’s electrical services.

On March 18, 1997, Enid city commissioners unanimously approved an amended 12 months’ written notice to terminate the existing 1973 franchise and notice of intent to purchase the property’s distribution facilities from OG&E.

This infrastructure includes the general plant, seven transformer substations and easements, poles, wires cables and various fixtures and equipment, according to minutes from the March meeting.

Before the franchise was renewed...

In 1997, the city had reportedly instead intended to purchase the infrastructure from OG&E, with plans to contract a third party with Harold Hamm's help to operate and maintain Enid’s electrical services.

Current Ward 1 City Commissioner Jerry Allen was also on the city commission in 1997 as franchise renewal negotiations were underway. He and other commissioners such as Mayor Mike Cooper attended several conferences in Washington, D.C., about relevant developments in energy deregulation.

Allen said last week that the idea to buy the system and then work with Hamm, board chairman and founder of Continental Resources, proved to be unpopular.

“We were getting beat up,” Allen said. “We put things out there and the torpedo’s full steam ahead. Then you have to have a strong backbone with people to accept not liking that idea.”

Leading the Enid Citizens Against the Government Takeover Committee, the three collected 4,770 signatures, more than the 1,552 needed, to call for a city election.

Enid’s then-city clerk, Linda Parks, ruled in mid-March that the petition was insufficient under administrative statute reasons, so the citizens committee challenged her and the city of Enid in Garfield County District Court on March 21, 1997. 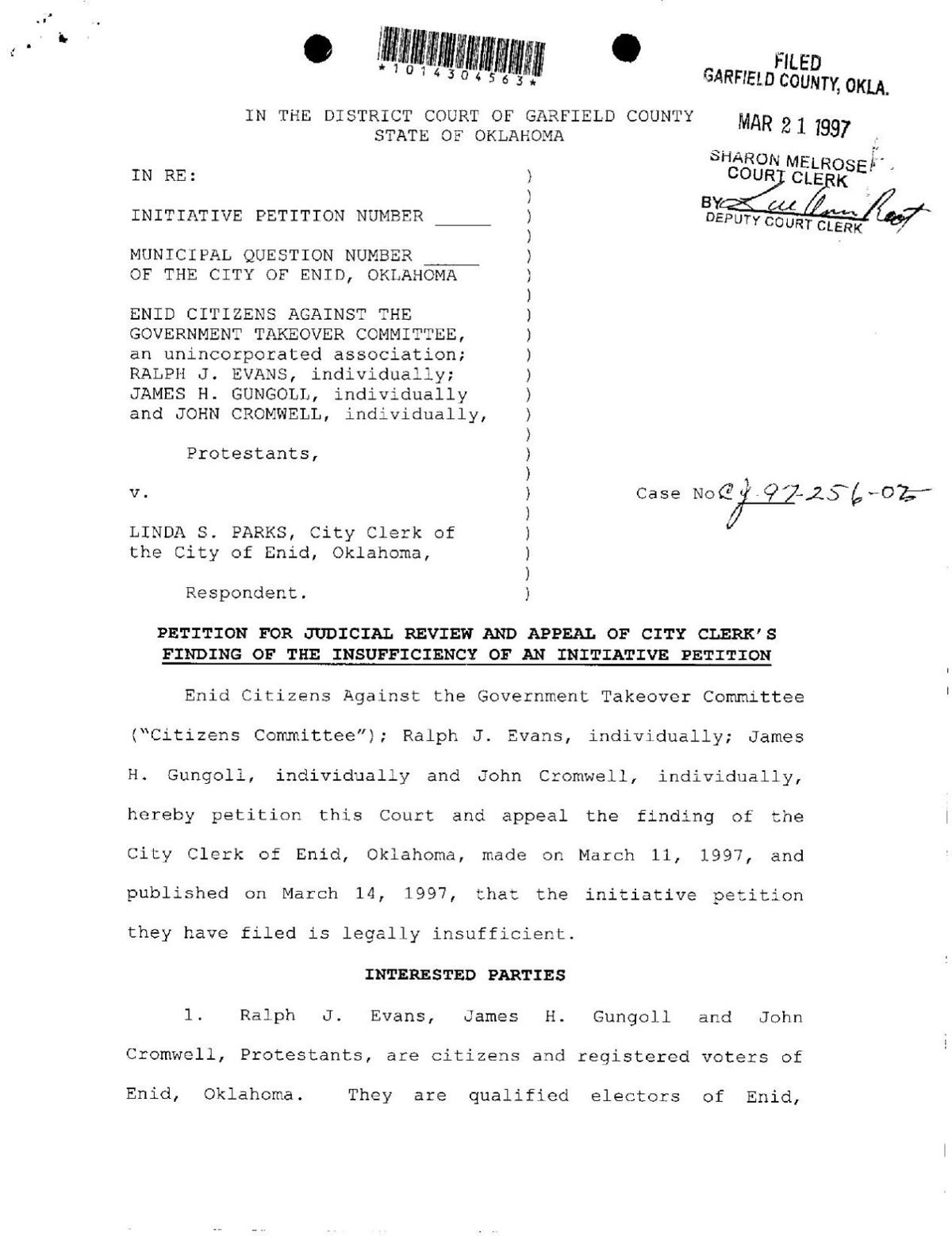 Within days of the lawsuit, a group of over 30 other prominent Enid residents and business owners opposing the petition — including Bob Berry, Stan Brownlee, Dan Dillingham, Norman Grey, Brian Henson, Joe and Stan Merrifield, James Parrish, Jim Strate and Lew Ward — countersued the Enid Citizens group, and this lawsuit was consolidated into the Parks suit.

Gungoll and Evans both have since passed away; Cromwell, a semi-retired Enid resident, did not respond to an email last week about the court case history.

At a July hearing, a judge appointed to the case from Dewey County ruled that Parks was appropriate in her actions to reject the citizens’ petition.

OG&E openly supported the petitioners’ attempt to renew the franchise, an attorney representing the citizens committee said during the hearing.

Lawyer Lee Slater, of Oklahoma City, said the citizens’ committee had asked OG&E for financial resources for the expected legal battle with the city, according to court minutes from the hearing.

Robert Campbell, an attorney for OG&E, said at a prior hearing that the company wouldn’t motion to intervene as fellow plaintiffs in the lawsuit, instead preferring to file an amicus brief.

Allen, the Enid city commissioner, said he recalled OG&E also was buying full-page newspaper ads about how bad an idea to buy and manage a city’s own system was. Municipalities such as Ponca City, Fairview and Stillwater then did and still do so as some of the 42 city members of the Oklahoma Municipal Power Authority.

At the Aug. 22, 1997, Enid City Commission meeting, members of the commission appeared to reverse course and renewed the agreement in its entirety, now with OG&E’s millions-dollar economic development incentive on the table.

Commissioner Bob Bickerstaff moved that the franchise ordinance title be read aloud twice before a roll call vote. Votes were then called by separate motions for each of the 12 sections of the ordinance, then for a final adoption of all sections together — all passing with a 4-2 vote.

Allen and fellow Commissioner Marion Mackey voted against every motion to approve the franchise ordinance. A special meeting a week later saw the commission vote the same way to approve the November 1997 ballot proposition.

As of November 2021, OG&E has 267 franchise agreements in place, Weaver said.

The information from OG&E is from Alba Weaver, OG&E senior manager of economic development and community affairs.

Here are some of the stories in the past few weeks that have published regarding today's primary election.

EDITORIAL: Study candidates before making your choice in today's primary

If you haven’t voted already during absentee or early voting, today is your last chance to have your say in the primary election that will det…