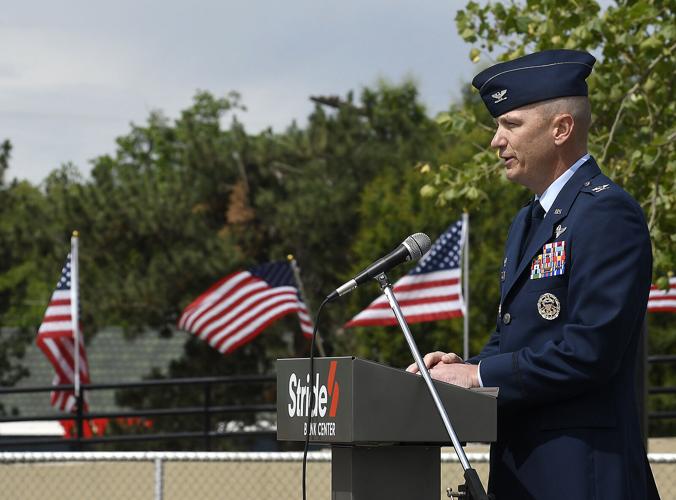 Col. Jay Johnson, Commander of the 71st FTW at Vance Air Force Base, addresses the audience during the Veterans Memorial Bridge Dedication Friday, May 28, 2021 at AMBUCS Park. 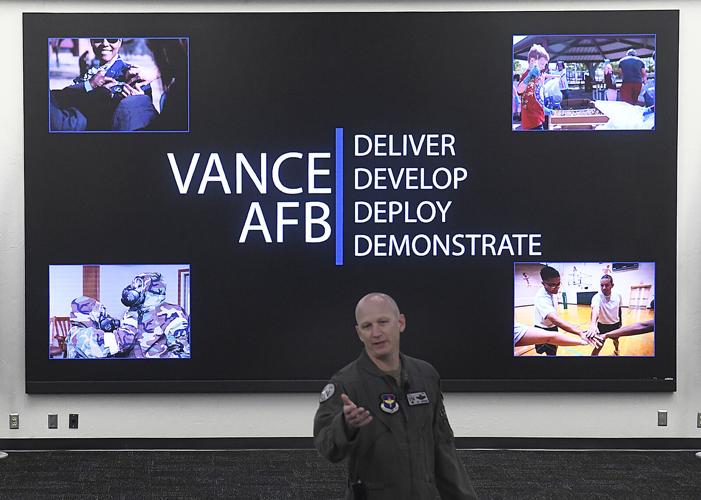 Col. Jay Johnson, commander of the 71st Flying Training Wing at Vance Air Force Base, gives a State of the Base address Friday, Jan. 28, 2022, at Autry Technology Center. 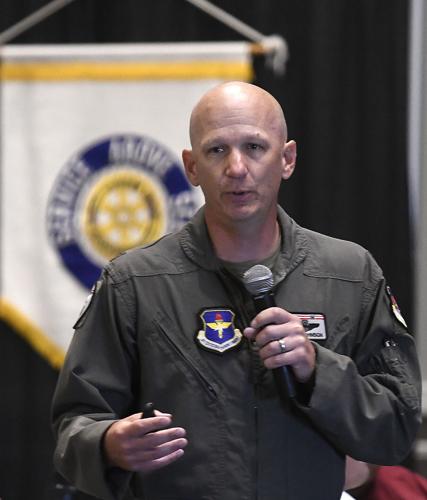 ENID, Okla. — Vance Air Force Base is the first stop in the Air Force for many of its personnel who come here, said Col. Jay A. Johnson, commander of the 71st Flying Training Wing.

The majority of students at Vance are second lieutenants, so they have just been commissioned through the Air Force Academy, Officer Training School or ROTC.

“We make a first impression in their AF experience here but also that relationship off base with the local community. I think that is a huge first step for them,” Johnson said. “This is their first exposure to the relationship between a base and a town. That’s why (Enid) Mayor (George) Pankonin and I put so much emphasis on that relationship, because they don’t know what they are going to be treated like when they go off base.”

On the path forward 2022: Bulding a resilient community: ALL MILITARY IMPACT STORIES

From the instructor side, people love coming to Vance for a couple of reasons, Johnson said. They get a break from the faster, operational tempo of the Air Force.

“A lot of people look forward to coming back to what we affectionately called ‘white jets,’ because the majority of them are painted white,” Johnson said. “A white jet tour, they look forward to because it creates a pretty stable home life for folks. Yes, we work really hard here. Yes, you may be gone on a weekend cross country, but for the most part you are going home every night and getting to spend quality time with your family. That’s not what you get at every operational assignment in the Air Force.”

The stability gives many of the non-students the opportunity to get involved in the community through schools, churches, charities, local government and volunteering, Johnson said.

At Vance and beyond, military life is not always easy, Johnson said. It’s demanding, with long work hours and operational units that can be gone a lot. Col. Johnson and Chief Master Sgt. Kristy Earls strive to build those basic resiliency skills, working really hard to instill those in old and young military families.

As a dual military couple, Johnson and his wife, Kristin — a retired, 20-year Air Force critical care air transport nurse — know military life well. Johnson said about six months into his wife’s retirement, she noticed how the structure of the military really impacts those in uniform.

“So when I get to base, someone welcomes me and gives me a checklist,” Johnson said. “Here is your desk, here is what you’re going to be doing. All of that stuff is built in, but it’s not built in for our families. That structure is not there.”

Vance has organizations like the Airmen and Family Readiness Center that helps military spouses, public school liaisons and base representatives involved in school and municipal activities so that challenges of military families can be addressed.

“That structure that you have as a military person is not built in as a family,” Johnson said. “So what Kristin has really been working hard on the spouse side is to try to build some of that structure in. We try to do that for our kids as well.

“We are working to open back up tours of the base,” Johnson said. “I want people to see what goes on behind the gates here. I don’t want it to be a mystery. You pay our salaries. It’s your tax dollars at work. Ultimately, we are here to serve and protect your freedoms and our rights.”

Vance is one of four training bases across the Air Force, three of which are similar: Vance, Columbus AFB in Mississippi and Laughlin AFB in Del Rio, Texas.

“We are a source of pilots for the USAF between those two other bases,” Johnson said. “Here at Vance, we produce about a third of the pilots for the USAF every year. We produced 438 pilots last year, which is way more than we are programmed to do, and that’s all a part of this transition to this new form of pilot training that we are teaching.”

There are numerous different paths pilots can take upon graduation from Vance, whether its choosing to fly helicopters or heavy airplanes, being a fighter or bomber pilot or coming back as instructor pilot, Johnson said.

Straight out of Vance, pilots go to a graduate training program before they get to their operational unit. Once there, it is still months before they are a “mission ready pilot,” Johnson said.

Before pilots are delivering humanitarian aide or dropping bombs, by the time they leave pilot training it’s a year and half to two years.

“When we start to talk about the pilot shortages that exist, we are still about 1,900 pilots short in the Air Force. It takes a really long time to produce a pilot. On average it takes two years and by the time the Air Force gets someone to be an operational pilot they have spent about $2 million on them,” Johnson said.

Life between Vance and Enid is a two-way street, Johnson said.

Economically, when taking payroll, real estate purchases and jobs, Vance has an impact of about $380 million a year on the community, Johnson said. On the flip side, the community’s support of Vance is strong.

“The local economy does a fantastic job of supporting Vance and our families,” he said, “whether it’s providing jobs to spouses or helping us find a place for our folks to live.”