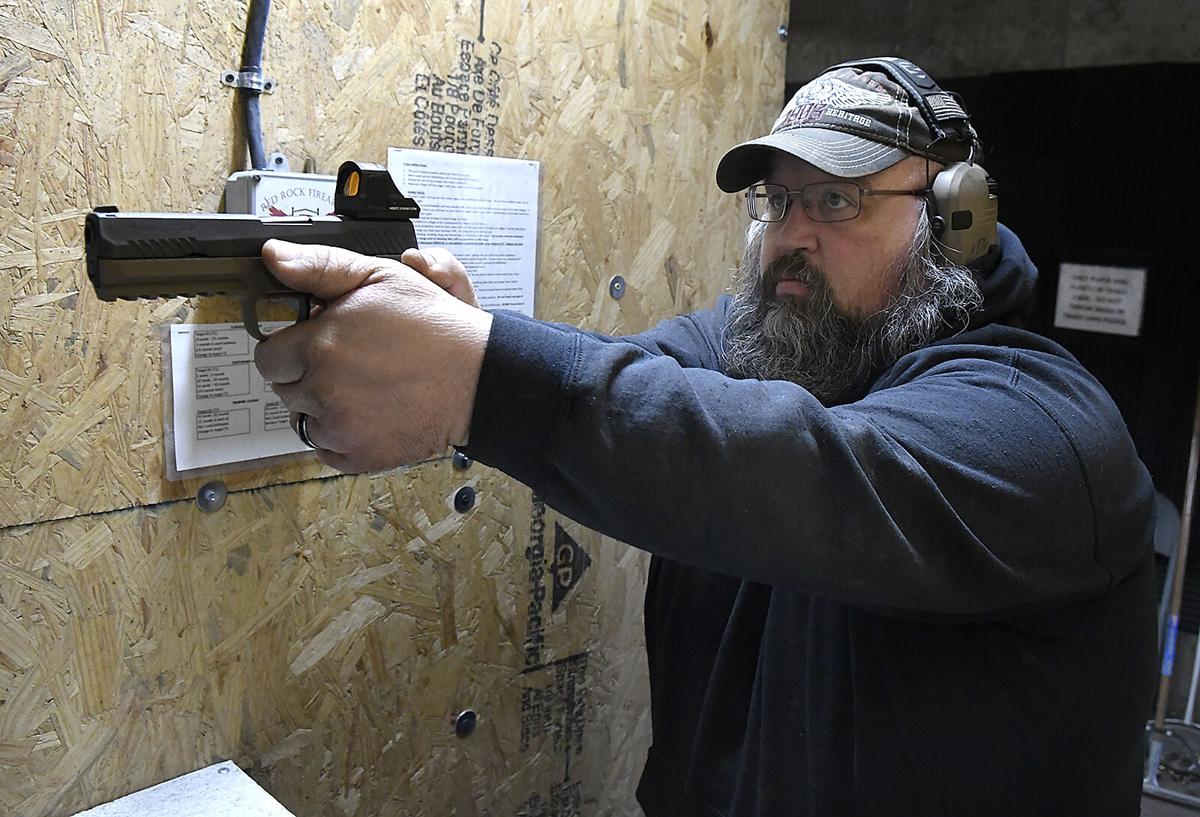 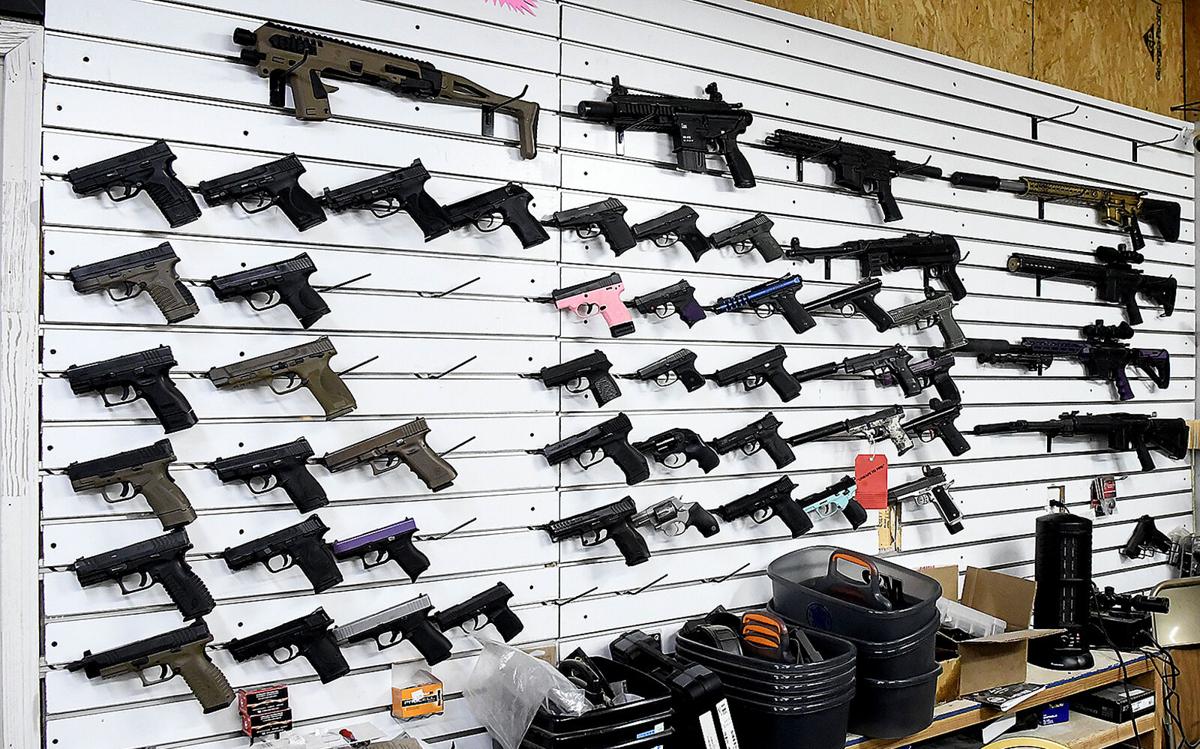 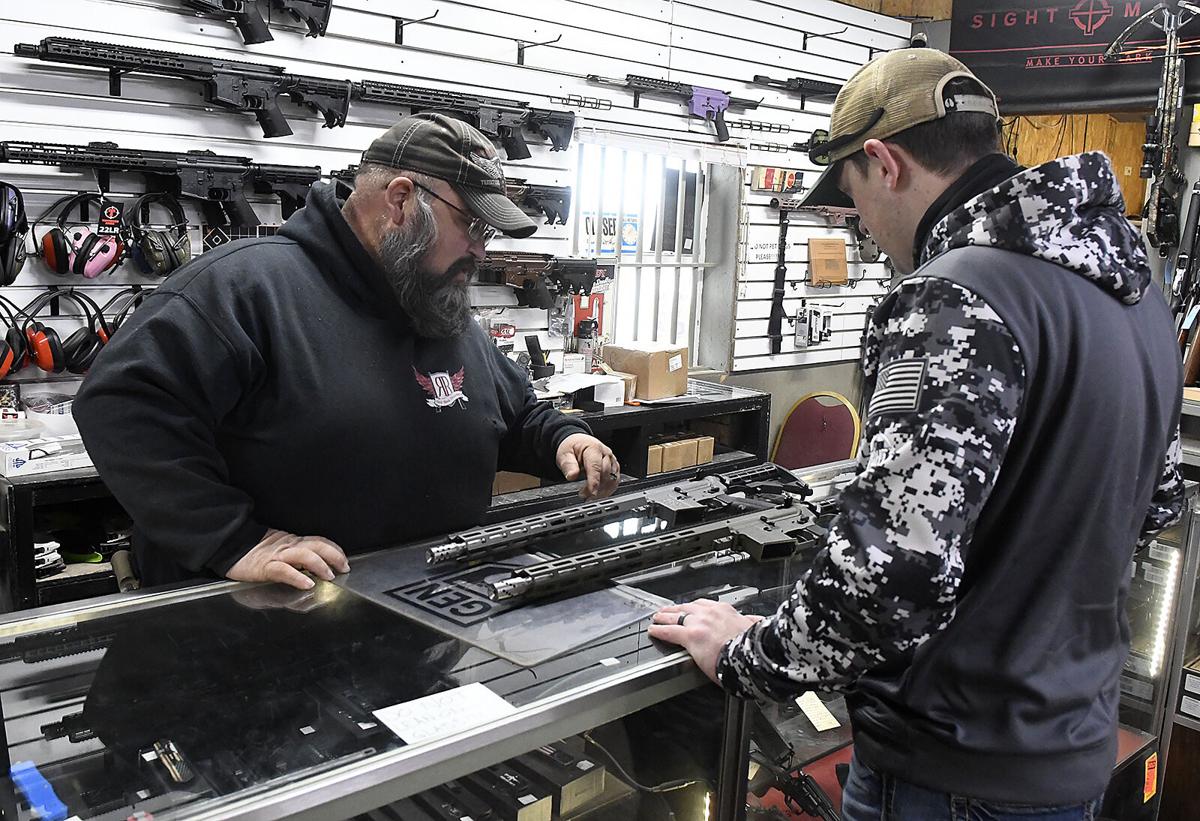 ENID, Okla. — For 10 years, Doug and Kristin da Silva have operated Red Rock Firearms in Enid on the premise of promoting the sport of shooting, gun safety and a strong belief in the Second Amendment.

Doug says the nation’s forefathers put in the right to bear arms right behind the freedom of speech and religion.

“Without that, you can’t guarantee anything else,” he said. “It is literally a production of our liberties.”

Da Silva said he is leery of gun control laws. While no one wants to put firearms in the hands of a criminal, he said he believes universal background checks have created an industry of trying to eliminate target sales of firearms guaranteed by the 1986 Firearms Protection Act.

“If you sit down and read what’s in those bills, it’s very counter to the Second Amendment,” he said.

“The percent of people who actually commit crimes with firearms is so small that if you compare it to traffic accidents and DUIs, I imagine the DUIs is five times the number of people — if you look at the total number of drivers compared to the DUIs on the road,” he said. “That’s why I hate someone who does something negative with a firearm, because it gets so much publicity. You never hear anything positive about the firearms.”

Da Silva attributes the rise in gun sales to “the social environment that we’re in now.”

The shooting range sponsors the playing of the national anthem on local radio, and da Silva speaks with pride of his son, Austin, who is stationed with the U.S. Marines in Norfolk, Va.

They include beginner classes; an introduction to handguns, levels 1 and 2; a conceal carry/open course; basic handgun practical skills; handgun clinic; concealed carry concepts; defensive handgun; and handgun instructor development. Most fees vary from $35 to $240, with some range costs additional.

Both Doug and Kristin grew up around firearms — their families sold guns, and Doug was active in shooting competitions — safety around them was drilled into both.

“Safety is a big part of firearms ownership,” Doug da Silva said. “There’s a market of people who don’t feel comfortable about carrying a weapon for self-defense.”

“A lot of our first-time shooters aren’t kids anymore,” Warren said. “The brain doesn’t work like it used to. I do a lot of work with phobic students, who have to overcome their fear of guns.”

Warren, like the da Silvas, has been around firearms pretty much his entire life.

Beginning classes are “just the basic stuff, hammering on safety,” he said.

“Our community motto is service comes only second to safety,” he said. “We make sure that everybody is safe and bad things don’t happen.”

‘A student of firearms’

Both beginner classes last three hours, and Wilson estimates those classes are from 75 to 80% women.

Level 3 is more work on advanced stuff, including working with the holster.

The Self Defense Act (SDA) course is eight hours conducted by the da Silvas on a Saturday or Sunday and is mandated for an Oklahoma carry permit. The state has a reciprocal agreement with 38 other states on handgun permits, allowing the carrier to carry his or her gun out of state.

The defensive handgun class teaches how a criminal thinks and operates, Wilson said, and how to recognize problems down the road “so you won’t get in trouble.”

“I teach my students to try to avoid trouble so they can have happy, healthy lives,” he said. “If you can’t avoid the situation, we make sure that you can use those skills effectively and not add to the problem.”

Wilson said the education of the firearms owner should be a continuing affair.

“I have had about 800 hours of specific training, but I still to go to class every time to learn something new,” he said. “You have to embrace being a student of firearms. You can’t know it all.”

Responsibility is another lesson for the gun owner.

Wilson emphasized trying to hide a firearm from children in the home isn’t enough anymore.

“Kids have an amazing ability to outsmart parents,” Wilson said. “Don’t underestimate their ability to get into stuff. It’s incredible. The level I, II and III classes are geared toward something that might go wrong. I know training works. Just from the self-defense courses implemented in the mid-1990s you can see firearm accidents have gone down because of education training.”

Da Silva said instructors like Wilson are the reason it’s been successful.

“The nice thing about the firearms community is most people who own firearms want to give people a positive experience with firearms,” he said. “You don’t see too many bad instructors out there.”

Da Silva said he and Kristin still secure their guns from the children living at home even though their children have been trained.

“Kids don’t make the most mature decisions,” he said. “That doesn’t mean you need to keep the kids away from guns. They are more than welcome to come here and shoot. I’m a firm believer that gets rid of the curiosity they may have of guns, and they won’t explore it on their own.”

The more you practice

“It’s still growing,” he said. “The big thing is getting the word out.”

Da Silva said he still prefers to shoot at the store’s outdoor firing range, but with frequent winds of up to 20-30 miles per hour, it’s nice to have the option to go indoors.

Outdoor facility fees are $10 for the lane rental and $3 per person up to four. There is no time limit. The range is open 10 a.m. to 30 minutes before sundown and is closed on Tuesdays and Wednesdays.

Indoor range fees are $10 per hour for the first person on the range and $8 for others.

Memberships are $150 for individuals and $200 for families. Another $50 is added for the indoor range. That comes with unlimited time on the firing range. da Silva said that makes it “a lot more economical.”

“We get all kinds,” da Silva said. “We get a lot of medical professionals, lawyers, all the way down to blue collar. Firearms ownership builds bridges through a lot of societal norms I guess. This gives a man an outlet to shoot at at a reasonable price and not out on some farmers property and shooting and breaking the law. We have customers who have deer leases in Cleo Springs that still come out here and shoot because they don’t want to drive all the way to Cleo Springs. It’s the convenience.”

Success on the range is much like other sports and activities, da Silva said. The more practice, the better you get.

But recreational shooting has been impacted by increased cost of ammunition.

“People like to keep a comfortable supply, and they don’t like to use it up,” he said.

From March to September last year, da Silva said, 16 million applied for background checks regarding firearms. Figuring two boxes of ammunition for each gun would come to 32 million boxes. He said manufactures have been unable to keep up with the supply.

“Our costs have gone up because of demand,” he said. “We have to start raising prices. We can get you the ammo, it just depends how much you want to pay for it.”

DaSilva said still his customer base has remained solid, mainly due to word of mouth.

“We get a lot of word of mouth, that’s one of the nice things about being in a small community,” he said. “At the same time, if something goes wrong word of mouth can hurt you.”

The da Silvas’ typical customer has “changed a lot” over the last year, Doug said. Forty to 50% of customers are first-time firearms operators. That’s one reason for the emphasis on safety classes.

“It’s not like it’s portrayed in the media, where everybody that is a gun owner is reckless,” da Silva said. “We’re not. People want to be responsible firearms operators. We want them to be educated and them to know their rights. The educated person is less likely to break the law if they know the law. We want responsible firearms operators. That’s been real evident with all of the new gun owners and the uptake we see in education classes.”

The first-time buyer, da Silva says, needs to research what type of weapon he or she needs to buy. That’s one reason the store offers rentals. He recommends customers try guns before purchasing.

“We have 30 or some handguns out there,” he said. “We actually get a lot of people to take the classes, rent the guns for the class to get safety training and then purchase the firearm they want,” he said. “You like to know something before you spend $300 to $400. They can try it on before the buy it per se.”

Rentals can event attract experienced shooters, who often want to try different guns after having a weapon for 10 years or so, da Silva said.

Compacted concealed pistols designed for self-defense are the most popular items, along with sporting rifles. The rifle is versatile and has an adjustable stock that can fit youths and adults. The recoil is not high. Any size person can shoot it, da Silva said.

Kristin’s presence has attracted a number of female customers, he said.

“Female customers like to come into a gun store and talk with a lady to get her point of view,” he said. His wife concurred.

“A lot more women have been buying guns,” Kristin da Silva said. “It makes a difference for them to talk with me. I grew up around guns. My dad had a store.”