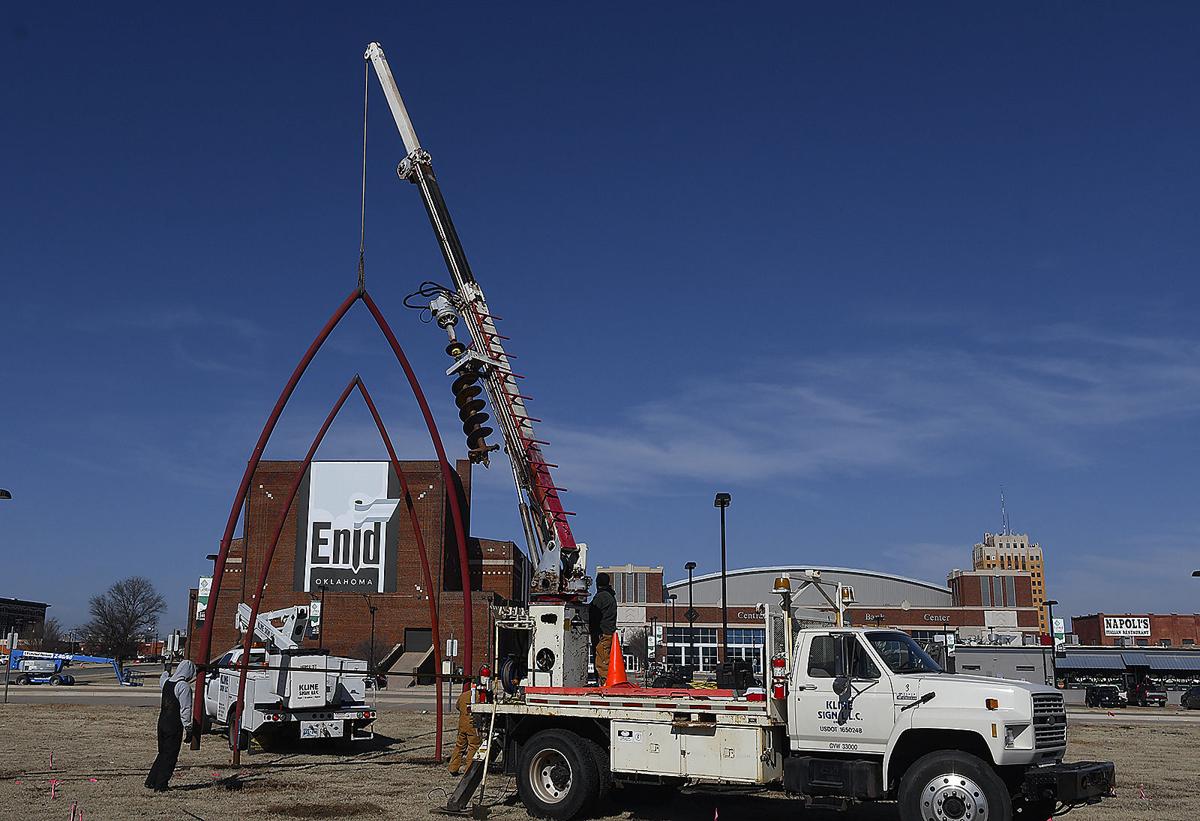 A crane lifts a section of the art project "Under Her Wing was the Universe" Monday, Feb. 4, 2019, in downtown Enid. 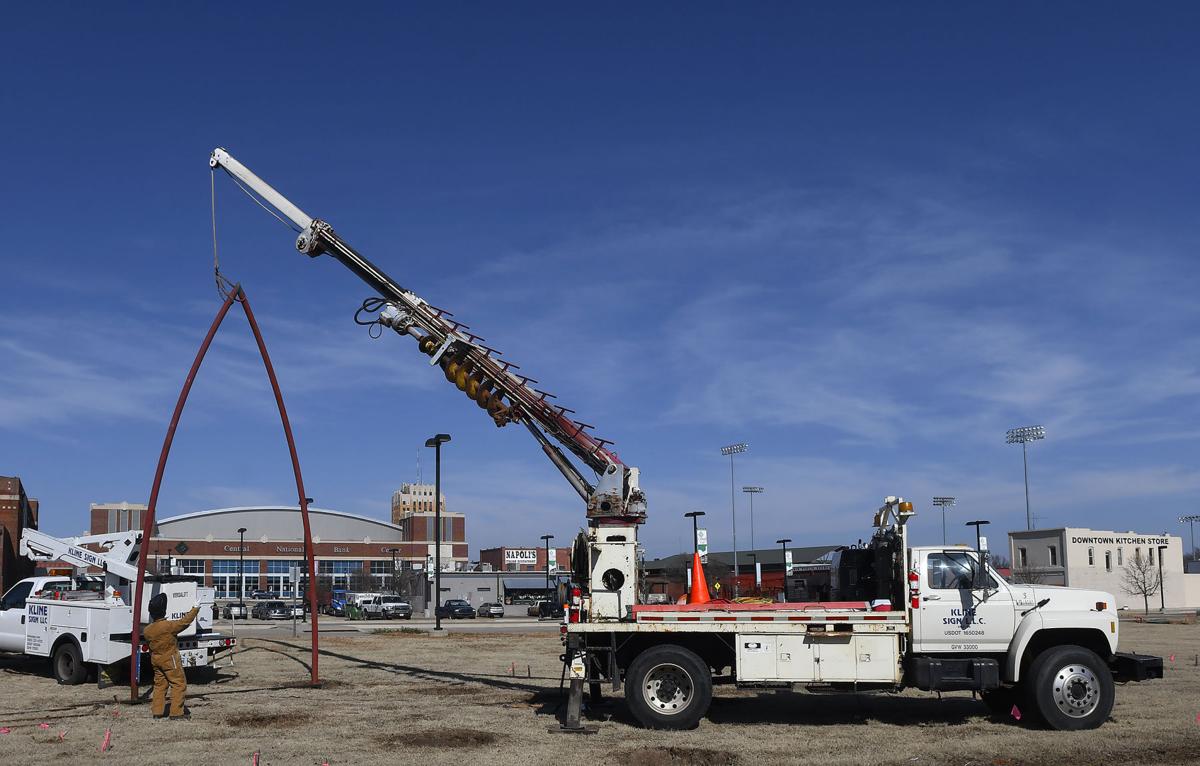 Workers secure the first section of the art project "Under Her Wing was the Universe" into place Monday, Feb. 4, 2019, in downtown Enid. 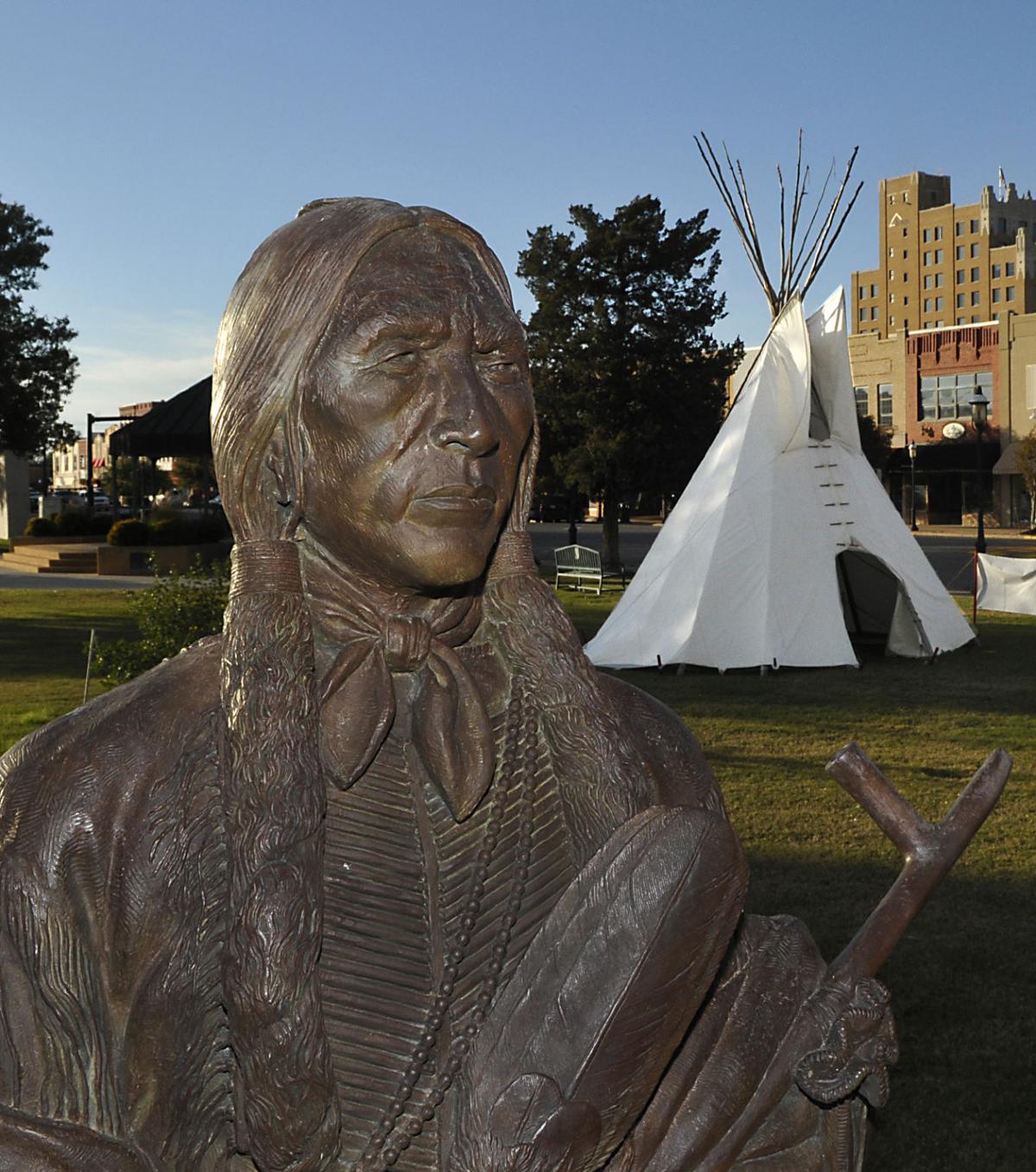 An indian lodge is seen behind the "Keeper of the Plains" statue. The lodge was erected by the Enid Intertribal Indian Club in recognition of of Native American Week. 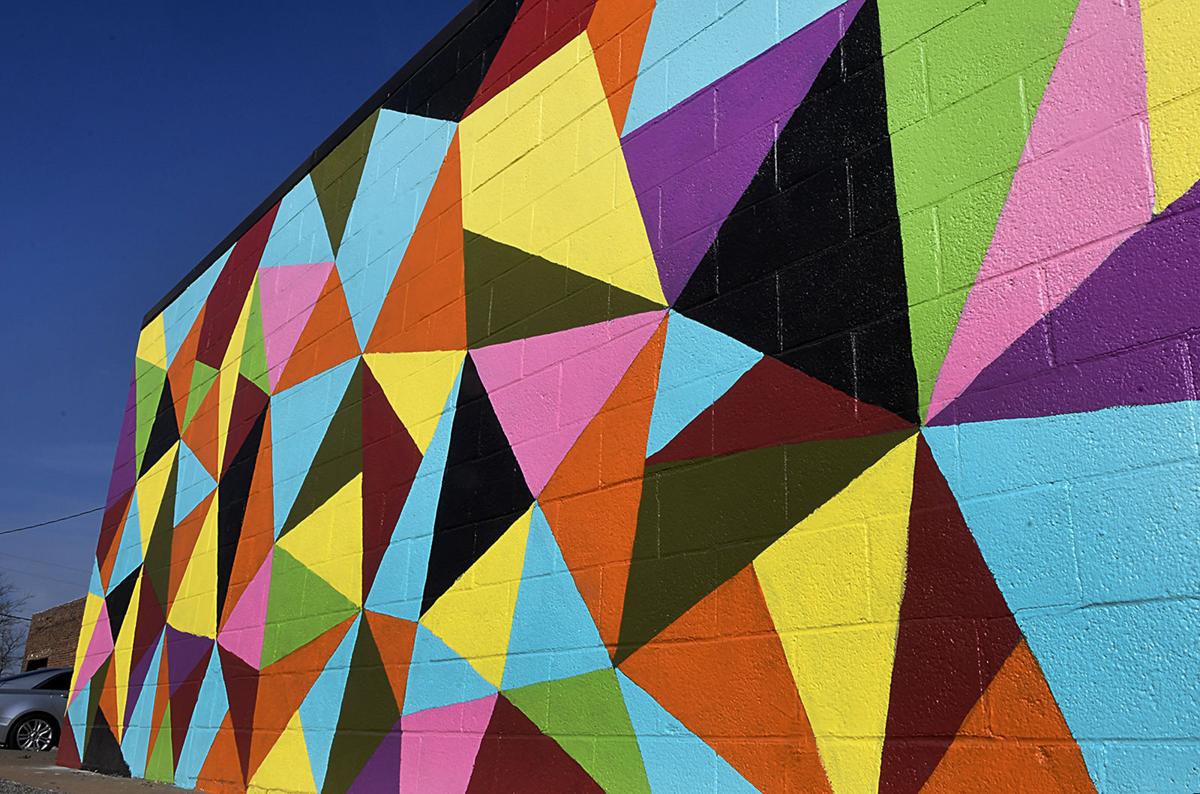 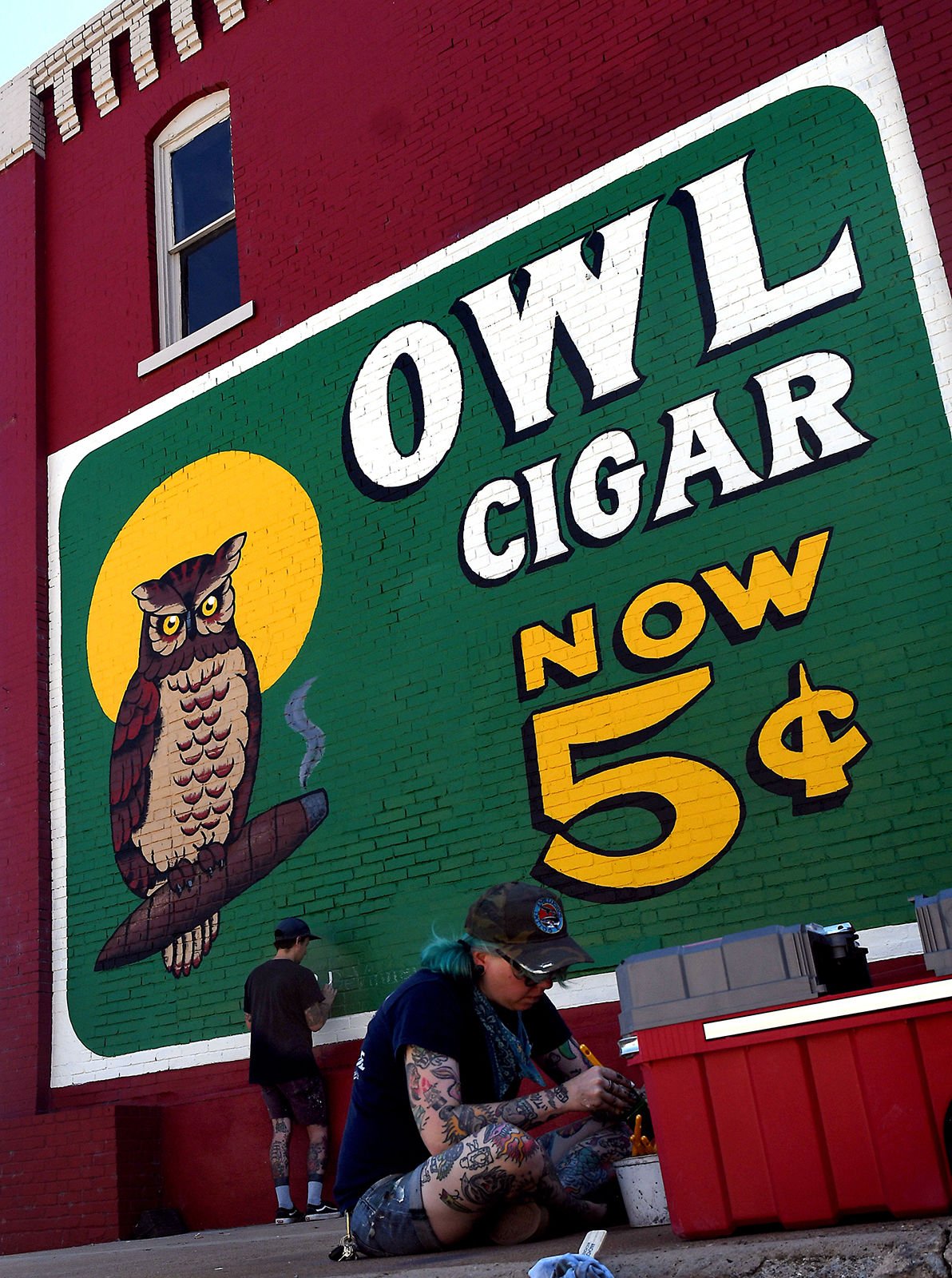 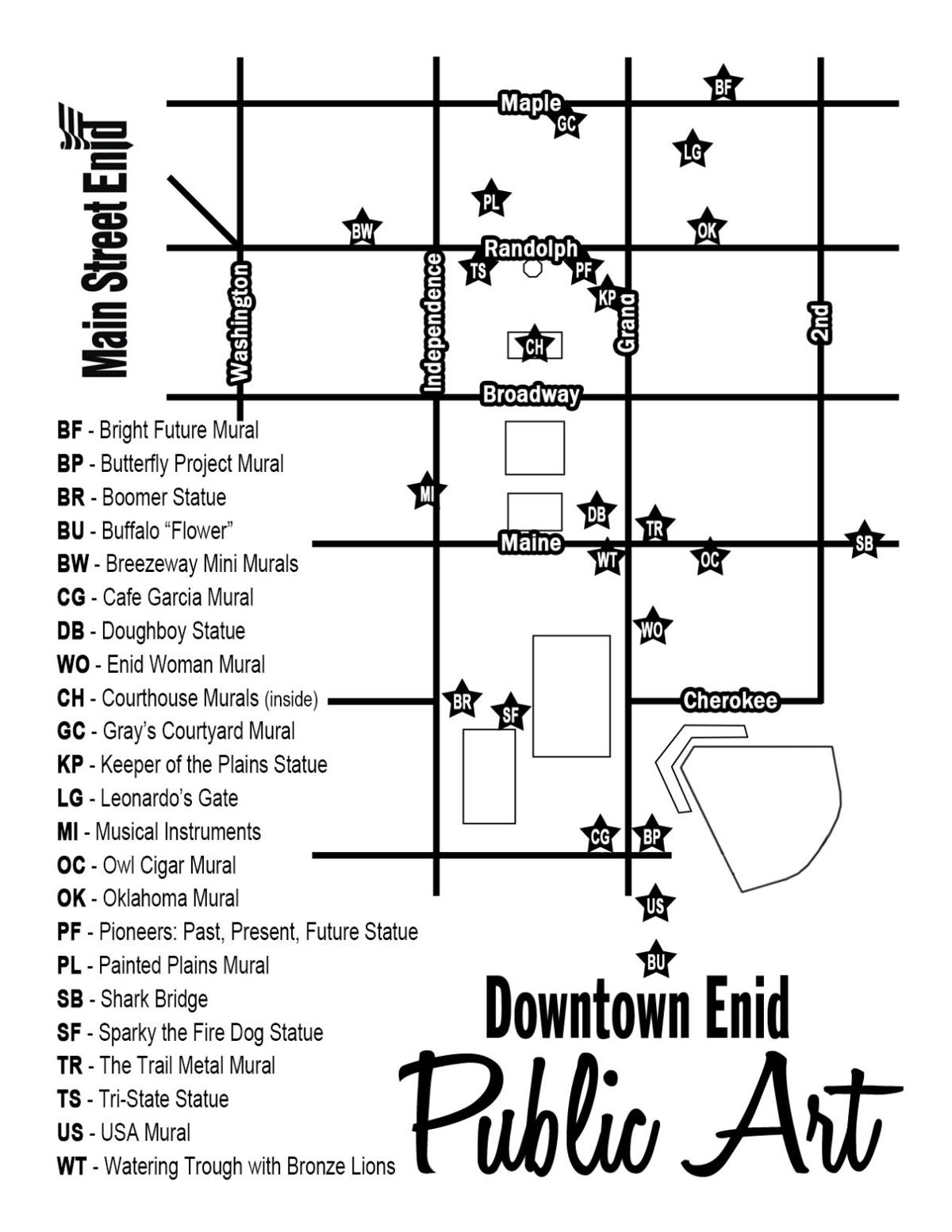 ENID, Okla. — As Enid continues to grow, artwork downtown has taken off in recent years, with projects seemingly popping up around every corner.

Tompkins provided a timeline describing just a few of the art projects undertaken in recent years downtown or nearby.

• Mini murals were made as part of the Breezeway Pocket Park project, and Tompkins said the project was “when we realized how fun it is to have community members help paint, with the Northwest Oklahoma Association of REALTORS.”

• “The Butterfly Project,” a mural by Rick Sinnett, was painted on the side of the Enid Public Schools downtown building at 323 S. Grand.

• “The Trail,” a metal mural by Paul Stone, was created by numerous lo cal businesspeople and honors Bob Klemme. It’s located on the Garfield Furniture & Mattress building at 123 S. Grand.

• “Painted Plains,” by Jason Pawley, was painted on the back of PaneVino at 124 W. Randolph.

• “Bright Future,” with 75 spaces painted by community residents on the city’s birthday, was created at Creative HQ, 222 E. Maple.

• “David’s Doodles,” a mural by Tompkins, was a tribute to David Ezzell. The last doodle was painted by his family and friends on the side of son Ben Ezzell’s wood shop, 324 E. Randolph.

• “Enid Woman,” a mural painted by Jack Fowler, was created on the south side of Garfield Furniture at 205 S. Grand. It was also commissioned by the same business.

• “Under Her Wing was the Universe,” a sculptural pavilion by Romy Owens, is under construction south of the Central National Bank Center. Although it faced a number of delays, ground was broken earlier this year and the project’s construction efforts are well underway. Enid City Commission approved the location and some funding for the project in a July 2017 meeting.

• “Lazy Circles in the Sky,” on the northeast corner of Garriott and Grand, is a metal sculpture by Michael Shuck designed to “invite people to turn toward downtown.” The project is one of the endeavors by Public Arts Commission of Enid and was approved by Enid City Commission in October.

• “Atelier Scissortail,” by Tompkins, will be a 75 foot by 17 foot outdoor mural to “signify hope taking flight at Atelier,” a creative outpost for artists at 339 E. Maple. The project is also east of downtown and not a Main Street Enid project.

There have been a number of other murals across Enid too, Tompkins said.

“Members of the Enid community have had fun, collaborative experiences with several recent murals in Enid,” Tompkins said. “Being part of these art pieces creates a sense of pride, ownership and connection. They have connected to the art, to the community and to each other by being part of these projects.”

Main Street Enid gathered a group of artists and poets and have various street art projects in mind, with poems from local writers for the downtown sidewalks, she said.

A recent piece of street art was painted by Christy Timberlake on the side of Jackson Diamond Jewelers downtown. Tompkins said the organization plans to gather the artists and poets again soon to create more art this year.

Public art is an undertaking that can have an enormous impact on a community, Tompkins said.

She referenced a Gallup poll that found aesthetics is one of the top three reasons residents attach to a community and “interesting places help connect people to a place and make them feel at home, and workforce recruitment is imperative to growing businesses.”

“‘Under Her Wing was the Universe’ by Romy Owens has already connected hundreds of people to her project in Enid, and we can’t wait for them to travel to Enid and experience this amazing art they contributed to,” Tompkins said.

“Unusual pieces send signals that our community welcomes creativity and innovation, which is what many young people want to feel. We should keep this in mind when we wonder how to get our children and grandchildren to stay in Enid or come back to raise a family,” Tompkins said.

Public art such as “David’s Doodles” provide meaning, belonging and healing, Tompkins said. Others, such as “Bright Future”, provide social interaction and shared ownership, she said, while some, such as “The Trail,” are a collaborative effort to celebrate history.

Main Street Enid has more matching funds for its downtown mural program thanks to Bert Mackie on behalf of ONEOK Inc., Tompkins said.

“Our public art creates a unique identity. It’s where people take photos, it’s what’s on postcards and shared on social media. Walls and pieces of land can go unnoticed, or they can generate social, cultural and economic value,” she said.

Construction is ongoing as of May 1, 2019, for "Under Her Wing was the Universe." The project has met many delays since it was approved by the…