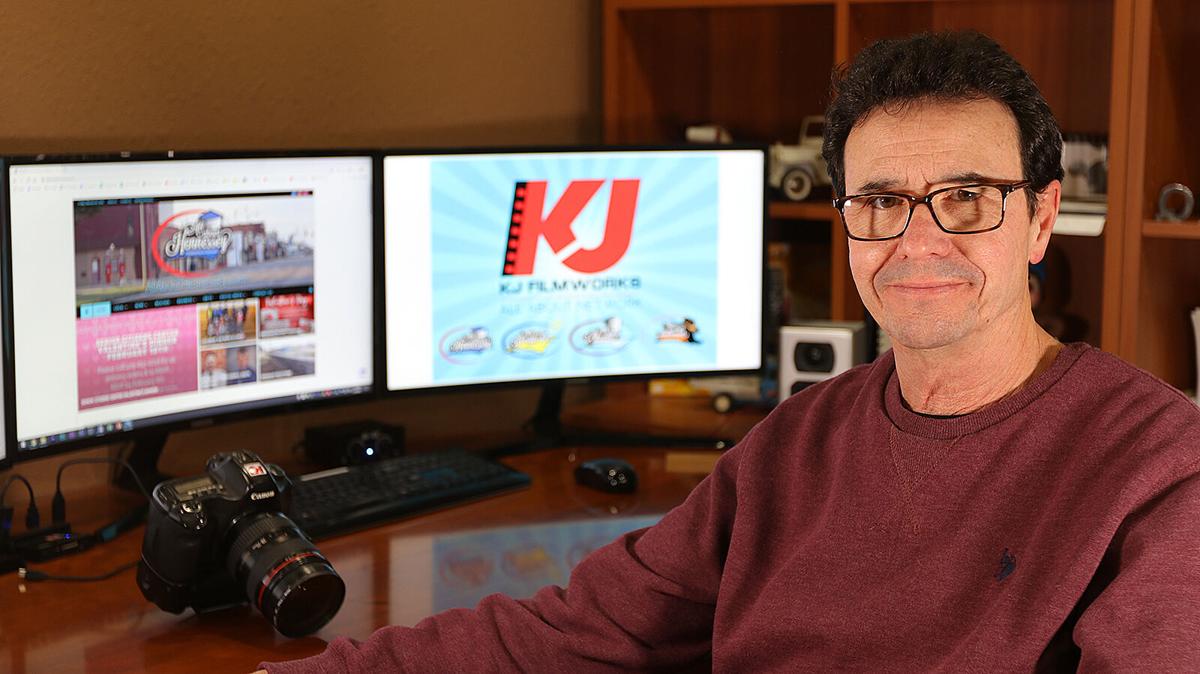 Jack Quirk sits in his office at K.J. Filmworks in Hennessey. (Provided) 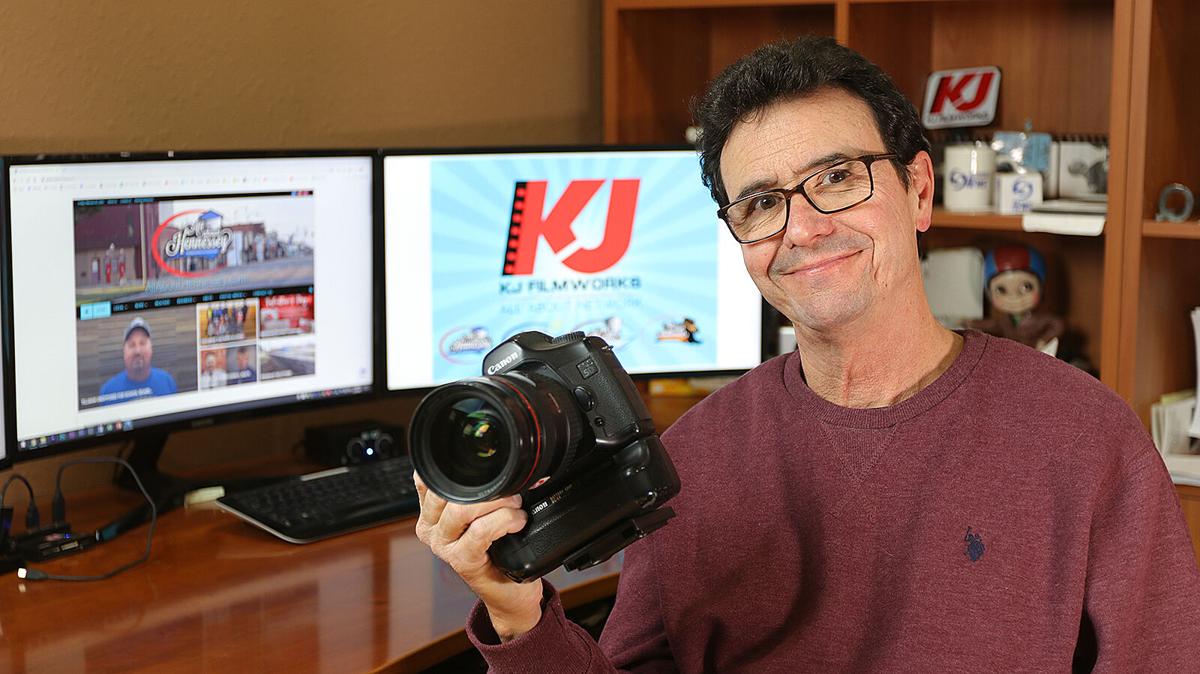 Jack Quirk sits in his office at KJ Filmworks in Hennessey. “There was a true need for real-time news,” Quirk said, which prompted him to start All About Hennessey, a local newspaper, website and social media network, to promote and consolidate the “real-time” news of the small town of 2,500. (Photo provided)

Jack Quirk sits in his office at K.J. Filmworks in Hennessey. (Provided)

Jack Quirk sits in his office at KJ Filmworks in Hennessey. “There was a true need for real-time news,” Quirk said, which prompted him to start All About Hennessey, a local newspaper, website and social media network, to promote and consolidate the “real-time” news of the small town of 2,500. (Photo provided)

HENNESSEY, Okla. — When videographer Jack Quirk moved to Hennessey in 1980, he had no idea that 40 years later he’d still be there, so rooted into the community.

“It’s been a lot of fun,” he said in a recent interview, in which he was on the other side of camera.

Quirk was born into the news media industry and has himself worked in the field for more than four decades — his father, John, was a NBC news photographer who covered three presidencies and took the famous shot of John F. Kennedy Jr. saluting his father’s casket.

The Rhode Island native came to northwest Oklahoma upon a friend’s invitation and landed the position of Enid bureau chief for Oklahoma City’s KOCO Channel 5 TV station. Based from the 13th floor of Enid’s Broadway Tower, he chased down stories and storms.

It was then, nearly 38 years ago, Quirk founded KJ Filmworks, formerly known as KJ Productions, which has led to partnerships and networking with people all over the world.

But local community is what he enjoys the most.

“Hennessey is my Mayberry,” Quirk said.

That’s how All About Hennessey (AAH) was born.

“All About Hennessey started with a rodeo that got rained out,” Quirk said. At the time, there was no way to get the information out quickly. The local newspaper was only a weekly and had no social media channel.

“I started a Facebook page and got 20 follows that first week,” he said. Within a month, he had 500 followers on his All About Hennessey page. That was August 2017. Today that same Facebook page is nearing 8,000 followers.

“There was a true need for real-time news,” Quirk commented.

“We are a micro news agency helping people know what’s going on,” Quirk said, adding AAH has become more than the local news source, it serves as the town’s tourism and visitors’ bureau too.

AAH initially provided a digital newsletter, which became a full-fledged digital newspaper with limited printed editions for people who don’t have Internet access. The digital newspaper is full color and highly interactive with links. It also can become a PDF so people can print it for their scrapbooks, Quirk said. There are now more than 1,000 subscribers to the AAH newspaper.

According to Quirk, the main feature of the All About Hennessey website is it consolidated the nine calendars of Hennessey, including the school, town council, senior citizen center and the public library calendars. Any organization or group that wants to be included can easily be incorporated thanks to the magic of KJ Filmworks’ webmaster and coder Angie Bruner, Quirk said.

Ads keep the AAH website afloat, thanks to what he calls “sponsor-partners.” He said local businesses and the town council are eager to support the grassroots effort to keep the community apprised of town happenings.

‘What keeps us going’

Prior to All About Hennessey’s appearance, the town’s residents were not informed in real time about things such as water line breaks or water being shut off. Everyone would call Town Hall and “blow up their phones.”

Now with AAH’s existence, town employees are proactive in contacting All About Hennessey to post notices online beforehand or the instant a break happens, thus keeping residents informed.

“A day never goes by that we don’t get a ‘thank you’ or ‘how amazing’ All About Hennessey is,” Quirk said. “That’s what keeps us going.”

A look at the news

Perhaps a unique aspect — and advantage — to All About Hennessey is Quirk’s videography background.

“KJ Filmworks has allowed us to offer videos and photography most (social media) pages are not capable of,” he said, adding AAH can show people news through video.

A recent example was when the Dover-Crescent blacktop washed out; other news agencies wouldn’t have covered that like AAH did, but Quirk felt it was important for the locals to actually see the road was out.

AAH also features the “All About Hennessey Show.” Quirk calls it a variety show; the weekly video has news of the week, school news and a special guest who is interviewed.

Quirk uses KJ Filmworks to subtly promote small-town America, too. He often will film local non-descript locations and submit it as stock footage for TV shows and movies.

His footage has been repeatedly used in transition shots in Hallmark movies. Hennessey’s main street actually made an appearance in the second season of the “Big Bang Theory” spinoff “Young Sheldon.”

The popularity of All About Hennessey has spread to other communities who’ve expressed the desire to have their own version, so Quirk created the All About Network to support his micro news model.

He’s already developed All About Kingfisher, All About Stillwater and All About Okeene Facebook pages, and additional ones for Seiling and Edmond are in the works. Kingfisher and Stillwater recently got their own websites launched, too.

The All About Network follows journalism ethics, as Quirk is a member of Society of Professional Journalists and National Press Photographers Association.

Tiny things of the town

What’s most validating to Quirk is Oklahoma news stations follow AAH and reach out to him frequently to use his stories and videos. He’s been affiliated with NBC, ABC, CBS and FOX.

He regularly partners with other state and national news agencies and outlets as well. His work has appeared on CNN, The Weather Channel, Discovery and The History Channel, to name a few.

Quirk credits his KJ Filmworks staff as being the real heroes of All About Network: He has four employees working for him, including his “rock star” executive producer Renee Settlemires.

“What makes it work are the teeny tiny things the town cares about. That’s the beauty of it,” Quirk said.