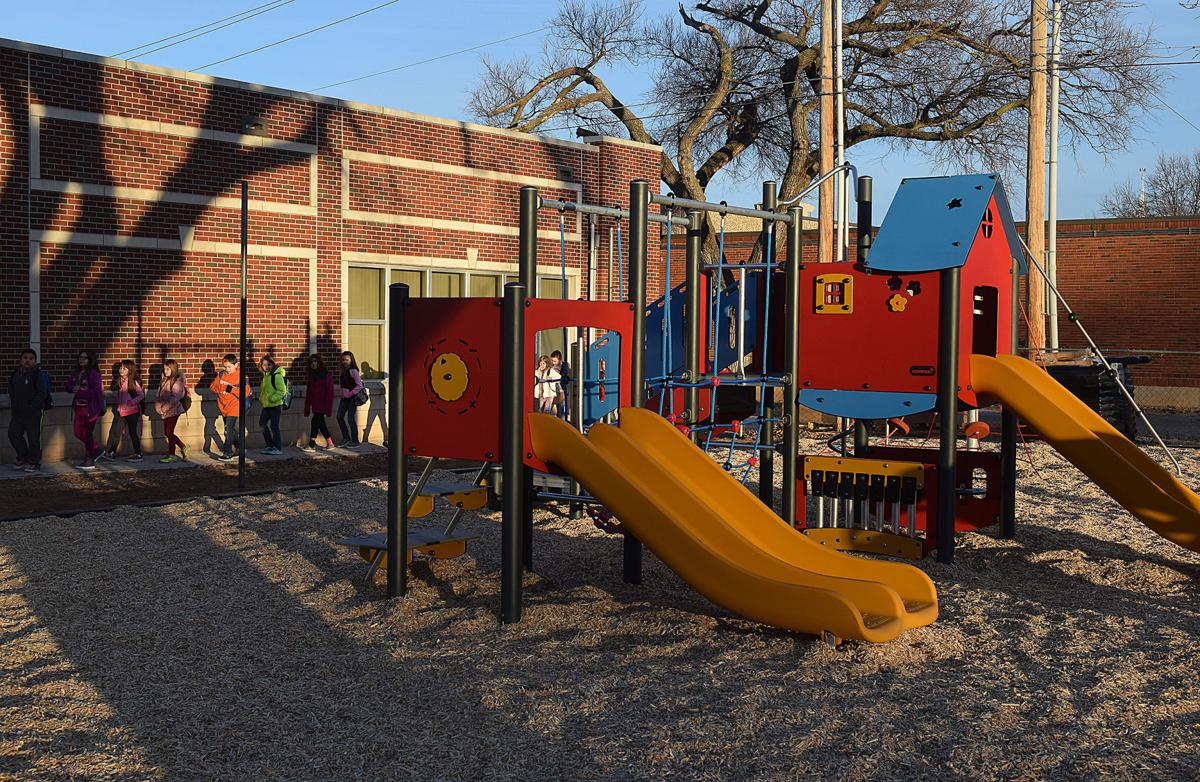 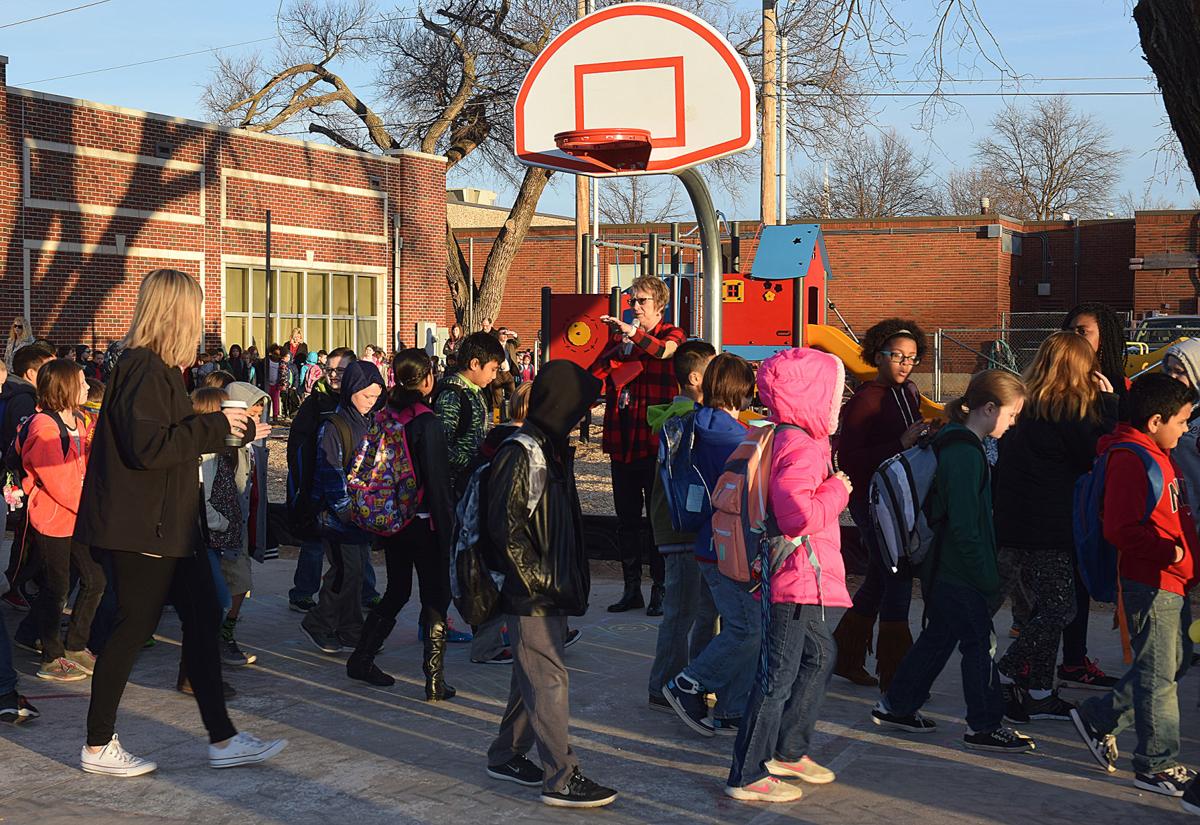 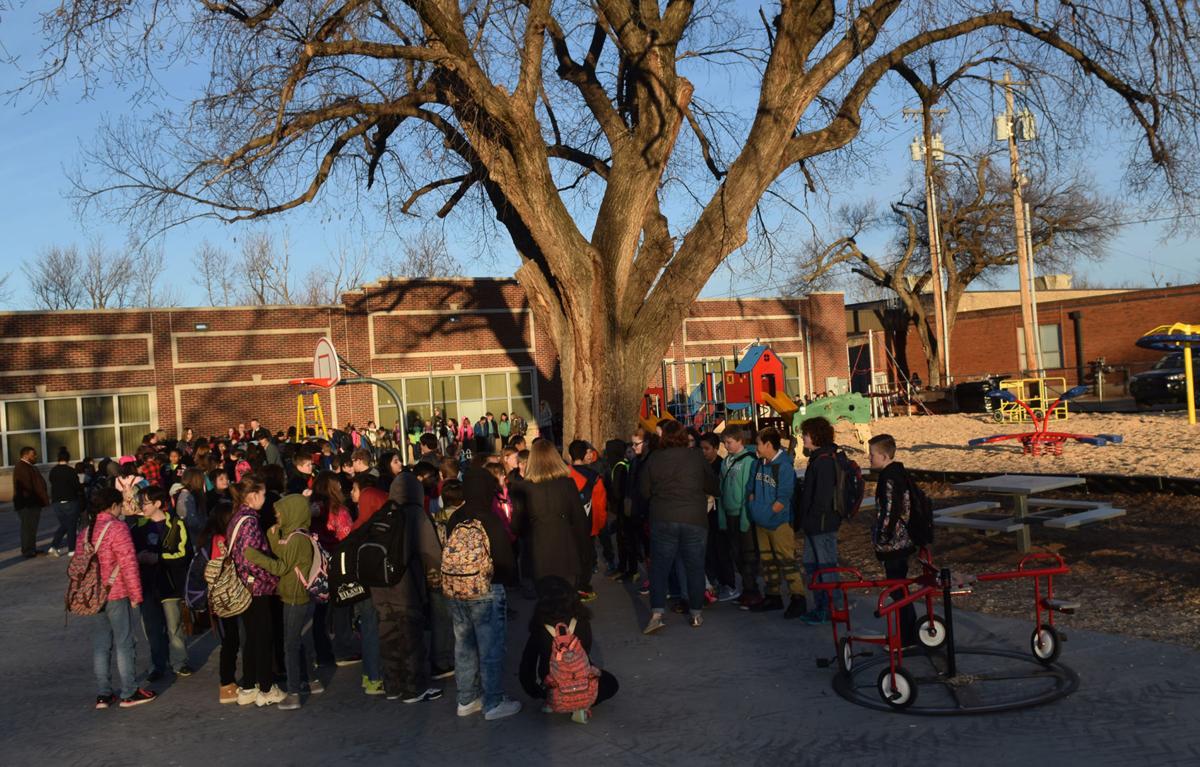 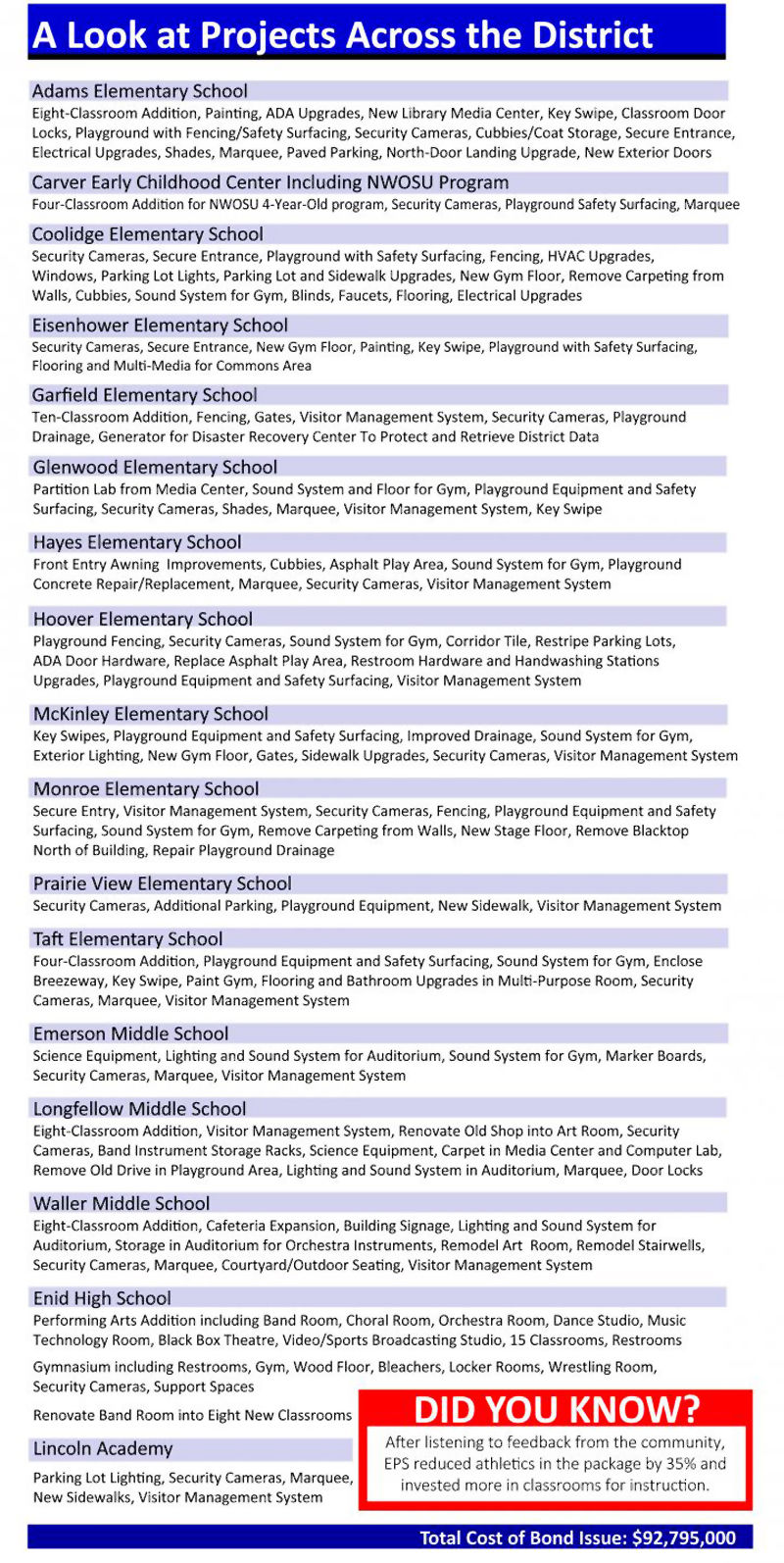 Enid Public Schools has a list of bond issue projects per school on its website, www.enidpublicschools.org/bondprogress, with more information about the overall issue. Items on the list are in varying stages of completion, according to district officials.

Enid Public Schools has a list of bond issue projects per school on its website, www.enidpublicschools.org/bondprogress, with more information about the overall issue. Items on the list are in varying stages of completion, according to district officials.

ENID, Okla. — “Just because there’s not something you can see, it doesn’t mean we’re not making progress.”

Enid Public Schools Su­­­­­perintendent Darrell Floyd summed up implementation of a districtwide, multi-million bond issue in that one sentence.

“Even though folks haven’t seen dirt turned over in some areas, progress is being made on the architectural design phase,” Floyd said.

EPS Chief Financial Officer Karl White said the district is working with the city of Enid and utility companies because both Adams Elementary School and Longfellow Middle School have utility easements underneath where the district is proposing to build. 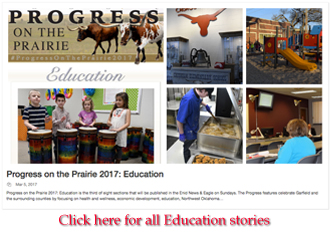 Other projects in the design phase are at Adams and a Northwestern Okla­homa State University-Enid campus classroom addition being designed by Easley Associates, Architects. Longfellow Middle School and Garfield Elementary School projects are both being designed by The Stacy Group.

The bond issue, approved by voters in all but one of 21 precincts in the district in February 2016, authorized spending $90.23 million, including interest and debt service, for renovations, improvements and new construction projects. An additional $2,565,000 was approved to replace part of an aging bus fleet.

Some of the projects — like at Eisenhower Elementary School — are almost completed, but others remain in the design phase.

Regarding the high school, White said architects have met several times, and they continue to tweak designs to ensure the best for EPS and to save the district money in the long run.

“That way we don’t get into the construction phase and end up having to make a bunch of changes,” Floyd said. “That design will provide students with a competition gym that we’ve never had and has been talked about for decades in the community. It will also help ease the flow of foot traffic within the buildings, especially on the east side of campus.”

Architects are working to integrate the architectural styles of EHS into the new structures, allowing a look of continuity and to make the building aesthetically appealing, Floyd said. The design firm for EHS is MA+ Architecture.

“It’s important to note that the architects have met with practitioners — the teachers that are the boots on the ground — and have gotten their ideas on all the projects and what they would like to see included and folded it into their design,” Floyd said.

White said the design phase is the least noticeable phase to the public because it’s all behind-the-scenes work.

“But those construction documents will tell the workers where to put each beam, each door, window, and so they are pretty, detailed documents,” White said. “It’s not apparent to the average citizen that there is a great deal of work going on behind the scenes. Not only do the documents impact the quality of the building but they can save you significant money. You’re utilizing the same materials in multiple locations, so the way we were able to structure out budget was a large part of the planning process.”

Progress on the Prairie 2017: Education

Progress on the Prairie 2017: Education is the third of eight sections that will be published in the Enid News & Eagle on Sundays. The Pro…

ENID — Funeral Service for Jerald Bushman, 90, will be 1:30P.M., Tuesday, at Maine Church of the Nazarene. Burial, 4:00P.M. in Alva Cemetery. Visitation with the family, Monday from 5:30-7:00P.M. at Anderson-Burris Funeral Home. www.andersonburris.com

ENID — A Celebration of Life Service for Sonya Booher, 78, Enid, will be at a later date. Sonya was born June 14, 1942, and passed away April 8, 2021. Arrangements: Anderson-Burris Funeral Home & Crematory. www.andersonburris.com.