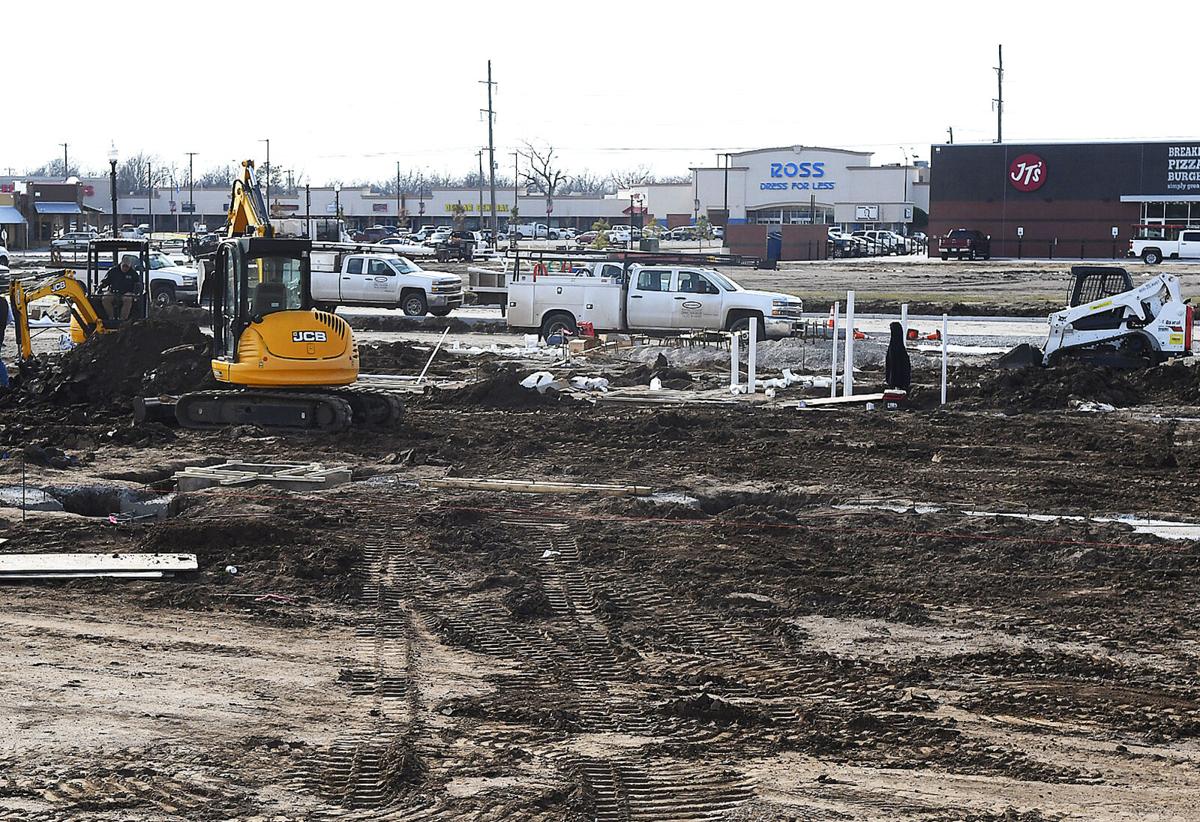 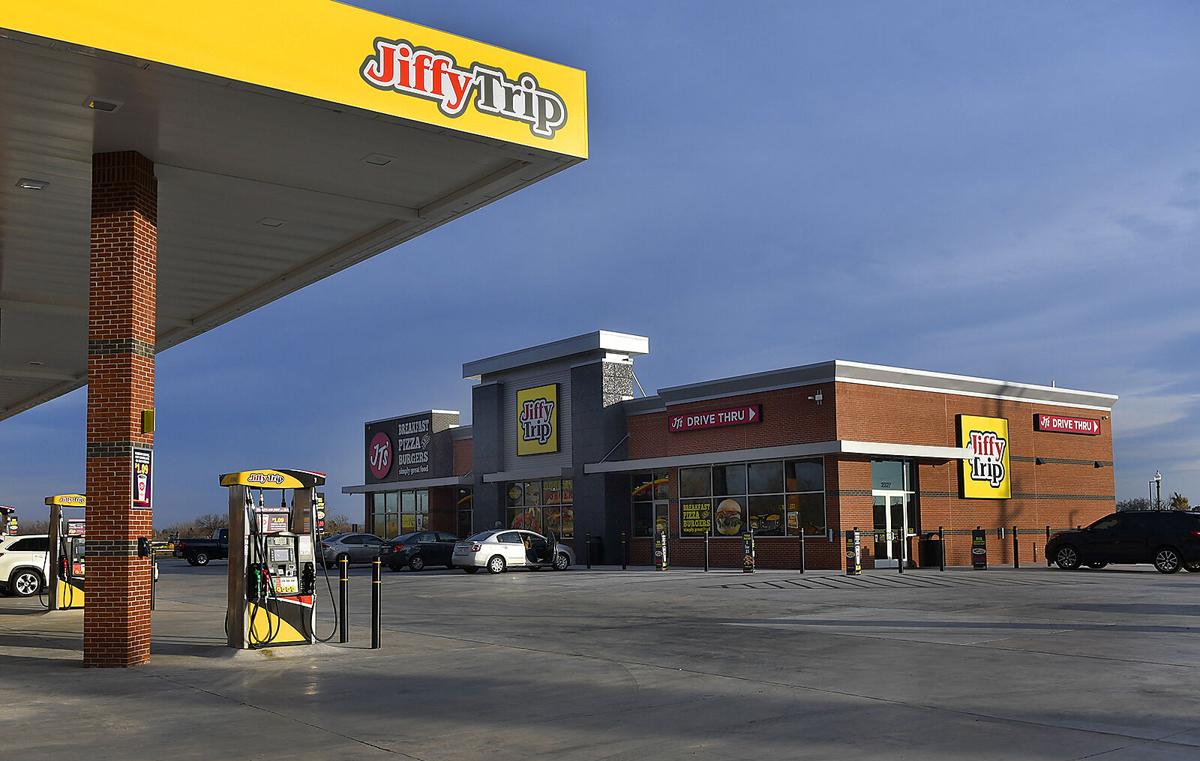 Cars sit in front of the Jiffy Trip at Garriott and Cleveland shortly after it opened in 2021. (Billy Hefton / Enid News & Eagle) 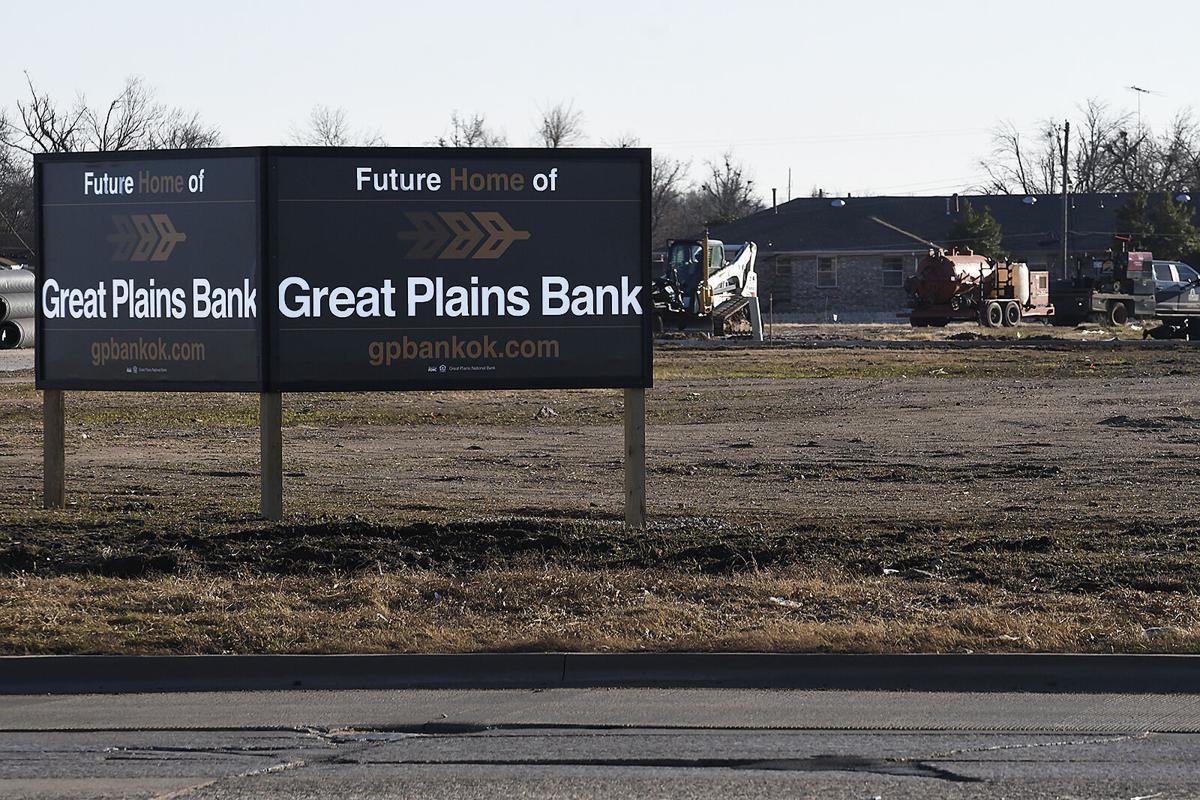 A sign reveals the future home of Great Plains Bank in The District shopping center on the corner of Garriott and Cleveland Jan. 12, 2021. (Billy Hefton / Enid News & Eagle) 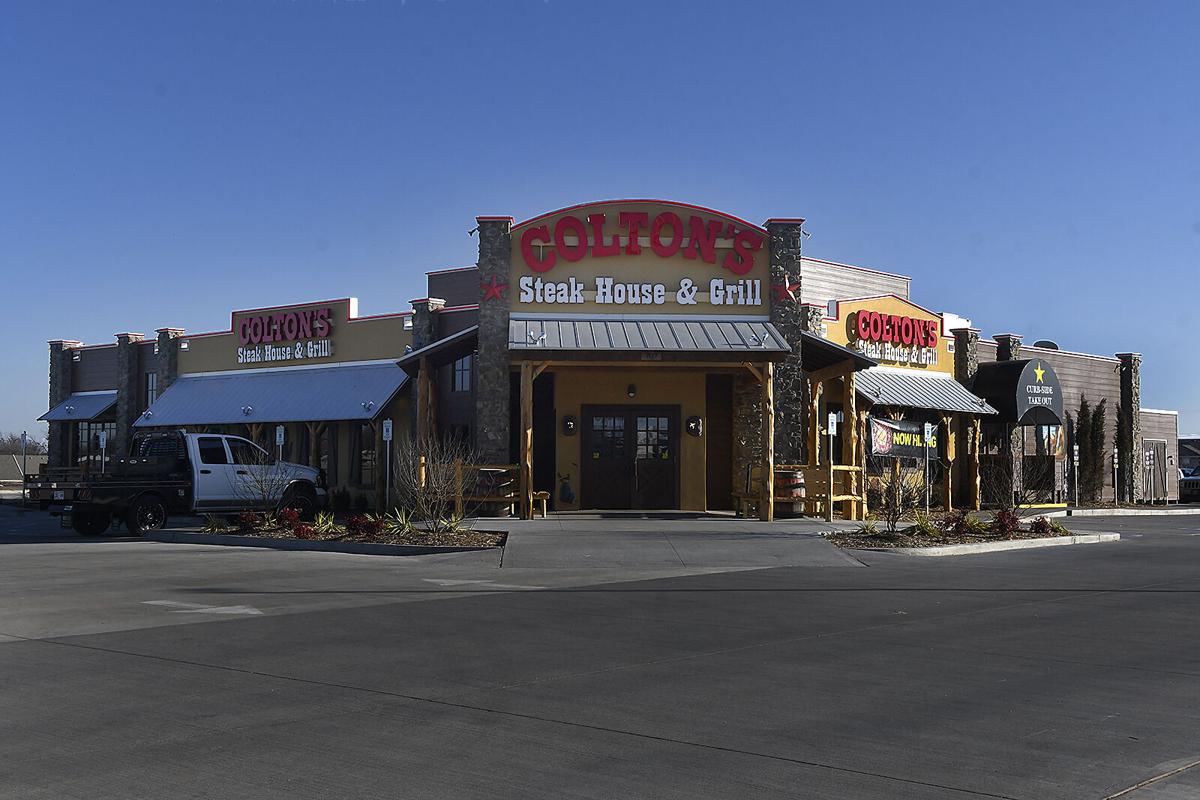 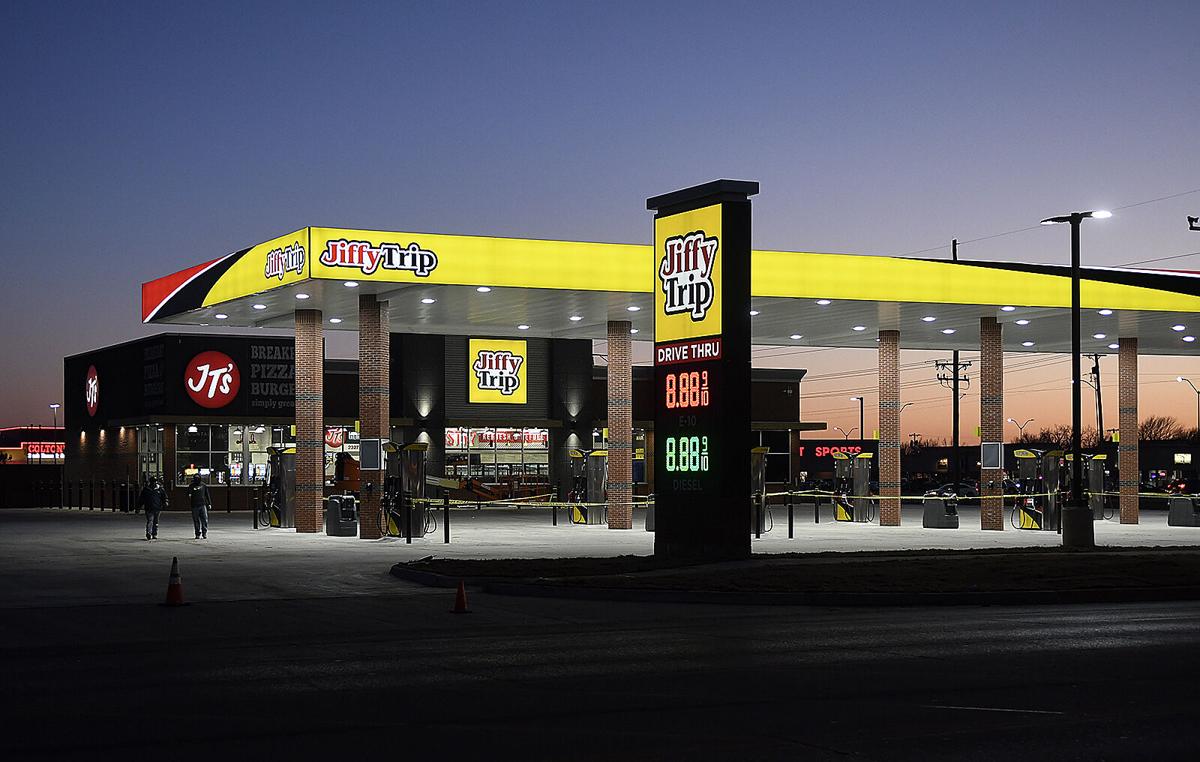 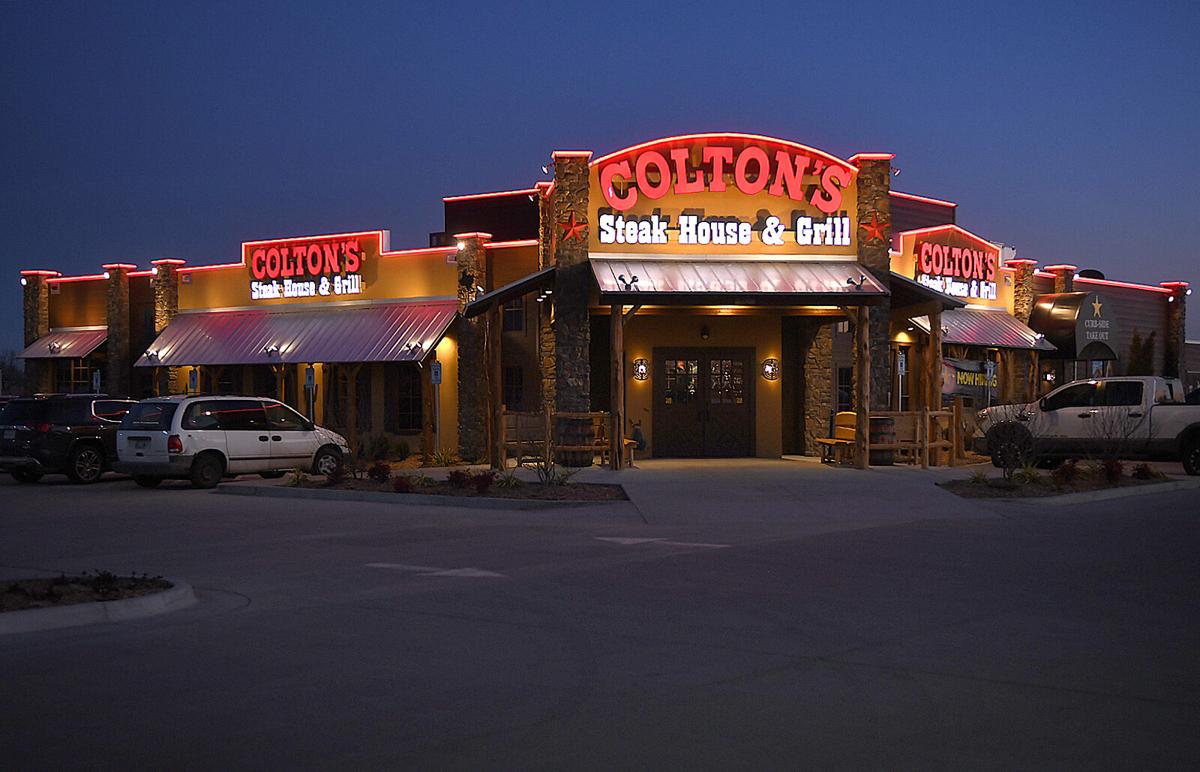 Cars sit in front of the Jiffy Trip at Garriott and Cleveland shortly after it opened in 2021. (Billy Hefton / Enid News & Eagle)

A sign reveals the future home of Great Plains Bank in The District shopping center on the corner of Garriott and Cleveland Jan. 12, 2021. (Billy Hefton / Enid News & Eagle)

ENID, Okla. — While other businesses have made visible progress in The District, Enid’s up-and-coming retail corridor, development plans still are on hold for a new movie theater and trampoline park — largely because of the COVID-19 pandemic.

Lisa Powell, executive director of Enid Regional Development Alliance, said the pandemic has “cut the legs out” from plans her office, local property developers and the city had concerning the 20-acre lot on the southeast corner of Cleveland and Garriott.

Indoor entertainment like going to a movie theater has seen less demand since March, she said.

“In the way these things go, any progress we have made previously will start from scratch again once we emerge out of the consequences of this pandemic,” Powell said. “The landscape will look very differently than it did 12 months ago.”

Waiting on the tracks

City commissioners in June 2020 approved offering Apex Cinemas an incentive package with a $3.5 million rebate, to be paid over 15 years, to develop the donated 7.5-acre movie theater tract in The District.

The plan was recommended by the board of directors for ERDA, the city-funded organization Powell called “the concierge” for businesses new to the Enid community. Negotiations on the incentive package took three or four months, she said.

During the same meeting, commissioners moved to fully reopen the city from its COVID-19 pandemic shutdown restrictions a month ahead of scheduled, in a close 4-3 vote, to follow Gov. Kevin Stitt’s statewide reopening plan.

City and health officials at the time said they believed the plan to be doable, as cases in Enid and the rest of Garfield County had not been significantly increasing. Several weeks later, though, both new cases and deaths began to climb.

Meanwhile, movie theaters nationwide, including Enid’s AMC Theatres in Oakwood Mall, were forced to close their doors when the pandemic began. Once they were allowed to reopen, theaters still had trouble bringing in audiences as cases continued to spike.

While AMC previously announced plans to file for bankruptcy, since December the movie theater chain has secured enough equity and debt capital to remain in business through much of 2021, its CEO said in January.

Cash from stock surges were largely credited with rescuing AMC from more than $600 million in debt. Talk of imminent bankruptcy is now “off the table,” CEO Adam Aron said three weeks ago.

However, the rest of the movie theater industry still is an unknown — or as developer Kyle Williams called it, a “train wreck out there.”

“If I was doing it, I’d be thinking twice about it,” Williams said, though he did see a silver lining with the still-empty lot. “What if we’d been a third of the way done with the theater, what would happen, and then it got shut down? We’re blessed (that) we’re where we’re at, and I think it’s going to be great.”

The District sits on the former residential Lahoma Courts residential site, one of the busiest intersections in Enid and Northwest Oklahoma.

Nearly a third of the corridor has been developed with concrete flooring; the other two-thirds is open, rolling fields of muddy soil and patches of grass blades. Snow has taken residence on the mounds over the last week.

Hideaway Pizza has begun construction on the northwest corner, though a Hideaway spokesperson did not respond to questions about how a search for a general manager was going.

Colton’s has been open since the summer, while Jiffy Trip’s 26th currently open store opened three weeks ago. The longtime family-owned convenience store chain, of which Williams is president, first opened in Cherokee.

Great Plains Bank also will build its new location in the area, having sold the building for $2.55 million and then donating $2.3 million back to the city. Construction development began last week.

The District’s surge in activity comes at a crossroads for retail business in Enid.

“The need for retail in Enid should be very obvious to everyone,” Powell said. “We have a serious lack of soft good retailers in town to provide clothing, shoes, household goods, for the people who live here.”

While boutiques mostly located downtown have worked to meet that desire, Powell said rent is too high in a space like The District to cover a national retailer’s investment — necessitating a city partnership like Apex’s incentive deal.

Both the on-hold 7.5 acres of the theater/trampoline park tract and the 1.8 acres south of Colton’s still are open for development, and Williams said his and his son Alex Williams’ company, Anchored Capital 3 Investments, planned to hold the latter property long-term for the city and sell if it’s needed.

“At the end of the day, we’ve got a parcel — a really nice parcel — that we need to bring something to Enid and would really benefit (the city),” he said.

The possible theater was why Williams said he made an agreement with the city of Enid in February 2019.

The city received $1.35 million for Lahoma Courts and $2.048 million in infrastructure improvements.

A previous deal with Hunt Development had fallen through in 2015, Enid City Manager Jerald Gilbert said, partly because the city was unable to fulfill its agreement to buy 23 Lahoma Courts properties, which would then be sold to Hunt by a one-year deadline.

By 2016, Gilbert said, the city had acquired 21 of the 48 residential properties not already owned by Nicholas Realty’s Westside Builders Inc., which then sold its 25 to the city for $2.1 million in 2019.

The deal with Colton’s was transferred to Anchored Capital 3, while the movie theater tract lot was transferred back to the city. Gilbert said Nicholas Realty and Rickey Hayes, the city’s retail consultant, worked to secure the Hideaway deal.

“It’s a great example of a success story when everyone’s working together,” Gilbert said. “It’s also a great example that development is hard stuff, and it takes time, but it’s surely worth the effort once people can see the results.”