Oklahoma continued to see record COVID-19 increases, topping 3,500 new cases in a single day for the third time this month, with 21 more deaths reported by the state Health Department.

There have been 1,624 Oklahomans who have died either due to COVID-19 or from complications of the virus, according to OSDH.

Deaths reported Saturday were 12 women and nine men, with 13 in the 65 and older, six in the 50-64 and two in the 36-49 age groups, according to OSDH. Counties of residence were six from Tulsa, three from Oklahoma, two each from Canadian and Rogers and one each from Cleveland, Comanche, Creek, Grady, Jackson, Muskogee, Pawnee and Pottawatomie. OSDH does not identify age and gender per county of residence on the weekends.

Northwest Oklahoma county case increases on Saturday also included 15 in Kingfisher, 14 in Noble, 11 in Blaine, nine in Major and seven each in Alfalfa, Woods and Woodward, according to OSDH.

Case gains in Northwest Oklahoma cities and towns included 61 in Enid, nine in Hennessey, eight in Fairview, seven each in Alva and Woodward, six each in Cashion and Helena, five in Kingfisher, four in Watonga, three in Canton, two in Mulhall and one each in Aline, Billings, Covington, Drummond, Kremlin, Nash, Okarche and Okeene. There was a reduction of one case in Pond Creek. 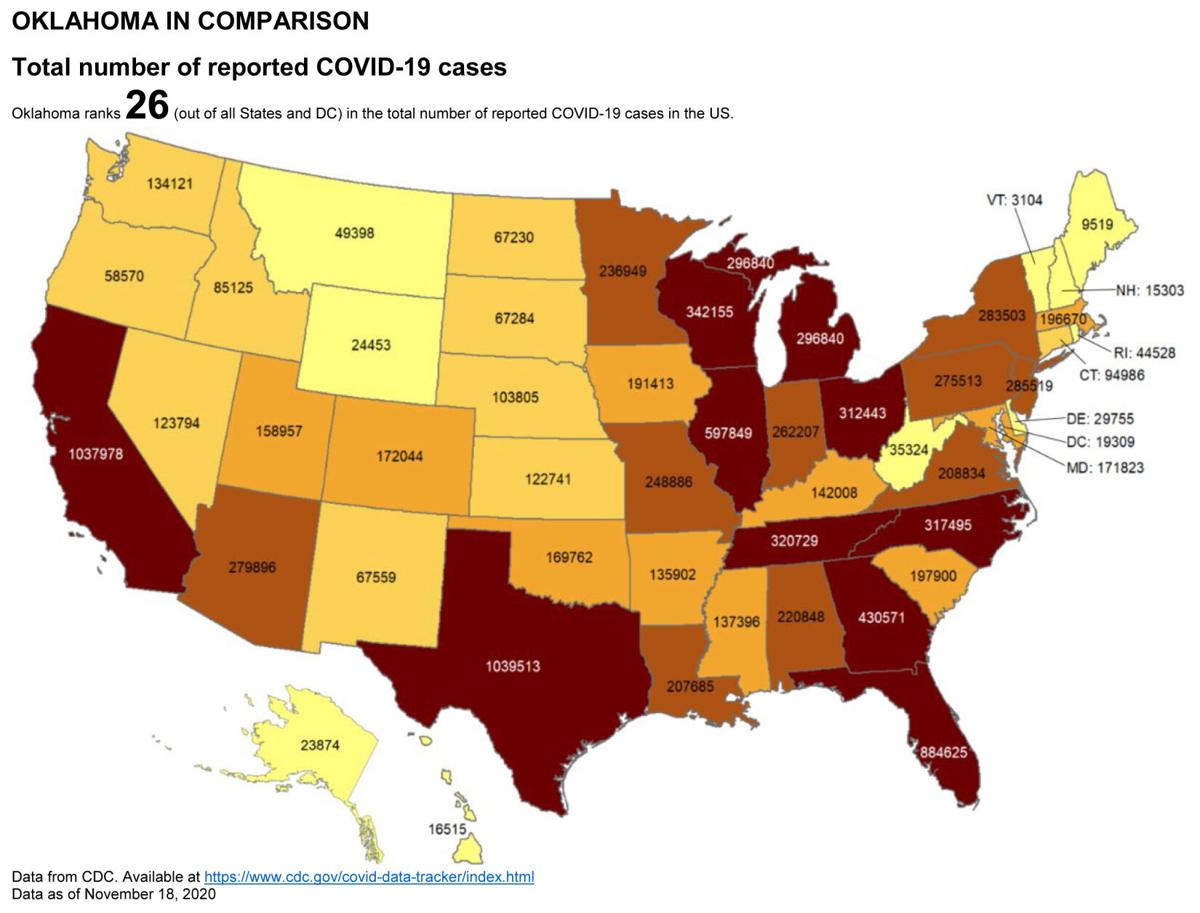 Oklahoma gained in the number of new and recovered cases and deaths, according to the OSDH weekly report. The 19,649 new cases reported Nov. 13-19 represented a 16.1% change over the prior week, when a 74.85% increase was recorded. The number of COVID-19 recoveries rose by 18.7% and deaths, at 107 this past week, increased by 20.2%, according to OSDH data. 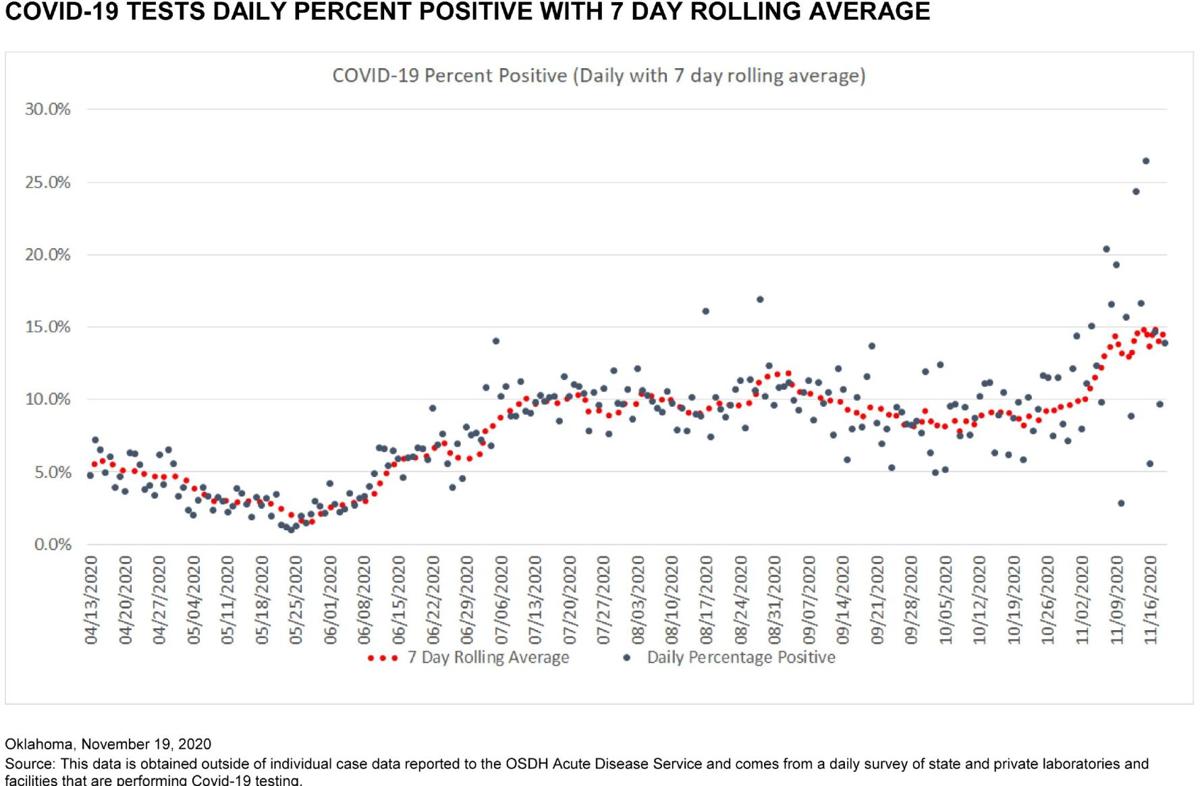 Since Nov. 1, the state has seen an increase of more than 37.7% in COVID-19 cases, with the OSDH’s seven-day rolling average showing a distinct climb since the first of the month.

Oklahoma currently ranks 26th in the number of total reported COVID-19 cases and 15th in the cumulative incidence (per 100,000 persons) in the nation.

There have been 89,429 Oklahoma women and 81,311 men who have tested positive for COVID-19, according to OSDH as of Saturday. There were 184 designated as unknown gender.

Data shows deaths in 71 of Oklahoma’s 77 counties, with 275 in Oklahoma County; 254 in Tulsa County; 119 in Cleveland County; 63 in Rogers County; 44 each in McCurtain and Washington counties; 43 in Creek County; 38 in Delaware County; 35 in Wagoner County; 33 in Garfield County; 30 in Muskogee County; 29 each in Caddo and Comanche counties; 27 in Canadian County; 26 each in Jackson and LeFlore counties; 25 in Lincoln County; 23 in Pottawatomie County; 22 each in Kay and Ottawa counties; 21 in Pittsburg County; 20 in Grady County; 18 each in Bryan and Osage counties; 17 each in Beckham, Mayes, Okmulgee and Payne counties; 16 in McClain County; 14 in Sequoyah County; 13 each in Adair, Carter, McIntosh, Okfuskee and Stephens counties; 11 each in Custer, Garvin and Texas counties; 10 each in Cherokee, Pontotoc and Seminole counties; eight in Greer County; seven in Hughes County; six each in Haskell, Kingfisher, Kiowa, Pawnee, Pushmataha and Woodward counties; five each in Roger Mills and Tillman counties; four each in Choctaw, Johnston, Murray, Noble and Nowata counties; three each in Cotton, Grant, Latimer, Logan and Marshall counties; two each in Beaver, Blaine, Craig, Harper, Jefferson, Major and Washita counties; and one each in Atoka, Dewey, Love and Woods counties.

• Kingfisher with 788 cases, 660 recovered, 112 active and six deaths, three from Okarche, two from Hennessey and one from Kingfisher;

• Grant with 187 cases, 150 recovered, 34 active and three deaths, one each from Deer Creek, Medford and Wakita.

OSDH has officially reported 33 deaths both in Enid and Garfield County, but there also was one death reported from Lahoma, which is near the county line for Major, where no deaths have been recently reported by the OSDH.

The discrepancy is being investigated by the Health Department, said Anthony Triana, a media relations supervisor with Saxum, a public relations firm hired by the state to assist OSDH. Triana said Friday “that OSDH is internally working through data, and it should be sorted out, but it most likely will not be published publicly or provided due to privacy concerns.” A follow-up question about how it would violate HIPPA laws was not immediately answered.

BREAKING NEWS on the COVID-19 threat and its impact is available at https://www.enidnews.com/virus and is free for all readers.

COVID-19 cases per county in Oklahoma as reported by the Oklahoma State Department of Health Saturday, Nov. 21, 2020. SOURCE: OSDH