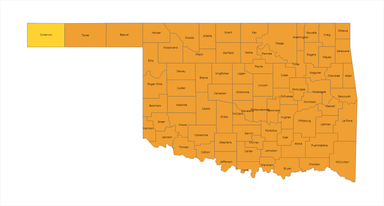 Of the 77 Oklahoma counties, 76 are in “orange” risk level for the COVID-19 Risk Level System and one, Cimarron, is in “yellow” as of Jan. 8, according to OSDH. Oklahoma reported 5,232 new COVID-19 cases and 31 additional deaths Friday. 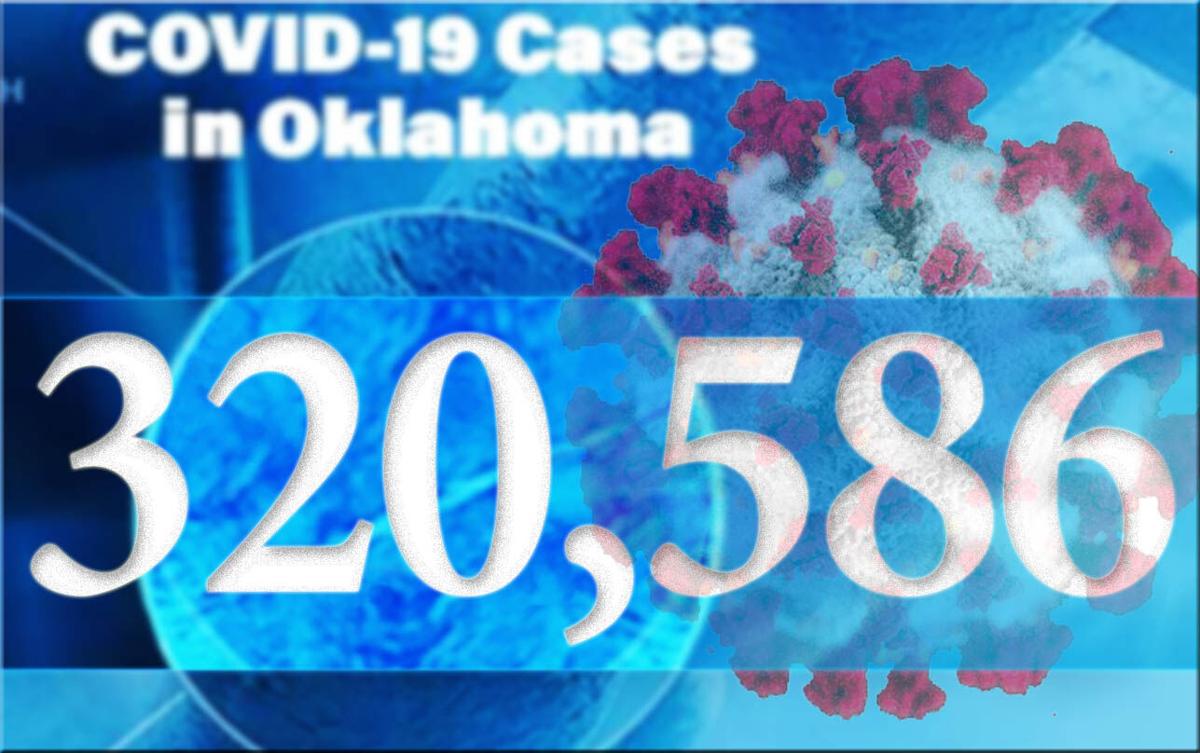 Of the 77 Oklahoma counties, 76 are in “orange” risk level for the COVID-19 Risk Level System and one, Cimarron, is in “yellow” as of Jan. 8, according to OSDH. Oklahoma reported 5,232 new COVID-19 cases and 31 additional deaths Friday.

Oklahoma reported 5,232 new COVID-19 cases, the highest single-day increase in the state, and 31 virus-related deaths on Friday, according to Oklahoma State Department of Health.

Of the 77 Oklahoma counties, 76 are in the moderate, or “orange,” and one, Cimarron County in the Panhandle, is in the low, or “yellow,” risk level, according to the OSDH’s COVID-19 Risk Level System released weekly.

Not only was Friday’s new case total the highest single-day case increase since the pandemic began, it’s the third time since Jan. 1 that Oklahoma has seen more than 5,000 cases in a single day.

Maggie Jackson, regional director of community engagement and planning for Oklahoma State Department of Health, said Oklahoma is seeing a spike in cases two weeks after Christmas, though the trend isn’t showing up in Garfield County.

“I think, you know if you watch the trend ... Our county, I’m not really seeing the spike yet, but you can see on the Oklahoma trend line that we are kicking up,” Jackson said. “We had that spike after Thanksgiving, and now there’s an uptick again, so it does look like we will see that increase in new cases from Christmas. I just can’t really see that in the Garfield trend yet.”

Statewide, there have been 2,703 deaths in Oklahoma in which the virus was the cause or a contributing factor, the OSDH reported.

Cumulative COVID-19-positive hospitalizations in Oklahoma stood at 18,418, according to OSDH. Of those, 1,926 were hospitalized Friday, with 467 in ICU, according to Friday’s OSDH Executive report.

Other Northwest Oklahoma county case increases included six in Woodward, 37 in Kingfisher, nine in Noble, seven in Woods, 10 in Alfalfa, eight Major, 19 in Blaine and four in Grant.

There have been 46 deaths in Garfield County, with 43 from Enid and four from Lahoma, according to OSDH. The discrepancy between county and city totals pre-dates the Lahoma deaths and most likely falls in the Enid count, as more widely shared county numbers are accurate, according to OSDH public relations firm Saxum.

There have been 169,469 Oklahoma women and 150,940 men who have tested positive for COVID-19, according to OSDH on Friday. There were 177 designated as unknown gender.

Data shows deaths in 76 of Oklahoma’s 77 counties, with 457 in Oklahoma; 444 in Tulsa; 170 in Cleveland; 87 in Rogers; 74 in Comanche; 71 in Creek; 65 in Washington; 56 each in McCurtain and Muskogee; 54 in Canadian; 49 in Wagoner; 46 in Garfield; 45 in Delaware; 44 in Kay; 41 in Caddo; 39 each in Bryan, Grady and Pottawotomie; 38 each in Jackson and Custer; 34 in Lincoln; 33 each in Le Flore and Payne; 30 each in McClain, Okmulgee, Osage and Ottawa; 27 in Mayes; 26 each in Pontotoc and Stephens; 25 in Pittsburg; 22 in Beckham; 21 in Seminole; 20 each in Cherokee, Garvin and Sequoyah; 19 in Carter; 18 each in McIntosh and Texas; 15 each in Okfuskee and Pawnee; 14 each in Adair and Logan; 12 each in Kingfisher and Kiowa; 11 each in Cotton and Murray; 10 each in Hughes, Johnston, Nowata and Woodward; nine each in Greer and Tillman; seven each in Choctaw, Craig, Haskell, Latimer, Love and Noble; six each in Marshall, Pushmataha and Roger Mills; five each in Coal, Grant and Woods; four each in Alfalfa, Blaine, Jefferson and Major; three each in Atoka, Dewey, Harper and Washita; two in Beaver; and one each in Cimarron and Ellis.

• Kingfisher with 1,533 cases, 1,399 recovered, 122 active and 12 deaths, four from Okarche, three each from Hennessey and Kingfisher and two from Dover.

• Alfalfa with 977 cases, 907 recovered, 66 active and four deaths, one each from Aline, Cherokee and Helena and an inmate from James Crabtree Correctional Center, in Helena.

• Major with 753 cases, 693 recovered, 56 active and four deaths, two from Fairview and two not listed by town.

• Blaine with 726 cases, 640 recovered, 83 active and three deaths, two from Canton, one from Watonga and one not listed by town.

• Grant with 416 cases, 373 recovered, 38 active and five deaths, two from Wakita and one each from Deer Creek, Lamont and Medford.

The number of inmates currently positive for COVID-19 was at 59 Friday, with 114 Department of Corrections employees with the virus across the state, according to the DOC website.

Inmates in isolation and quarantine included 10 and 201, respectively, at James Crabtree and one and five at Enid Community, and there were two in quarantine at William S. Key, according to the DOC website.BREAKING NEWS on the COVID-19 threat and its impact is available at https://www.enidnews.com/virus and is free for all readers. That includes information on closings and cancellations.

COVID-19 cases per city in Oklahoma as reported by the Oklahoma State Department of Health Friday, Jan. 8, 2021. SOURCE: OSDH

COVID-19 cases per county in Oklahoma as reported by the Oklahoma State Department of Health Friday, Jan. 8, 2021. SOURCE: OSDH

ENID - A private family graveside for Bonnie Williams will be at 1:00 p.m. today at the Fairview Cemetery under the direction of Ladusau-Evans Funeral Home. Family has requested everyone wear a mask and socially distance.

ALVA - Graveside services for Robert Eugene "Shorty" Koehn, are 10:00 a.m. Saturday, January 23, 2021, at the West New Hopedale Cemetery north of Ringwood. Interment is under the direction of Marshall Funeral Home of Alva.