ENID, Okla. — Two Enid residents were among the 264 weekly COVID-19-related deaths reported by Oklahoma State Department of Health on Wednesday.

The weekly increase brought the total number of deaths in Garfield County to 153. Of those, 142 have been in Enid, according to OSDH city data, with five in Lahoma, one each in Drummond, Fairmont, Garber, Covington and Waukomis and one not listed by town. Deaths listed by ZIP code on the OSDH website show Enid with 140 deaths.

Four other deaths were reported from Alva, Geary, Perry and Watonga.

The Health Department’s weekly numbers — which OSDH acute disease service reports to the CDC — on Wednesday showed Oklahoma has 9,213 confirmed deaths. The CDC/NCHS’ Provisional Death Count — which is based on death certificates and is OSDH’s primary reported number — places the overall count in Oklahoma at 10,533 deaths, a weekly increase of 325, in which the coronavirus was the cause or a contributor.

OSDH showed 620,834 total cases from CDC provisional state data, including 1,096 from Wednesday, and 619,056 total cases, a weekly increase of 9,319, with OSDH’s disease investigation summary. Of the latter number, there were 12,988 active, a decrease of 3,322 in the past week. OSDH no longer reports recovered cases.

Other Northwest Oklahoma county case increases in the past week included 33 in Woodward, 25 in Major, 22 in Blaine, 18 in Kingfisher, 15 in Woods, 14 in Noble, eight in Alfalfa and two in Grant.

OSDH reported, as of Tuesday, there were 13 ICU beds, or 43.3% of the total, and 197 adult inpatient beds, or 50.5% of the total, available in the Northwest Region, which consists of 18 counties including Garfield County. Health care workers have continued to emphasize that bed counts are fluid, constantly changing with patient conditions and hospital efforts to maximize space and treatments.

COVID-19-positive cases among both students and staff at Enid Public Schools have decreased since last week, according to the district’s case count regularly updated online.

Among the elementary schools, Prairie View had the most student-positive cases at seven, followed by four at Coolidge, two at Eisenhower and one each at Hoover, McKinley and Monroe. Five staff members from Coolidge are in isolation.

In total, there are 36 COVID-19-positive cases among students, and 14 staff members from several EPS sites are in isolation, as well. Three staff in the district’s IT department are currently out, as is one staff member in the transportation department.

Chisholm Middle School reported one positive case. Chisholm Public Schools reports whenever a new case has been identified, but no other public schools in the immediate Enid area report current or active positive case totals.

Autry Technology Center reported one more positive case in the past week on its main campus.

Three Northern Oklahoma College Enid students have tested positive for COVID-19 and are in isolation, with two more quarantining for possible exposure, according to NOC’s weekly update from Friday.

Of NOC’s 312 total cases, 276 individuals have been physically present on campus.

Northwestern Oklahoma State University reported nine total active student cases and two staff member as of last Friday on all of its campuses, but the college does not report on which of its Alva, Enid or Woodward campuses. 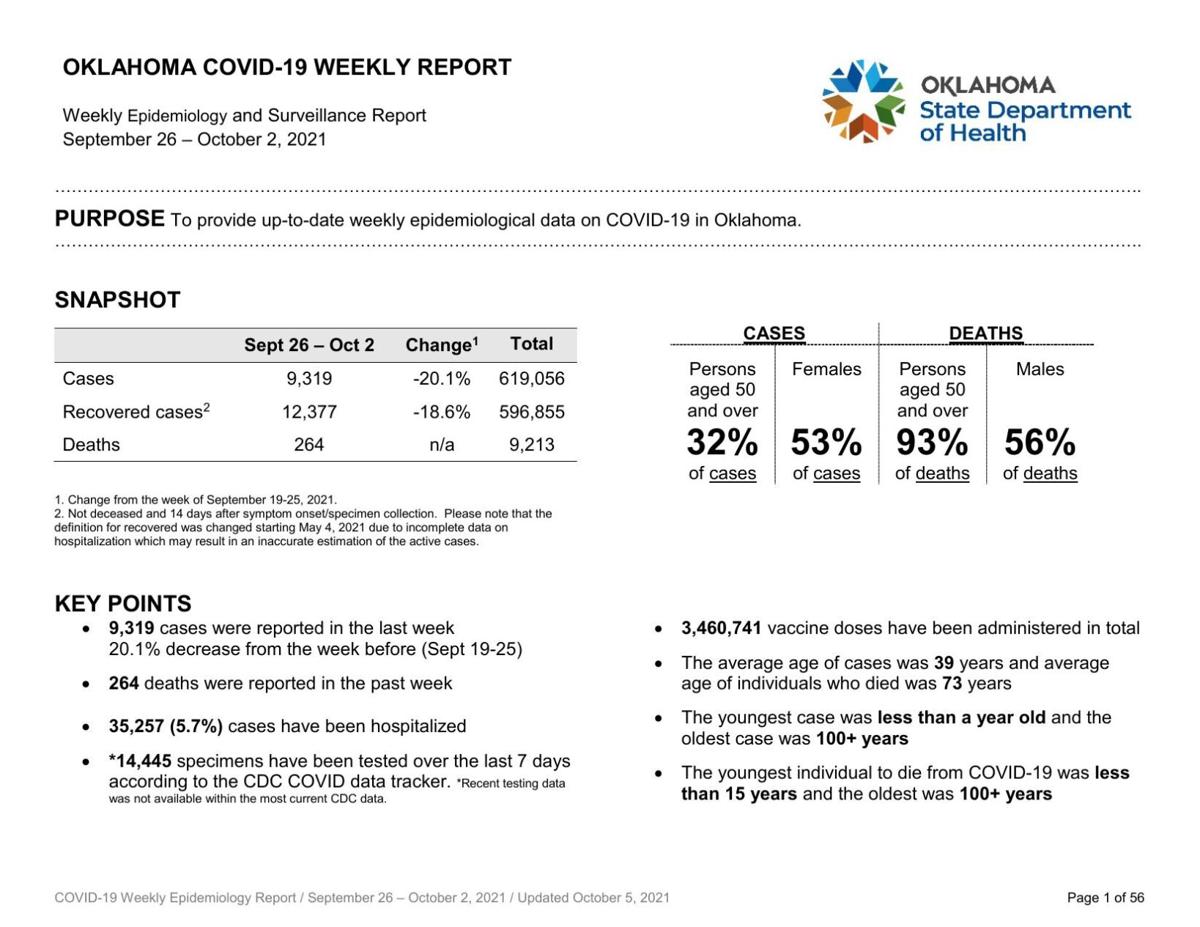 Oklahoma also saw a 20.1% decrease in the number of reported cases statewide compared with the previous week, according to OSDH’s weekly epidemiology report from the week of Sept. 26 through Oct. 2.

Overall in Oklahoma, 57% of residents have had at least one dose, compared with 56.3% last week. The number of fully vaccinated residents statewide is 48.1%, compared to 47.4% last week.

• Kingfisher with 2,525 cases, 2,447 recovered, 34 active and 44 deaths, 21 from Kingfisher, 13 from Hennessey, five from Okarche — which Kingfisher shares with Canadian County — two from Dover and three not listed by town.

• Alfalfa with 1,272 cases, 1,254 recovered, 11 active and seven deaths, with city data listing three from Carmen, two each from Aline and Helena and one each from Cherokee and Jet. City data encompasses rural towns that could include those residing in neighboring counties, which could cause the discrepancy.

• Grant with 686 cases, 674 recovered, five active and seven deaths, three from Wakita and one each from Deer Creek, Lamont, Medford and Nash.

COVID-19 cases per county in Oklahoma as reported by the Oklahoma State Department of Health Wednesday, Oct. 6, 2021. SOURCE: OSDH