ENID, Okla. — Oklahoma gained 3,538 new COVID-19 cases Friday and 43 additional deaths, including two Enid women and one Garber woman, as well as a man and woman from Kingfisher County. 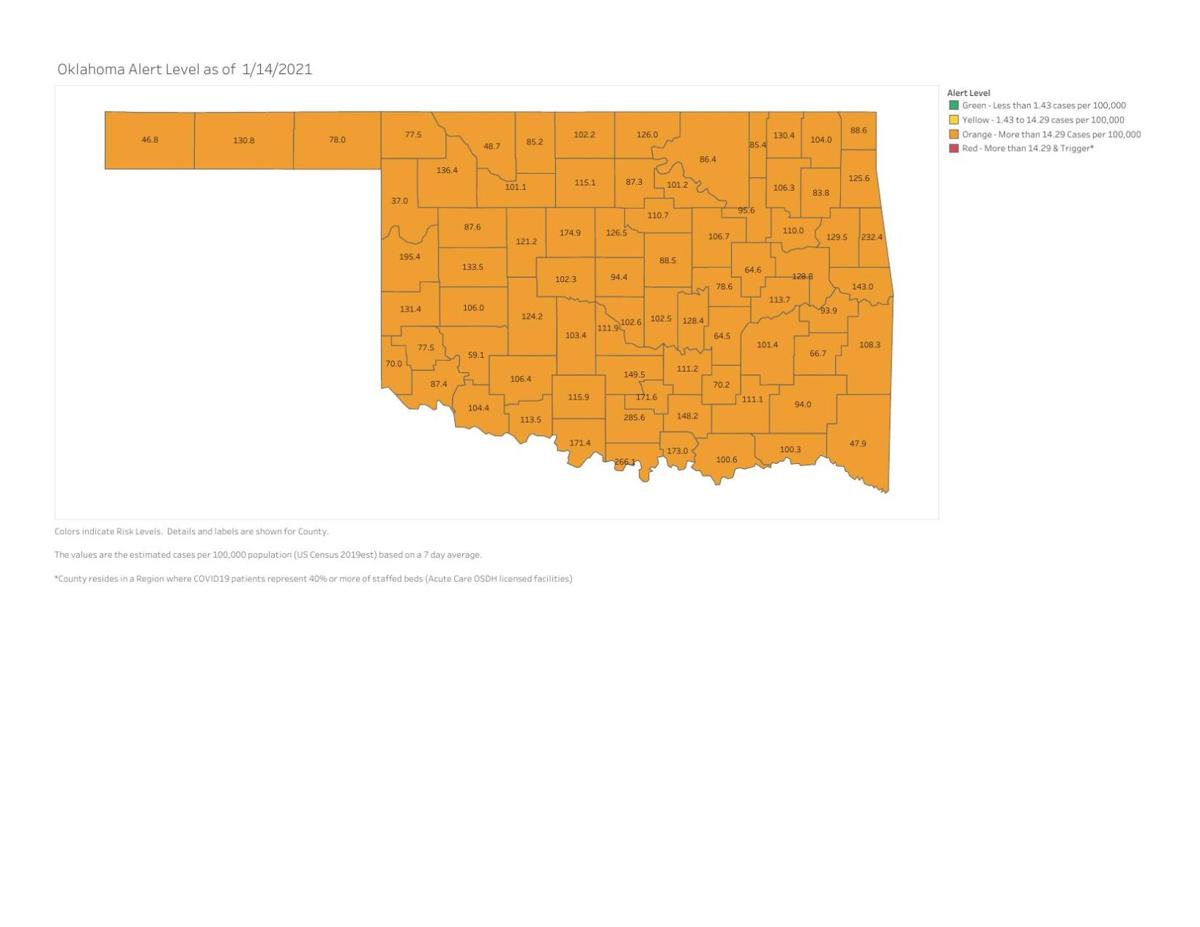 All 77 Oklahoma counties are in the moderate, or “orange,” risk level for the COVID-19 Risk Level System, which OSDH releases every Friday. Last week, Cimarron County was in the low, or “yellow,” risk level.

Statewide, there have been 2,925 deaths in Oklahoma in which the virus was the cause or a contributing factor, OSDH reported. All 77 counties now have at least one death, as the last, Harmon County, reported one death Friday.

Of the 43 deaths reported Wednesday, 35 were in the 65 and older age group: two women in Cleveland County; three women in Garfield County; four men in Oklahoma County; two women and four men in Tulsa County; one man each from Beckham, Choctaw, Cleveland, Comanche, Dewey, Grady, Harmon, Kingfisher, Murray, Nowata and Stephens counties; and one woman each from Cherokee, Garvin, Kay, Kingfisher, Oklahoma, Okmulgee, Sequoyah and Wagoner counties. OSDH also included a Texas County death on its email but not on its website.

Six deaths were in the 50-64 age group: one man each from Cleveland, Kay and Payne counties, one woman in Creek county and two women in Oklahoma County. Two Oklahoma County men were in the 36-49 age group, and one Tulsa County woman was in the 18-35 age group.

There have been 50 deaths in Garfield County, with 46 from Enid, one from Garber and four from Lahoma, according to OSDH. The discrepancy between county and city totals pre-dates the Lahoma deaths and most likely falls in the Enid count, as more widely shared county numbers are accurate, according to OSDH public relations firm Saxum.

Other Northwest Oklahoma county case increases included 17 in Woodward, 12 in Kingfisher, six in Noble, five in Woods, two in Alfalfa, seven in Major and four in Blaine and three in Grant.

There have been 184,221 Oklahoma women and 163,753 men who have tested positive for COVID-19, according to OSDH on Friday. There were 70 designated as unknown gender.

• Kingfisher with 1,701 cases, 1,541 recovered, 145 active and 15 deaths, five from Hennessey, four each from Kingfisher and Okarche and two from Dover.

• Alfalfa with 1,003 cases, 956 recovered, 42 active and five deaths, two each from Aline and Helena, including a James Crabtree Correctional Center inmate, and one from Cherokee.

• Major with 806 cases, 734 recovered, 68 active and four deaths, two from Fairview and two not listed by town.

• Blaine with 791 cases, 694 recovered, 93 active and four deaths, two from Canton, one from Watonga and one not listed by town.

• Grant with 446 cases, 413 recovered, 28 active and five deaths, two from Wakita and one each from Deer Creek, Lamont and Medford.

The number of inmates currently positive for COVID-19 was at 69 Friday, with 110 Department of Corrections employees with the virus across the state, according to the DOC website.

Inmates in isolation and quarantine included 32 and 195, respectively, at James Crabtree, and five in quarantine at Enid Community, according to the DOC website.

COVID-19 cases per county in Oklahoma as reported by the Oklahoma State Department of Health Friday, Jan. 15, 2021. SOURCE: OSDH