ENID, Okla. — Four Enid residents and one Drummond resident, along with residents from Blaine, Major, Noble and Woodward counties, were nine of the 103 deaths reported in the past week by Oklahoma State Department of Health on Wednesday.

The CDC/NCHS’ Provisional Death Count, based on death certificates, placed the overall count in Oklahoma at 7,873 deaths in which the coronavirus was the cause or a contributor, an increase of 27 since Tuesday.

The Provisional Death Count is OSDH’s primary reported number. OSDH released its weekly numbers — which OSDH acute disease service reports to the CDC — on Wednesday. The ADS shows Oklahoma has 4,953 confirmed deaths, an increase of 103 since last week.

According to OSDH Situation Update, the state gained 390 new COVID-19 cases Wednesday, bringing the total to 436,135.

Of the total cumulative hospitalizations in the state, 197 are currently hospitalized, with 56 in ICU, according to OSDH’s Executive Report released Wednesday afternoon.

In Enid, St. Mary’s Regional Medical Center reported it had one COVID-19 patient and no new deaths. Integris Bass Baptist Health Center reported Wednesday it had three patients and also no deaths.

Of the county’s 89 deaths, 80 have been in Enid, according to OSDH city data, with five in Lahoma and one each in Drummond, Fairmont, Garber and Covington. Deaths listed by ZIP code on the OSDH website has Enid with 79 deaths.

Weekly increases in other Northwest Oklahoma counties included 10 in Woodward, five in Kingfisher, four in Alfalfa, three in Blaine and one each in Grant, Noble and Woods. No cases were reported in Major County. 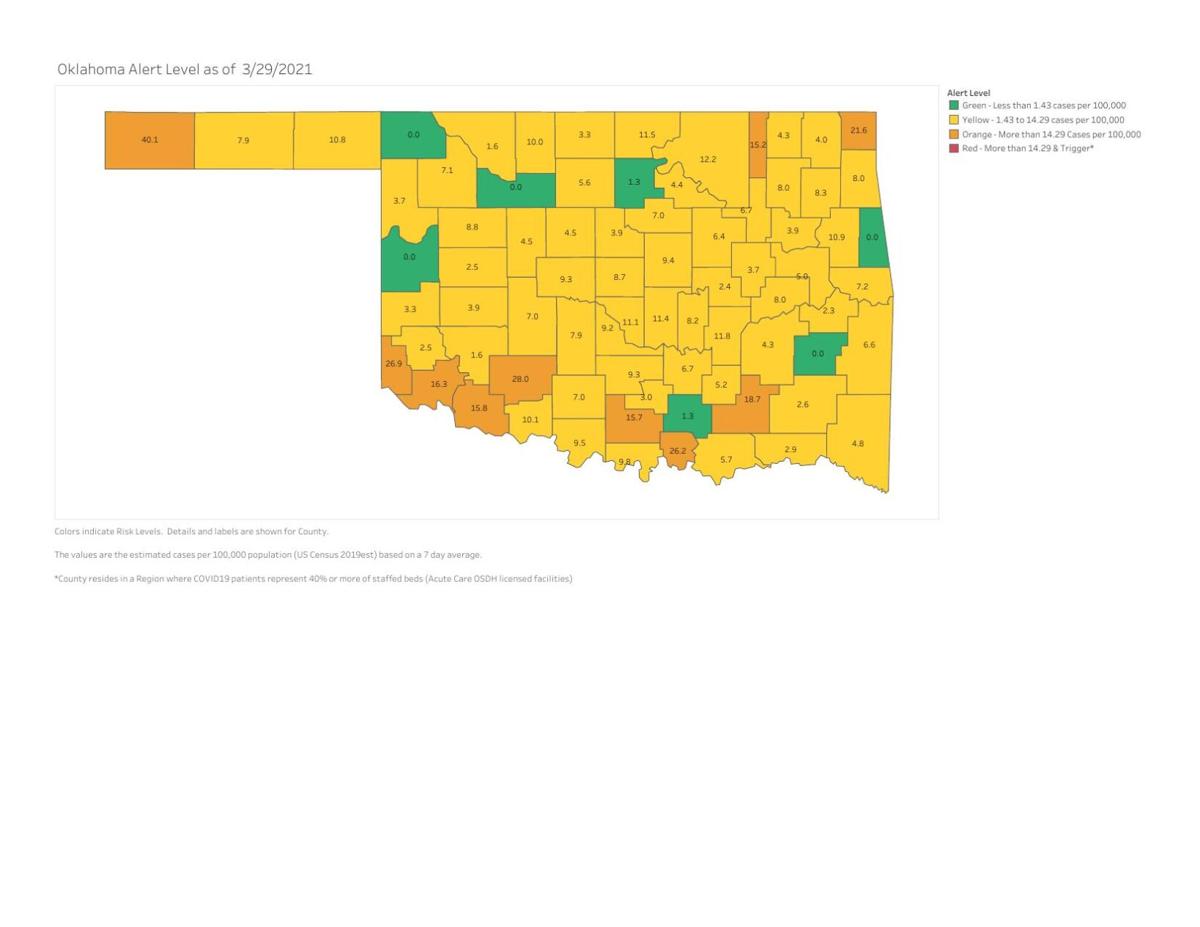 Last week, there were 12 counties in the moderate risk level, 59 in the low risk level and six in the new normal risk level. 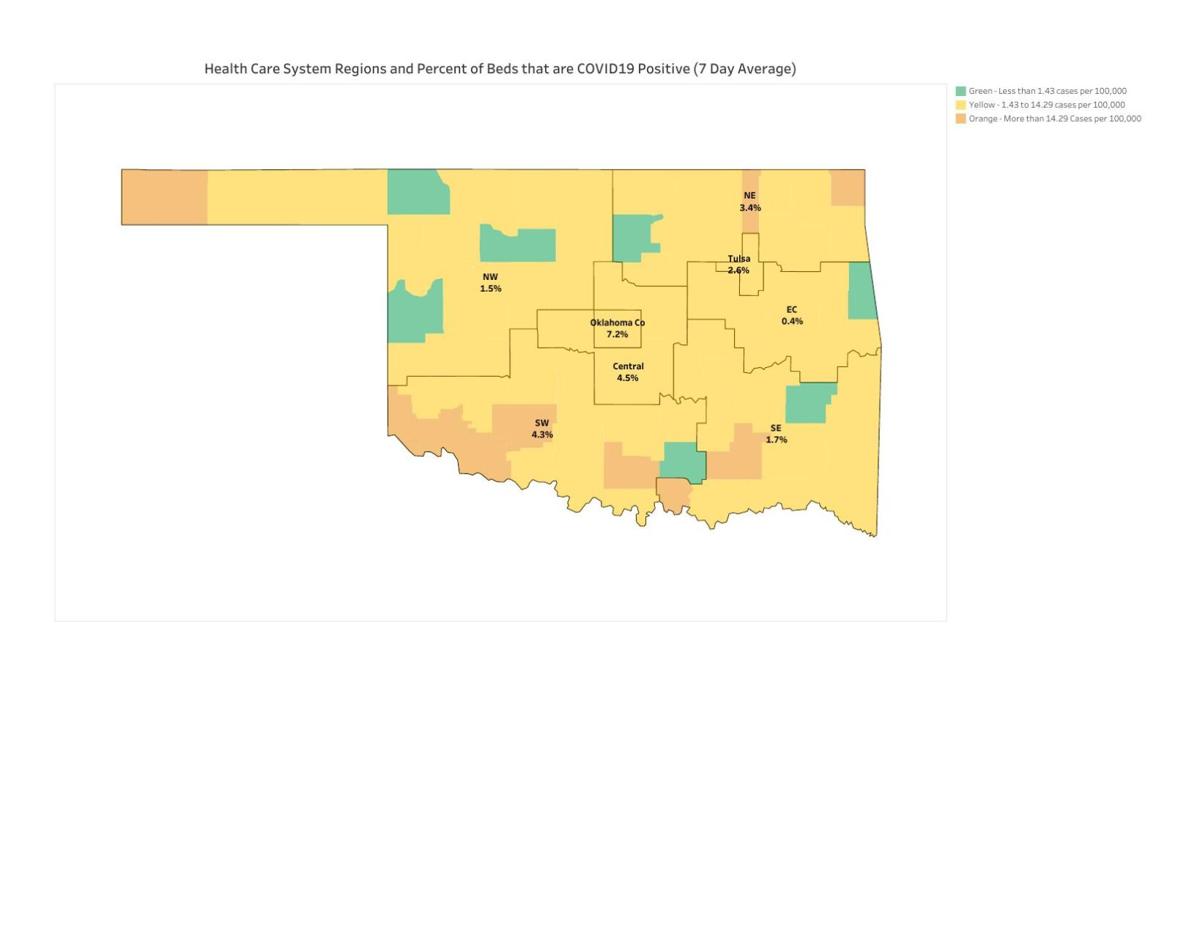 Only one county, Cimarron, in the health care system Northwest Region, is in “orange,” and 1.5% of beds in the region are COVID-19-positive.

Garfield County, along with Alfalfa, Blaine, Grant, Kingfisher, Woods and Woodward, are all in “yellow” this week as they were last week, according to OSDH. 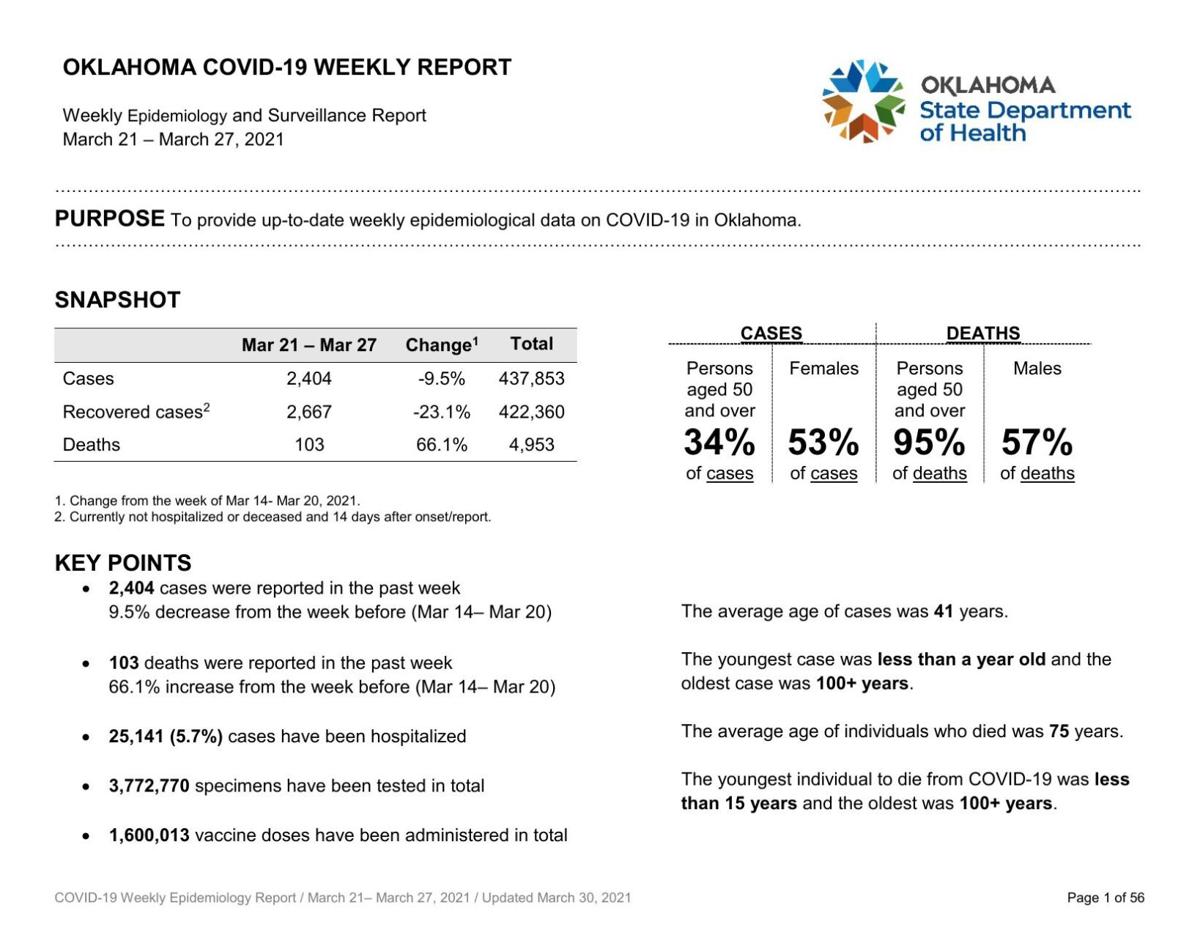 According to OSDH’s Weekly Epidemiology Report, which is released every Wednesday, COVID-19 cases saw a decrease in the past week, but deaths saw an increase.

OSDH reported 34% of the cases were people aged 50 and older, and 95% of the deaths were in that same age group.

COVID-19 patient hospitalizations were at 5.7% statewide in a week-to-week comparison, the same as the previous week. Since the first case was confirmed in Oklahoma in March 2020, the number of admissions to state hospitals was at 25,141, according to the report. Confirmed cases of COVID-19 hospitalizations from March 21-27 were at 215, down 25 from the week before, according to OSDH.

The number of positive cases makes up 10.5% of nearly 3,772,770 specimens tested in the state, according to OSDH. The death rate for those positive cases remains at 1.1%.

• Noble with 1,370 cases, 1,309 recovered, 45 active and 16 deaths, including nine from Perry, two each from Billings and Red Rock and one each from Marland and Morrison.

• Alfalfa with 1,155 cases, 1,138 recovered, 12 active and five deaths, with city data listing two each from Aline, Carmen and Helena and one from Cherokee. City data encompasses rural towns that could include those residing in neighboring counties, which could cause the discrepancy.

• Major with 949 cases, 917 recovered, 19 active and 13 deaths, eight from Fairview, two from Cleo Springs, one from Ringwood and two not listed by town.

• Grant with 548 cases, 534 recovered, seven active and seven deaths, three from Wakita and one each from Deer Creek, Lamont, Medford and Nash.

COVID-19 cases per city in Oklahoma as reported by the Oklahoma State Department of Health Wednesday, March 31, 2021. SOURCE: OSDH

COVID-19 cases per county in Oklahoma as reported by the Oklahoma State Department of Health Wednesday, March 31, 2021. SOURCE: OSDH

ALEXANDRIA — A Memorial Service for Thelma Lois Webster, 91, will be held at 1:30 p.m. on Wednesday, June 16, 2021, in the Stittsworth Memory Chapel. Remembrances may be shared online at www.stittsworthfuneralservices.com.

The Service celebrating and honoring the life of Thomas "Tommy" Crawford, 74, of Enid are pending under the direction of Brown-Cummings Funeral Home. Condolences and special memories may be made to the family online at WWW.Brown-Cummings.Com

ENID — Celebration of life service for Richard Leroy Wood will be 10:00 a.m. Wednesday at Anderson-Burris Funeral Home Chapel. Burial will follow in Memorial Park Cemetery. Richard was born 5/28/1932 and passed away on 6/12/2021. www.andersonburris.com