PAWHUSKA, Okla. — A landowner in Osage County is alleging the city of Enid is illegally attempting to build its water pipeline across several counties to sell the water to Koch Fertilizer and other third parties, under the “guise of public necessity.”

Attorneys for Dr. James Merrifield also claim the city does not have proper jurisdiction to build the pipeline across their client’s property, which they allege is located on land owned by the Osage Nation of Oklahoma, under the recent U.S. Supreme Court ruling of McGirt v. Oklahoma.

Merrifield, an orthodontics practitioner in Ponca City, owns nearly 200 acres southwest of Kaw Lake, from which the city’s long-planned pipeline will transport water across 70 miles to a treatment plant in Enid, then disperse the treated water to city residents.

He and his attorneys allege building a pipeline from three counties away wouldn’t benefit him or other residents of the Northern Oklahoma county, and that the city does not have constitutional right to acquire property from four counties away.

“While the city of Enid has a constitutional right to condemn property, like most other constitutional rights, there are limitations,” a filing from September 2020 stated. “Otherwise, every sparsely populated municipality could traverse the entire state with a multitude of pipelines, thereby creating a myriad of confusion, along with spaghetti-like overlapping and/or duplicative easements.” 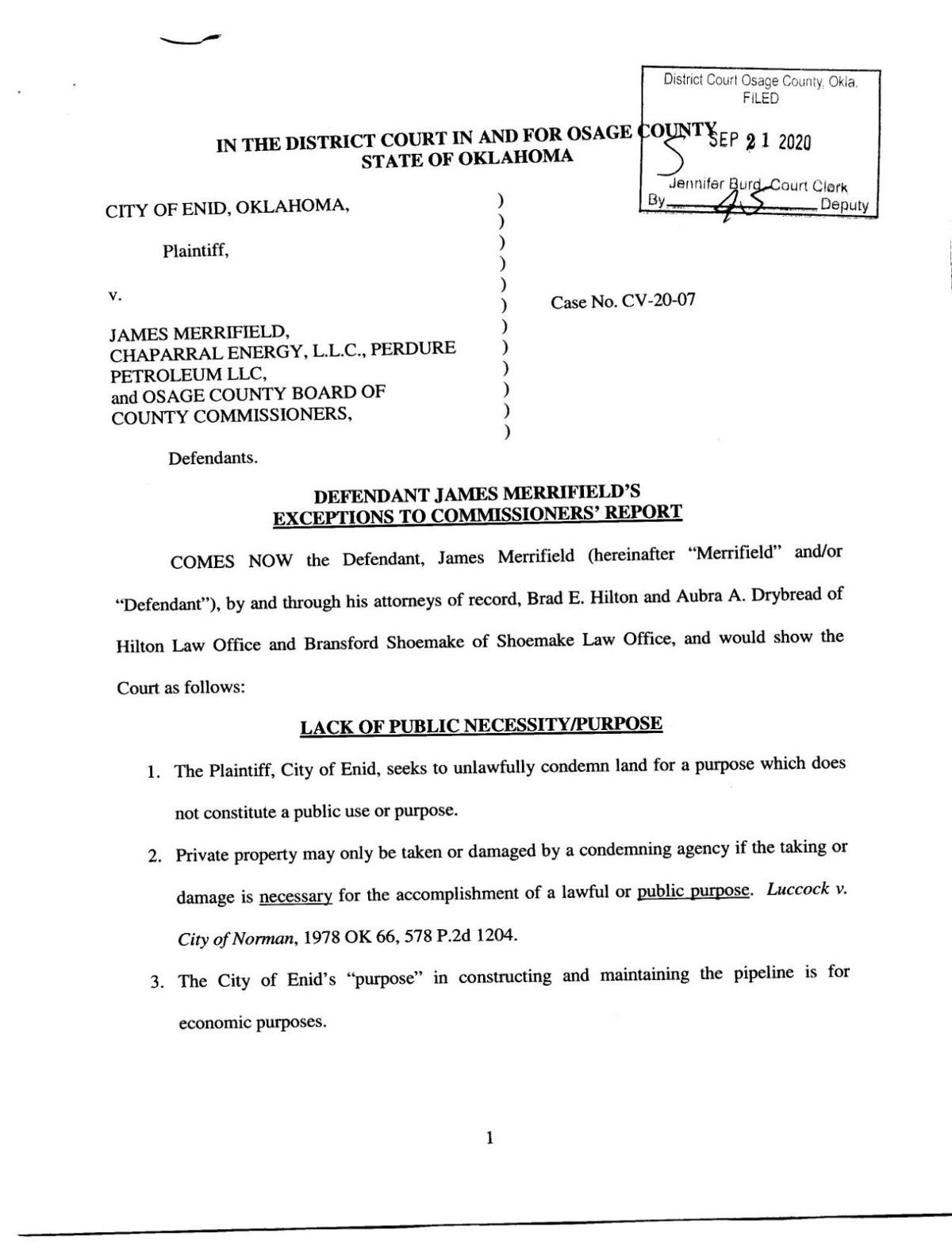 Part of a years-long eminent domain court dispute that began in January 2020, Merrifield made these exceptions in mid-September 2020 to a report from court-appointed commissioners, who determined a just compensation amount for the city of Enid to pay to acquire his property for the pipeline construction.

City attorneys countered these claims, arguing that while the city’s water supply is currently adequate, studies have shown they would need to seek another supply for future needs, which is permitted under state eminent domain statute.

Tulsa-based attorney Danny Williams also states that while the city of Enid has not entered into any agreement to sell water from the project to a municipality, statute-defined defenses against eminent domain do not include selling water to other municipalities, persons or corporations.

Williams also argued the lack of jurisdiction is without merit, stating that the federal condemnation process requires land to be owned by allotted tribal members or that land is owned by the tribal nation.

As required by state statute for condemnation hearings, commissioners had awarded $47,700 in just compensation to Merrifield for the city to acquire the perpetual 50-foot utility easement, as well as a 50-foot temporary construction easement, on the property.

By next summer, the city of Enid could go to a jury trial to settle an eminent domain dispute, officials said, rather than pay a Garfield County landowner $2.755 million recently awarded as just compensation for his property.

Merrifield’s exceptions to this award amount will be presented during a hearing this Thursday in Osage County, following two previous condemnation-related hearings conducted earlier this year. The hearing is set for 11 a.m. in Osage County District Court in Pawhuska.

Merrifield’s attorneys had applied for a continuance, requesting to add a second day to the hearing, but that was denied, under that the court had set sufficient time for the hearing.

City workers are prohibited from entering Merrifield’s property to begin construction on the pipeline until his exceptions are heard in court, after he successfully motioned for a restraining order against the city in July 2020.

Over the last two years, the city of Enid and Merrifield have been locked in a legal deadlock — during which several related cases have gone to the state level — over acquiring easements on his three lots in eastern Osage County.

In June 2019, Merrifield had requested an initial injunction prohibiting city workers from entering the property to survey the land for environmental impact studies.

Even earlier, following two public forums in April 2017, according to the city, he had submitted a comment that any person going onto his land would be considered trespassing, and their actions would be “physically prevented.”

He then sent a letter to the city, received May 4, 2017, in which he argued numerous reasons — unlike the ones in his September 2020 exceptions — for refusing to allow the pipeline to cross his land.

Merrifield said that a pipeline would prevent building eventual homes on his land, while another easement to the south would cause severe property value loss. 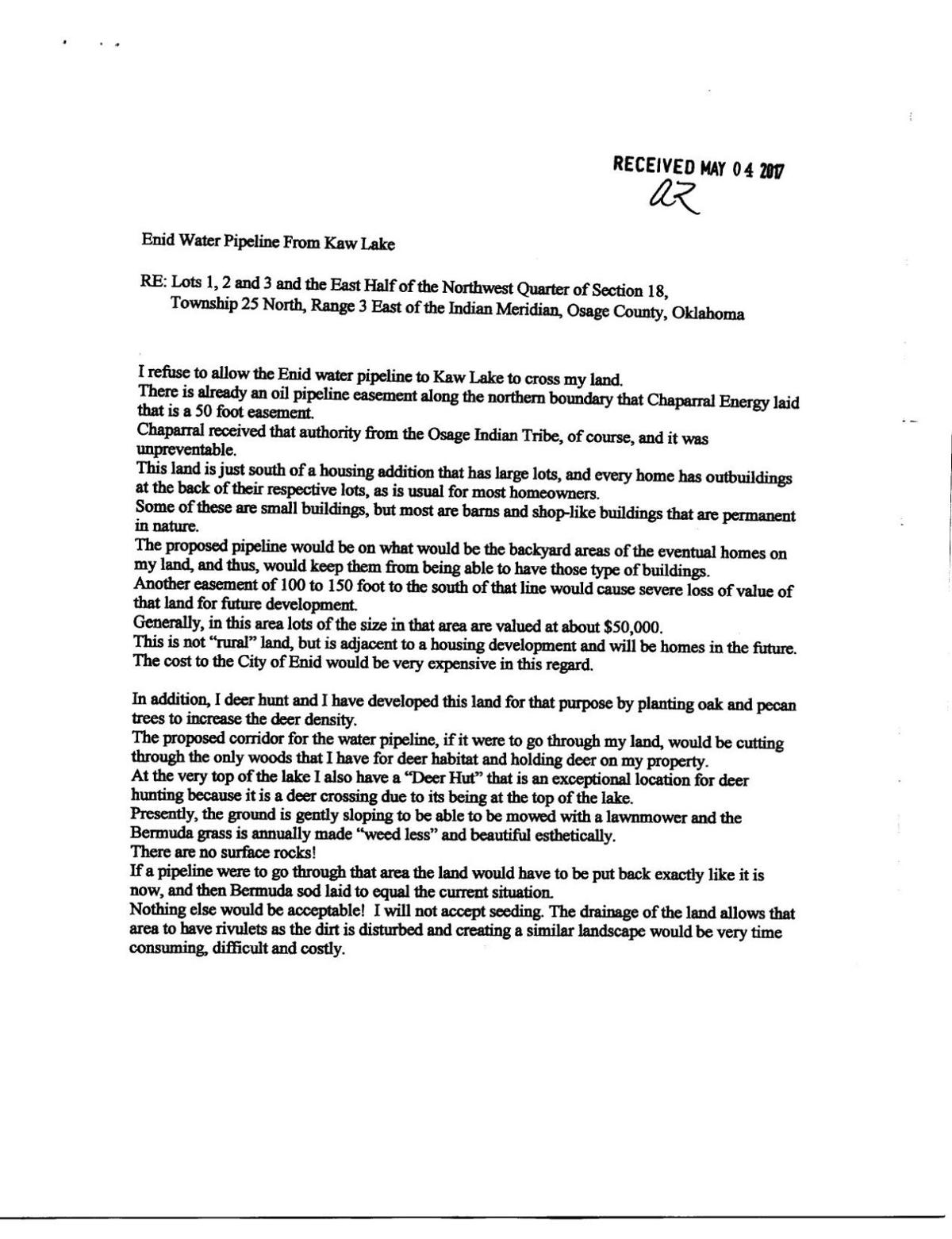 Another concern was the possible infestation of zebra mussels from Kaw Lake, attached to the water pump intakes and the pipe and valves used to lower lake level.

He also said he hunts deer and had developed the land to plant pecan and oak trees to increase deer density. A pipeline would prevent that woods habitat, he said.

“If the pipeline were to cross the northern edge of my land, the clearing for the easement would destroy my only deer habitat east of the northernmost portion of Merrifield Lake,” his letter stated.

Attorneys for the city filed their Osage County court petition to condemn Merrifield’s property one month after the latter had filed a declaratory judgment asking the district court to rule that the city couldn’t condemn his property.

Merrifield had filed an initial judgment petition, his attorneys said, because condemnation procedures do not allow for “broader” challenges to eminent domain laws. Only three pleadings are allowed under statute in condemnation proceedings: petition, demand for jury trial and exception to commissioners’ report.

However, the city said in its motion to dismiss the judgment petition that the plaintiff was for the second time attempting to thwart Oklahoma’s condemnation procedures by filing a separate lawsuit, outside of the condemnation proceedings.

A district judge sided with the city over the “moot” petition, and Merrifield unsuccessfully appealed that ruling to the Oklahoma Court of Civil Appeals. An appeal of that ruling has since been petitioned for writ of certiorari.

This year, Merrifield also has attempted to have the judge of the condemnation hearing be reassigned, which was denied in district court by both the judge, Stuart Tate, and another, Linda Thomas. His attorneys then filed a petition for a writ of mandamus with the Oklahoma State Supreme Court, which, too, was denied in September.

Merrifield alleged that Tate had an economic interest in property that would be “negatively affected” if courts determine Osage County is within “Indian Country.”

The city of Enid, he and his attorneys claimed, also was unlawfully disturbing and utilizing the Osage Nation’s mineral ownership.

However, last May, following both Merrifield’s and the city’s responses to the commissioners’ report, the city of Enid and the Nation entered into an agreement over the Kaw Lake pipeline, after four years of negotiations.

In return for sovereign immunity, the city is providing the Osage Nation a one-time payment of $1 million, as well as guaranteed right to use about a third of the pipeline’s total capacity, according to the Nation. The city also will provide an annual operations report to the Nation each March after construction is complete.

This came nearly a year after the July 2020 McGirt decision, in which the U.S. Supreme Court ruled that prosecution of crimes by Native Americans on lands in Eastern Oklahoma fall under tribal court jurisdiction and federal judiciary — rather than state courts.

The legal team representing an Osage County landowner in a years-long condemnation dispute argued in district court last week that the city of Enid’s long-standing financial relationship with Koch’s fertilizer plant is the major driving factor behind building the pipeline from Kaw Lake, rather than projected service-area growths for water demand or population.