ENID, Okla. — Seventy-five more COVID-19 cases were reported over the past week in Garfield County as many of Oklahoma’s counties, including Garfield, have turned “orange,” Oklahoma State Department of Health reported on Wednesday.

Of the county’s 139 deaths, 128 have been in Enid, according to OSDH city data, with five in Lahoma, one each in Drummond, Fairmont, Garber, Covington and Waukomis, and one not listed by town. Deaths listed by ZIP code on the OSDH website show Enid with 126 deaths.

Other Northwest Oklahoma county case increases in the past week were 25 in Noble, 19 in Woods, 13 each in Kingfisher and Woodward, 11 each in Grant and Major and eight in Blaine. No cases were reported in Alfalfa County.

OSDH’s weekly numbers — which OSDH acute disease service reports to the CDC — on Wednesday showed Oklahoma has 7,485 confirmed deaths, a weekly increase of 31, though the CDC/NCHS’ Provisional Death Count, which is based on death certificates and is OSDH’s primary reported number, placed the overall count in Oklahoma at 8,713 deaths, a weekly increase of 36, in which the coronavirus was the cause or a contributor.

There have been 394 hospitalizations in the past week, bringing the total to 27,969, and according to OSDH’s Situation Update, there is a three-day average of 607 total COVID-19 hospitalizations — including 25 pediatric hospitalizations — an increase of 216 since last week. Of those, 191 are in the ICU, across the state.

On Tuesday, St. Mary’s Regional Medical Center reported it had four COVID-19-positive patients, and Integris Bass Baptist Health Center reported on Wednesday it had 12 COVID-19-positive patients. Of those 12, five were patients transported in from outlying communities in the state. All 12 of them were unvaccinated, though the tests Integris sends to OSDH do not come back, so it’s unclear whether any of them had the delta variant, said Kurt DeVaney, chief hospital executive.

“Integris, overall, has done a really good job of making ourselves available to outlying communities and hospitals where if their patients need a higher level of care, we will take them,” DeVaney said. “Obviously, we’re trying to prioritize taking care of the people in Enid and having beds available for them. ... It’s a fine balance, but our our caregivers and physicians do a good job of getting everybody and taking care of them as they need their their treatments.”

DeVaney said Integris developed “surge plans” last year to deal with increasing COVID-19 numbers and an influx of patients. He said when cases began increasing in the northeastern part of the state, the hospital began to prepare and make sure it had all of the necessary equipment in case Garfield County saw a surge.

“I think we’ll see a peak, probably, at some point over the next month,” he said. “I’m hopeful that it won’t last a few months, and hopefully, we’ll spike and then it drops down, and we can get back to normalcy, but it’s hard to guess. I think anybody that can answer that question might have a crystal ball.”

Most of the entire state of Oklahoma, including Garfield County turned “orange” this week for OSDH’s weekly COVID-19 Risk Level System.

According to the COVID-19 Risk Level System, which is released every Wednesday, 63 of Oklahoma 77 counties are in the moderate, or “orange,” risk level; 12 are in the low, or “yellow,” risk level and two are in the new normal, or “green,” risk level.

Garfield County saw green on May 12 for the first time since OSDH began releasing county risk level trends and dipped into the “yellow” risk level on June 23 and “orange” on July 28. This week, Garfield County reported 17.5 cases per 100,000. 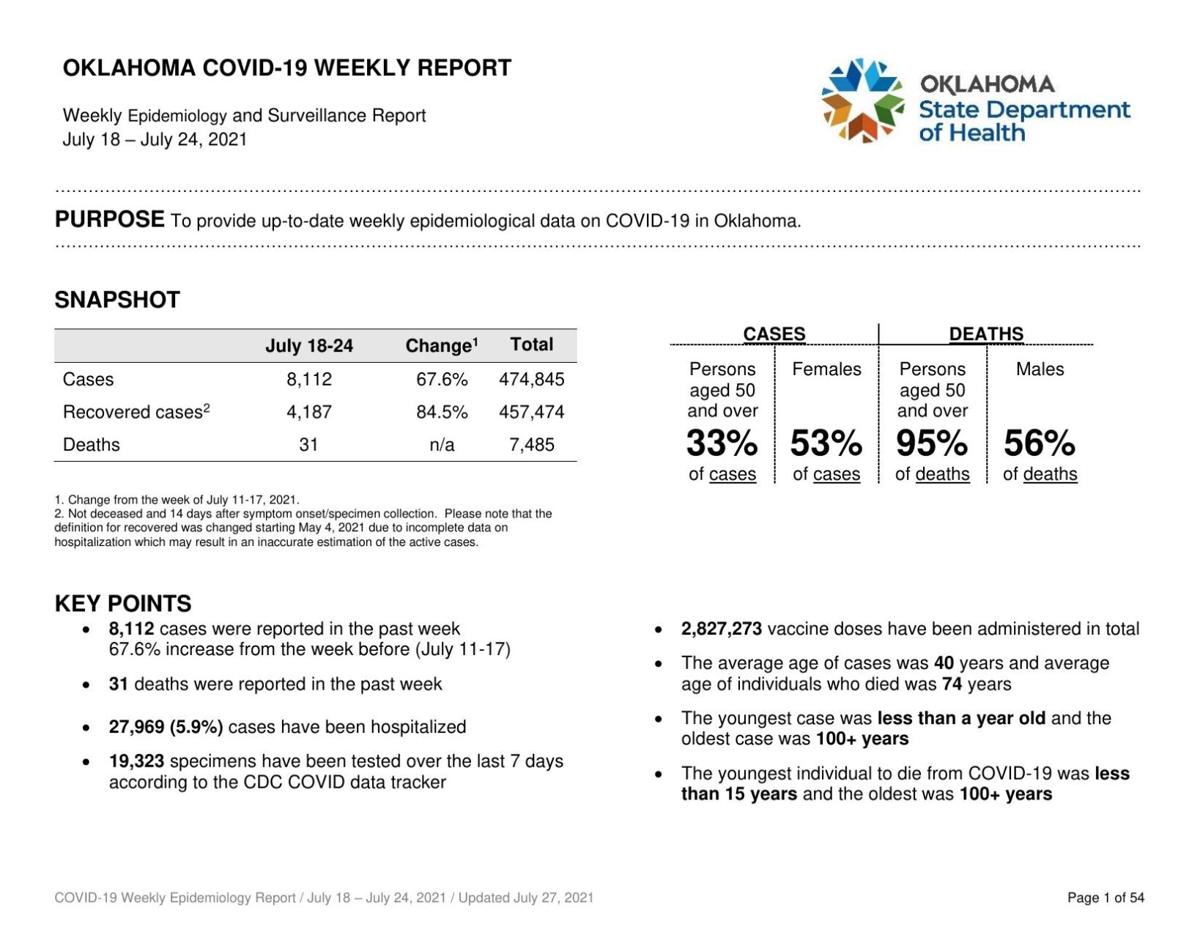 COVID-19 cases saw an increase of 67.6% in the numbers of reported cases statewide compared with the previous week, according to OSDH’s Weekly Epidemiology and Surveillance Report, which is also released every Wednesday.

OSDH reported 33% of the cases were people aged 50 and older, and 95% of the deaths were in that same age group.

COVID-19 patient hospitalizations remained at 5.9% statewide in a week-to-week comparison. Since the first case was confirmed in Oklahoma in March 2020, the number of admissions to state hospitals was at 27,969, according to the report.

According to OSDH, 40.5% of people 12 and older in Garfield County have completed the series, along with 73.7% of those 65 and older who have also been fully vaccinated.

Maggie Jackson, OSDH regional director of community engagement and health planning who oversees Garfield County Health Department, said the Health Department has seen an uptick in COVID-19 tests and vaccination appointments in the past week as the county gained more cases.

“I think people are seeing the (delta) variant, and they’re seeing that vaccinated people are less likely to go to the hospital, and that has convinced them that it is time now to get a vaccine,” Jackson said. “I also think as people transition to school and different things that start up in August, people are looking to prevent COVID-19 in their families and in their school events.”

She said the Health Department is still trying to make it as easy as possible to schedule vaccination appointments, and several mobile vaccination events have been planned, including an immunization clinic with Enid Public Schools on Aug. 17, which will include vaccines for tetanus, diphtheria and pertussis along with the COVID-19 vaccine.

Jackson anticipates more reported cases in the coming week and said the Health Department recommends residents continue to practice the “three W’s” to help mitigate the virus’ spread in the county.

“It’s still the same message: Wear your mask, wash your hands and watch your distance,” she said.

• Kingfisher with 2,086 cases, 2,028 recovered, 16 active and 42 deaths, 21 from Kingfisher, 12 from Hennessey, four from Okarche — which Kingfisher shares with Canadian County — two from Dover and three not listed by town.

• Alfalfa with 1,156 cases, 1,149 recovered, none active and seven deaths, with city data listing three from Carmen, two each from Aline and Helena and one each from Cherokee and Jet. City data encompasses rural towns that could include those residing in neighboring counties, which could cause the discrepancy.

• Major with 968 cases, 937 recovered, seven active and 24 deaths, 17 from Fairview, two each from Cleo Springs and Ringwood and three not listed by town.

• Grant with 562 cases, 551 recovered, four active and seven deaths, three from Wakita and one each from Deer Creek, Lamont, Medford and Nash.