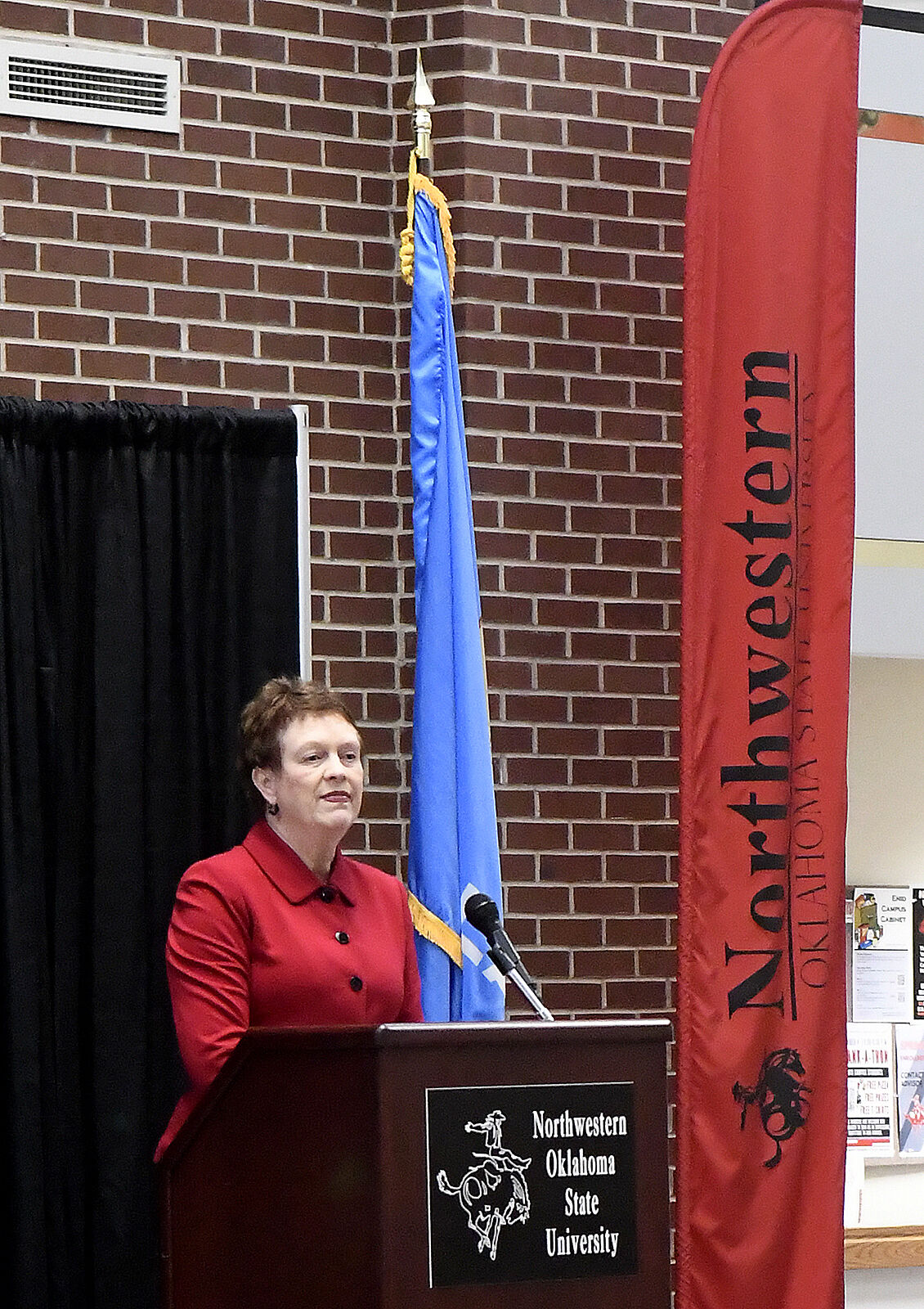 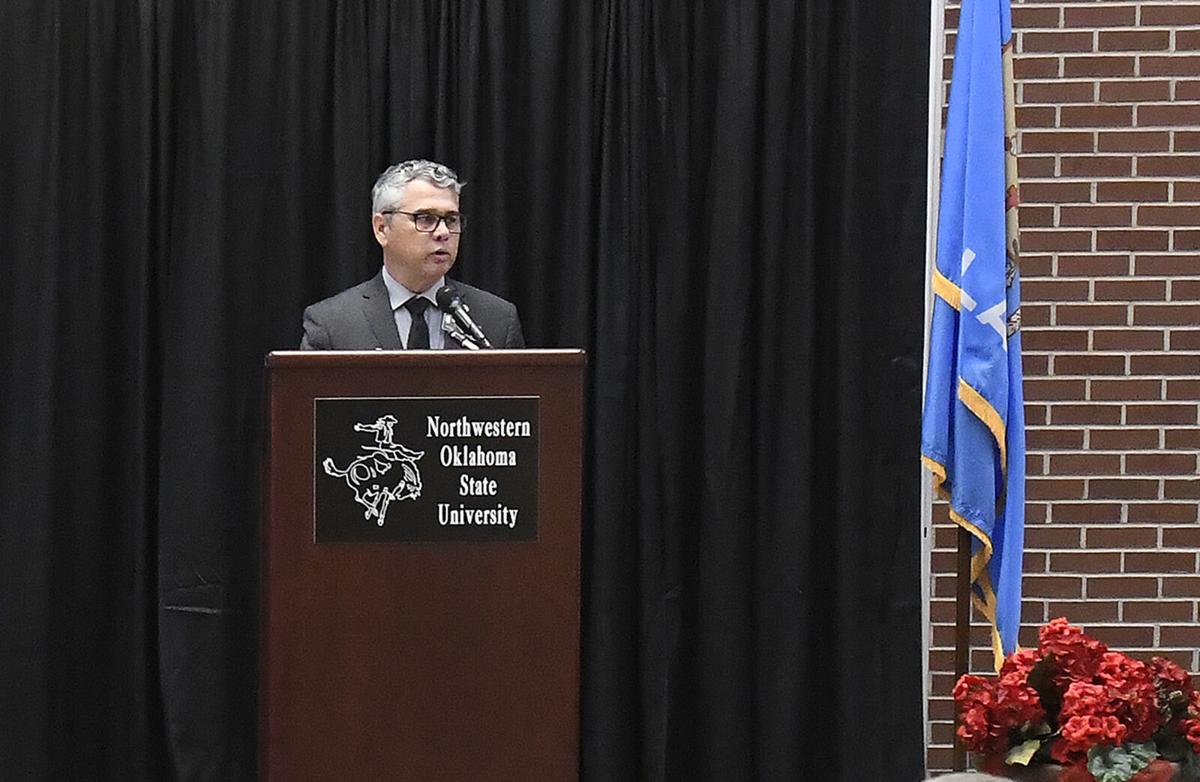 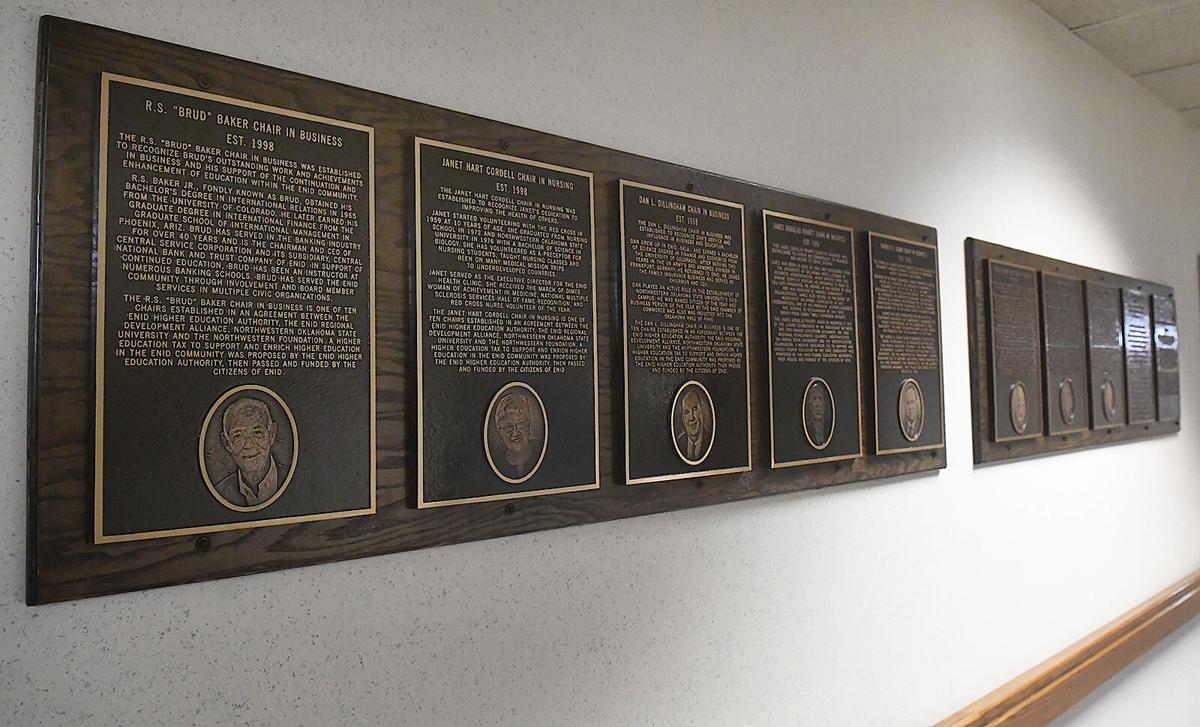 NWOSU usually honors its faculty and staff each semester, so Enid’s campus decided to build on that occasion to recognize the last quarter century, as well, campus dean Wayne McMillin said Thursday.

NWOSU President Janet Cunningham, visiting from Alva’s main campus, said those present Thursday showed the numerous partnerships that have made the branch campus a success.

“All the partnerships in this room show how committed we are to higher education in Northwestern Oklahoma for the past 25 years, and will continue to be for the next 25 years,” Cunningham said.

Though classes began at 2929 E. Randolph in fall 1996, the path to open the NWOSU-Enid campus took several twists and turns.

The land at 30th and Randolph initially was intended as the permanent site for the program’s learning center, having been chosen in 1992 following negotiations with then-owner Phillips University.

NWOSU dignitaries, including President Janet Cunningham and current Enid dean Wayne McMillin, will also be on hand to honor the namesakes of the Enid campus’ endowment funds department chairs during the ceremony, set for 2 p.m. Thursday at 2929 E. Randolph.

Construction started in 1993, and classes among the three higher ed programs began at the center in 1995. Soon after, though, a state House bill provided for two NWOSU branch extensions, including one in Enid, and NWOSU took ownership of the building in July 1996.

Cunningham said she thought the building looked as beautiful as when it opened 25 years ago.

“The ability of students to pursue their bachelor’s or master’s degree, without putting life on hold, has transformed lives and has fulfilled the dream of those who fought for public higher education in Enid,” Cunningham said.

Nursing student Mary Henderson, who got her associates from NOC in the early-2000s, said she considered herself somewhat of a nontraditional student, who returned to school to get her bachelor of science in nursing after her children went to high school.

“This is my soft spot now,” she said. “The faculty, they really care. It’s not a stiff environment. … It’s really nice to feel like you’re (with someone) that really cares, that’s not just, ‘I’m gonna teach you this, this is what you need to do.’”

Ten newly mounted bronze plaques now hang on the wall of a first-floor hallway to honor the namesakes of the endowment funds for Enid’s faculty department chairs. Professors’ salaries and stipends are funded indefinitely as endowed chairs.

In 1999, she, EHEC founding member Bert Mackie and the university foundation’s director asked the city of Enid’s board of commissioners to invest $2.5 million in the university’s endowment funds for its Enid campus. The state Regents of Higher Education then matched that amount for a combined $5 million endowment.

Eight professors currently hold the endowments, McMillin said, including two who have two each.

Mackie, who had an endowment fund business department chair named after him, said each chair was funded with $500,000, with added interest going back the university to help subsidize salaries.

“Being recognized for business, I know every one of those gentlemen and ladies who got the chairs are all very deserving of it,” he said, before pointing at the plaques. “That’ll be there forever.”

Mackie said these funds were essentially returning the money Phillips University had paid the city of Enid to buy back the campus, before filing for bankruptcy and closing in 1998.

“The ability of students to pursue their bachelor’s or master’s degree, without putting life on hold, has transformed lives and has fulfilled the dream of those who fought for public higher education in Enid."

The city initially had purchased the struggling Phillips campus using funds from a 1987 citywide proposition, which was later unsuccessfully challenged in court. That campus later became the NOC campus in 1999.

Jason Ferrell, whose psychology chair is named on behalf of the residents of Enid, said finding an institution that supports a full-time faculty position is more difficult than working in a temporary one.

“I’m just honored that the citizens of Enid invested in higher education, and on a long-term basis,” Ferrell said. “Often an organization’s or a city’s values are where they place their money, and so they’ve placed their money in education.”

In 1992, Enid residents voted to direct six years of sales tax revenue from the 1987 Phillips proposition to fund construction of a building for the Enid Higher Education Program, in the building that eventually became the NWOSU-Enid campus.

Enid Mayor George Pankonin presented a proclamation to the university on behalf of the city before commenting on the two’s relationship over the last quarter century.