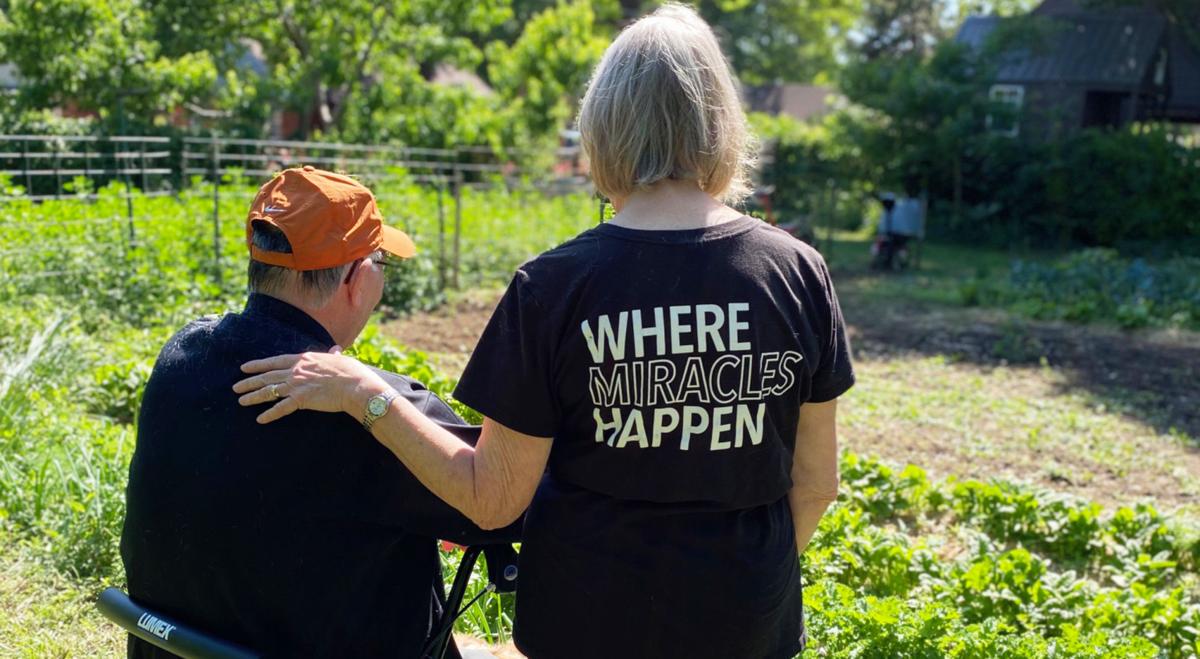 Geoffrey and Steffi Cowan, of Ponca City, look at their garden after Geoffrey was dismissed from the hospital and acute care following a weeks-long battle against COVID-19. 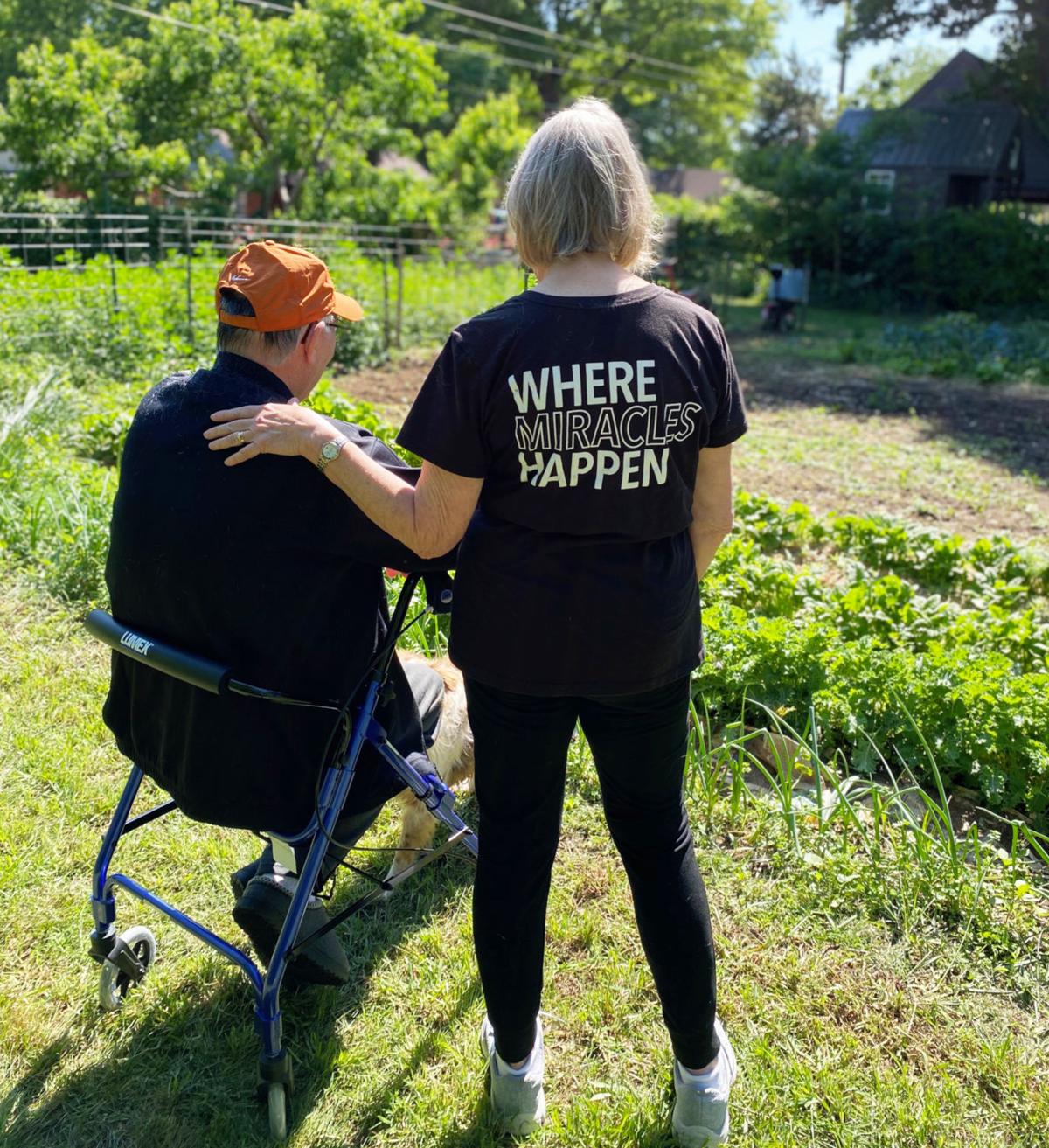 Geoffrey and Steffi Cowan, of Ponca City, look at their garden after Geoffrey was dismissed from the hospital and acute care after a weeks-long battle against COVID-19. 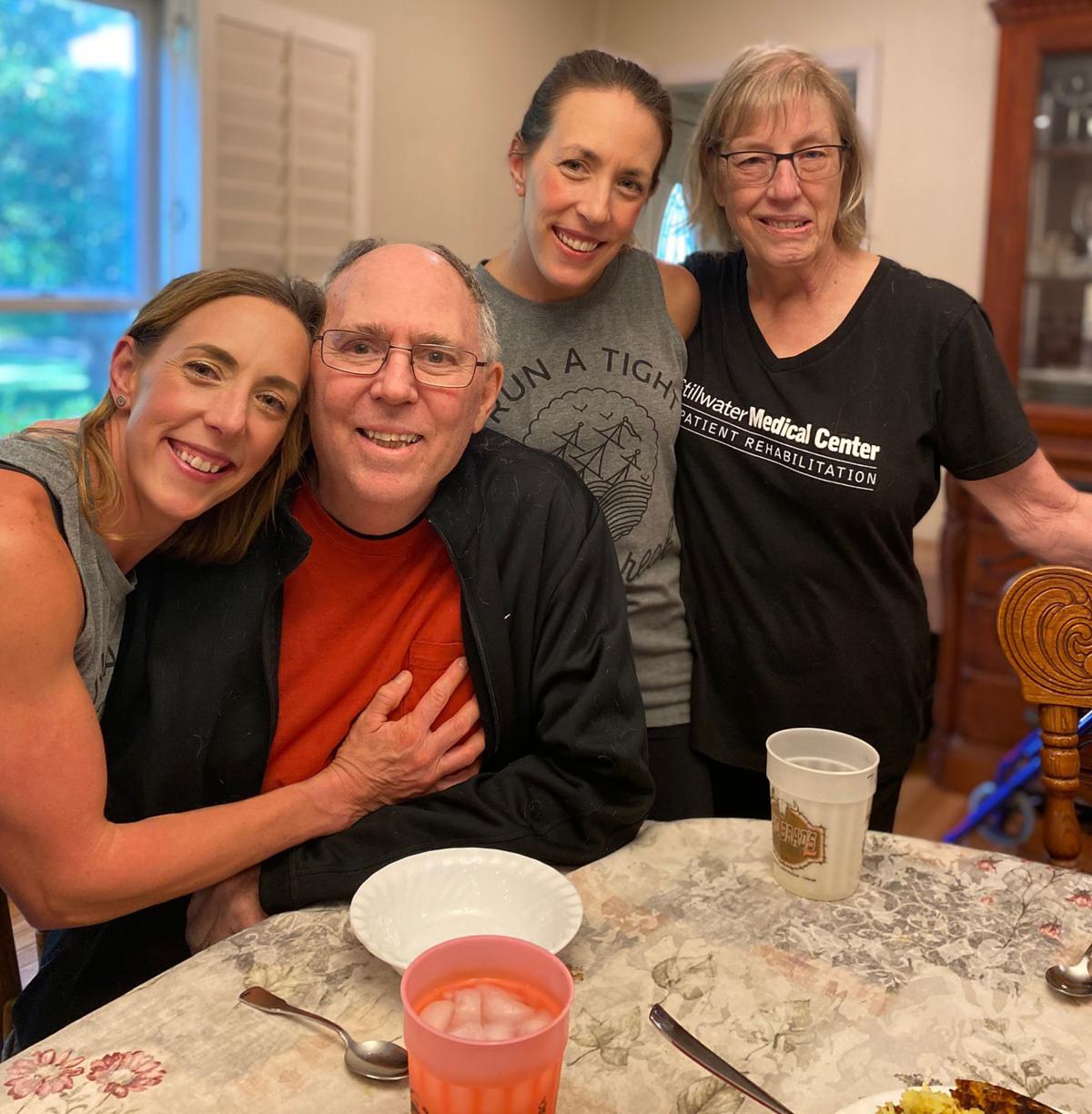 Geoffrey and Steffi Cowan pose with their twin daughters, Christy Yousefi and Jennifer Daniel, at Geoffrey's homecoming celebration and first meal at home after 51 days of separation while he was battling COVID-19. 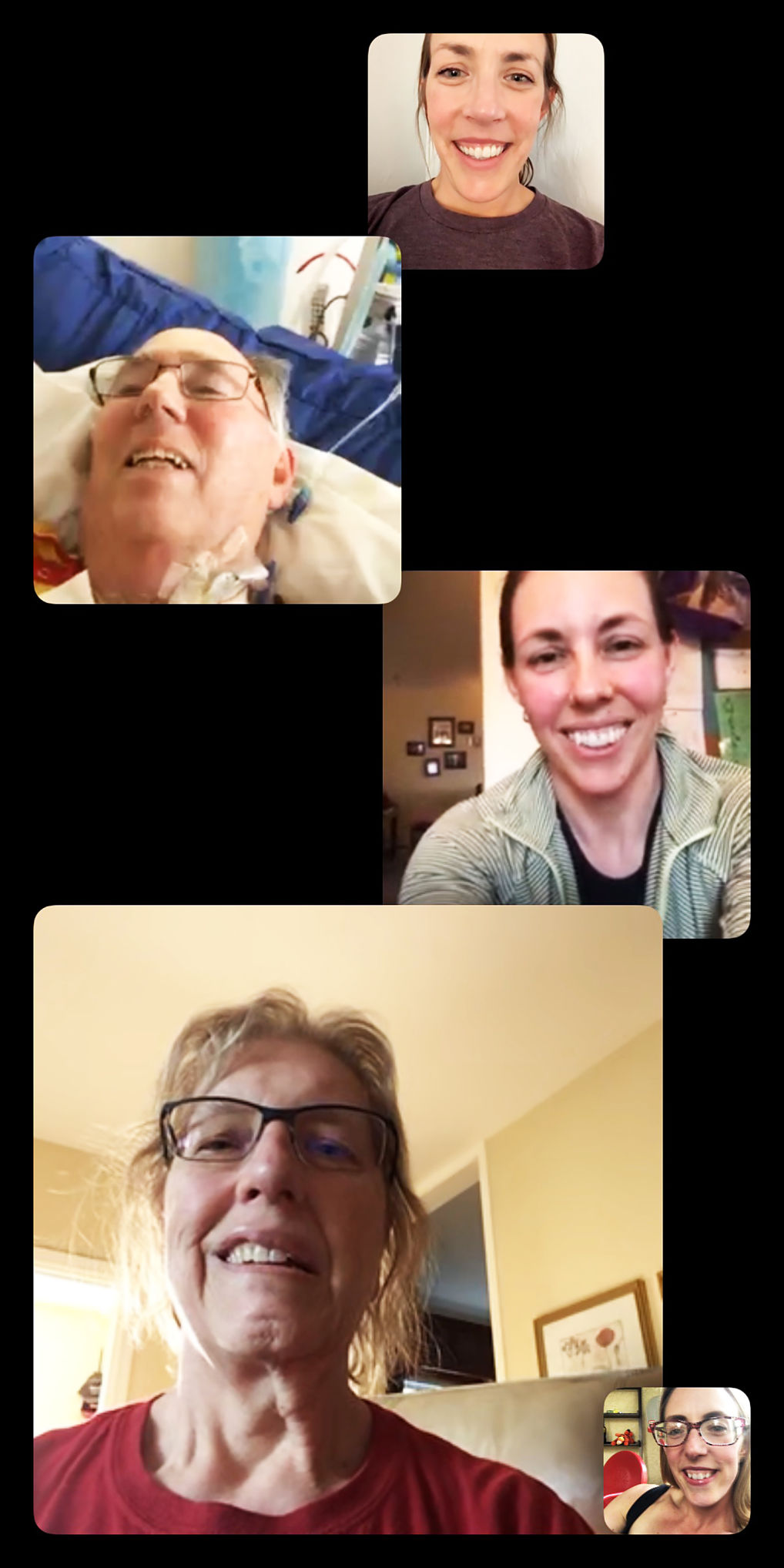 The Geoffrey Cowan family chats during a Facetime session on Geoffrey's last day in intensive care. Geoffrey and his wife, Steffi, are recovering after contracting COVID-19. 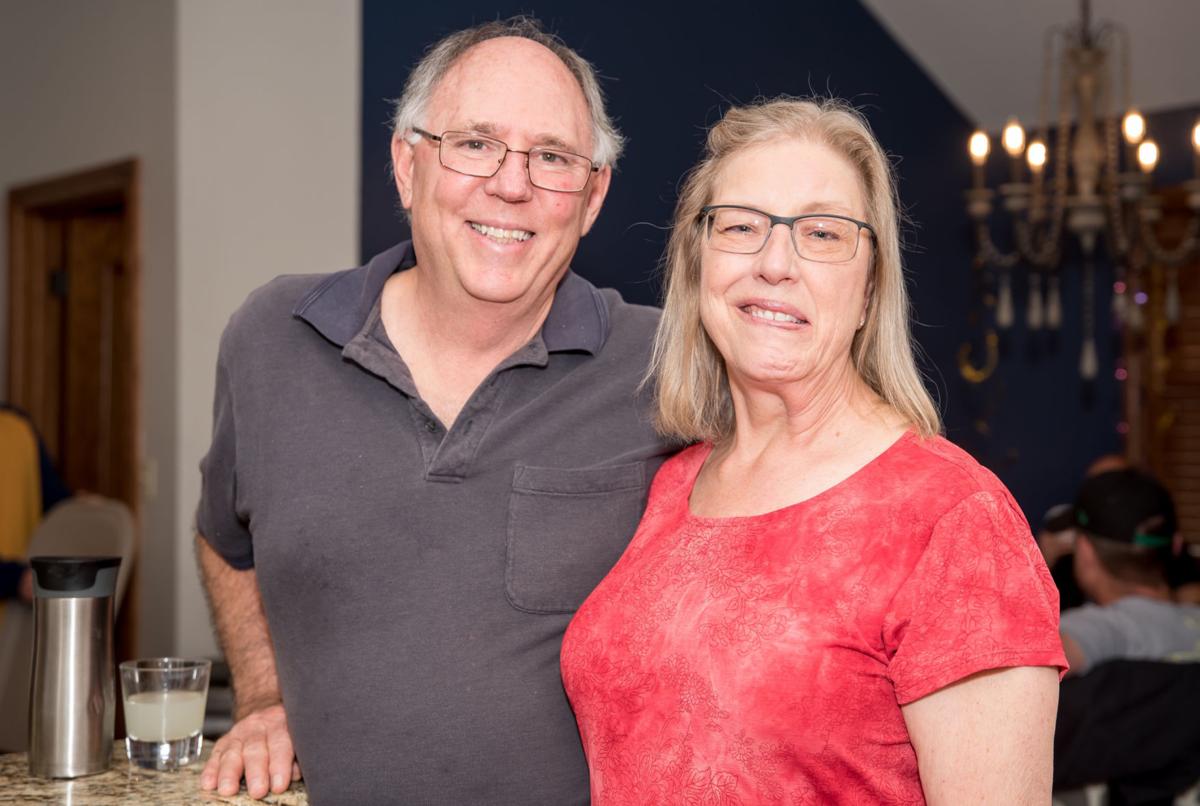 Geoffrey and Steffi Cowan pose during a family celebration.

PONCA CITY — A Ponca City family with Enid ties continues to recover at home from the side effects of COVID-19.

What began as a routine checkup for Geoffrey Cowan, 69, quickly spiraled out of control. On March 16, 2020, Cowan, whose parents were from Enid, was diagnosed with the illness, sent to the emergency room the next day and admitted to the hospital, where he spent the next four weeks.

“I don’t recall anything besides going through the door of the emergency room,” Cowan said. "They put me in a medical coma for three weeks and had me significantly sedated after that. I only recall the last two or three days of my one-month stay at the Ponca City hospital."

❝This is my DAD. This is COVID-19. This is real.❞ — Former Ponca City resident Christy Yousefi

During his stay, Cowan remembers experiencing non-threatening hallucinations as a side-effect of the virus and trying to make sense of what was happening.

“One of my hallucinations was waking up in the middle of the night and seeing people playing peek-a-boo with me, and I assume that was the medical staff pulling back the curtains and checking on me. It was a rather interesting sensation,” he said.

Despite intense supervision, there were several times when medical personnel were not sure Cowan was going to live, he said. His wife, Steffi Moon Cowan, later told him the doctors had difficulty getting oxygen in his system, and one of his lungs was "blown out" in the process.

“That was a critical point as far as not getting sufficient oxygen,” Cowan said, “and that’s when they put the trache in to try to improve that.”

The Cowans' daughter, former Ponca City resident Christy Yousefi, was a driving force in her father’s health battle. Yousefi, who now lives in Alabama, was in touch with a physician working with COVID-19 patients on the East Coast, and she was able to relay his instructions to the hospital staff in Ponca City.

“I attribute their efforts to surviving,” Cowan said. "It was their idea to wake me up from the medical coma, and I think I began to have a turnaround when they did that.

“And I can’t say enough about the nursing staff. Reportedly, one nurse sang hymns to me — how many nurses do that?”

When the ventilator was no longer necessary, Cowan began his recovery journey — still getting oxygen through a trache — and was transferred to a long-term acute care facility on April 13 where he stayed for 15 days before being transferred again to a rehabilitation unit in Stillwater.

Not an easy recovery

During Cowan's hospital stay, Steffi also was admitted for issues associated with COVID-19. She was discharged after a week to quarantine and recover at home.

“The recovery for both of us has not been easy,” Geoffrey said.

He was discharged to go home May 7, but he and his wife continue to face long-term side effects.

“Part of the knowledge about COVID-19 is that once you get over having had the virus, there’s the recovery part,” he said, “and we’re acutely aware of that process.”

Side effects of COVID-19

Though Geoffrey and Steffi continue to struggle with endurance and fatigue, they said they feel blessed in the sense that Geoffrey escaped heart or major respiratory problems other COVID-19 patients have faced.

A few of his side effects are a tremor, difficulty writing and a significant loss of muscle tissue.

A Ponca City man with Enid ties is still battling COVID-19 in an intensive care unit while his wife is recovering from the disease quarantined at home.

“The tremor has improved somewhat — though it makes eating an adventure — and I do have difficulty writing," Geoffrey said. “This weekend, I was trying to endorse some checks but simply wasn’t able to make it legible, so I had to get Steffi to do it.”

“I’m knee-deep in trying to regain strength,” he said.

Cowan was diabetic prior to the illness, and that has since exacerbated. He does not desire to be on insulin, he said, and convinced the doctors to let him control the diabetes with diet and other medication, and they’ve been successful in doing so.

Though the side effects are different for every patient, COVID-19 has also had an effect on their appetites, the Cowans said.

“Meat is no longer appetizing — beef in particular — so I’m eating a lot of chicken and fish. It’s not that I can’t eat certain things, I just don’t have a taste for it,” Geoffrey said.

Cowan said he sees a physical therapist three days a week, as well as an occupational therapist.

My physical therapist told me it might take as long as a year before I regain muscle mass comparable to where I was prior to the illness,” he said. “It’s rather overwhelming to hear that, but I’m trying to be patient.”

Steffi’s said her biggest obstacle in recovery is a slight loss of verbal memory and her sense of smell.

“I know the concepts of things I want to talk about, but sometimes I can’t find the words that I used to know,” Steffi said. “They just won’t come.

“And I still can’t smell anything. It’s started to come back, but it’s not nearly as good as Geoff’s is. It’s very strange,” she said.

Despite every obstacle, the couple continues to emphasize appreciation of the support they received across the country.

“It’s unbelievable, the number of people that were rooting for me and helping me through this very difficult time,” Geoffrey said.

The journey proved not just physical but mental, as well. Geoffrey works as a mental health therapist and admitted to experiencing a significant degree of depression while he was in the hospital.

“Mentally, the most difficult part was the profound sense of isolation,” he said. “The hospitals were very cautious, and there was no interaction amongst the patients of those units, so my only contact was with the medical staff and virtual conversations with my family.”

“I was crying multiple times a day and finally decided to talk with someone, which was helpful in tracking my experience with both the illness and the recovery,” he said.

The couple’s story continues not just as one of illness and recovery but of positivity and continued faith, as well as the faith their story restored in others.

“One of my daughter’s friends admitted to losing her faith, but as she followed my journey she commented that she was able to regain it,” Geoffrey said, “and it’s just amazing it could have that impact.”

“Yes,” Steffi agreed. "She started praying again after seeing hundreds — sometimes thousands — of responses to (social media) posts by our daughters. She said it restored her faith.”

Goulart is an intern for the Enid News & Eagle.