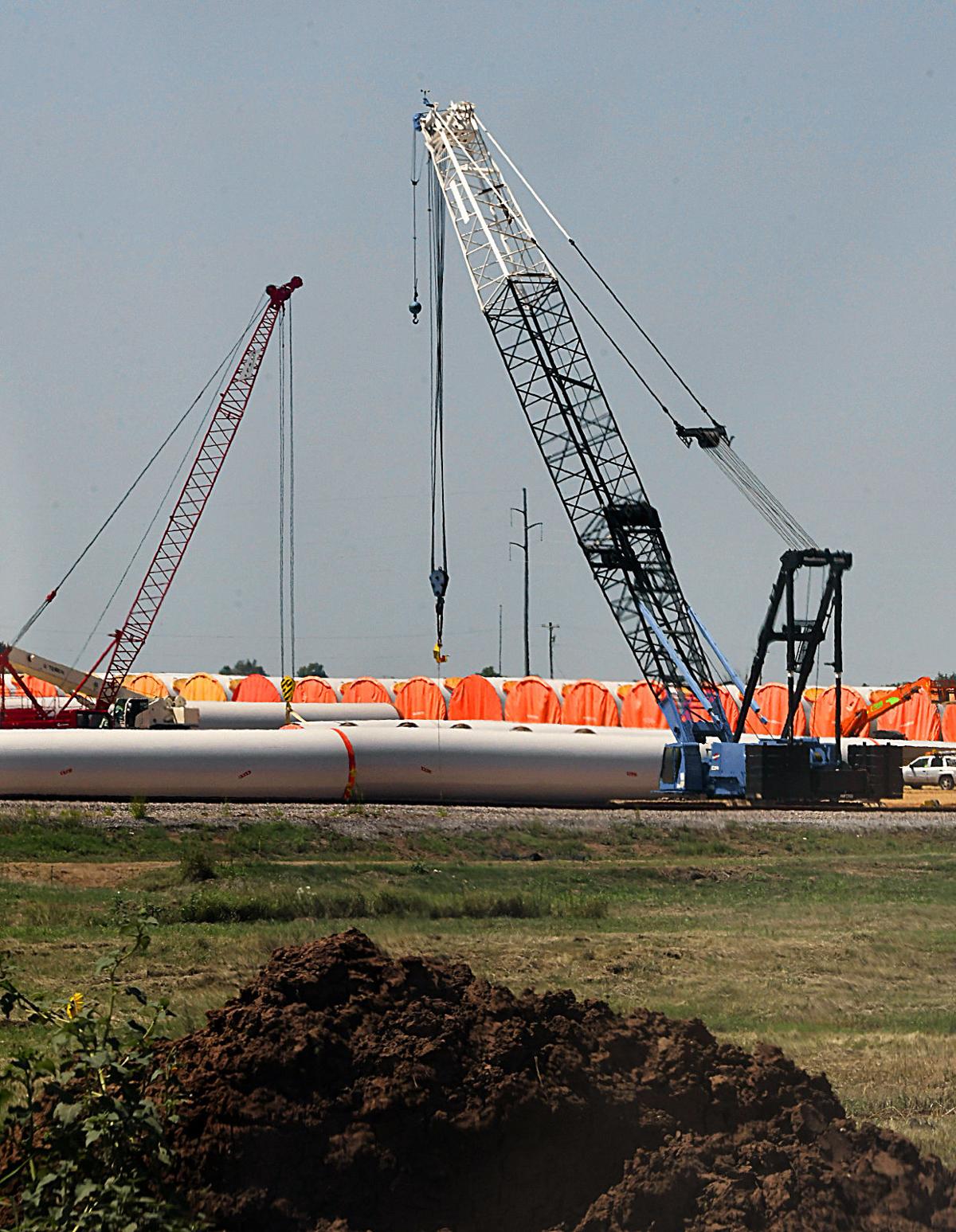 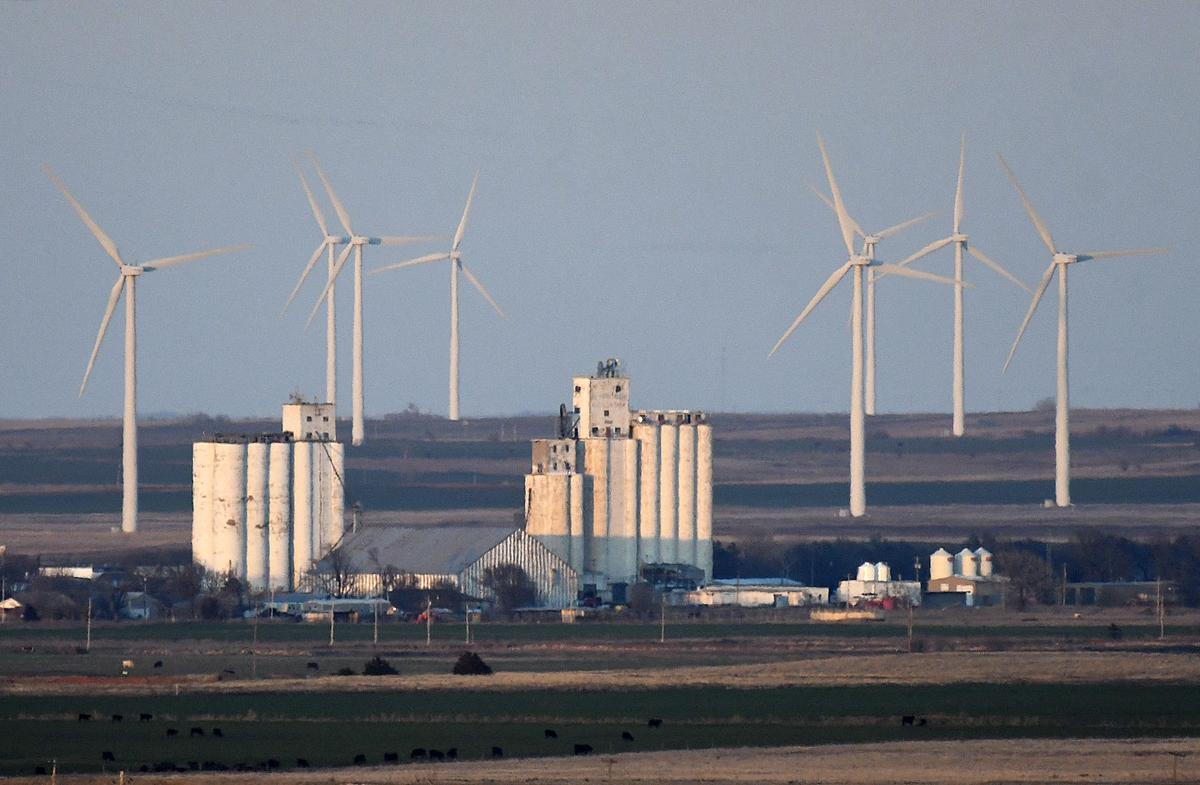 The setting sun begins to create a glow on the grain silos in Kremlin and the wind turbines to the east Tuesday, February 18, 2020. (Billy Hefton / Enid News & Eagle) 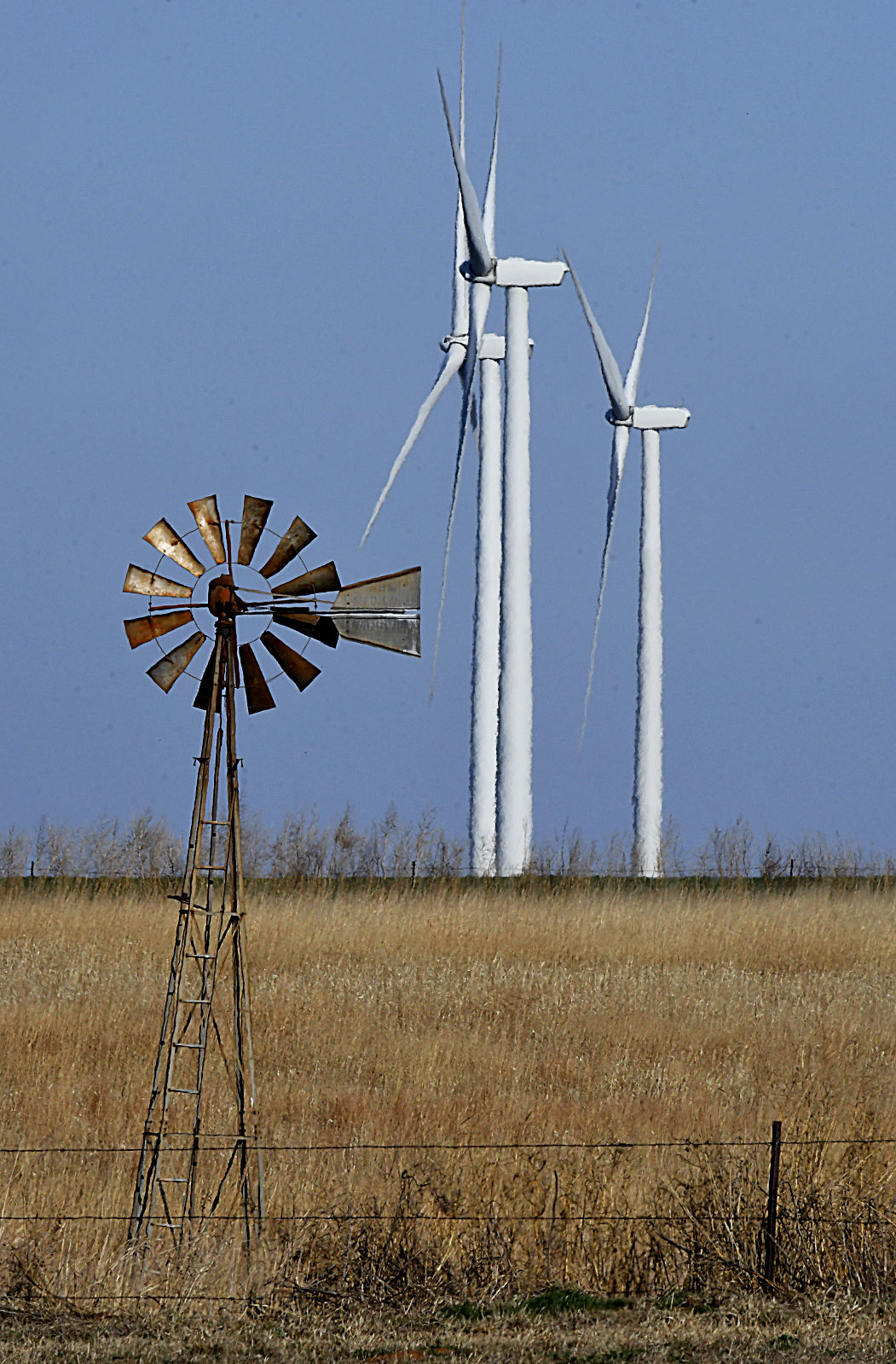 The setting sun begins to create a glow on the grain silos in Kremlin and the wind turbines to the east Tuesday, February 18, 2020. (Billy Hefton / Enid News & Eagle)

Mike Lienhard, project manager for NextEra, briefly outlined the company’s holdings in Oklahoma and worldwide, including wind, solar, gas and oil projects in 36 states and Canada, and in five nuclear power plants in the United States.

NextEra was the top wind and solar power generator in 2019, Lienhard said, and the company now has 15 wind farms in Oklahoma, with four in development.

Thus far, NextEra has reported $5.6 billion invested in the state, generating $32.6 million a year in payroll, and another $9.1 million in annual property tax revenue.

All that taken together puts Oklahoma at the top of NextEra’s priority list, Lienhard said.

“Oklahoma is the most important state for us in the company right now,” he said, “because of the investments we have here.”

The next big investment for the company is the Skeleton Creek wind farm project, a 250 megawatt project initially planned to be up and running by the end of 2019. The project has been pushed back by a year due to requirements to deconflict the development with airspace requirements for the Air Force.

Lienhard said Skeleton Creek now is ready to commence construction, and should be complete by the end of the year. With construction nearing, he said all parties involved are glad the requirements could be met to preserve the Air Force’s airspace and allow development to continue.

“We understand the military training routes and the setbacks of the Air Force, and how vital those are,” Lienhard said. “It’s just a very lengthy process ... I wouldn’t consider it an issue. There’s just a lot to it.”

While navigating the airspace requirements may be cumbersome, Lienhard said the overall environment in Oklahoma is productive.

“Oklahoma is a great state to work in,” Lienhard said. “It is the most important state in our company, because of being able to operate here, because of the work we’ve already done, and because of the relationships we’ve been able to build at the Capitol.”

In addition to the wind farm, Skeleton Creek production also involves a 250 megawatt solar panel farm and a 200 megawatt battery facility — both of which should be completed in late 2023, Lienhard said.

The total footprint of the project — the wind farm, solar farm and energy storage facility — will include Garfield, Alfalfa and Major counties.

Once completed, the “largest combined wind, solar and energy storage project in the U.S.” will add 500 megawatts to the regional power grid, plus another 200 megawatts from the energy storage facility for up to four hours, if fully charged.

Taken together, Lienhard said the wind farm, solar and battery projects represent about $600 million in new NextEra energy investments in the state.

And, he said, the demand for that kind of renewable energy development is only accelerating.

“Company-wide, the demand for wind and solar are only growing,” Lienhard said. “The efficiencies have come so far, the demand is incredible.”

The next big boom in renewables may be in solar, he said.

“The demand is there, it’s real and there is going to be a very big push for solar in the next 5-10 years,” he predicted.

ENID - Private family service for Phil E. Foss, 71, will be 10 a.m. today at Ladusau-Evans Chapel. Burial will be at Memorial Park Cemetery. You will be able to watch the service online at www.ladusauevans.com.

ENID - Graveside services are 2 p.m. Monday, April 6, 2020, Antioch Cemetery, Harris, under the guidance of Amy Stittsworth Funeral Service. Homegoing Celebration of Life will be held at a later date in Enid. www.stittsworthfuneralservices.com.