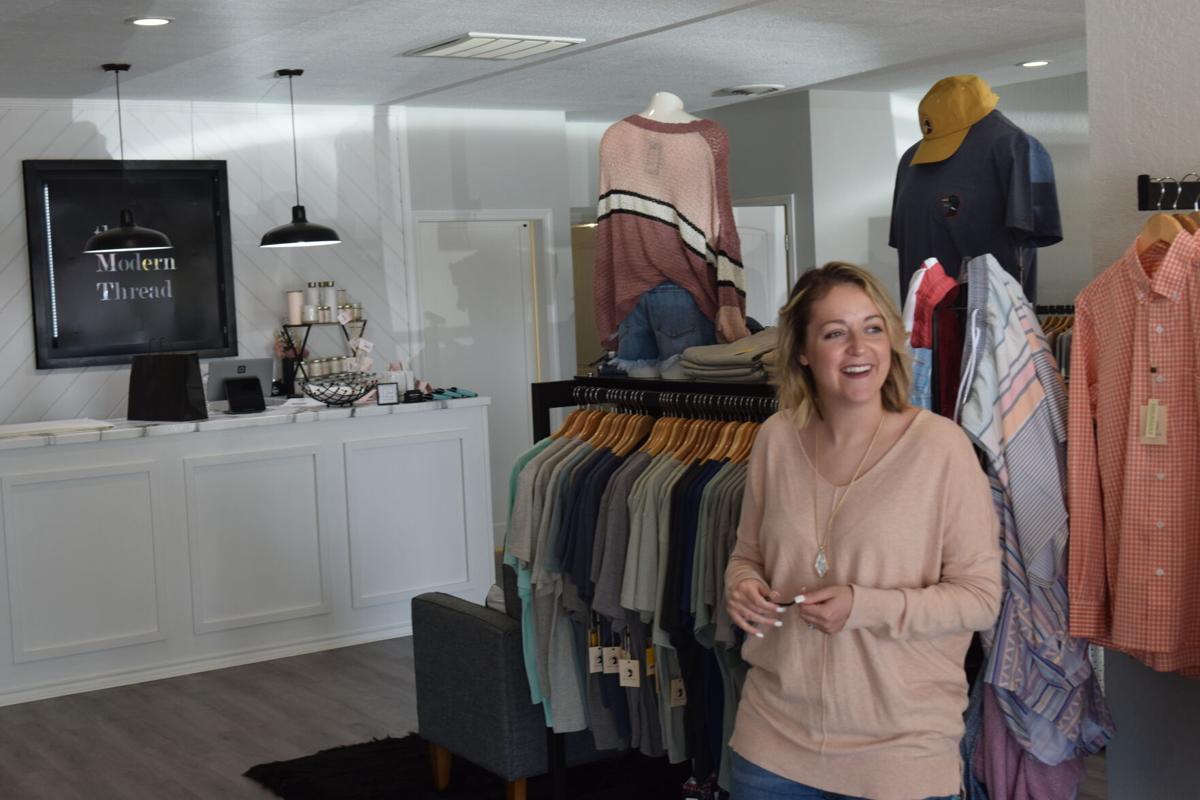 Owner Whitney McClure talks at her store, The Modern Thread, on Saturday, April 24, 2021. 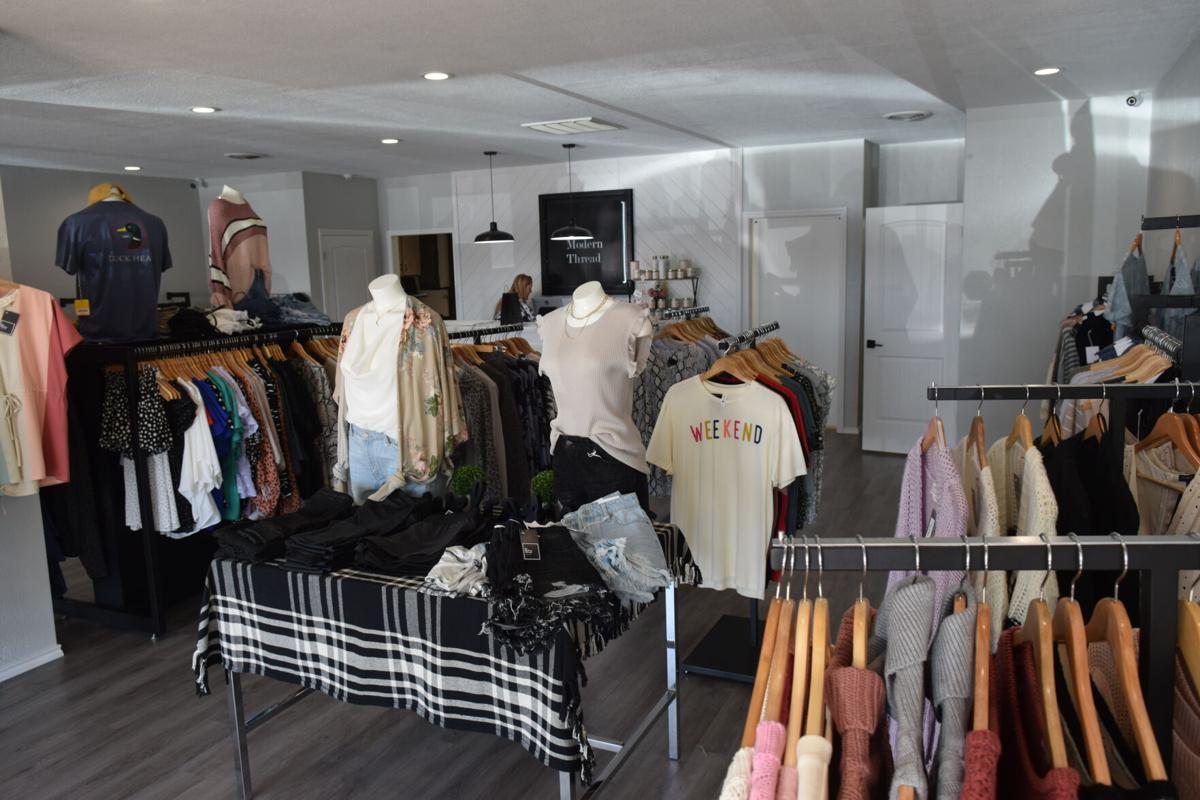 The women’s clothing side of The Modern Thread boutique. 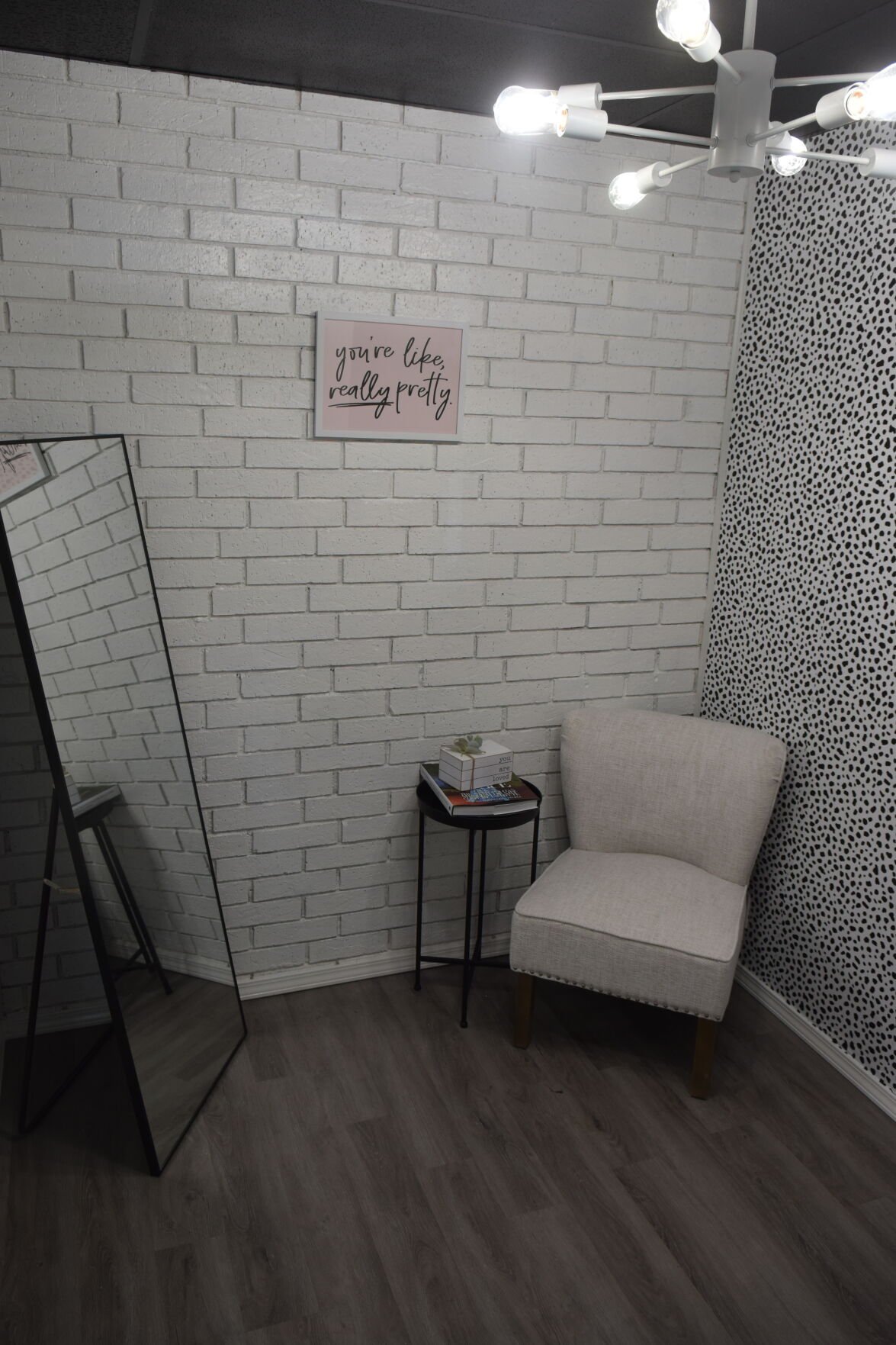 One of the two women’s dressing rooms at The Modern Thread boutique.

Along with clothing for women — also sold by many other local boutiques — The Modern Thread sells menswear such as button-down shirts, polos/T-shirts, khaki pants and shorts.

So far, it’s the only locally owned one to sell more professional (and more expensive) men’s fashion, which has been a long-neglected market in Enid.

McClure, who manages and owns the store, said she’s attempting to fill the void left by the recent closures of Dillard’s and JCPenney.

Until The Modern Thread opened in March, men in Enid were left without a place to shop in-person for business-like clothes when Oakwood Mall’s two anchor stores both closed in 2020.

“When we thought, ‘Hey, we could break into the market and be one of the first men’s boutiques,’ it was kind of a no-brainer,” McClure said. “I know that there are plenty people that need clothes and don’t want to go to Oklahoma City or don’t want to shop online. They want to come in and try things on.”

As the McClures designed it, the black-and-white store at 2228 W. Willow is divided in half — men’s apparel on the left and women’s on the right — with a wall partition down the middle and an entrance door on either side.

The Modern Thread at first was going to sell only women’s clothes, but her husband, John, who works at Edward Jones, wanted to have somewhere higher-end in town to shop for himself.

In January, went to men’s clothing market in Dallas, where fashion companies sell their wares wholesale to store owners who then resell them locally.

“I feel like I’ve always had jobs where I’ve always answered to somebody — which has been great, everybody I’ve worked for has been awesome,” McClure said, “but now this is like my thing. My vision.”

The brick-and-mortar store officially opened March 6, in the former location of the original EmmaKate & Co. boutique, but McClure had been taking sales online since last November.

Sales were full service while the Modern Thread store was being renovated. McClure would invoice her customers over email, then drop off orders at their homes herself or otherwise ship them out of town.

“I think it really helped to build the excitement that people had already been shopping with me, they knew what to expect,” she said. “Who doesn’t love to just sit and browse and look online? You literally don’t have to leave your bed.”

McClure has a boutique background, having briefly worked for Enid store Pearl Junkie after she graduated from college seven years ago.

She and her husband, John, moved back from Tulsa two years ago, during which she was also working Edward Jones until the pandemic forced her to leave because she was part-time.

The pandemic also put on hold plans for the two to start a family, she said.

“So I was literally sitting at home, and I was bored,” McClure said, until she went to EmmaKate to buy masks — and was quickly offered a job at the store.

For about six months, McClure worked for EmmaKate’s owner, Elizabeth Hurlbutt, who opened a second location in Stillwater while McClure managed the Enid store.

“Not that it was ‘easy,’” she said about returning to boutiques. “I just wanted something that was just more up my alley and not super stressful, planning people’s futures and helping them with their lives.”

McClure decided to start her own store when Hurlbutt decided to close Enid in September.

By the end of the month, she had her LLC and state tax ID number.

By November, she signed her lease for the same space and, as renovations began, started online sales.

The Modern Thread has both a public Facebook page and a private group with nearly 2,000 members, as well as an Instagram, on which McClure models the clothes and other items in photos and videos (though she said getting John to do the same is more of a challenge).

“I know that there are plenty people that need clothes and don’t want to go to Oklahoma City or don’t want to shop online. They want to come in and try things on."

Now that the store has been open, the “crazy whirlwind” McClure describes hasn’t been slowing down.

The Modern Thread had a vendor booth at the downtown event Weekends on Maine in April, and McClure said she plans on having another booth next month.

McClure also held a date night event in April that entered shoppers into drawings for a Land Run Steak House coupon, donated gift cards for both The Modern Thread and Land Run, and a photo session with Rose Photography.

“I’m trying to do things like getting out in the public so that way they can see me in different areas because this is hidden off the beaten path. A little hard to find. It’s like a little hidden gem, I don’t know,” she said with a laugh.