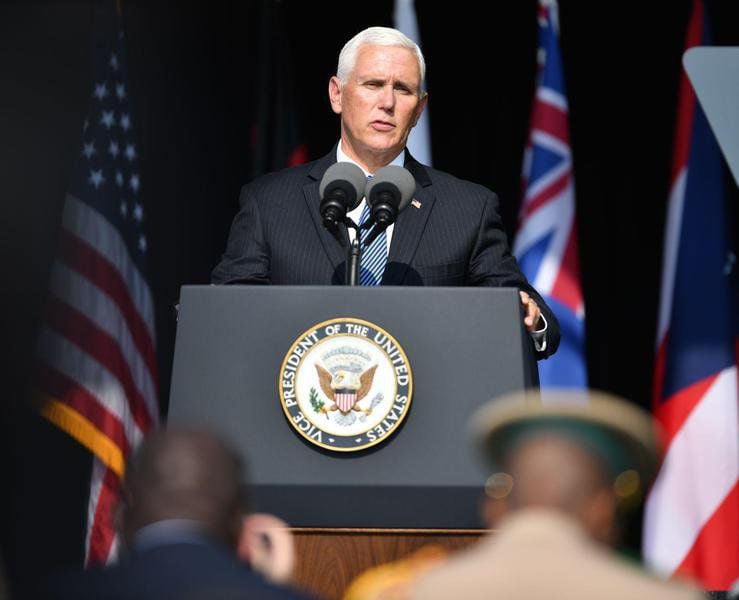 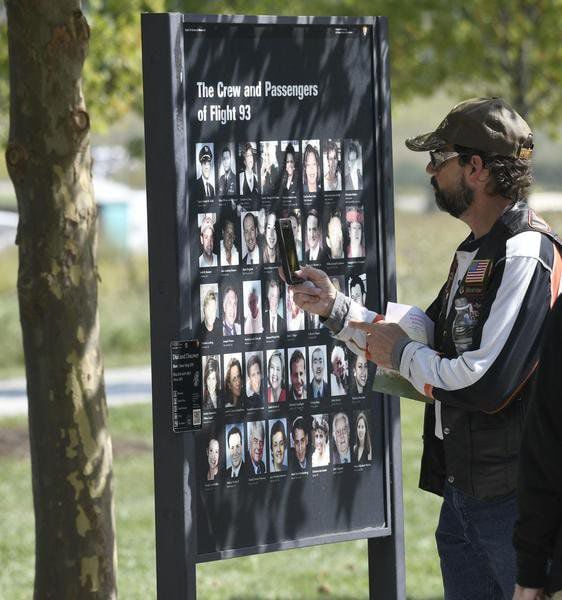 Dion Scallion, of New Lenox, Ill., takes a photo of the 40 heroes of Flight 93 during the 18th memorial service for Flight 93 in Shanksville, Pa. on Wednesday. (Todd Berkey / CNHI News Service)

Dion Scallion, of New Lenox, Ill., takes a photo of the 40 heroes of Flight 93 during the 18th memorial service for Flight 93 in Shanksville, Pa. on Wednesday. (Todd Berkey / CNHI News Service)

SHANKSVILLE, Pa. — Several hundred people gathered Wednesday at Flight 93 National Memorial near Shanksville, Pa., to mark the 18th anniversary of the Sept. 11, 2001, terrorist attacks and the crash of United Flight 93.

Mitchell Zuckoff, a Boston University journalism professor who has written a book about 9/11, said he was there to make “the apolitical case that, by their actions, their statements and ultimately their shared sacrifice, the 40 passengers and crew members of Flight 93 should be celebrated and emulated for representing the greatest of all American values.”

Those passengers and crew members fought back against four terrorists who hijacked the Boeing 757 with plans to crash it into a government building in Washington, D.C. Their revolt forced the hijackers to bring the plane down in a Somerset County strip mine, short of their target.

It was the only one of the four planes hijacked on Sept. 11, 2001, that did not reach its hijackers’ target; the others hit the two towers of the World Trade Center in New York City and the Pentagon in Arlington, Va. — killing nearly 3,000 people.

In making the case that the Flight 93 passengers and crew members represent the highest American ideals, Zuckoff noted that, even though most of them were strangers to one another, they “set aside individual interests” and came together to organize a cohesive revolt on the spur of the moment.

He also pointed out that passenger Jeremy Glick told his wife in a phone call from the hijacked airplane that the passengers planned to take a vote on whether to fight back against the hijackers.

“How American is that?” he asked. "Facing an existential crisis, they decided to vote on a response."

Zuckoff was one of several speakers during a ceremony that began at around 9:30 a.m. with a brief performance by Pittsburgh’s River City Brass Band. Stephen Clark, superintendent of the memorial, then welcomed the crowd, and the Rev. Paul Britton, brother of Flight 93 passenger Marion Britton, delivered an invocation.

Beginning at 9:57 a.m. and ending at around 10:03 a.m., the moment when Flight 93 hit the ground on Sept. 11, 2001, the names of the 40 passengers and crew members aboard the flight were read aloud, with two “Bells of Remembrance” being tolled after each.

The nation owes the passengers and crew a "debt of honor" to ensure their story of strength of selflessness lives on forever, Vice President Mike Pence told their families.

"We must never forget and never fail to honor the memory of those who were lost here, in New York City and in Washington, D.C.," Pence said, addressing a crowd of more than 700 people. "Here, at this memorial, the names of those 40 men and women are etched in marble. But I want to assure their precious families, they're also carved into the precious hearts and memory of the American people."

Audience member Mary Konieczny, of Pittsburgh, saluted organizers of the ceremony, which also featured comments by Secretary of the Interior David Bernhardt and Gordon Felt, president of the Families of Flight 93 and brother of passenger Edward Porter Felt.

“I thought it was a great ceremony,” she said. “I think it just keeps getting better.”

Konieczny said that she also attended anniversary observances at the memorial in 2017 and 2018. The 2017 edition of the event also featured Pence as the keynote speaker, and last year’s ceremony was headlined by President Donald Trump. This year, she and Mikayla Kuzma, also of Pittsburgh, decided to take advantage of a day off work to attend the observance.

“I thought, ‘What a great place to honor the patriots that died on this day.’ We’re both off, it’s 9/11 — there’s no better place to be,” Konieczny said.

“I felt the same way,” Kuzma added. “I had never been here, and I figured this was a great day to come.”

Their sentiments echoed those of Bernhardt, who also noted in his speech that, this year, the first children to be born after the attacks have begun to enroll in college. He said that Flight 93 National Memorial is "vital" in keeping the events of Sept. 11, 2001, alive for those teenagers and other young people for whom the attacks are simply a historical event.

After the ceremony concluded, Pence, his wife Karen, Bernhardt, Felt and many family members of the passengers and crew laid a wreath at the memorial’s Wall of Names. Several family members then visited the boulder that marks the spot where the plane hit the ground a short distance from the Memorial Plaza.