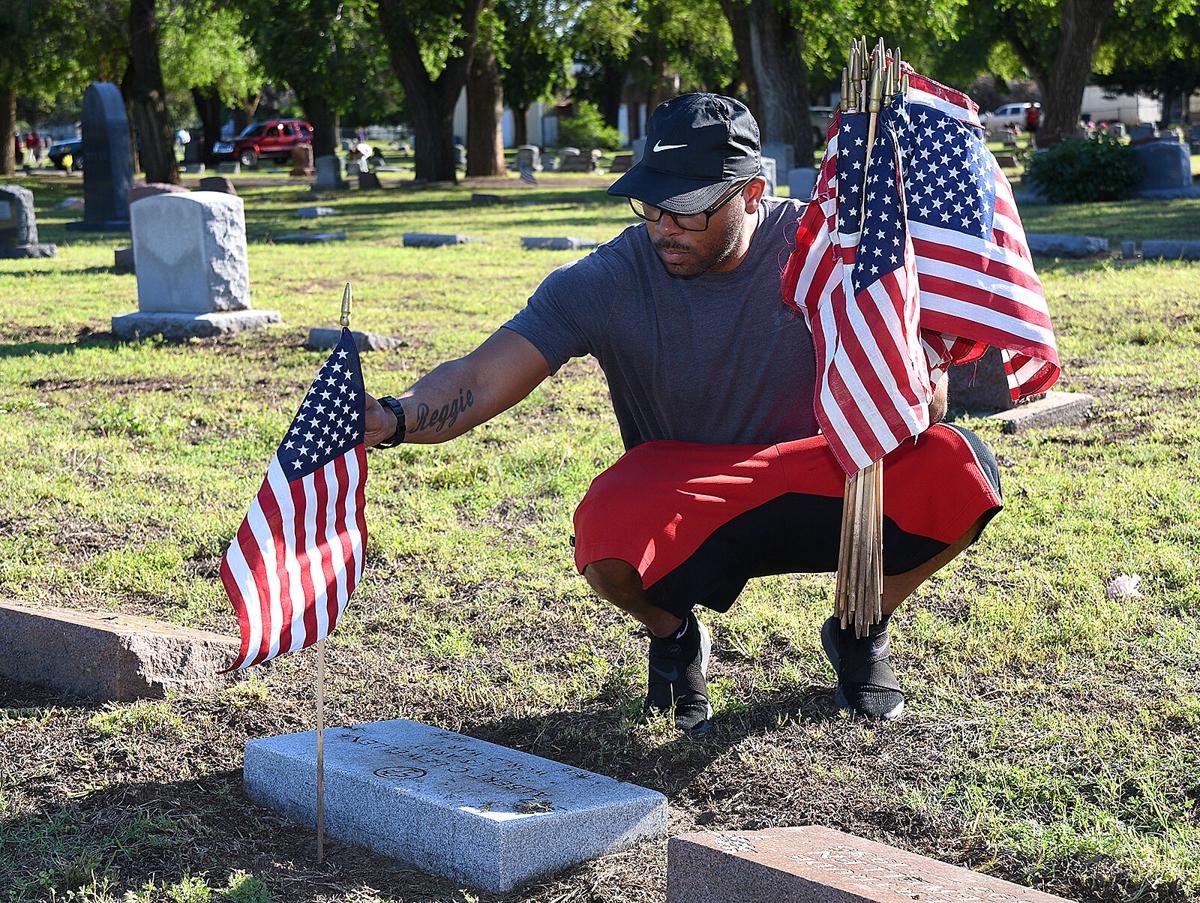 Charles Edmondson places a flag from the Air Force Sergeants Association at the headstone of a veteran at Enid Cemetery on Friday, May 28, 2021. (Billy Hefton / Enid News & Eagle) 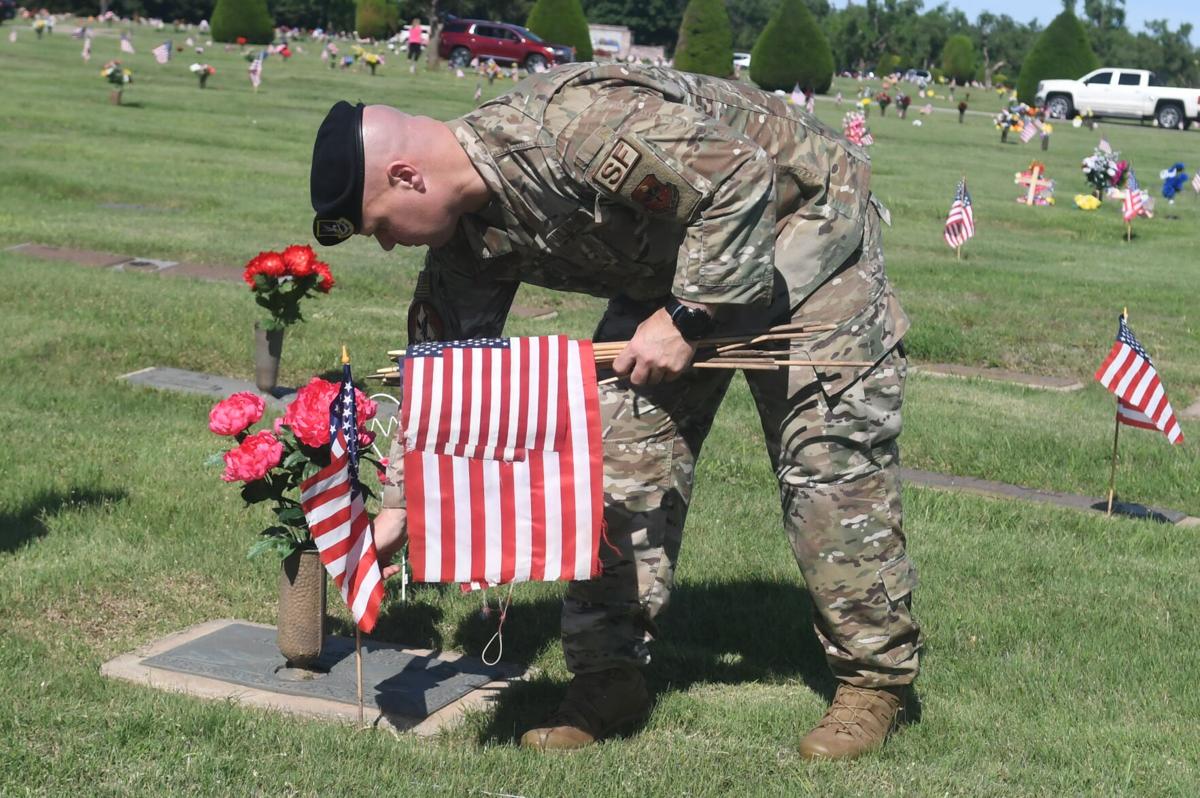 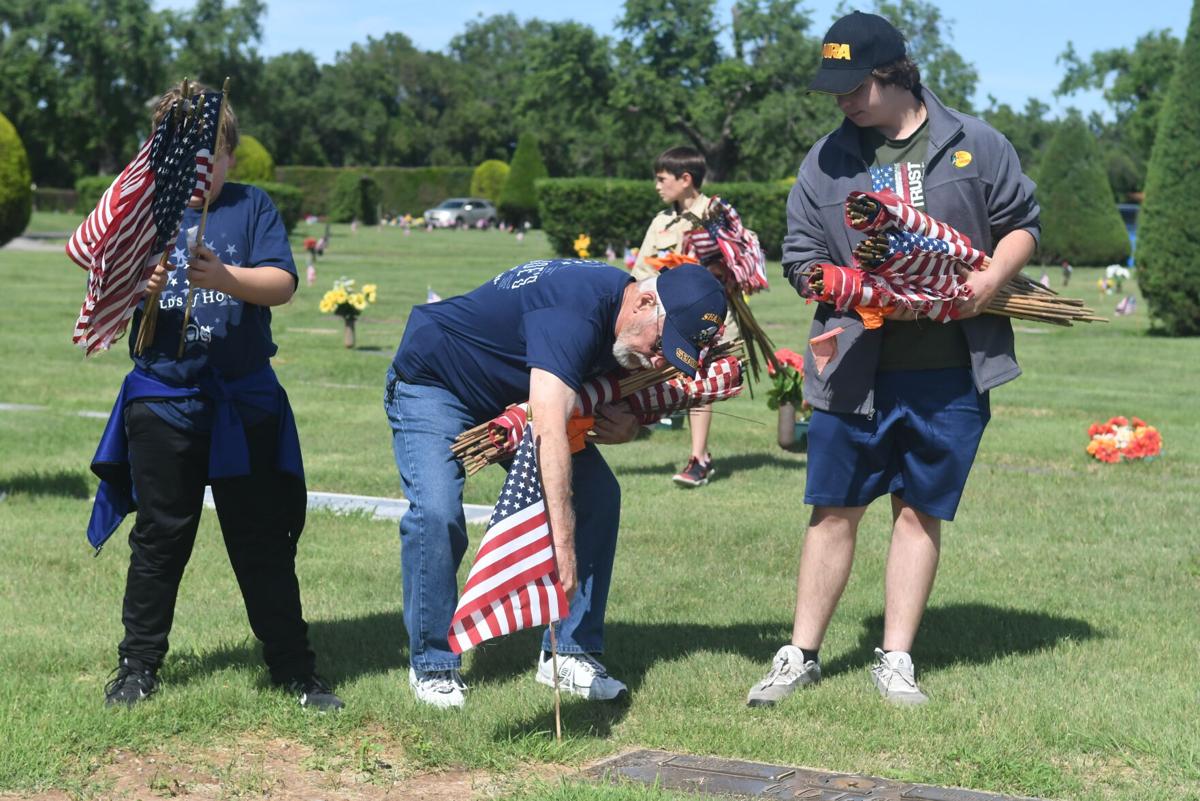 Lloyd Roberts (center) and his two grandsons Brenden (left) and Camden place flags on a veteran's grave at Memorial Park Cemetery on Friday, May 28, 2021. 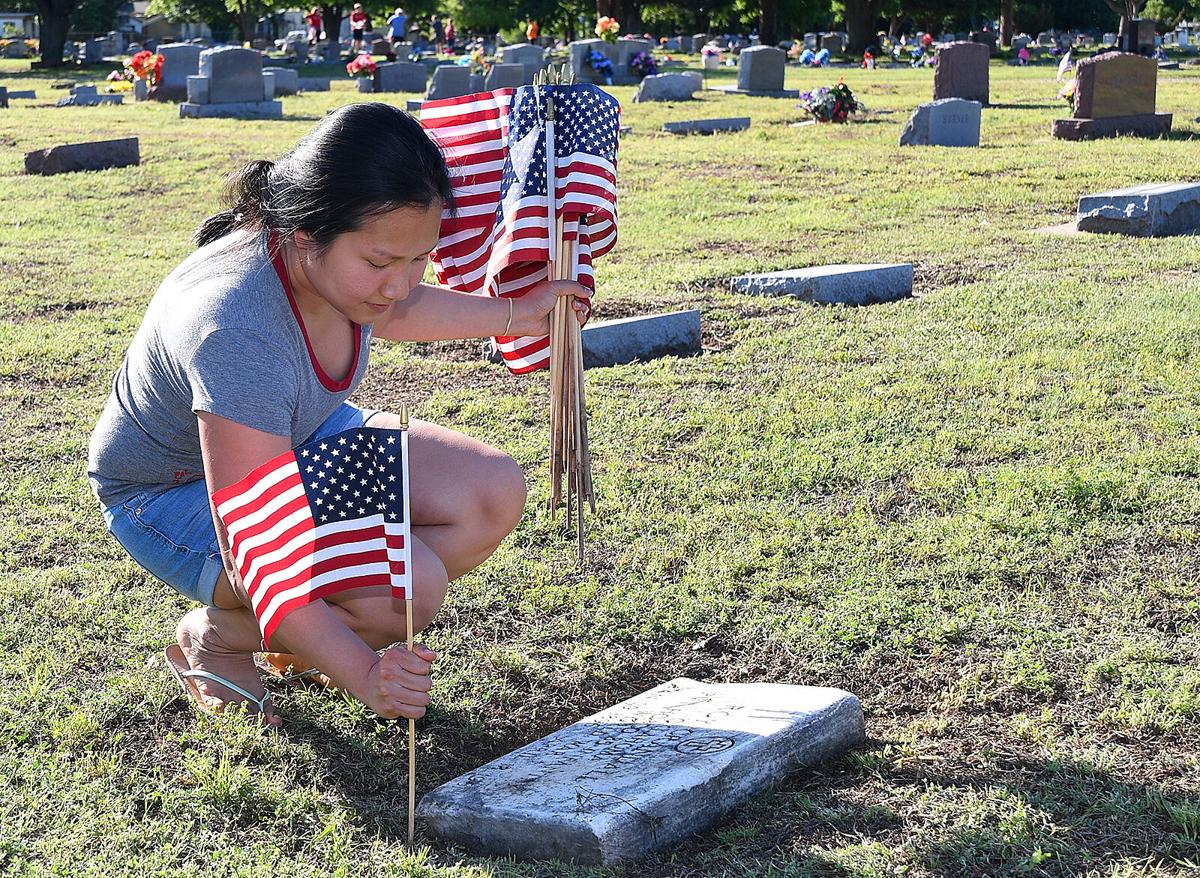 Anh Ison, president of Air Force Sergeants Association, places a flag at the headstone of a veteran at Enid Cemetery on Friday, May 28, 2021. (Billy Hefton / Enid News & Eagle) 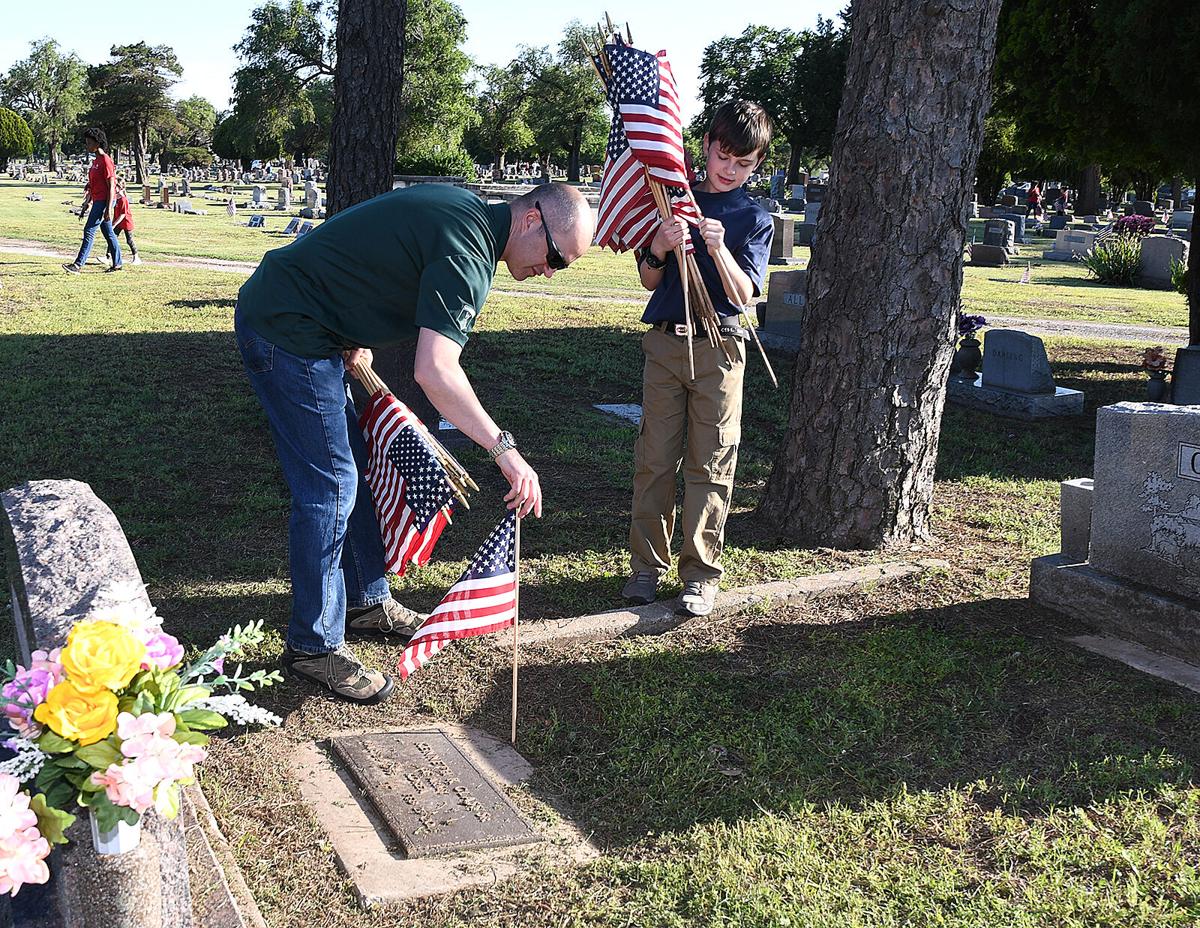 Chad Bridgeford and his son Benjamin place a flag from the Air Force Sergeants Association at the headstone of a veteran at Enid Cemetery on Friday, May 28, 2021. (Billy Hefton / Enid News & Eagle) 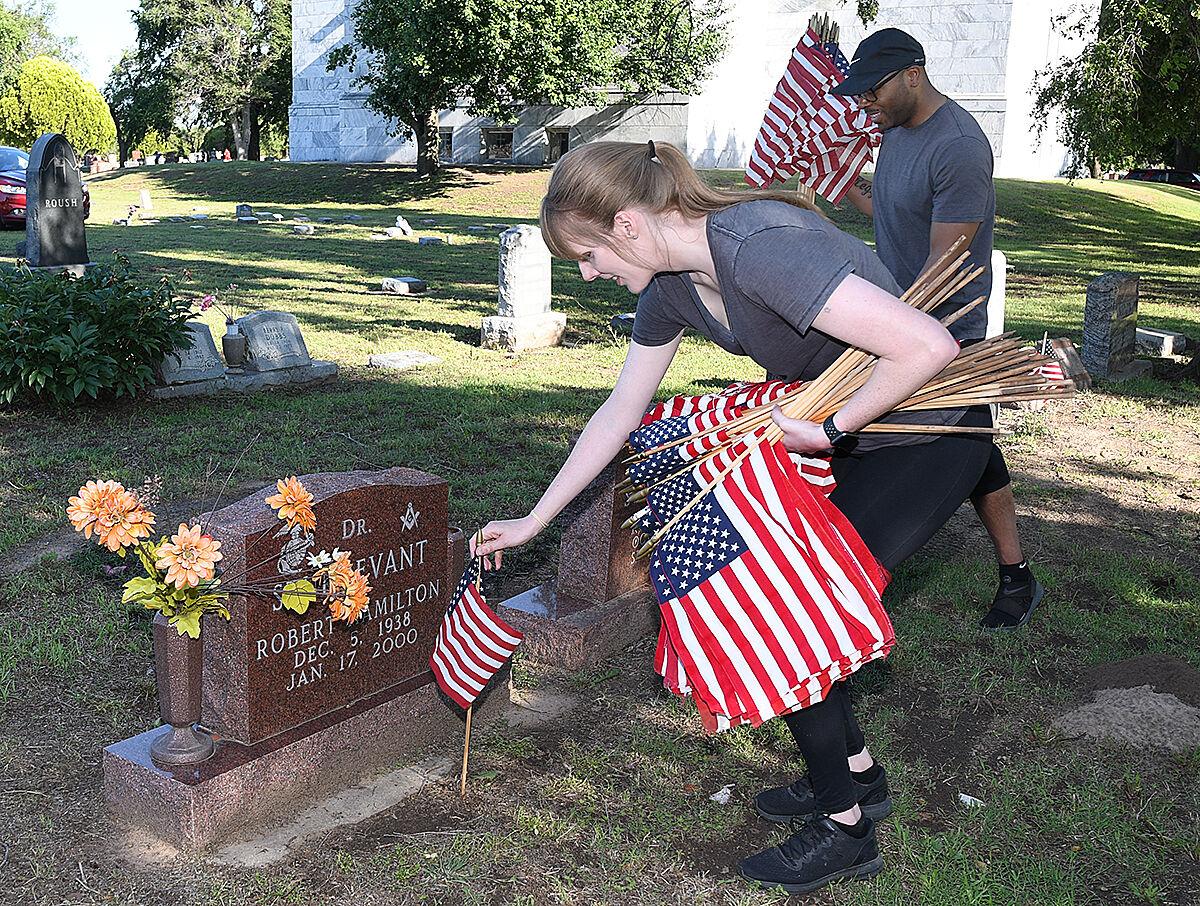 Halie Goicochnea and Charles Edmondson place flags from the Air Force Sergeants Association at the headstones of veterans at Enid Cemetery on Friday, May 28, 2021. (Billy Hefton / Enid News & Eagle) 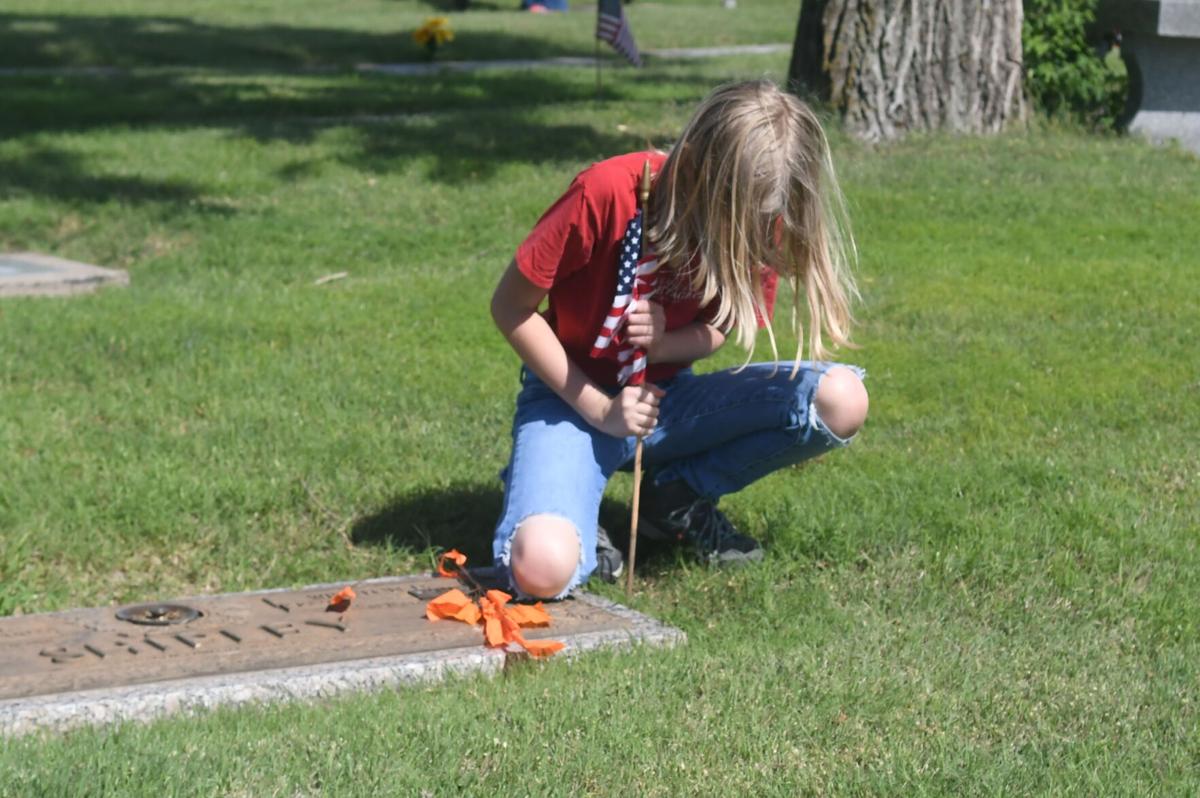 Nine-year-old Nevaeh Phelps, with American Heritage Girls, places an American flag beside the grave of a veteran in Memorial Park Cemetery on Friday, May 28, 2021.

Lloyd Roberts, a Vietnam veteran, and his two grandsons have volunteered to help with flag placement before Memorial Day for several years now to show respect to veterans of the U.S. military.

“When you’ve been there and seen it, the thought never goes away, and you take care of those that laid down their life before you,” Lloyd Roberts said.

His grandsons also know the importance of remembering the fallen soldiers’ sacrifices.

“It’s a great way to show respect toward all these veterans who’ve come before us to help get us to where we’re at today,” Camden Roberts said. “It’s a great country, great state, great town ... Lots of patriotism here in Enid.”

Capt. Anh Ison, president of Air Force Sergeants Association, said a big part of why AFSA does this every year is to honor and remember veterans.

“The veterans — the fallen ones — are the reason why we celebrate Memorial Day, and they’re the reason why we can embrace our freedom and enjoy the life we have,” said Ison, who immigrated to the United States in 2011 from Vietnam with her family and joined the military nearly two years ago.

Another reason is to show families that someone out there still cares, said Staff Sgt. Charles Edmondson.

“We see a lot of family members out here,” he said. “When we were out here last year, they would come out and clean the gravesites, or they’d be laying their flowers ... and seeing us also out here — I think it shows that we actually care.”

Ison said for a few weeks, she thought there would not be enough volunteers, but more than 100 people, including children and adults, volunteered to place the thousands of flags Friday, replacing the marker flags at Memorial Park and searching for veterans on the headstones to place them at Enid Cemetery.

Senior Master Sgt. Steve Conrad, vice president of AFSA, was counting everyone walking up to grab the flag bundles at Memorial Park and was amazed at the “epic” turnout.

“A lot of other organizations and citizens came together to support this, so I think that says something,” Conrad said. “In years past, they’ve had 10, maybe 15, show up, but this by far is the largest group of folks that have come out to support this holiday — this memorialization of the active duty members that have fallen.”

Conrad, who has been in the military for 20 years, brought along his 14-year-old son Gibson, a Star Scout, to give him perspective, as did many other parents and organization leaders.

Jennifer Fletcher, coordinator of American Heritage Girls’ Troop 6800 in Enid, brought about 20 girls out to help place flags, saying it helps them learn more about what it means to serve.

“It helps them understand that these people gave their lives, and they served our country and made a difference,” Fletcher said. “I think this helps them give back to the community.”

Chad Bridgeford and his 10-year-old son Benjamin, who is involved with Trail Life USA, went to both cemeteries to place flags next to veterans’ tombstones for the first time, saying this was the best way to spend their Friday afternoon.

Enid Cemetery has older headstones, and Benjamin Bridgeford said it was interesting to search for veterans who served in the 1800s and even found a veteran from the Spanish-American War.

For the Bridgefords, though, the message was the same in both cemeteries — “thanking and honoring the people that fought for us,” Benjamin Bridgeford said.

“I think it’s important to remember the people that fought for our country throughout history, not just current ones,” Chad Bridgeford said.