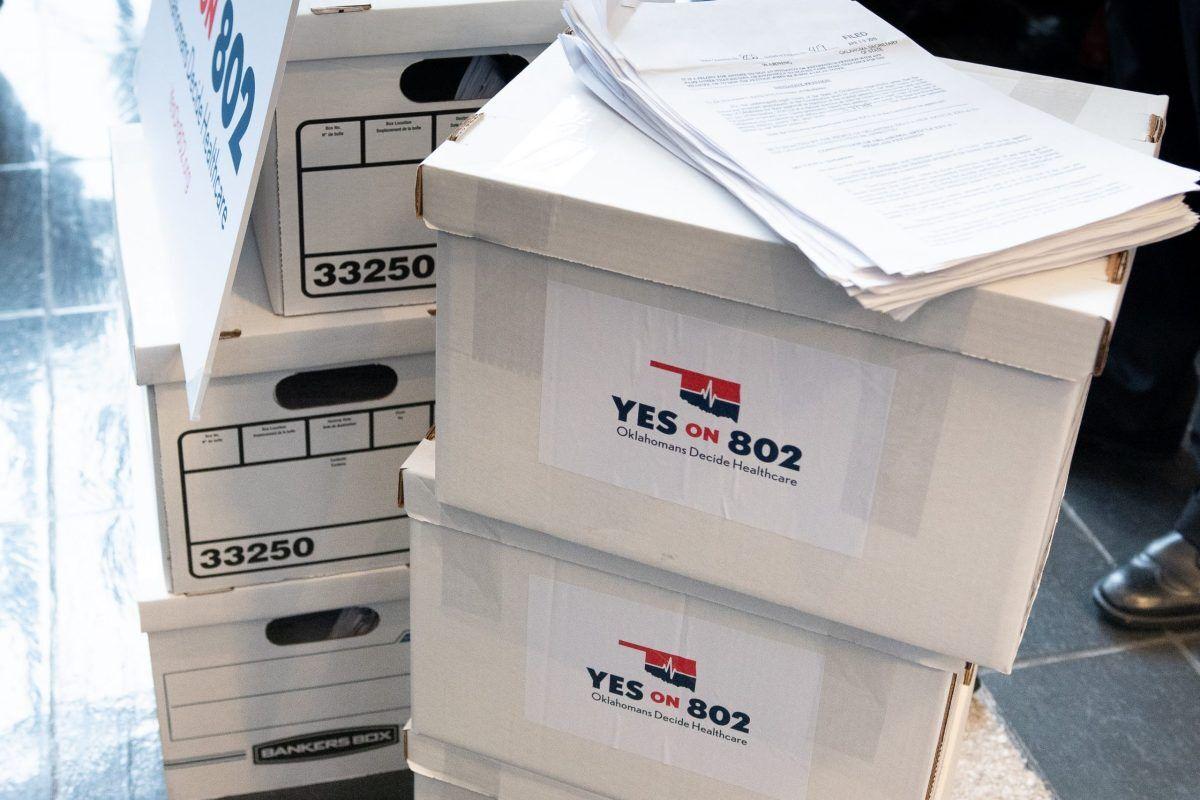 More than 300,000 signatures submitted to the Secretary of State’s Office in support of Medicaid expansion were the fuel for state voter approval of a plan to expand health coverage to an estimated 200,000 Oklahomans. 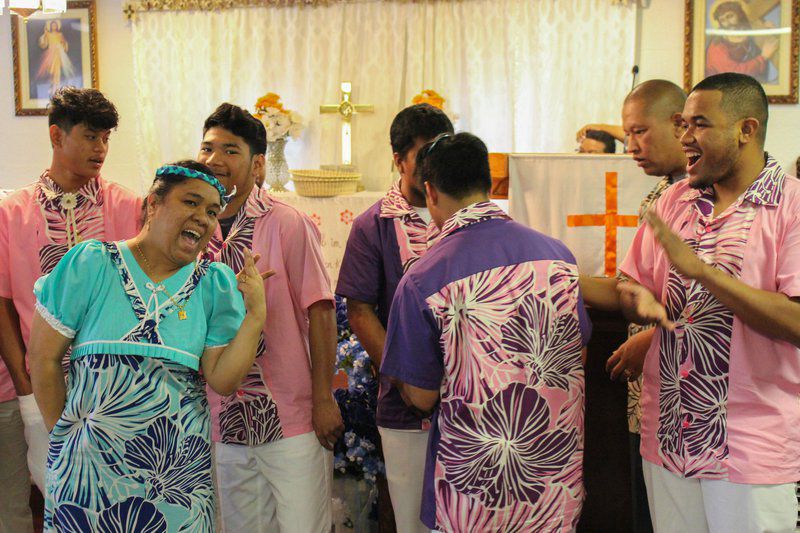 Young men and women stand at the front of the room at Enid Marshallese United Church of Christ dressed in colorful, matching shirts and dresses while singing Marshallese songs and dancing. 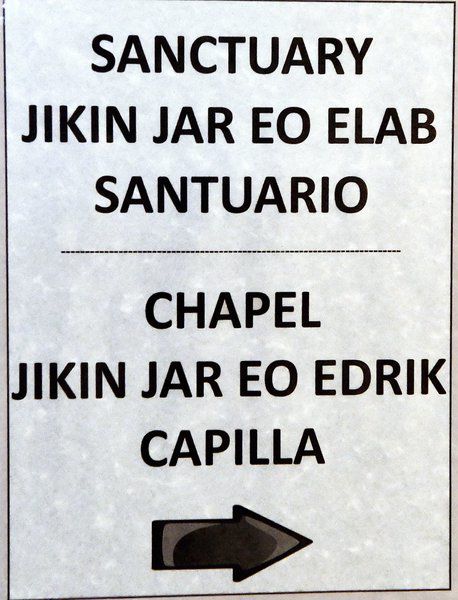 More than 300,000 signatures submitted to the Secretary of State’s Office in support of Medicaid expansion were the fuel for state voter approval of a plan to expand health coverage to an estimated 200,000 Oklahomans.

Young men and women stand at the front of the room at Enid Marshallese United Church of Christ dressed in colorful, matching shirts and dresses while singing Marshallese songs and dancing.

ENID, Okla. — While the U.S. government has expanded its Medicaid benefits to people from Micronesian nations in the Pacific Ocean, Oklahoma has yet to catch up to allow these residents to actually apply before state program expansions begin this summer.

The long-awaited expansion of federal health benefits is being called a “good beginning” for the people in Enid’s Micronesian community.

Initially included as a 1986 deal with governments of Micronesian islands, including the Marshall Islands — called the Compact of Free Association (COFA) — Medicaid coverage was erroneously removed in a 1996 welfare reform bill.

But as part of December’s third CARES Act passage, the federal government authorized reinstating Medicaid coverage effective Dec. 28, 2020, for those eligible among tens of thousands legal non-immigrants from several COFA nations living in the United States.

More than half of the nation's 94,000 estimated COFA citizens are not born in the U.S. or naturalized citizens, but still pay income taxes and other fees in exchange for residence in states including Oklahoma.

Millhen Karben, Enid High School’s liaison to students and parents in the Marshallese community, said he believed the federal Medicaid expansion to be a temporary benefit.

“In my opinion, it’s a temporary thing … because I know the reason I moved (from the Marshall Islands) is I will find a job,” Karben said. “But it’s a good beginning for the Marshallese, especially for those who are old and elderly and those who don’t have any jobs (that have insurance)."

Beginning June 1, those eligible can apply for Medicaid through Oklahoma’s program, SoonerCare, on the HCA’s website, on OKDHSLive.org if 65 or older, or calling the county’s Department of Human Services office when applying for other DHS benefits.

These residents now can possibly receive some of the between $160 million to $200 million of annual state funding that would cover 10% of medical costs, to be met with a 90% match from the federal government. And the most recent federal relief package could add $500 million more to the state’s Medicaid funding over the next two years.

Sen. Roland Pederson, R-Burlington, said Enid's Micronesian Coalition had discussed setting up a community leader volunteer to instruct people for a time and place to get registered after June 1.

Before June 1, the only way to enroll in SoonerCare is calling DHS directly, while neither the online SoonerCare portal nor its phone system includes a Marshallese language option.

On July 1, SoonerCare eligibility will be expanded for low-income adults aged 19-64, with an estimated annual income of $17,796 for an individual or $36,588 for a family of four.

“At least what we understood was that for the Marshallese, they were having some challenges with interpreters when they called, and they were not included on the Health Care Authority’s website,” Schiedel said.

Schiedel also said the required documents need to be translated to the language.

Enid resident Justin Simmons said his wife, who is Marshallese, would have difficulty applying online because her legal status is not yet available on the SoonerCare website.

Unlike the federal Medicaid website, the state's SoonerCare website isn't set up yet to accept the legal status of COFA citizens who don't have a green card, but do have an I-94, Simmons said.

To qualify for Medicaid, immigrants in Oklahoma must prove status with a legal permanent resident card, I-94 or other immigrant registration card, passport or T visa.

Pederson said he would be working with the state's Health Care Authority, which handles the state's Medicaid program, to improve enrollment concerns.

“They were really dealt a bad hand a long time ago, and we really didn’t take care of them,” he said of the Marshallese and other Micronesian people. “And that’s one of the things we as the government should do.”

Krista Roberts, CEO of St. Mary’s Regional Medical Center, said the hospital would like to see a higher access to outpatient health care through coverage such as Medicaid and the Affordable Care Act.

“Ultimately, we would like to reduce emergency room visits and reduce ‘crisis care’ occurrences that can be avoided with care that is appropriately managed on an outpatient basis,” Roberts said in an email Tuesday.

The Rural Health Project's Health Outreach to Marshallese in Enid (HOME) Network also works to provide culturally competent patient navigation services to the Marshallese people who have a lack of health care knowledge, a lack of awareness of community resources, cultural barriers and access barriers, including a lack of insurance and transportation.

Neither the RHP's executive director or its HOME community health worker returned requests for comment.

Terry Mote, a Marshallese resident who works as public information officer with Garfield County Health Department, organized the coalition in 2017 to better address the needs of the community.

While Mote was also unable to be reached this week, his Health Department supervisor, Maggie Jackson, said a challenge for the Marshallese and the Micronesian communities in the county has been access to quality medical care.

This would be improved once Micronesians have health insurance, whether through Medicaid or the Affordable Care Act marketplace, Jackson said.

“We want to highlight the need for support for the Micronesian community with more health resources without furthering stigma against them,” she said. “There are challenges with the resources they don’t have that other people in Garfield County do have access to, including health insurance."

The United States recognized the Marshall Islands as a constitutional republic in 1979, while Marshallese citizens began arriving in Enid a decade before through Phillips University outreach efforts.

In Garfield County, between 2,200 to 2,400 native Hawaiians or Pacific Islanders live in the 73701 ZIP code, according to 2019 estimates from the U.S. Census — though the Government Accountability Office has long considered these figures underreported. A previous story from the News & Eagle reported 2,800 Marshallese specifically living in Enid.

While the state Department of Health also includes Asians in its racial demographic, 6.2% of COVID-19 cases have been reported in Garfield County’s Pacific Islander/Asian population — which comes to 479 people of either Pacific Islander or Asian descent.

While nine PI/Asian people in Garfield County have died from the virus, Jackson said 64 more people were reported as unknown race/ethnicity, likely because of unwillingness to report.

“(Nationwide) we just observe disparities between racial groups for many different health outcomes,” she said, including COVID and other communicable diseases. “And we want to understand why those groups might be disproportionately affected.”

Around 2,500 people from the Micronesian nations, including the Marshall Islands, are estimated to live in all of Oklahoma, according to GAO, which says the state has the sixth-highest migrant population in the continental U.S.

That figure has more than doubled from population estimates between 2005 and 2009 of around 1,200 people.

This story has been updated to show that St. Mary's CEO Krista Roberts is not a member of the Micronesian Coalition, but of the group that, along with the coalition, applied for a grant awarded to the Rural Health Project.