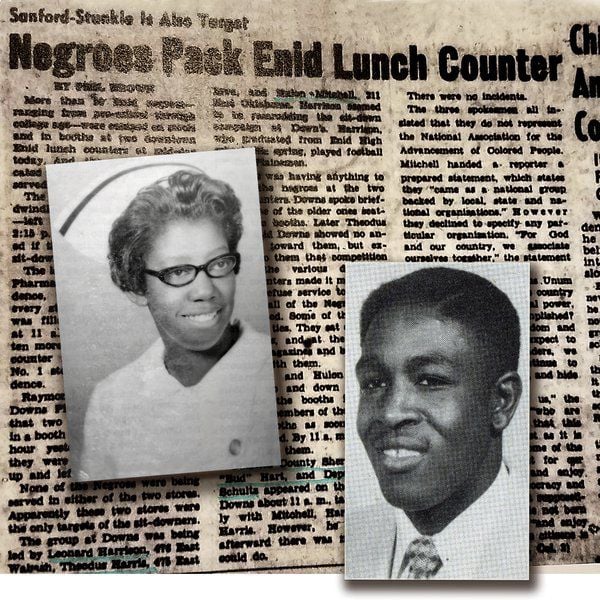 Photos of Maudell Lawrence Graves, left, pictured here in 1968, and Bishop Phillip Porter Jr., right, pictured here as a student at Phillips University, are superimposed on a copy of the Enid Daily Eagle from Aug. 27, 1958, reporting on the lunch counter sit-ins in downtown Enid on that date, which Graves and Porter helped orchestrate, that led to desegregation in the city's restaurants. (News & Eagle graphic by Bonnie Vculek / Graves photo provided / Porter photo courtesy of Cherokee Strip Regional Heritage Center) 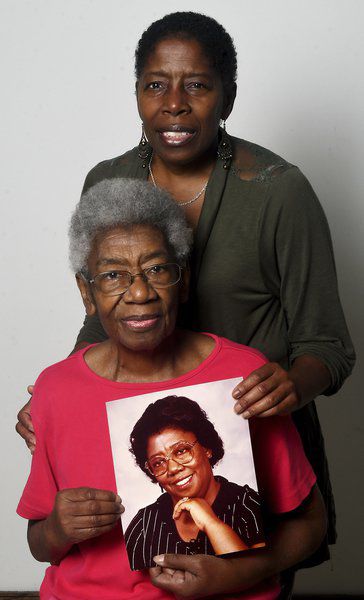 Photos of Maudell Lawrence Graves, left, pictured here in 1968, and Bishop Phillip Porter Jr., right, pictured here as a student at Phillips University, are superimposed on a copy of the Enid Daily Eagle from Aug. 27, 1958, reporting on the lunch counter sit-ins in downtown Enid on that date, which Graves and Porter helped orchestrate, that led to desegregation in the city's restaurants. (News & Eagle graphic by Bonnie Vculek / Graves photo provided / Porter photo courtesy of Cherokee Strip Regional Heritage Center)

The movement came after several years of smaller protests in Enid, and eight days after Clara Luper organized sit-ins in Oklahoma City.

Luper, an advisor to the National Association for the Advancement of Colored People (NAACP) Youth Council, taught students how to lead sit-ins in several other cities, including Enid.

Maudell Lawrence Graves, then president of Enid's chapter of the NAACP, worked with Luper and other civil rights leaders to organize the movement in Enid.

Sixty years ago tomorrow, a group of African-American students led sit-in protests at downtown Enid lunch counters, following in the footsteps of earlier protests led by Clara Luper in Oklahoma City, and put in motion events that would lead to the integration of Enid's restaurants.

Graves died in 2010, but her sister, the Rev. Bonell Fields, remembers the role Graves played in organizing the Enid civil rights movement.

"Whenever there was a problem in Enid involving integration or prejudice, she would always call the president of the state NAACP," Fields said, "and they would come over and meet with the mayor and other city officials to try to iron out the problem before it increased in intensity."

Graves worked with students at Phillips University and Booker T. Washington High School to organize several small marches and sit-ins leading up to 1958.

The protests were nonviolent, but Fields said they still stirred up strong feelings in town. Fields was still a teenager at the time, and said she felt both proud of and afraid for her older sister.

But, fear wasn't a deterrent to her sister, Fields said, even though Graves was "barely 5 feet tall" and was "slender, soft-spoken, but stubborn."

"Here was this petite woman going out here and facing all these crowds," Fields said, "but to look at her you wouldn't think this is a person who would lead these things."

Fields said the more racial barriers her sister faced, the more determined she was to overcome them.

"She was determined, and not just in NAACP but in her everyday life," Fields said. "If there was something she wanted to do, she would work to do that, and if you put an obstacle in her way, it was like, 'Well, that's just there for me to show you I can climb over it.'"

When local students decided on a sit-in for Aug. 27, 1958, they set their sights on two downtown lunch counters: Downs Pharmacy at 120 N. Independence and Sanford-Stunkle Drug Co. at 100 N. Independence.

Jess Stunkle, owner of five Sanford-Stunkle locations in Enid, told the Enid Morning News on Aug. 28, 1958, his downtown location had previously served black customers at the lunch counter, "but their number kept growing and several white patrons complained about the presence of the Negroes, so we quit serving them."

F. W. Woolworth, then at 112 W. Randolph, had been the site of earlier, smaller sit-ins and had since opened its lunch counter to customers of all races.

Smaller sit-ins in the past had not yielded violent opposition, but also hadn't yielded results. When it came time to stage the much larger sit-in, following Luper's model, Fields said her mother was worried for her sister, and for all the youth who would participate.

"I think she worried about any child out there that might be harmed," Fields said, "because that's just how Mother was."

Mid-morning on Aug. 27, 1958, a group of 50-60 black students arrived at the drugstores, filling booths and stools, with others waiting outside to fill seats as white customers left.

That afternoon's Enid Daily Eagle reported the scene: "More than 50 Enid negroes — ranging from pre-school through college age — were camped on stools and in booths at two downtown Enid lunch counters at mid-day today. And, the spokesman indicated they would stay until they're served."

Counter staff at both locations refused to serve the students, but no violence occurred from either side.

"Nearly all of the Negroes were well dressed," the Eagle reported. "Some of them wore coats and ties. They sat quietly in the booths, and at the counter, reading magazines and books they brought with them."

As for the white staff, and patrons, the Eagle reported "No one was having anything to say to the negroes at the two lunch counters."

Bishop Phillip Porter Jr., a Colorado pastor who grew up in Enid and was a student at Phillips at the time, helped organize and participated in the sit-ins. He said he and his fellow protesters were excited that day, but not afraid.

"As I look back I cannot think of a single moment when we had fear grip us," Porter said. "We didn't think about going to jail or getting beat by the police or having dogs on us or anything like that. We just thought we would go in there and try to get served."

Garfield County Sheriff Mason "Bud" Hart and a deputy responded to the Downs lunch counter at about 11 a.m. and spoke with the owner and some of the organizers, but "explained afterward there was nothing he could do," as "there were no incidents," the Eagle reported.

By mid-afternoon, the sit-in appeared to be in stalemate. White customers and staff made no effort to remove the black students, and the students undertook no action other than sitting in the seats, waiting to be served and being ignored.

Newspaper reports from that day indicate the lunch counter owners weren't sure how to address the situation without losing business. With the black students present, they were losing white business. If they integrated before the other restaurants in town, they risked losing even more white business.

Theodus Harris, one of the organizers at the Downs lunch counter, told the Eagle "Downs showed no antagonism toward them, but explained to them that competition among the various downtown lunch counters made it mandatory that he refuse to serve them."

Crawford Funk, lunch counter operator at Sanford-Stunkle, told the Eagle "several customers approached him on the street, after seeing Negroes eating at the counter, and told him they would patronize his place of business again 'as soon as you quit letting those Negroes eat in there.'"

To break the stalemate, a committee of 25 Enid restaurant owners promised to discuss integrating their establishments, and sit-in organizers agreed to lead no more protests, pending the restaurant owners' decision, according to an article in the spring 2018 edition of "The Chronicles of Oklahoma" by Cherokee Strip Regional Heritage Center archivist Aaron Preston.

Initially the restaurant owners' meetings were closed to African-Americans. Newspaper reports revealed some of the fears the white business owners had in those first meetings.

Lloyd Hardin, owner of Hardin's, located south of Enid on U.S. 81, objected to the presence of African-Americans in the restaurants, and blamed newspaper coverage for "increasing both sympathy for, and hostility toward the Negroes."

Richard Moler, owner of Moler's Drug Store, was more blunt in his complaints, and where he feared the lunch counter sit-ins might lead.

"This is the beginning of a trend," Moler is reported as saying in a public meeting of cafe owners. "They will be buying homes in white neighborhoods next. We have to stop it now."

Despite those fears, the restaurant committee appointed a delegation of five owners to meet with three of the sit-in organizers: Leonard Harrison, Theodus Harris and Hulon Mitchell.

After meeting on Sept. 4, 1958, to avoid further loss of business, the restaurant owners' group agreed to all integrate their businesses at the same time.

Ray Downs, whose father owned Downs Pharmacy at the time, told the News & Eagle in 2012 the restaurant owners “had a meeting for a couple of days and decided ‘Let’s serve them.’”

Fields said her sister, Maudell Graves, was happy the protests ended with integration of the cafes, and wanted there to be harmony between the restaurant owners and their new customers.

"She was happy about it, and she was glad they had succeeded,” Fields said, "but it wasn't like, 'If I win I'm going to rub your nose in it.'"

Sixty years later, Fields said race relations in America are “a lot better than what it was,” but hatred and fear persist. She hopes time will continue to heal the old wounds of segregation and prejudice.

"I think more generations are going to have to fade out, or die out, because I think the younger generation coming up has a different attitude,” Fields said, "and I think the rise of that new generation is going to do a lot to solve that discrimination."

Graves’ daughter, Rae Graves, said she and her twin brother, Jay, are blessed to know the role their mother played in Enid’s civil rights movement.

Audrey Finley-Ramey, whose parents, Barbara and Robert Finley, took part in Enid sit-ins, said passage of civil rights lessons from generation to generation is needed to overcome the vestiges of America’s racially divided past.

“Racism would die if it’s not taught,” Finley-Ramey said.