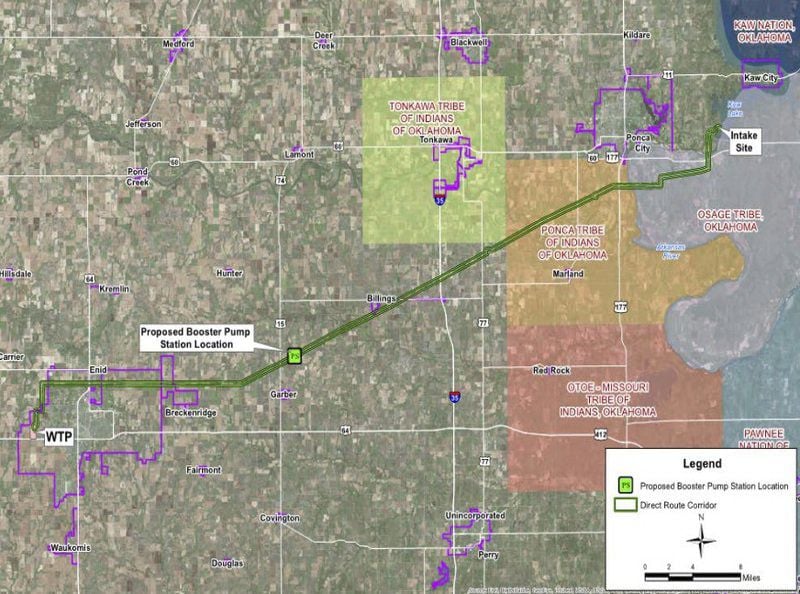 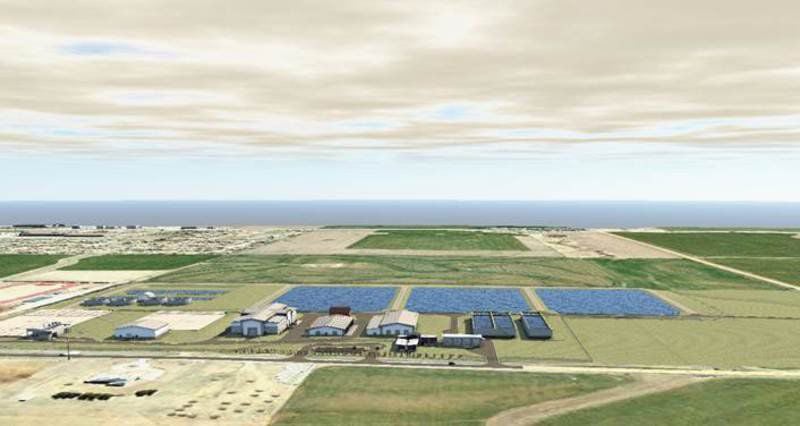 This rendering shows a proposed water treatment plant for Enid that is part of the Kaw Lake water pipeline project. The proposed location is on Chestnut, west of Oklahoma Bible Academy.

This rendering shows a proposed water treatment plant for Enid that is part of the Kaw Lake water pipeline project. The proposed location is on Chestnut, west of Oklahoma Bible Academy.

ENID, Okla. — City of Enid officials are continuing to work toward a phased-in approach for the Kaw Lake water pipeline project.

During an Enid City Commission meeting on Feb. 6, the total cost opinion for the project was $470 million, up from a previous $451 million cost opinion. Plans have not changed substantially since that meeting, City Manager Jerald Gilbert said.

“I know we’re working on the phased-in approach, and what it will cost and how much water that will bring. We’re still working on those numbers,” he said.

An update will be presented to the city commission during a 5 p.m. study session on Tuesday.

“I’m confident that we’re going to be able to build the pipeline and build the other infrastructure associated and needed for a reduced cost from what we had reported at the last meeting,” Gilbert said. “We will likely continue to do monthly updates on the Kaw Lake project until we conclude with a feasible plan.”

A 90-day period to complete a feasible plan will come to an end at the end of April, he said.

“I would say by the end of April, early May, we should have the best information we’re going to have, probably at the end of phase two, to present to the commission for their consideration,” Gilbert said.

City officials are focused on not only coming up with an affordable engineering cost to get water to Enid, but also ensuring the city is able to pay for it over a period of likely 30 years through financing, he said.

The city also will need to have funding to address other infrastructure needs in the community, such as streets, parks and the water well field, Gilbert said.

“That’s part of the challenge that we’re working on over these next 90 days. I’m confident we’re going to come up with a plan,” he said, adding Kaw Lake is the best water option. “No question about it, in my mind.”

The well fields continue to be a declining resource, he noted.

“It’s in the city’s best interest to diversify,” Gilbert said. “The path that past commissions have set us on, we’re certainly going to do our very best to fulfill with that phased-in, feasible, affordable plan that we hope to present sometime in April or May.”

“I don’t think anybody at this point can contest that we need the water. All you have to do is look at the trends. Even if we don’t grow at all, from this point forward, it’s still a resource that there’s a cap on it. There’s only so much that we have, so if we don’t continue to explore new ways in order to be able to keep that resource going, we’re going to be in trouble.”

The project is progressing, Waddell said.

‘We would be wrong if we didn’t take our time’

Waddell said he has heard people complain about how long the process has taken.

“We would be wrong if we didn’t take our time and take a good, hard look at this and make sure that we take all the precautionary steps and look at all different avenues before we take a step like this. I mean, this is hundreds of millions of dollars that we’re going to be paying into for several years, so we need to take our time and make sure we do what’s needed before we take any affirmative steps,” he said.

There will be a lot of information coming out over the next several months, and Waddell asked that people pay attention.

If the project remains on schedule, construction could be starting as early as two years or less from now, Gilbert said. The bulk of construction will probably occur in 2020 and 2021 and be completed in 2022. That’s the original 7-year timeline presented.

There has been contact with the Osage, Tonkawa and Ponca tribes, Gilbert said.

“Anywhere where the pipeline route crosses tribal land, we visited with the tribe that claims that area,” he said. “We’re talking about two things, at least two things, which are whatever permit or process is required to get an easement to bury the pipeline across their property, and then also checking to see with that tribe if they have future water needs that they may want some Kaw Lake water for. We’re always looking for partners in the project, and customers.”

City officials also visited with some tribes about historical, archeological environmentally sensitive areas and tried to avoid those on the pipeline route, Gilbert said.

The city is not talking to tribe officials about water rights or permits from Kaw Lake, he said.

“We go through (Oklahoma Water Resources Board) and the Corps of Engineers for those things,” Gilbert said. “We’re also working with the state to work with the tribes on if they do have water rights issues because we know that’s an issue between the state and the tribes. Our focus has been on permits, and looking at purchasing easements and being culturally sensitive for environmental, or historical, or archeological areas that we want to avoid disturbing. That has been what we’ve talked to the tribes about.”

In phase two, the city identified a pipeline route, he said.

“It’s the next phase, really, that we’ll be looking at land acquisition. So, we’ll step up our efforts and we’ll find out at that time, I guess, if we’re going to have any significant impediments,” Gilbert said. “I would anticipate there will be always be some challenges at various places, just based on we have to acquire the right to cross peoples’ property. We’re going to do everything we can to try and do that, and if we have challenges with that, then we’ll probably try to work through those challenges. However, those are challenges that will fall in the next phase — phase three.”

“Our intent is to make the best deals we can,” Gilbert said. “We understand it’s a sensitive thing. We respect property rights, and it is a big deal for the city of Enid and the communities that we also sell water to, and, really, the region. We’re looking to make this a win-win for us and for the landowners along the route.”

Chamber focuses on regulation of the ‘business climate’ of Enid