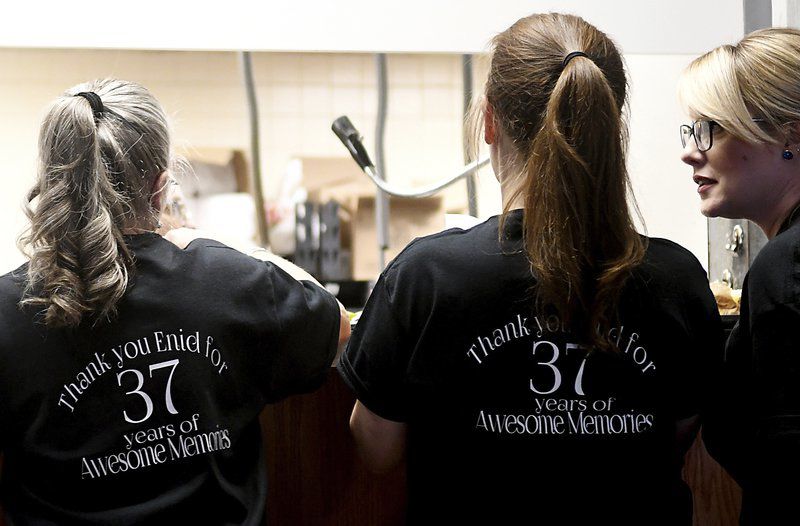 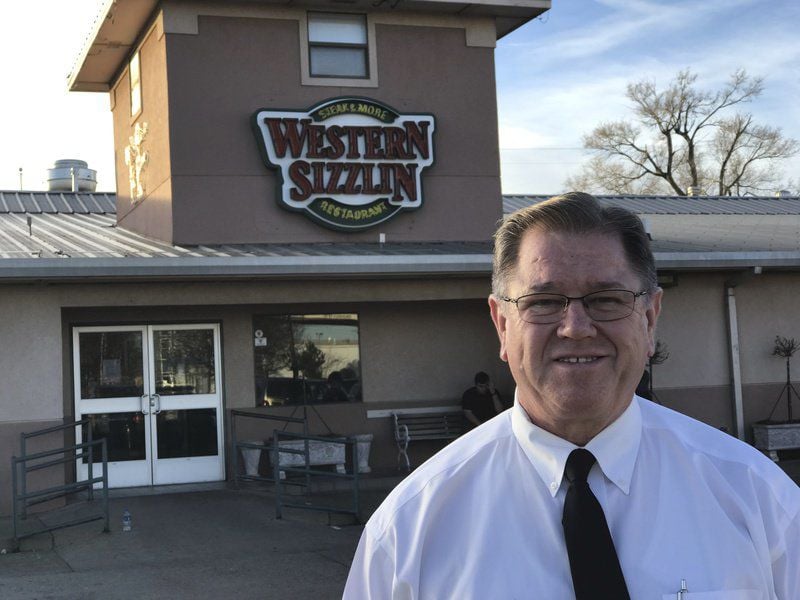 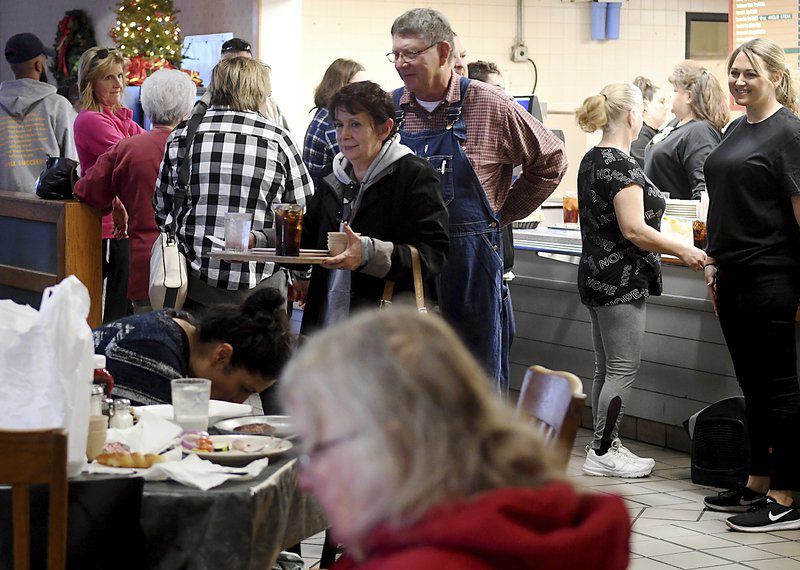 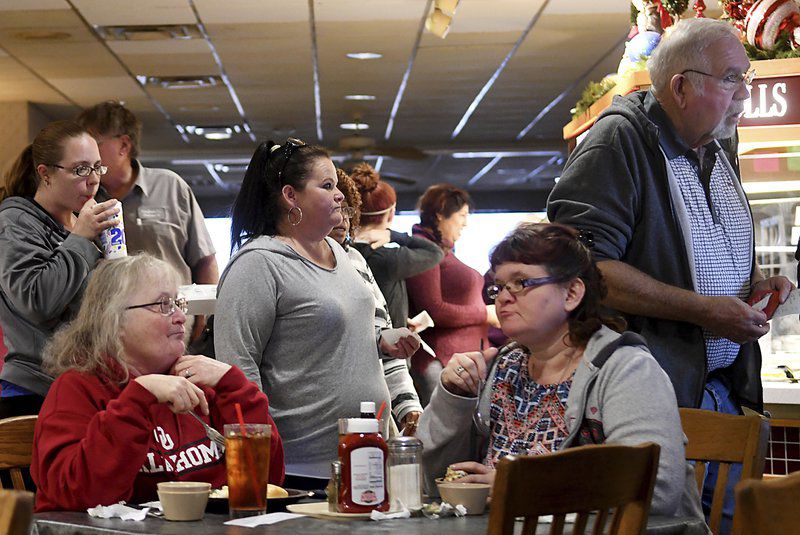 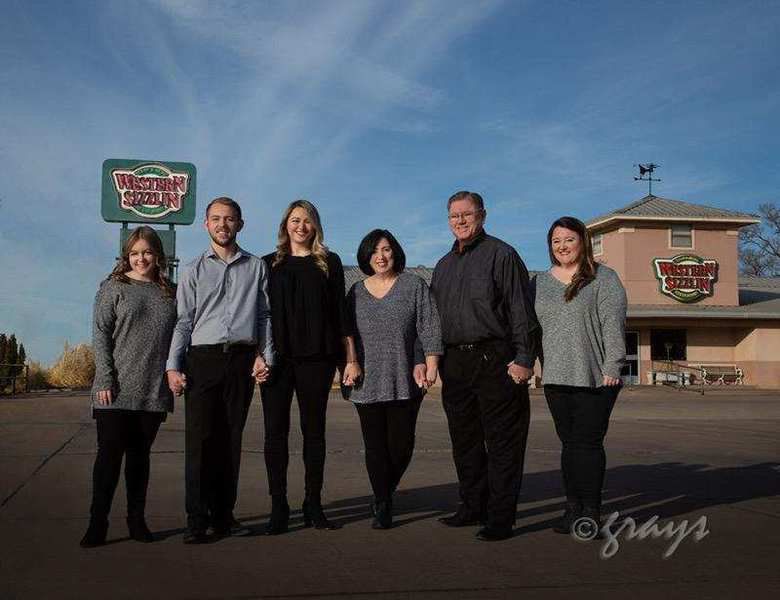 ENID, Okla. — Western Sizzlin celebrated its final day of business Friday much like the last week or two — with lines stretching out the door and dozens of regular customers, past employees and others paying their final respects to owner Steve Harris and his family.

"The last week has been phenomenal. I told my employees I expected business to pick up a little bit, but it has really doubled. It’s been really remarkable and pretty humbling really to see the outpouring of customers and their comments," Harris said.

Harris is retiring and Western Sizzlin is closed after 37 years following Friday's final day of business. Swadley's World Famous Bar-B-Q will reopen the building after renovation in spring. Western Sizzlin opened its doors in Enid on Dec. 15, 1981.

Generations of families have eaten in his restaurant, and Harris recently has been reflecting on the last 37 years. One customer, he said, began coming in with her grandmother when she was a child and now has been bringing in her own daughter.

"So many memories. That’s what we hear from a lot of our customers. It’s being here 37 years, is a lot of the memories they had from their families and we’ve got like four generations eating with us. That’s really the common thread in a lot of the comments is they’ve kind of grown up here," Harris said.

Regular customers and past employees alike have been coming in droves during the restaurant's final days. Harris said a number of employees who met each other at work later became married, what he dubs a "Sizzlin Romance."

"The sales have been nice, it’s always nice to have good sales. But the connections with our customers, the personal relationships that we’ve developed are more important and that’s been very evident," Harris said. "It’s meant a lot just getting to relive some of the family memories of them coming in."

One woman who came in to eat Friday evening said she'd been eating at Western Sizzlin ever since it opened 37 years ago.

"It’s always been good, I have never had to send anything back ever and it was consistent. You knew when you ordered something it was going to be the same every time you came, always good. If you left here hungry it was your own fault. You (Harris) made it so ordinary people could eat out ... we're going to miss you," said Rhonda Craig.

"It’s like family here and we just feel like we’re losing a staple in this town. Steve and all of his family have always been so great, so mixed emotions. We’re happy for the family that they get to do something different, but we’re going to be sad to see them go," Browne said. "I think he’s had a huge impact. He knows pretty much everyone that comes in here by name and face, and they’ve always just welcomed everybody and like I said, it’s not just a restaurant, it feels like home to some people."

Harris began working for Western Sizzlin in 1977 in Arkansas as an assistant manager before managing another location in Missouri in 1979. Dec. 15, 1981, Harris opened Enid's location. He joined Emmanuel Baptist Church and later met his wife in Enid. They have three children.

What Harris wasn't prepared for during the restaurant's final days was what he's said has been a massive outpouring of love and affection. He's going to miss his customers and his employees, who he said are the best around.

All in all, it's been an emotional final week for Harris, but he wouldn't trade the last 37 years for anything.

"We’ve shed a lot of tears for the last week, crying with the employees, crying with customers," Harris said. "Just sometimes when you’re saying goodbye you’re just talking about things, the emotions just hit you, and so that’s kind of how it’s going."

TONKAWA — Celebration of Life Services for Les Grimm, 72, will be Saturday, June 19, 2021, at 1:00 p.m. in Anderson-Burris Funeral Home Chapel. Private family burial will be at a later date in Lamont Cemetery. www.andersonburris.com.

ENID — Celebration of Life for Terry Gene Williams, II, 38, Enid, is pending under the direction of Anderson-Burris Funeral Home & Crematory. Terry was born September 30, 1982, and passed away June 13, 2021. www.andersonburris.com

ALEXANDRIA — A Memorial Service for Thelma Lois Webster, 91, will be held at 1:30 p.m. on Wednesday, June 16, 2021, in the Stittsworth Memory Chapel. Remembrances may be shared online at www.stittsworthfuneralservices.com.