ENID, Okla. — Oklahomans across the state will head to the polls Tuesday to vote in a variety of local, state and national races.

The biggest issue on the primary election ballot is State Question 802, which if approved would expand Medicaid coverage in the state. All voters, Republican, Democrat and independent, will be able to vote on the state question.

Click for CDC information and sample ballots for Tuesday's election 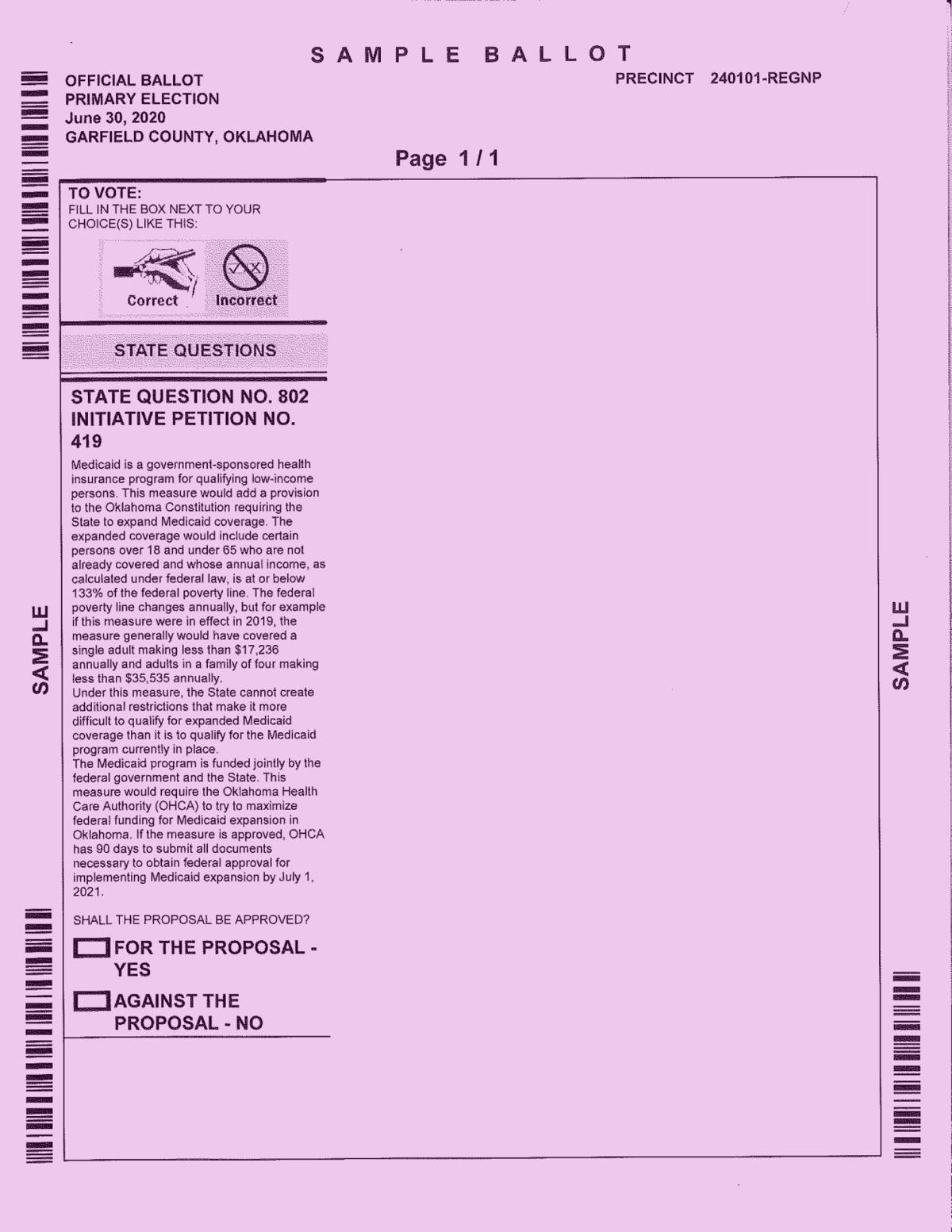 Voters in Garfield County will have several other decisions to make, depending on what party they belong to and where they live.

All Republicans in the county will vote in primaries for:

In the state Senate District 19 race, the winner of the GOP primary will take the seat since no Democrats filed for the November general election. In the sheriff’s race, the candidate who receives a majority of the vote will become sheriff since no Democrats filed. However, if no candidate receives a majority, Republican voters will return to the polls Aug. 25 for a runoff between the top two vote-getters.

Republicans living in state House District 40, which includes much of Enid and other parts of Garfield County, will decide between incumbent Rep. Chad Caldwell and Taylor Venus. The winner will gain the seat since no Democrats filed for office.

Democrats will get to decide their nominee for U.S. Senate between Elysabeth Britt, Abby Broyles, Sheila Bilyeu and R.O. Cassity Jr. Voters registered as independent also will be able to vote in the Democrat primary. Oklahoma is a closed primary state; however, the Democratic Party opened its primaries to independents for 2020 and 2021.

SQ 802 has proven to be the most controversial issue facing voters Tuesday.

According to information provided by Oklahoma Press Association, if SQ 802 is approved Medicaid coverage would be expanded to 200,000 more qualifying Oklahomans age 18 to 65 whose annual income is at or below 133% of the federal poverty line.

Medicaid expansion was authorized in the Affordable Care Act of 2014, but Oklahoma is one of 14 states that have not expanded coverage. The federal government currently pays 90% of the expanded plan’s cost and the state must fund the other 10%.

According to OPA, the constitutional amendment in SQ 802 would prevent the state from creating additional restrictions — such as work, school or community service — that make it more difficult for people to qualify.

Supporters believe approval will help financially support rural health care providers and keep struggling hospitals open, according to OPA. They also argue that by not accepting Medicaid expansion dollars, Oklahomans will continue to subsidize health care for low-income residents in other states through their federal tax payments.

Opponents fear expanding health insurance coverage without a dedicated revenue stream could reduce funding for other state services such as education, corrections or public safety. There also is concern that should the federal government’s share be reduced the state would be expected to pay more. Some possible sources for the state’s share are a provider fee increase on hospitals, tapping into the tobacco settlement fund revenue or general revenues.

“We clearly cannot provide masks for the entire voting public,” Frisbie said, “but we are following a strict infection protection protocol for every precinct. With that in mind, your poll workers will be using masks, all surfaces and pens will be disinfected. Therefore, I strongly urge all voters to wear masks for their safety and the safety of their fellow voters.”

One precinct change is in effect for this election only. Voters in Precinct 110, who normally vote at Enid Health Center, will vote at Champion Park gym, 740 N. 10th. That also is the location for Precinct 103.