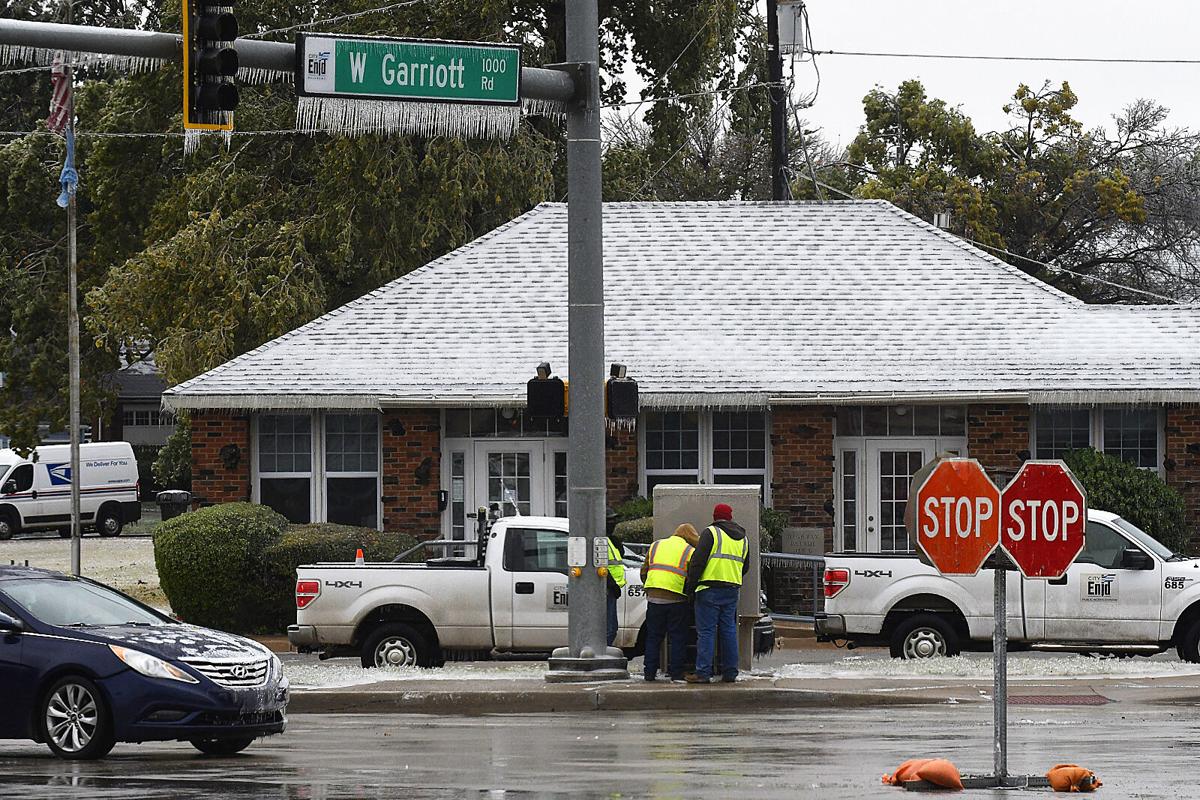 City crews work to restore the traffic signals at the intersection of Garriott and Van Buren Tuesday, October 27, 2020. 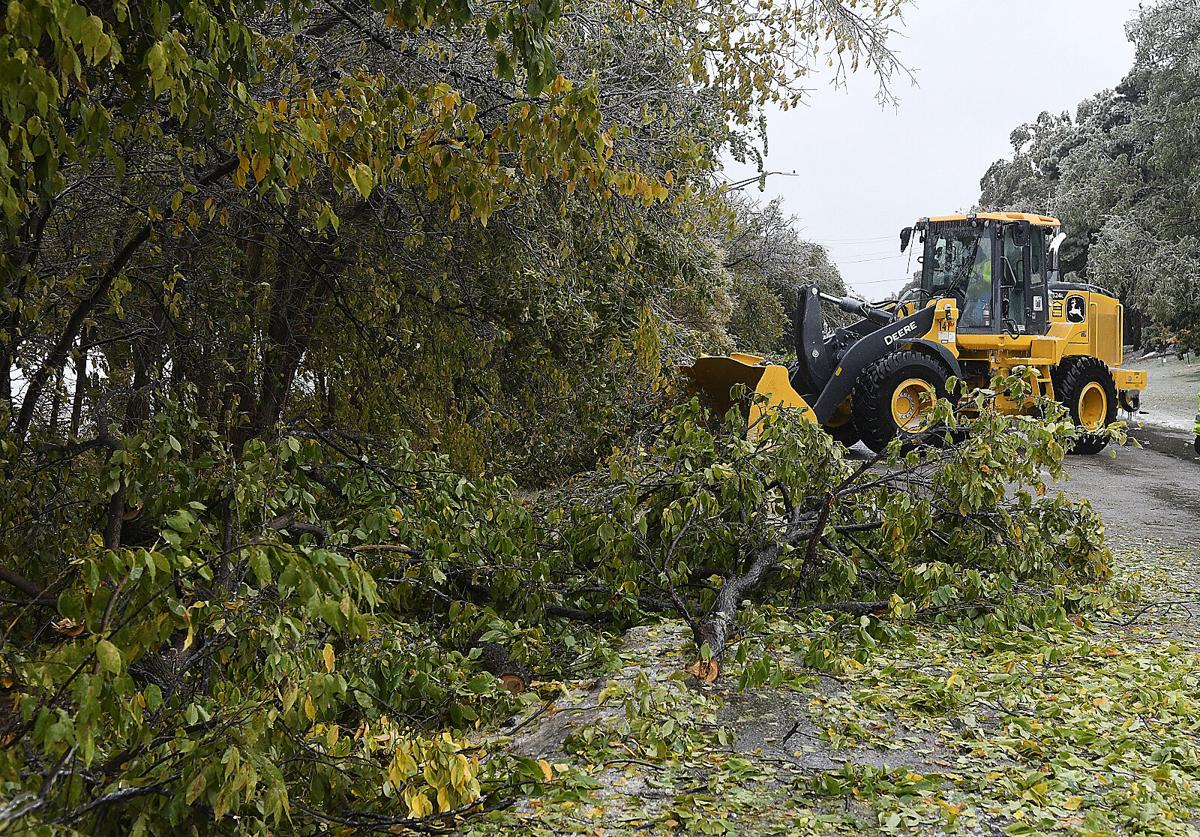 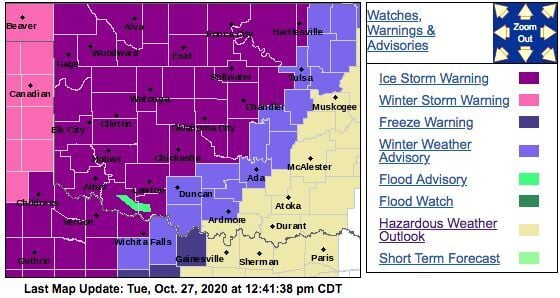 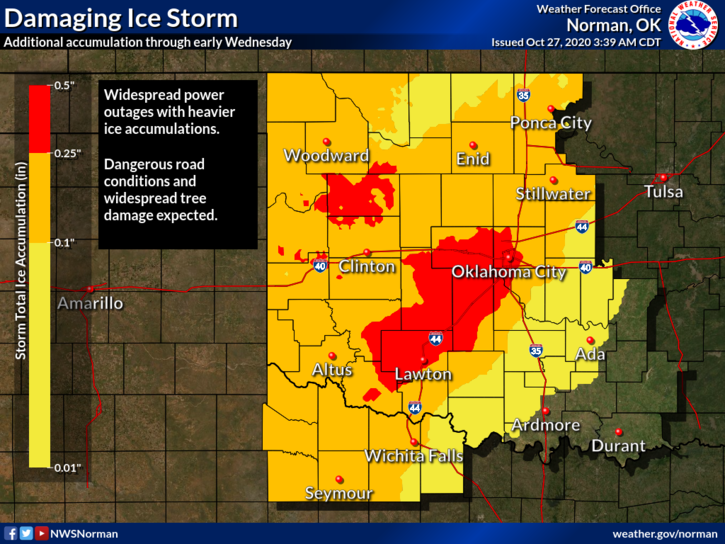 City crews work to restore the traffic signals at the intersection of Garriott and Van Buren Tuesday, October 27, 2020.

A strong winter storm that moved into Oklahoma on Monday continued to wreak havoc across the state Tuesday, leaving nearly a quarter million people without electricity, and causing a fatal accident in Major County.

Dennis Smith III, 28, of Enid, was pronounced dead at Integris Bass Baptist Health Center of injuries suffered in the accident, according to an Oklahoma Highway Patrol report.

The accident happened at 6:55 a.m. Tuesday on Oklahoma 58 about 2.4 miles north of Ringwood.

According to the report, Smith was a passenger in a 2008 Toyota Scion driven by Clayton Jump, 26, of Enid. They were southbound on Oklahoma 58 and lost control on the ice-covered highway and went into a broadslide, according to the report. The vehicle crossed the centerline and collided with a 2012 Chevrolet Silverado driven by Jeffrey Conrady, 43, of Enid.

Jump was taken to St. Mary's Regional Medical Center and admitted in stable condition with arm, leg and trunk injuries, according to the report. Conrady was not injured.

Seat belts were in use in both vehicles, according to the report.

In Enid, tree limbs weighed down with ice fell, bringing down power lines across the city. That left emergency personnel scrambling to respond to calls of fires and blocked streets caused by the broken lines and limbs.

Much of Oklahoma, including the Enid area, remains in an ice storm warning through 1 p.m. Wednesday, according to National Weather Service. Significant icing already has happened and more was expected Tuesday night.

"Power outages and tree damage are likely due to the ice. Travel could be nearly impossible," NWS said in the warning.

NWS called for the freezing rain to end during the early morning hours Wednesday.

The forecast for Wednesday calls for a 90% chance of showers and possibly thunderstorms, with a high of 38, according to NWS. Rainfall could be between 1-2 inches.

Rain also is expected Wednesday night, according to NWS, with a low of 35. There is a 30% chance of rain Thursday, then skies will become partly sunny. The high is expected to be near 45.

Sunny skies are in the forecast through the weekend, with high temperatures reaching into the upper-50s by Saturday.