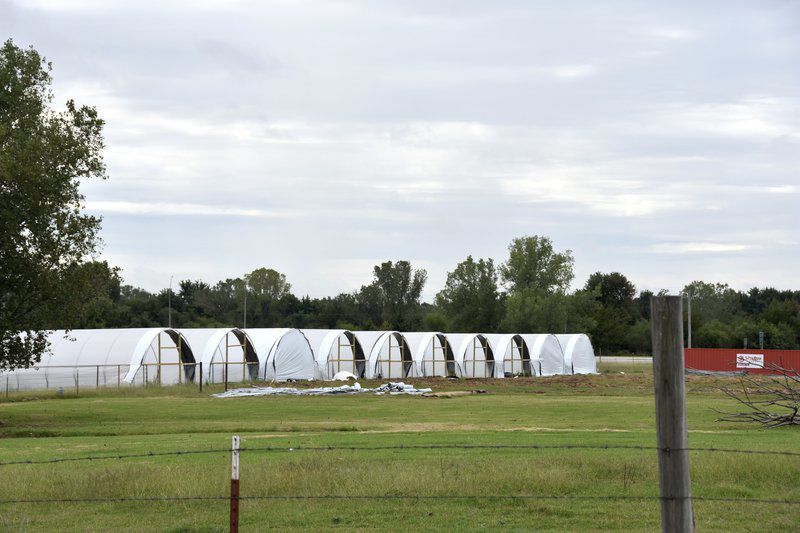 ENID, Okla. — At the moment, Lucky Flower Farms isn't much more than a series of empty hoop houses on the east side of town, but for some city commissioners, the planned marijuana growing operation is raising questions over safety and aesthetics.

When the entrepreneur behind Lucky Flower Farms came before Metropolitan Area Planning Commission in August, it wasn't made entirely clear what the business was all about, Ward 6 Commissioner David Mason said.

"In my mind I thought they were going to grow trees and flowers and everything else like that," Mason said.

That's not the case.

Lucky Flower Farms is one of 35 registered cannabis growers in Enid, according to Oklahoma Medical Marijuana Authority, but once in operation, it will perhaps be the most visible.

That visibility is one of Mason's biggest concerns.

"Coming in on 412, it's elevated, so everyone that comes into our city, that's the first thing they're going to see," he said.

The grow operation is required to construct a fence around the property, but Mason doubts it will help much.

"People are going to see right over the top of that fence and into the grow houses."

He's not opposed to the industry, he said, and aside from security, his worries center on what sort of impression the greenhouses will leave with those going to, from, and through Enid.

"I think there could be a lot of places it could go ... that would be better for the city," Mason said. "Personally, I don't want that to be the first thing that you see."

The plot of land in question has been in the Revels family for years, Amenda Revels-Ploeger said.

It's her father's land, and in the past it's grown more traditional crops, and even supported some cattle. It's entirely possible it will continue to do so even as its primary purpose shifts to serve a newer, more restrictive industry, she said.

No cannabis is growing yet. There's more infrastructure work to be done, some city inspections to knock out. She's not sure when exactly Lucky Flower Farms will be up and running, but the day is getting closer all the time.

"It's an uphill climb, but we're trying," she said.

Revels-Ploeger was born in Enid, she said. Her background is in real estate and motherhood; Lucky Flower marks her first foray into the marijuana industry.

"Primarily I've been a mom. Most of my life, actually," she said. "I was a young mom, so right now I'm kind of coming into my own."

She's "blossoming," she said. The industry is new and her interest in it is no older, but her passion runs deep. She is dedicated without doubts, she said.

"I have been interested in the cannabis industry ever since it was legalized for medical use. Over time I've immersed myself in information, like hours and hours and hours of it," Revels-Ploeger said.

Her partners are all family, she said, and they seem to share in her enthusiasm.

"We are manning the operation right now by ourselves, so we're working hard around the clock, as you can probably see driving by the massive greenhouses that are being put up," she said.

On the subject of security, some measures already exist and more will be taken.

During an early September city meeting wherein Revels-Ploeger spoke to commissioners while pursuing necessary re-zoning, she offered some details in that vein.

Currently, there is a double barbed wire fence around the entire property, she said. Per OMMA regulations, she will have to install further fencing around the property, which must be opaque to hide everything from public view, she said.

On top of that, she promised some form of 24-hour security on site.

Despite the visibility of the grow operation and its prominent location by U.S. 412, she believes it will blend in well with its surroundings.

"Going in to Enid from that direction, it's a very industrial area and with these greenhouses, you're not going to be able to see inside and tell what they are," she said.

"I think considering it as anything else is living in the past a little bit," Ezzell said. The greenhouses are going up in his ward, and that's a boon, he said.

"It's a big market and it's a growing industry and we want folks who are going to invest in those industries to invest in Enid, so we don't get left behind. We want our piece of it," he said.

Like Revels-Ploeger, he doesn't anticipate the location of Lucky Flower Farms to present much of a problem.

"Coming in to Enid, you see Koch, you see Vance, you see the wind turbine storage operation, you see Hanor, you see Love's. There's all kinds of stuff out there well before the grow house," Ezell said.

If the east side enterprise complies with OMMA guidelines and cooperates with the city, then as far as he's concerned, there's nothing left to object to.

"They're following the rules, they're investing money in the community," he said. "That's kind of what we want from anybody, isn't it?"