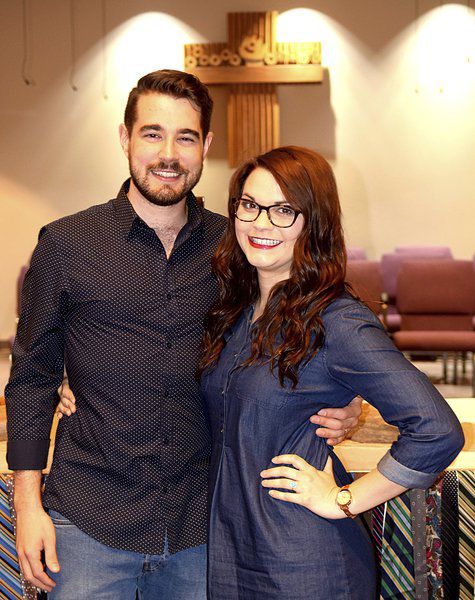 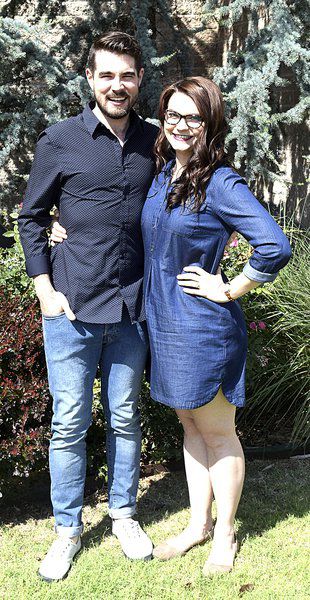 ENID, Okla. — It's not unusual for United Methodist ministers to move from congregation to congregation every few years. Pastoral itinerancy is one of the hallmarks of the denomination.

So, there was nothing unusual about the Christ and New Hope United Methodist congregations receiving new ministers at the same time. What is more unique, though, is that these congregations' new leaders are a newly married couple.

The Revs. Emily and Michael Robnett took over the pastoral posts on June 1 — Emily at New Hope and Michael at Christ UMC.

The couple were introduced by a mutual friend while still in seminary, and were married in May, in between their two graduations. They then packed up, accepted their commissions in the church and moved to Enid.

"It's been all the major life events in a month," Emily said with a laugh.

"It's been quite a hectic couple of months," Michael added, "but we love it."

The call to ministry

The couple share similar stories of how they came into ministry: They both felt the call early in life, and both put it off for some time before accepting the call.

Emily said she was first drawn to ministry in her senior year of high school. She'd been invited by a friend to attend church, and before long she felt at home in the congregation.

"It really felt like I belonged there," she said, "and I never looked back."

She grew in her faith, and her connection to the church, and her pastor eventually saw something of Emily's future.

"I talked to my minister, and he asked me if I'd ever thought of becoming a minister," Emily said. "At the time, it was absurd, because no 18-year-old wants to be a minister. But it was something that stuck with me through college."

From a Navy family, he moved around a lot when he was a kid, and experienced a lot of "church shopping" as the family was assigned and reassigned around the country.

The family attended Baptist and non-denominational churches, but it wasn't until they settled in Louisiana that Michael found a church where he felt at home.

"I started attending a United Methodist church there, and I really liked it and what it was about," Michael said.

And then, Hurricane Katrina made landfall in August 2005. The storm — one of the most devastating natural disasters in U. S. history — destroyed Michael's new church home.

He joined some of the other congregation members in trying to repair and reinstate services at the church, but their numbers were few.

"A lot of the adults had left by that time," he said, "because, 'Who wants to go to a bombed-out church?'"

Despite the odds, the remaining congregants managed to revive the church — an experience Michael carried with him through college.

After college he went to work in the nonprofit sector for a group trying to foster resource-sharing among charitable organizations. Michael said it was worthwhile work, but there was something missing.

"I had gotten out of college and into the real world, but something wasn't sitting quite right," he said.

Eventually he resigned from his job, surrendered to what he'd been feeling since high school, and enrolled in seminary.

"It was only partly my choice," Michael said. "It's what I had to do. I tried to do something else and I couldn't do it because my heart wasn't in it, and God was pulling on me."

He said most people who have a calling to ministry run from that call for a time.

"If you look at almost all call stories, they try to fight it, but every time God sees them through it," he said. "It doesn't matter how long you run from it, it's still going to call you."

Emily also experienced fear and hesitated to pursue ministry, but found peace when she accepted her calling.

"I was young and it felt like a lot of responsibility," she said. "In considering your call there's a lot of fear, especially early on, because you don't understand what God is asking of you. But, once you accept that all, there's a peace.

"It's scary to say yes to God," she said. "But, once you you do, and you put that trust in God's hands ... there's nothing you need to worry about because God is going to provide for you.

"You just have to ask yourself, 'Is this a message worth living for,'" she said, "and I think we can look back at our past and see it is, no matter the risk."

Now that she's finally in her first assignment as a minister, Emily said she's driven by the spirit that first called her to serve.

"It's the abiding presence of the Holy Spirit that keeps me going," she said.

Emily said New Hope and Christ UMC were a match for them as a couple because both churches were in need of a new minister at the same time, the churches are close to each other, and "they're both a good match for our gifts."

Michael and Emily said those gifts, and their passion for ministry, feed into a common need of both congregations: to grow.

"Christ United is in a position where it's ready to become something new," Michael said. "It has wanted to become that for quite a while now, and it just needed that little push."

He said that "something new" will include pushing outside the church walls, and embracing ministry in the community to grow the congregation.

"I think that is the same overarching need of this church too," Emily added, speaking of New Hope. "They just want to grow."

Emily said she sees in New Hope much of the warmth and potential of her childhood congregation, where she first felt the call to ministry.

"My church in Ada gave me a place to grow, and that's what this church provides," she said. "They're ready to grow, and try new things and provide for the needs of the community."

Both ministers are looking forward to being out of the office as much as possible — out in the community, serving people's needs. And, they share a common vision of what that ministry will look like.

"It's basically about emulating God in all that you do," Michael said.

"We're called to be with people at some of the most beautiful and the most tragic parts of their lives," Emily said. "Ministry is about those relationships, and caring about people and loving them no matter where they are in their lives."

Neal is education and health reporter for the Enid News & Eagle. He can be reached at jneal@enidnews.com.

Services honoring the life of Joe Long Sr. will be held 2:00 p.m. Friday December 3, 2021, in the North Garland Church of Christ under the direction of Brown-Cummings Funeral Home. Condolences may be shared at www.Brown-Cummings.com.

The open visitation for Jerry McCune, 75, of Enid, will be held from December 2, 2021, through December 4, 2021, in the Brown-Cummings Funeral Home Chapel. Condolences may be shared with the family online at www.Brown-Cummings.com.