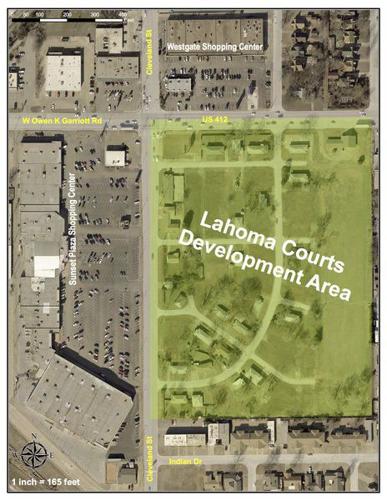 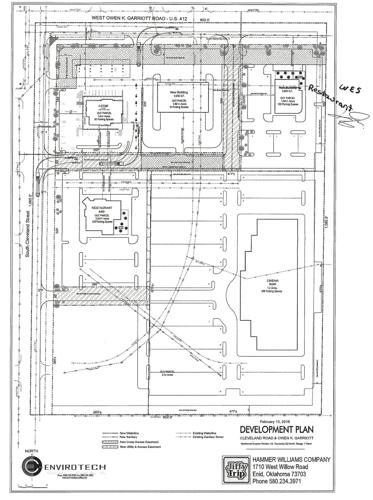 A development plan for the Lahoma Courts subdivision, now known as "The District," at Cleveland and Garriott. (Contributed) 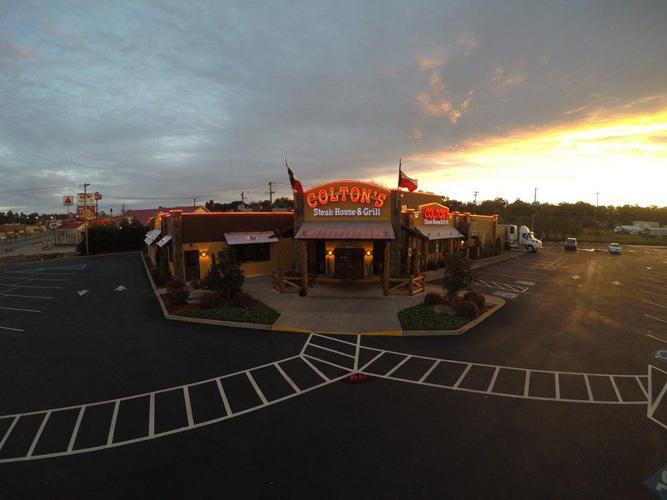 A photograph of an existing Colton's Steak House & Grill. (Contributed)

ENID, Okla. — As the Lahoma Courts property deals close, plans for development of the property continue to progress.

"The public really wants this done, and we all want to get it done quickly, but there’s just a lot of activity right now in this corner, a lot of interest and … it’s kind like of building a foundation for a home, it just takes time," developer Kyle Williams said. "I think the city will be pleased, there’s a lot of people working on it and hopefully it won’t be too long."

Back in late February, Enid City Commission purchased 25 properties in Lahoma Courts, near Cleveland and Garriott, bringing the city's total possession of Lahoma Courts to 47, leaving just one property. The city bought the properties at a cost of $2.1 million from Westside Builders Inc., registered to N.H. "Bud" Nicholas. 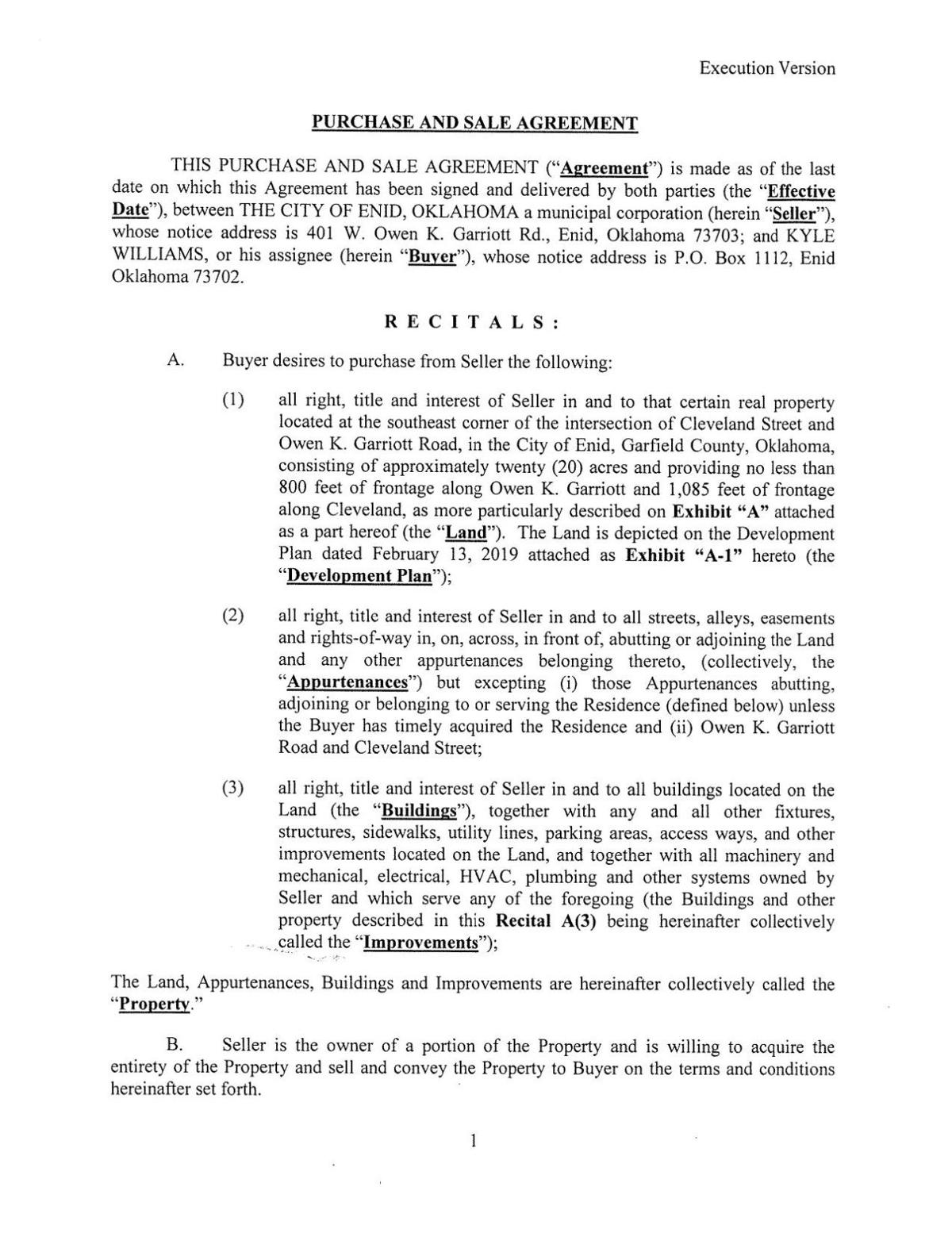 According to purchase records, Westside Builders previously had purchased the 25 properties between 2001 and 2010, with all the purchases totaling roughly $1.15 million.

Then, the city proceeded to approve a development sale agreement with Williams, with the city to receive $1.35 million for Lahoma Courts and $2.048 million in infrastructure improvements to support the development.

As far as the process stands, Williams said the city is working to close on the 25 properties with Westside Builders Inc. After that is done, Williams will go through closing on the property with the city, and then the real work can begin.

"From the time we close on the property, we probably expect to be moving dirt probably within 30 days or less on our property. We will be moving very, very quickly ... literally as soon as we close on the property those things will begin immediately. There will not be a 30-, 60-, 90-day lag," Williams said. "We are all motivated. In fact, we’re trying to figure out how to crunch the timeline to do it faster. And the city has been really good, and I think it’ll all progress nicely."

The city earlier stated a new movie theater has been proposed for the property, but Williams said he wasn't able to speak about a proposed cinema. However, he did outline a vision for the property including the Jiffy Trip, Colton's Steak House, another restaurant, an entertainment venue and a "reasonable" chance at two retail centers.

A 7.4-acre "Cinema Tract" at the southeast corner of the development plan property is mentioned in the purchase and sale agreement.

"We’re working on the site plan right now, and we hope that we have a mixture of the convenience store with fuel and food, a couple restaurants, hopefully entertainment and a couple retail centers as well," Williams said.

He didn't speculate on what the second restaurant would be, but said work is being diligently done on one.

However, one possibility could be a Hideaway Pizza. Back in August, it was reported Hideaway Pizza officials were looking into an Enid location.

On Friday, Hideaway Pizza Marketing Director Janie Harris said nothing has been signed yet, but Hideaway Pizza is exploring the possibility of signing a deal, and hoping to do so soon. However, no specific confirmation on which company or location was disclosed. She said if a deal happened to be signed, they'd hopefully be looking at a 2020 opening.

Once ground is broken on the new restaurant, Dean said construction would be finished in five months. He's hoping for a December or January opening if ground can be broken by late summer.

"I’m really excited, really excited. Two or three times, I’ve spent two or three days in Enid and it’s a great city, I can tell. ... It seems like a very busy town and we’re excited to be there. I think it’ll do great," Dean said. "We want to bring good food and good steaks to the town of Enid and ... I know there’s a need there for it, so that’s why we’re excited to get there. That’s why we’re coming there, we know they got good people and have a need."

"I think (they'll see) good food, good steaks, good friendly service. We kind of pride ourselves on that, I think that’s the biggest thing is providing the service they need and getting them good food," Dean said.

Williams, the president of Hammer-Williams Co., said the Jiffy Trip will be between 5,000 and 6,00 square feet and will be very similar to the one being built on Garland. He said planning is also underway for landscaping and other development work for Lahoma Courts.

"We really are trying to make certain it looks very, very nice and we improve the area, improve the look. It is a major intersection for our community, and so that just takes a little bit of time," Williams said. "We’ve got a lot of great people helping with that, and we hope it will be a destination point for many people — not only for our community, but people coming in from out of town. It’ll be a destination corner for them."

A city of Enid retail consultant is marketing the Lahoma Courts property, while an Oklahoma …

Despite recent closures, economic and retail development in Enid on the rise with new openings and prospects, city consultant says

"Retail is changing, and the retailers that are growing right now are retailers that understand the new consumer attitudes toward purchasing and understanding the online phenomena that’s taking place." — Ricky Hayes, city retail consultant

Hideaway Pizza officials are looking in Enid for a possible new location.

On Wednesday, Kime said the city is working with the developer to determine the best date to begin road closures and a new press release notice will be provided when they are rescheduled.