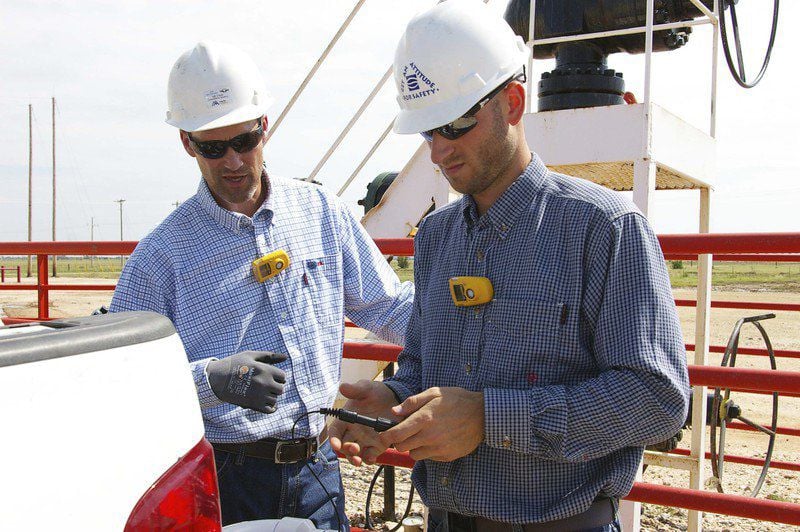 Kyle Murray and Austin Smith format equipment that will measure downhole pressure in a saltwater disposal well northeast of Cherokee, Okla. The information may help determine the relationship between disposal well pressures and earthquakes. (Photo provided by Connie Burcham/Fairview Republican) 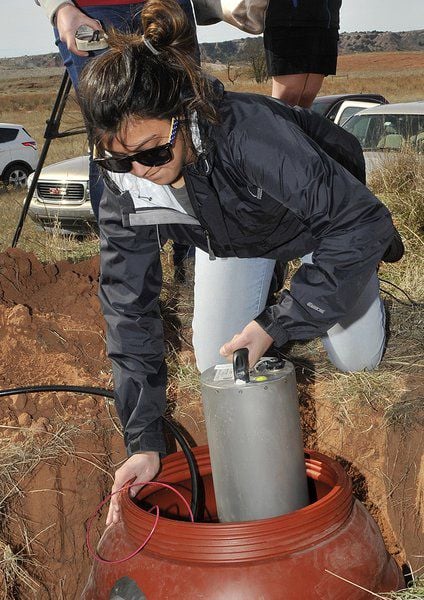 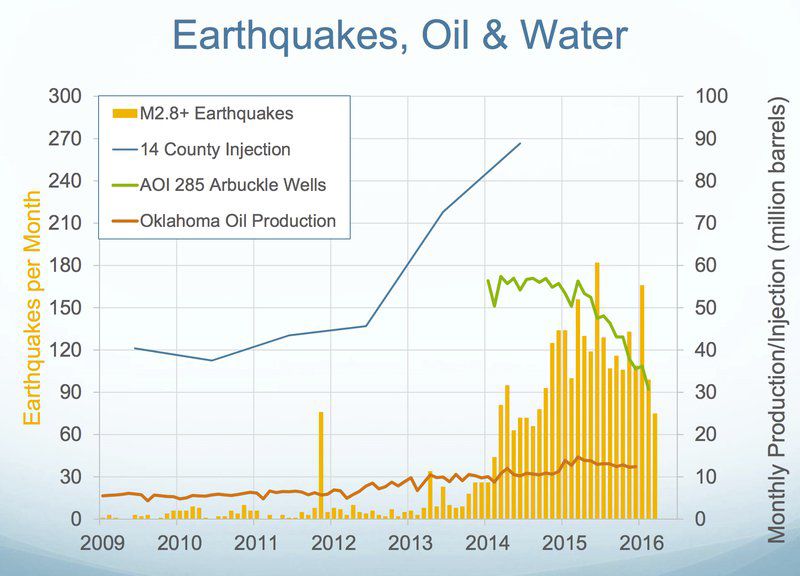 Kyle Murray and Austin Smith format equipment that will measure downhole pressure in a saltwater disposal well northeast of Cherokee, Okla. The information may help determine the relationship between disposal well pressures and earthquakes. (Photo provided by Connie Burcham/Fairview Republican)

This Enid News & Eagle six-week series from 2016 explores the science behind efforts to quell a sudden upswing in earthquakes in the Sooner State that began in 2009. The series explores work accomplished by state geologists since an original six-week ENE series in 2015. Also see: ENE ongoing investigation: Who's at fault?

ENID, Okla. — As “Earthquake!” became a household term in Oklahoma, the temblors normally associated with California or Japan produced more questions than answers.

Scientists across Oklahoma are working to learn more about why the Sooner State is moving and shaking (Also read: Frack and fiction: Separating myths, misconceptions).

Oklahoma Geological Survey, a state research and public service agency affiliated with the University of Oklahoma Mewbourne College of Earth and Energy, has almost 20 studies underway to learn more about earthquakes and what causes them, especially in the Arbuckle Formation.

ENE ongoing investigation: Who's at fault? (series stories and more)

The Arbuckle formation — where oil and gas companies dispose of excess water from oil and gas production  (CAN YOU DRINK IT?) — is the most popular injection zone in Oklahoma. It is above the crystalline basement.

Jeremy Boak, executive director of OGS, said a number of studies are underway, most of which have not reached conclusions.

“We have shared our observations that earthquake rates are declining over the area of interest, but that a couple of short, larger swarms of earthquakes have affected this rate,” he said. “As a consequence of the activity on the Galena Township Fault in the northwest (in an area north of Fairview and west of Enid) and the recent Pawnee County earthquake, 2016 will actually be the highest seismic activity year as measured by seismic energy release, even as the overall frequency of earthquakes has declined from its peak.”

Most of those studies are funded as a part of the regular OGS budget and sponsor grants from the nonprofit Research Partnership to Secure Energy for America, Boak said, as well as funds from the Secretary of Energy and Environment, and from Gov. Mary Fallin’s emergency funds.

“Better understanding of the larger earthquakes may help us be more targeted in the reductions called for in injection, although the current reductions have already created a very significant downward trend,” he said.

Kyle Murray, a hydrogeologist with the OGS, said researchers are learning all they can about the Arbuckle.

“At this point, we don’t have much data about the Arbuckle because it’s so far below the ground we can’t measure it directly,” he said.

In August, Murray and his team installed equipment in eight dormant disposal wells in Alfalfa, Grant and Payne counties to monitor how fluid levels and pressures in the Arbuckle formation fluctuate as wastewater is injected into the formation elsewhere.

“We have been monitoring fluid levels and pressures for roughly four weeks,” he said. “In some of the wells, we see no significant fluctuations of fluid levels. The only levels we see are like high tide and low tide. That’s a really small fluctuation…

But some of the wells are reporting more fluctuations.

“In a few of the wells — four — we see the effects of injection in nearby injection wells,” he said. “That’s the reason we did this. If we can see there is effect, we can analyze the data. If we combine the fluid level fluctuations — we observe with data from nearby injection wells — we can use that to calculate properties of the Arbuckle group we are injecting into.”

This data would provide information into permeability and how fluid moves throughout the Arbuckle formation, Murray said.

“We can see which zones are connected,” he said. “If we have wells that are instrumented in the upper part of the Arbuckle — and there’s a well injecting into the lower part — we can see if fluid is moving between the wells.”

“We observed a pretty substantial pressure change in two of the wells immediately after the earthquake,” he said. “We don’t know exactly how to interpret that yet. It was an unexpected response.”

Murray said he expected fluctuation, but thought it would be recorded by instruments for about 30 seconds or a minute.

“But what we found was the pressure increased for 10-and-a-half minutes following the earthquake, and it took about two hours to decline down,” he said. “It was sort of a strange response we haven’t seen.”

Murray’s study is 90 percent funded by Oklahoma Independent Petroleum Association, the state's largest oil and gas advocacy group, which provided $81,000 to the state's $10,000.

Keys to the issue

"We need to understand the mechanism of what's going on so we (oil and gas producers) can operate in a manner that reduces the possibility of triggering seismicity," he said.

Hatfield said if the project can help Oklahoma find the keys to the issue, the state and industry may be more effective.

This project is just the beginning of studies that will focus on fluid and pressure fluctuations, Murray said.

“There’s interest from other agencies outside OIPA to instrument other wells,” he said. “Other projects that are related to fluid pressure and seismicity, stress and strain and things you’d want to measure, that will happen as we iron out the details.”

“We are looking across all the induced seismicity areas in the United States, so if there are some patterns or variations of geology to find rules we can use, like how far a well might influence the area around it, and if there are patterns among those,” he said.“In Oklahoma, we have so many wells it’s hard to manage when we don’t know the general rules across the area.”

Halihan said researchers also are working to bring geophysicists to Oklahoma to do some remote sensing, and they plan to apply for grants to fund that project.

OSU has teamed up with Cornell University in New York to place seismometers in Pawnee and Garfield counties, but Halihan said OSU’s contribution is limited.

“We help them out,” he said. “Storage and hard labor.

“We are trying to look at pressure distribution in the Arbuckle to find places that would be better or worse for injection.”

Asher is education reporter for the News & Eagle. She can be reached at sasher@enidnews.com.

Like Oklahoma, other states have dealt with induced seismicity

How depth factors into earthquake damage

ENID — The services celebrating and honoring the life of Ladonna Lass, of Enid, are pending under the direction of Brown-Cummings Funeral Home. Condolences may be shared online at www.Brown-Cummings.com.