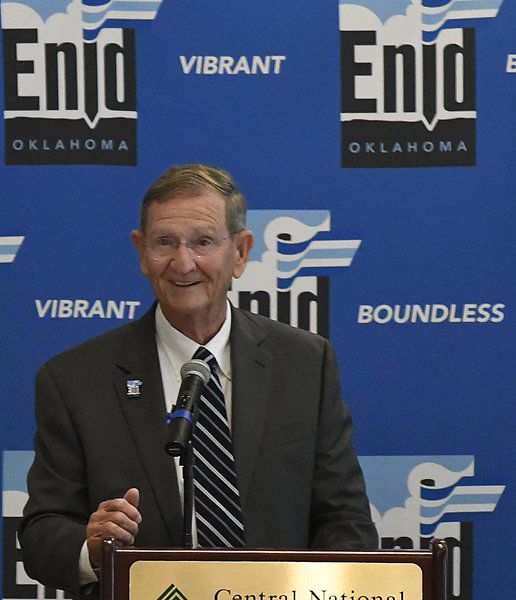 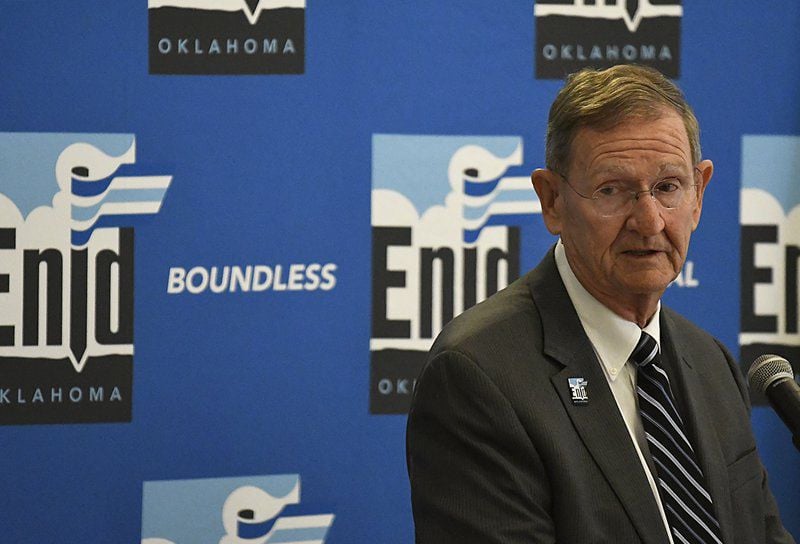 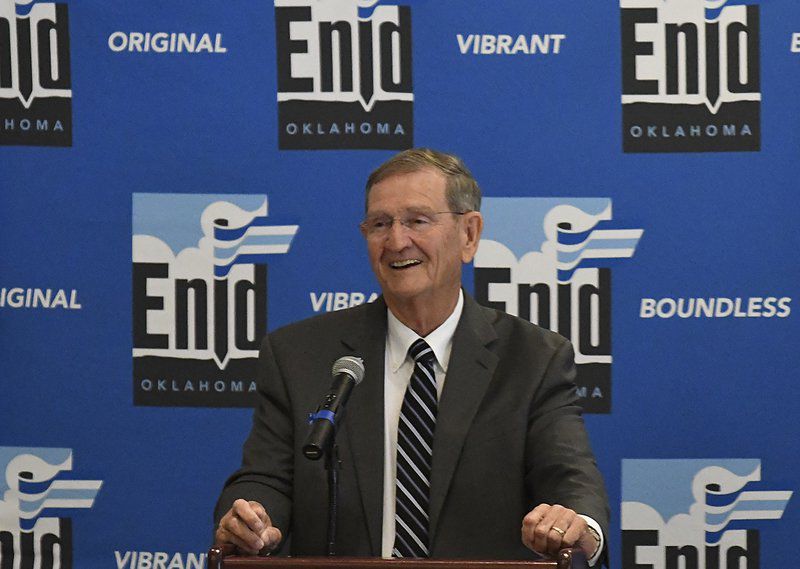 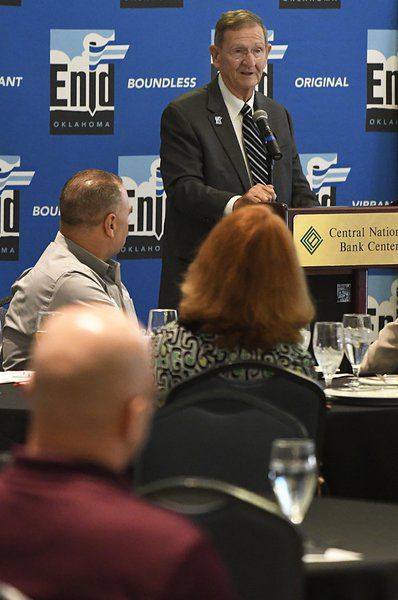 Securing a new water source for Northwest Oklahoma for the next half-century was the No. 1 achievement of Enid City Commission, Shewey said. Residents believed in Enid when they resoundingly passed a $360 million-plus bond issue last August to build a 70-mile pipeline from Kaw Lake to the city.

“That’s a huge project — a huge facility coming up,” hesaid. “If you want to see what three football fields look like inside of one building, drive down 412 and see that.”

Shewey noted the 2016 Oklahoma Speaker's Ball was hosted at CNB Center, marking the first time the fundraiser was held outside of the Oklahoma City metro. Additionally, the new Starz TV series adaption of Neil Gaiman’s “American Gods” was filmed in Enid last year.

In the future, the mayor said he looks forward to the Oklahoma Arts Council's annual conference coming to Enid this October.

Speaking from the second-story Nick Benson Memorial Ballroom at CNB Center, Shewey looked out the window when discussing the downtown hotel slated to be built between Independence and Grand.

In February, the city commission approved a master development agreement to build a Best Western GLō hotel on property located on Maine. ENIDBWP LLC — Aston Management and Dr. Atul Patel — is the developer of the hotel.

“Next year, I hope to look out the window and see construction going on,” said Shewey, adding that it should “somehow” be connected to CNB Center.

Highlighting national recognition, Shewey said Enid was named 39th best micropolitan in nation by Site Selection magazine, one of eight communities designated an Oklahoma Creative Community and ranked as the seventh best small city to start a business by WalletHub.com.

Shewey listed off new businesses opening in Enid in 2016 and noted that Hanor, parent company of Roberts Ranch, recently moved its corporate headquarters to “a beautiful new building” in Enid.

“Oakwood Mall has a new owner, and we are anticipating new things there,” Shewey said.

Shewey said Enid was selected as a wind farm staging area for blades, towers and other industry components located on 66th.

“As Enid continues to grow, we must remember to stay true to our character — true to who we are,” he said.

“Today is another great day in Enid, Oklahoma.”

Kime said Keating called Wednesday to say he was headed to Washington, D.C. Keating, a former FBI agent, met with President Donald Trump to discuss the FBI director opening after the firing of James Comey.

Kime read an email from Keating at the luncheon:

“First off, please forgive me,” Keating wrote. “You can tell the folks there that (Wednesday) afternoon I meet with the president, the (vice president) and the (attorney general). I’m on the short list, but I suspect that I shall be the bridesmaid rather than the bride. But the interviews and consideration were kind and generous.”

'State of the City' address to be broadcast

ENID, Okla. — Enid Mayor Bill Shewey’s State of the City address is being broadcast on the Enid Television Network beginning Monday. The video…

The Enid City Commission unanimously approved preliminary plans and specifications to have the first Best Western GLō hotel in the state, and …

A construction timeline will be announced soon. City Manager Jerald Gilbert expects construction to begin early in 2018 with dirt work.