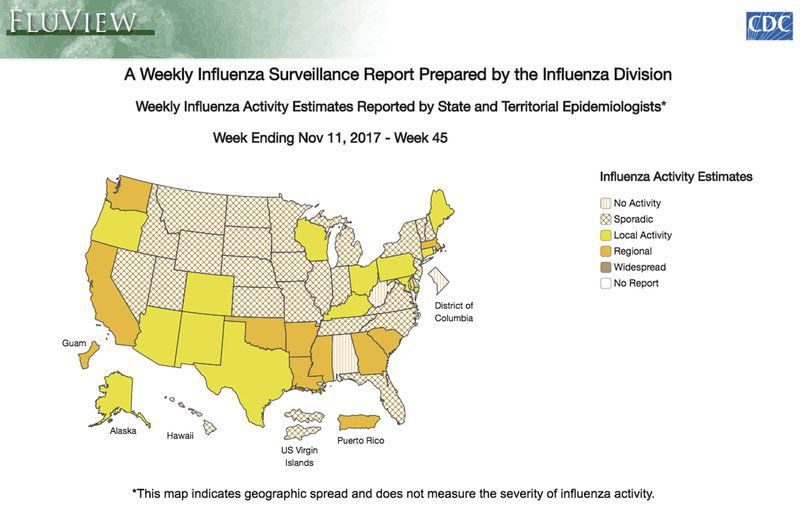 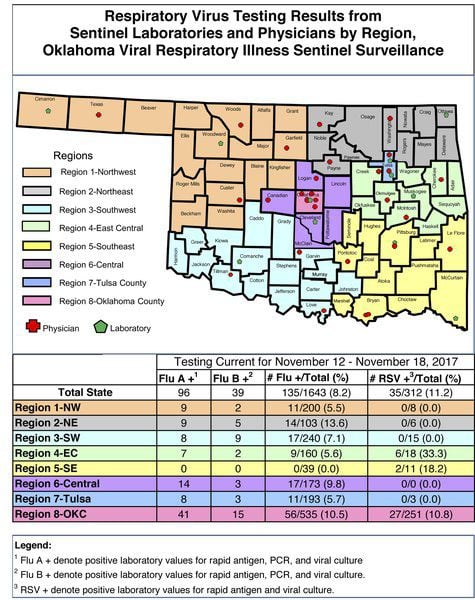 ENID, Okla. — The incidents of respiratory illness in Oklahoma began a strong rise earlier this month, even as flu season gets underway across the nation, according to Oklahoma Department of Health.

There have been 80 hospitalizations reported involving influenza since Sept. 1, according to the Health Department’s website. None of those have been in Garfield County or Northwest Oklahoma. The closest have been one case each reported in Kay and Noble counties.

But the RSV numbers spiked heavily in the Sooner State, mirroring a similar strong, early rise in 2016. The number of illnesses reported saw a later increase in 2015, according to the Health Department.

Respiratory syncytial virus (RSV) is a common respiratory illness normally affecting children and the elderly. RSV is the most common cause of pneumonia and of inflammation of small airways of the lungs in infants and children under 1 year of age. Adults who contract the virus mostly experience mild, cold-like symptoms.

The virus is not a reportable disease in Oklahoma, but officials track outbreaks in order to control its spread, according to the Health Department website.

But the main health threat the department, along with the Centers for Disease Control and Prevention nationwide, track is influenza, which currently is showing regional activity in Oklahoma.

There currently is no widespread activity in the United States, but holidays are a time that can change, according to Oklahoma Medical Research Foundation.

“It is very easy to catch any sort of illness this time of year with all the hugs, handshakes and shared surfaces at parties or shopping malls,” said OMRF immunologist Eliza Chakravarty, M.D. “The flu can spread like wildfire, and these settings can act just like kindling.”

CDC recommends being vigilant with handwashing and using hand sanitizer. Plenty of sleep and eating healthy gives the immune system a leg up, according to OMRF, which recommends Oklahomans get the flu vaccine.

“Even though the flu shot has been out a few months, it’s never too late to get it,” Chakravarty said. “The flu can be life-threatening, and the vaccine is a proven way to protect yourself and the people you care about. It’s an absolute no-brainer.”

However, as many as 60 percent of Americans forgo the annual shot.

The vaccine prompts the immune system to view these proteins as foreign and builds up a defense to them. This process preps the body for a rapid immune response to the actual virus, often preventing it altogether.

“The side effects people experience after a flu shot, like soreness, swelling at the injection site and low fever do not mean you have the flu. It’s simply your body doing its job and building up its defenses,” Chakravarty said. “If you get the flu, you’ll know it, because the symptoms will knock you down.”

Flu symptoms include an overall feeling of illness, severe aches and pains in muscles and joints, notable fatigue and weakness, headaches and high fever.

“Getting the flu is an awful experience. Getting it during the holiday season is even worse,” Chakravarty said. “So if you need to be out and about running errands and meeting up with friends and family, it’s wise to protect yourself — and them — as best you can.”

Locally, several doctors’ offices, clinics and pharmacies offer flu shots. According to the CDC, the nasal spray form of vaccine is not recommended for this flu season.

Hassler is the digital content coordinator for the Enid News & Eagle. she can be reached at violeth@enidnews.com.