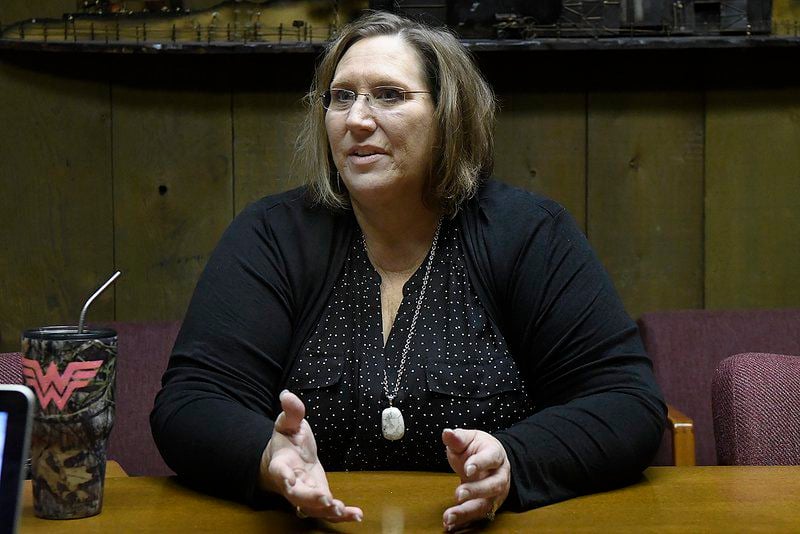 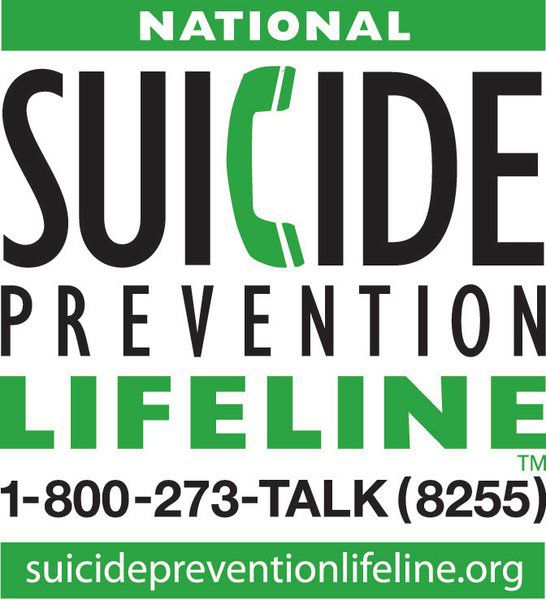 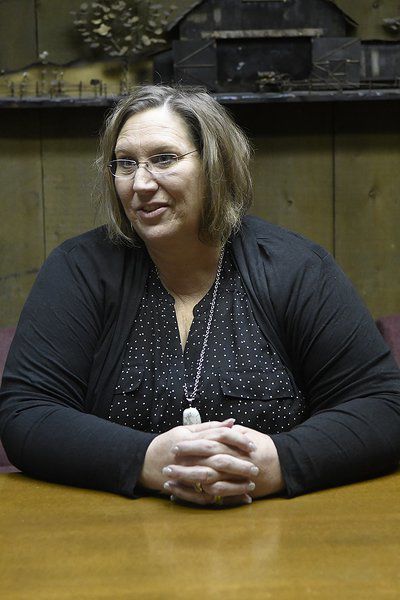 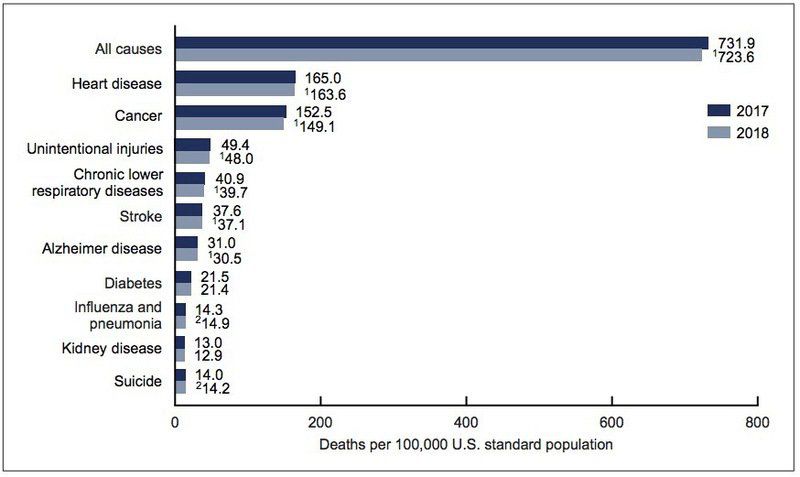 Recently-released data from the Centers for Disease Control and Prevention (CDC) show suicide remains in the top 10 causes of death in the United States and that the number of suicides increased slightly in 2018.

Recently-released data from the Centers for Disease Control and Prevention (CDC) show suicide remains in the top 10 causes of death in the United States and that the number of suicides increased slightly in 2018.

ENID, Okla. — Recently-released data shows the rate of suicide continues to climb in the United States, and Oklahomans continue to die by suicide at rates significantly greater than the national average.

But, new focus on bringing suicide prevention efforts directly to children and educators is showing some hope the tide is turning in Oklahoma, which had modest declines in suicide rate in 2018, the most recent year for which data is available.

According to data from the Centers for Disease Control and Prevention (CDC), released in late January, suicide remains the 10th leading cause of death in the United States, and the rate of suicide increased by 1.4% in 2018. In 2017, there were 47,173 suicide deaths, and in 2018 there were 48,344 — an increase of 1,171 additional deaths, according to CDC data.

The American Foundation for Suicide Prevention (AFSP) provides further numbers, based on CDC data, indicating there are roughly 30 suicide attempts for every person who dies by suicide — in 2017 there were 1.4 million attempted suicides in the U.S., according to AFSP.

The demographic most at risk, according to AFSP, is middle-aged white men. Men died by suicide more than 3.5 times more often than women, and white males accounted for almost 70% of all suicides in 2017, according to AFSP.

Harkavy-Friedman said concerted efforts, at all levels, will be needed to reduce the rate of suicide in the U.S.

“Until we scale up intervention efforts at the community, state and national levels, we will likely continue to see an increase in suicides in the United States,” she said. “Suicide is preventable. As a nation, we must take action by making a major investment in suicide research; translating that research into treating mental health; and further educating the public on the warning signs of suicide and what to do if someone is struggling.”

The American Association of Suicidology (AAS), in its own response to the CDC data, reached a similar conclusion.

“As the rate of suicide continues to climb in this country, year over year, it is necessary to focus on the few effective suicide prevention strategies we’re aware of,” said AAS President Jonathan Singer. “We’re at a tipping point, where we understand some fundamental, effective prevention methods, but must develop population-level implementation. This includes the potential of implementing non-traditional, alternative methods of intervention like community-based strategies that expand the scope of suicide prevention beyond mental health responses.”

In Oklahoma, suicide prevention advocates are hoping the kind of broad, community-based responses Singer mentioned will continue to reduce suicide rates in the state.

Oklahoma continued to have a significantly higher rate of suicide than the national avaerage in 2017, with 19 deaths by suicide for every 100,000 people, compared to the national average of 14 per 100,000. But, in 2018-2019, the state did see its first reduction in suicide rates since 2014-2015, according to CDC data shared by America’s Health Rankings.

Charita McOsker, LPC, program director for Northwest Center for Behavioral Health (NWCBH), said even a small decline in suicide rates is heartening, after a significant increase in recent years.

And, McOsker said, that increase disproportionately impacted rural areas, like the 12-county area she serves in North-central and Northwest Oklahoma.

In hopes of addressing that disproportionate impact, and reducing suicide in the region, McOsker said NWCBH has been focusing on Zero Suicide, a nationwide program that works to bring suicide prevention resources into public schools.

“We want to educate the public and provide services for all who need them, with the intent of preventing all suicides,” McOsker said. “We are targeting the schools and educators, because that’s who spends the most time with our young people.”

NWCBH offers the Zero Suicide training curriculum to any school, or any other entity in its 12-county area, that wants to train its members, students or employees, free of charge.

The main thrust of the program, McOsker said, is to educate people on the warning signs of suicide, to break down stigma surrounding suicide and mental health treatment, and to “get people to the resources they need.”

McOsker said there are some obvious warning signs everyone should know.

“If you hear someone say ‘I want to die’ or ‘I want to kill myself,’ that’s very obvious, very blatant,” McOsker said.

But, often warning signs are less obvious, she said.

She said people should look for statements like that which don’t have an obvious explanation.

“If a young person is studying for the ACT, and they say, ‘I can’t wait for this to be over,’ that may be understandable,” McOsker said. But, if the comment pertains more to life in general, she said that’s a red flag.

Unexplained changes in behavior patterns, letting things slip that they normally wouldn’t, giving away prized possessions, losing energy or interest in previous pursuits, or suddenly giving up on personal hygiene, all can be warning signs of depression and suicidal behavior, McOsker said.

“What you’re really looking for is when people change their beliefs, and no longer care about what they’ve cared about — any signs of quitting or giving up on life,” she said. “When a person stops caring altogether, if a person stops interacting with their friends or there’s a very sudden change ... and they seem to be isolating, that would be cause for concern.”

McOsker said episodes of personal loss, trauma or perceived failure can be periods of high risk, especially for those already suffering from depression, chemical dependence or other mental illness.

“If you have someone who has been clean and sober for a long time, and then they have a relapse, that time of relapse can be a very high-risk time for them,” she said.

Other common episodes of loss that can heighten risk for suicide are losing a job or being kicked out of school, the death of a loved one, divorce or diagnosis with a serious illness.

Especially when people are going through those kind of tough times, or if they’re exhibiting warning signs, McOsker said those around them should watch for any signs of acquiring the means for suicide, such as stockpiling pills or purchasing a firearm.

McOsker said one of the greatest barriers remaining to better suicide prevention is the persistent stigma surrounding suicide and mental health treatment.

Many still think suicide cannot happen to them or their families, McOsker said. But, she said, suicide affects all walks of life.

“The reality is, it’s not us and them,” McOsker said. “It can be any of us. So many people in our culture don’t get help. Either they’re too proud, or they think people will think less of them, or they don’t know how.”

One thing everyone can do to help, McOsker said, is to normalize healthy discussions of mental health treatment and suicide risk and prevention.

“Just teaching people to get comfortable with that, or how to get help from someone trained to ask and answer those questions, is important,” McOsker said.

Simply listening, without judgment, to those in need can drastically reduce the risk of suicide, she said.

“Sometimes if we even just feel like we’ve been heard, even if we can’t solve the problem, then we can cope with our own problems or pain,” McOsker said.

“We can’t always solve others’ problems, but what you can do is support them while they face those difficulties, and often that makes the difference.”

If someone is at risk for suicide, they can contact the National Suicide Prevention Lifeline at 1-800-273-8255. For anyone at immediate risk, call 911.