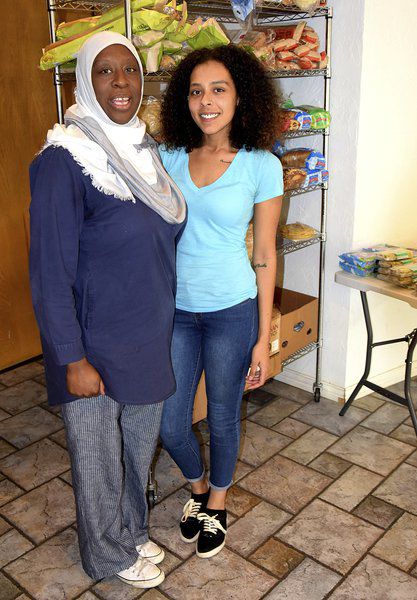 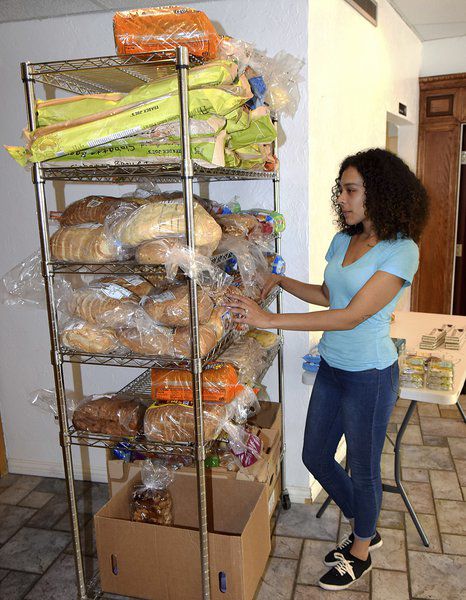 Courtney Boneta, a staff member at the Islamic Society of Greater Oklahoma City Mercy Mission food pantry, organizes food for the pantry's clients on May 7, 2018. 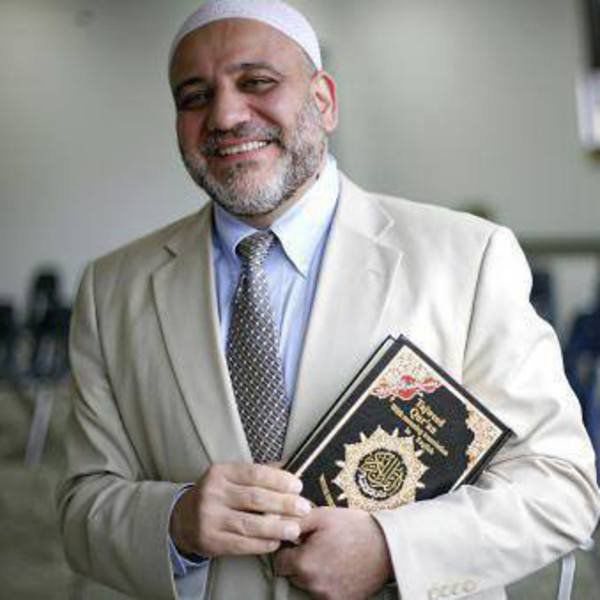 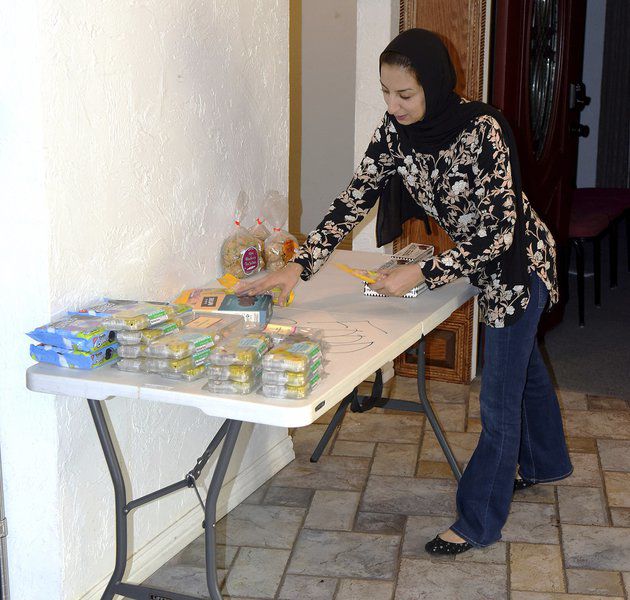 Salma Elsamad, president of the Mercy MIssion food pantry at Islamic Society of Greater Oklahoma City, organizes food for clients on May 7, 2018.

Courtney Boneta, a staff member at the Islamic Society of Greater Oklahoma City Mercy Mission food pantry, organizes food for the pantry's clients on May 7, 2018.

Salma Elsamad, president of the Mercy MIssion food pantry at Islamic Society of Greater Oklahoma City, organizes food for clients on May 7, 2018.

OKLAHOMA CITY — As a boy, Imam Imad Enchassi saw two radically different views of Christianity — one of peace and love, the other of violence committed in God's name.

As an adult, Enchassi works to foster peace and understanding between Oklahoma's Muslim community and Christians, Jews and other faith groups — a mission he hopes to advance during the Muslim holy month of Ramadan, which begins Wednesday.

He attended Christian schools and lived alongside both Christian and Jewish families.

In September 1982, Christian Phalangist militiamen, aided by Israeli troops, entered the Sabra and Shatila refugee camps, where Enchassi lived, starting three days of massacres that left more than 1,000 — some sources say as many as 3,500 — men, women and children dead.

Enchassi carries a lasting memory of hearing Christian militants invoke the names of Jesus and Mary in violence — names he was taught to honor in peace, both as a Muslim and as a student in a Christian school.

"Hearing Jesus and Mary's names invoked in butchering 1,800 people was strange on several levels," Enchassi said. "I was invoking the same names for safety, and I grew up in Christian schools and we invoked the same names. And then, the people who rescued me were the Red Cross.

"I can never generalize about someone’s faith," Enchassi said, "because I have seen the most love from some Christians and also some hate from those who claim to be Christians."

Enchassi moved to the United States when he was 17 and pursued a career in restaurant management — including managing a Furr's Cafeteria in Enid, in 1988.

Enchassi said he's incorporated "Mercy" into everything he's done in ministry, because it was the name of a Christian nun who took care of him after the massacres.

That selfless care for someone in need is the common tie that binds together Islam, Judaism and Christianity, Enchassi said. It's the common tie he hopes to promote through ISGOC's social work at Mercy Mission.

DeBorah Boneta, executive director of the Surayya Anne Foundation at Mercy Mission, said people come to the mission from all over Oklahoma for help with social issues like food insecurity, transitioning after prison release, eviction prevention, utility assistance and job skills training.

Surayya Anne also provides housing and social services to Muslim women and children in crisis and partners with the YWCA and other social service agencies to meet those needs.

Last year, with help from Islamic Relief USA and the Regional Food Bank of Oklahoma, the pantry provided 17,000 people with food assistance.

Boneta said all of the social services at Mercy Mission enable people to interact with Muslims in a spirit of charity and compassion, and to overcome stereotypes and preconceptions.

"Only 10 percent of the people who get food from us are Muslim, and a lot of people have told us, 'I am shocked you're Muslim — you're not what I thought a Muslim would be,'" she said. "We’re able to serve them and treat them with mercy and respect, and they come to see us as just human beings. And, they’re able to see that and take that back home with them."

But, not everyone is ready to embrace Muslims in Oklahoma, even when they're offering free services to the poor and hungry.

Boneta, who was raised a Baptist, said it didn't take long to uncover the hostility some feel for Muslims when she converted to the faith. She has become what she jokingly calls the "triple threat": a black, Muslim woman.

"I lost friends," she said of her conversion.

She was uninvited to prayer meetings she'd previously attended with co-workers.

"I was told I was godless, I was a heathen, I was going to burn in hell — just all kinds of horrible, hateful comments because of the path I chose," Boneta said.

A Pew study in early 2017 found 75 percent of Muslim American adults, and 69 percent of the general public, said there is "a lot" of discrimination against Muslims in the U.S.

Antipathy toward and violence against Muslims in America has risen sharply in the last two years, Pew has found.

In a recent study, the research center found assaults against Muslims in the U.S. rose to an all-time high in 2016, and there were 306 hate crimes against Muslims reported to the FBI that year, up 19 percent over 2015 and a 99 percent increase over 2014.

Enchassi said groups of purportedly-Christian protesters, armed with guns, have marched outside ISGOC in recent years.

When the protesters come, Enchassi said ISGOC welcomes them to take advantage of the free medical clinic and food pantry at Mercy Mission.

Boneta remembers a bit of wisdom from her Baptist grandmother when she faces hostility for her faith.

"You can put boots in the oven, but it doesn't make them biscuits," Boneta said, "and calling someone Christian doesn't necessarily mean they act Christian."

Focusing on the positives

She also still carries her grandmother's teachings on mercy and grace — teachings that span both her old and new faith — and her mother's example of serving the poor.

Her mother still volunteers at a Baptist food pantry, and the two often work together on each other's projects.

Boneta said her service to the poor and hungry is a continuation of, not a replacement for, the teachings she learned as a Christian youth.

"We just grew up with, 'Whatever you did for the least of these, you did for me,'" Boneta said. "What I do now with a scarf on isn't any different than what I did without a scarf."

Each day and each client at Mercy Mission is different. Boneta said she just focuses on the positives.

"I've been called the 'n-word' ... I've been called bad names, and we've had people not want to get food from us," Boneta said. "But, we've also had people say, 'I know you're Muslim but would you pray for my mother?' Those are the good sides. That breaks down some of those walls of hate."

Overcoming prejudice and fear is an incremental process, committed one act of charity at a time, Boneta said.

"I'm not going to be able to change everyone's minds about Muslims, about women or about black people," Boneta said. "But, if I can change a few people's minds, it's been a good day."

Living out her faith in love and service to those in need is the best way Boneta knows to teach others about Islam.

"For the most part I don’t personally feel like I have to go out and defend my faith," Boneta said. "My actions and my behaviors, the way I live my life, defends my faith."

Enchassi said he wants the social programs at Mercy Mission to bring understanding and acceptance of Muslims to the broader community.

"Education, attitude and relationships is what we work on," Enchassi said. "Positive education and positive attitudes give good relationships."

But charity is done first because it is the right thing to do, he said.

"We're going to continue outreach and social programs — everything that needs to be done," Enchassi said. "We do that because of our faith, not in spite of it. We will continue doing that regardless."