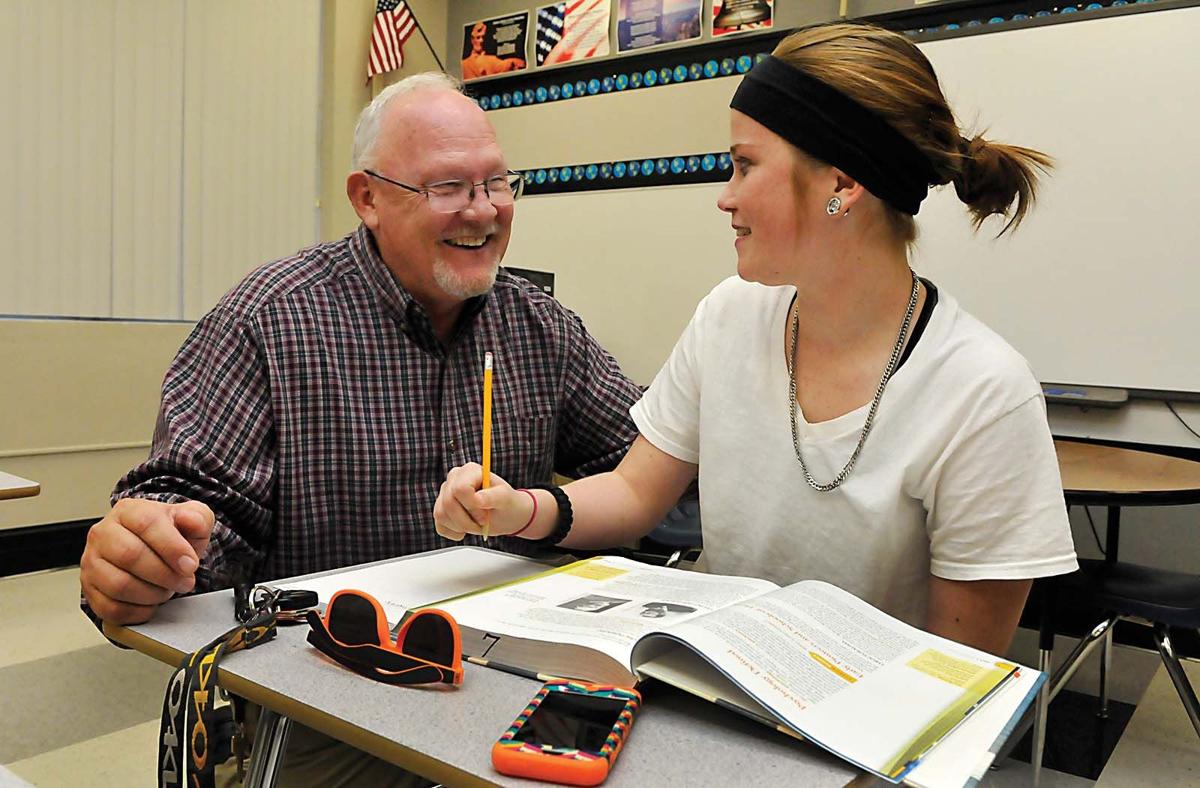 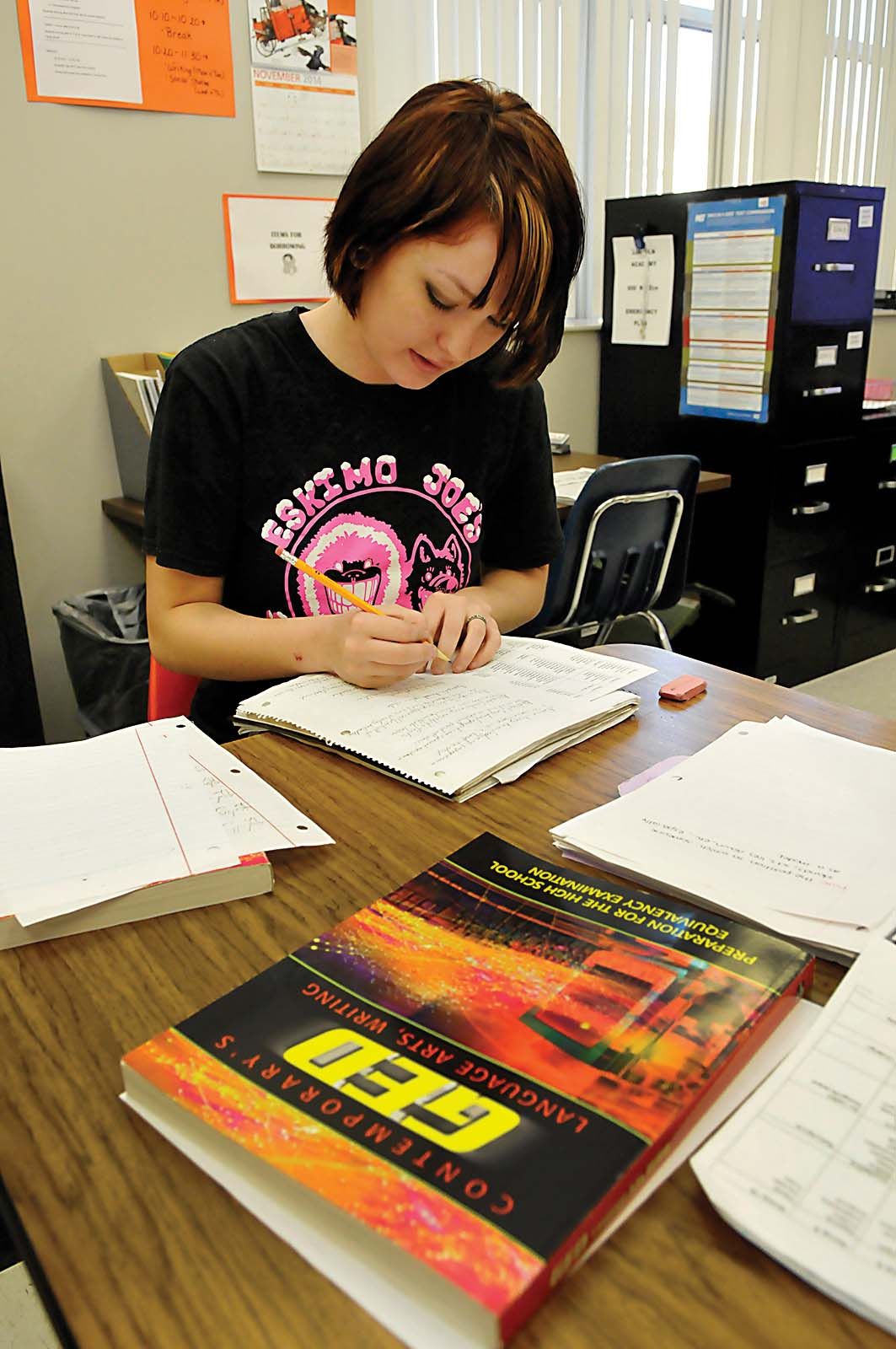 The adult education and English as a Second Language programs, which operated for 36 years and served over 5,000 students at Carver Educational Center under the direction of Clayton Nolen, moved to Lincoln Academy after Enid Public Schools decided earlier this year to move the programs to Lincoln and Nolen retired.

The move hasn’t appeared to cause difficulty for students or staff, said Jana Davis, morning social studies and language teacher.

“It was better than we anticipated with the move,” Davis said. “The students found us — we were kind of worried about that, but this is a central location and that seems to be good for the students. We do have several students who went to Carver for several years, and they seem to have made the adjustment.”

Mark and Kathy Ewald, married 18 years, come to class together. She is working toward her GED and he wants to brush up on math and science. Mark Ewald also helps Kathy Ewald study, and attends her classes as well.

“I wanted to get my high school diploma,” Kathy Ewald said. “I missed a lot of school and had to take care of my nieces and nephews — and we moved a lot. I think ninth grade is as far as I got.”

The couple met in Eagle Pass, Texas, where he worked repairing electronic systems on aerostat radar devices. They moved to Enid in 1995 because most of Kathy Ewald’s family is in the Wichita, Kan., area and she wanted to be closer to them. Mark Ewald transferred to a position working on flight simulators at Vance Air Force Base. He retired in 2011.

Once Kathy Ewald decided to pursue her GED, Mark Eward decided to just come along with her.

“I want to support her 100 percent,” Mark Ewald said of his wife.

Mark Ewald said that in studying alongside his wife, he notices how much change has taken place in the use of the language.

“The language is also changing in the structure and the way you write,” Mark Ewald noted.

Sonia Dominguez and Jessiqua Martin both are new adult students this semester.

“I want to go to Autry and study cosmetology,” Dominguez said.

Child-rearing responsibilities took Dominguez away from high school. Her children now are 4 and 7.

Martin wants to go to college and become a preschool teacher.

“I left school about a year and half ago because of my daughter,” Martin said. “She’s now 2.”

Martin said taking adult classes is easier than she expected.

“When I first came out I thought it was going to be really scary and really hard, but since I’ve been here, it’s been really easy,” Martin said.

She gives credit to the fact that she has more “life learning” and because she gets plenty of attention and assistance from the teachers.

On Wednesday night, the four advanced students were Endelisa Baeza and Claudia Hernandez, both originally from Mexico; Virginia Round, from the Micronesia island of Tuk; and Jun Ma, from China.

Hernandez, previously widowed, moved to the U.S. two months ago when she married an American citizen who was himself born in Mexico and immigrated 22 years ago. He’d tried to get her to join him in Enid two years ago, but when she lost her job in May, she decided the time was right to come here.

“But I never spoke like this all the time,” Hernandez said.

Although Hernandez’s English is fairly good, she wants to increase her confidence with the language.

Both Baeza and Hernandez said life is far better in the U.S. than it was in Mexico, where the government corruption and crime rate have citizens living in fear.

Ma has lived in the U.S. three years. She brought her son, now 21, and came to marry a man she’s known 11 years. They met when he worked in China.

“I want to speak English more,” Ma said. “I like it here. I like the American school. The teachers are nice and many people are very nice.”

It’s better than life in China, where teachers must be handsomely bribed for good grades; and a healthier environment in which to live, Ma said.

Prospective new adult students can call 366-7200 through Dec. 19 for new classes that begin in January.