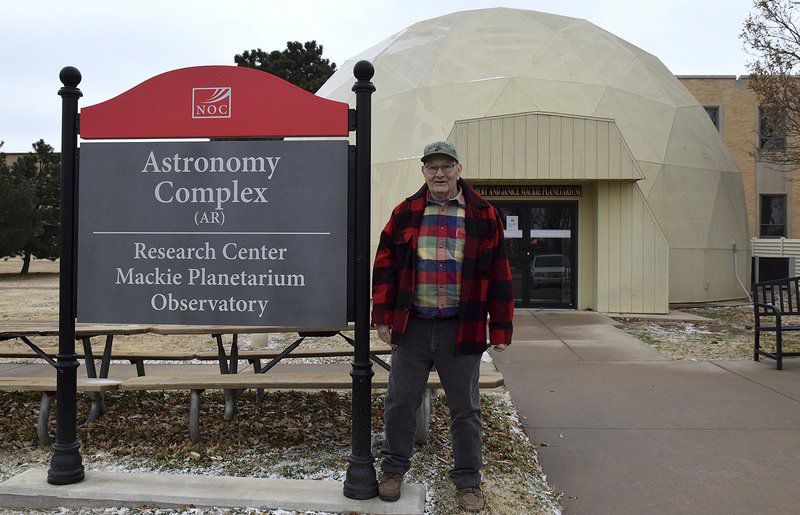 Northern Oklahoma College Enid astronomy and physical science instructor Fritz Osell poses outside the Bert and Janice Mackie Planetarium, where Osell hosts an annual Christmas program displaying the skies over Jerusalem and Bethlehem at the time of Jesus’ birth and explaining the astronomical signs followed by the Three Magi in Christian Scripture. 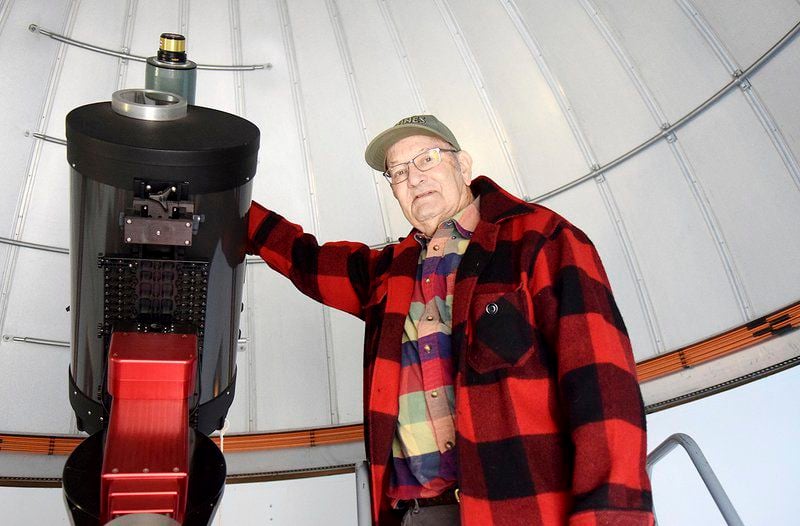 Northern Oklahoma College Enid astronomy and physical science instructor Fritz Osell stands beside the telescope in the college's observatory, which he designed and built in 2002.

Northern Oklahoma College Enid astronomy and physical science instructor Fritz Osell poses outside the Bert and Janice Mackie Planetarium, where Osell hosts an annual Christmas program displaying the skies over Jerusalem and Bethlehem at the time of Jesus’ birth and explaining the astronomical signs followed by the Three Magi in Christian Scripture.

Northern Oklahoma College Enid astronomy and physical science instructor Fritz Osell stands beside the telescope in the college's observatory, which he designed and built in 2002.

ENID, Okla. — For many Americans, faith and science seem incompatible.

According to a 2015 Pew Research Study, almost one-third of Americans say science and their personal religious beliefs are in conflict, while 59% say “science and religion often conflict.”

But, for Fritz Osell, astronomy and earth science instructor at Northern Oklahoma College Enid, now in his 50th year of teaching astronomy, science and faith are not only compatible, but inseparable.

Originally from Bakersfield, Calif., a town he described as “a whole lot like Enid,” Osell fell in love with the night sky at an early age.

“Ever since I was about 4 years old, it’s just always been something in my mind — that I wanted to be an astronomer,” Osell said.

But, his love of astronomy would have to wait until he was well into his 20s. He served six years in the Marine Corps as a rifleman, including deployments to the Middle East, then played cornerback on the football team at Washington State University. Osell later transferred to finish his degree in physics and mathematics at the University of Washington in 1964.

During his time in college, the faith of Osell’s upbringing in the Episcopal Church fell by the wayside.

“When I was in college, I did what a lot of college kids do — I rebelled against religion entirely,” Osell said.

After college, Osell went on to complete a master’s degree in education technology at the University of Hawaii, then gained work conducting oceanographic research for the federal government.

His opportunity to pursue astronomy full-time came when the University of Hawaii opened a community college campus in Oahu and sought someone who could teach astronomy and physical science.

“The opportunity opened up to teach at a brand new community college, and I just jumped into it,” Osell said.

He went on to build two observatories at the University of Hawaii. Osell said the university already had a research observatory, but the new facilities expanded and opened astronomy to both undergraduate students and the general public.

Since then, he’s worked to make astronomy accessible to not just researchers and graduate students, but to anyone with a passion for the heavens.

“Astronomy is something everyone can participate in,” Osell said, “and for people of all ages and levels of education, there’s always something interesting in the sky.”

Osell said the number of measurements and observations that need to be made are beyond the capacity of the small number of research observatories. But, he said, at smaller facilities, undergraduate and high school students “can do the kinds of observations that are really necessary, but can’t be done with the time available at large observatories.”

Island life, and its isolation, began to wear on Osell, and he wanted to bring his teaching model to mid-America, where he would be about equidistant from the research centers and annual astronomy conventions on the coasts.

“They wanted an astronomy program, and I wanted to come to the center of the U.S. and build an observatory,” Osell said.

That plan came to fruition in 2002, when Osell moved with his wife, Gloria, to Enid to teach astronomy, earth science and planetary science. He did not wait long to start work on building an observatory on the NOC Enid campus.

“As soon as I got off the plane, I came here with a pick, a shovel and a measuring tape,” Osell said, “and I started laying out the observatory.”

That work, and his subsequent teaching and study of the stars, took on new meaning for Osell when he walked into St. Francis Xavier Catholic Church, and rekindled his faith.

Reading Scripture alongside science texts, Osell said he began to see “how science and faith fit together so beautifully, and how they are almost inseparable.”

It wasn’t that there was something new or different in science or faith, Osell said. It was, rather, that he came to look at both from a different perspective.

“It’s like looking at a familiar painting,” he said, “and all the sudden seeing it in a completely different way.”

Osell’s capacity to share his passion for the heavens with others grew in October 2009, when he completed construction of and opened the 115-seat planetarium on the NOC Enid campus, adjacent to the observatory. The facility was renamed the Bert and Janice Mackie Planetarium in 2011, after the Mackies donated funds to upgrade the facility’s projection equipment.

An annual Christmas planetarium show detailing the astronomical signs followed by the Three Magi in the Nativity accounts of the Gospel, now a local staple of the season for many churches and families, got its start when Osell watched a Star of Bethlehem program produced by an amateur astronomer and theologian.

“The astronomy jumped out to me immediately, and of course, the theology,” Osell said, “and I thought ‘I can do better than that.’”

The facilities at the Mackie Planetarium give people in Enid a look at the night sky the way it was, over Bethlehem and Jerusalem, at the birth of Jesus, Osell said.

“With computers, we can run the sky back 2,000 years, and see what they saw in Scripture,” he said.

Osell’s Christmas planetarium show — he presented the last of 2019 on Dec. 14 — details three astronomical alignments that are believed to have coincided with the conception and birth of John the Baptist and the birth of Christ.

He said Persian astronomers had been reading Scripture, including predictions of signs in the heavens in Genesis, Daniel and Revelation, and looking for corresponding signs in the night skies.

“These were three astronomical events that would have knocked them off their feet,” Osell said.

The first, Osell said, came at the time of the conception of John the Baptist, when a combination of Jupiter and the star Regulus, constellations Leo and Virgo, or Virgin, the sun and moon all aligned in such a way to resemble a passage in Revelation 12: “A great and wondrous sign appeared in heaven: a woman clothed with the sun, with the moon under her feet and a crown of twelve stars on her head.”

The following June, at the time of the birth of John the Baptist, Jupiter and Venus aligned in the heart of the constellation Leo, or lion, again seeming to fulfill a prophetic sign from Scripture.

Then, Osell said, from June to December, Jupiter appeared to move in the night sky until, at the time of the birth of Jesus, on Dec. 25, it appeared, from the vantage point of the Magi, to be centered over Bethlehem, in the heart of the constellation Virgo, or virgin.

“It stopped in the heart of the virgin, smack over Bethlehem, on Dec. 25, as seen from Jerusalem,” Osell said. “So, the astronomy and the Scripture dovetail pretty well.”

All of the computer simulations and astronomical calculations place the stars in line to fulfill the prediction from Genesis, Osell said, of a king coming from the house of Judah, symbolized by a lion, into and through a virgin — Mary.

Osell said he loves sharing the planetarium show with others during Advent, “because it brings science and religion so closely together.”

“It brings the science of astronomy and planetary orbits together with Scripture,” Osell said, “and they fit together beautifully.”

Osell acknowledged some scientists, and members of the general public, turn away from faith in favor of science. But, he also pointed to a long list of physicists, astronomers and other scientists whose faith was not dispelled, but rather strengthened, by their greater understanding of the physical world.

“The more they really learned about how the universe works, the more they realized this is a divine, beautiful design,” Osell said. “Science shows how God works in our world.”

Osell said his faith is stirred in part by the awe and wonder he sees in the heavens, but perhaps more so by the seemingly impossible odds against the known universe coming about at random.

“The odds of everything falling together to be the way it is — it’s almost impossible,” Osell said. “The mathematical constants, the gravitational constants, if they were off by a zillionth of a part, we couldn’t be here.”

To describe the improbability of the universe and all known forms of life being formed at random, Osell pointed to the calculations of Roger Penrose, an English mathematical physicist, mathematician and philosopher of science at Oxford University.

Penrose calculated the odds against the universe being formed at random were “one part in 10 to the 10 to the 123rd power.”

“This is an extraordinary figure,” Penrose commented after publishing his findings. “One could not possibly even write the number down in full in the ordinary denary notation: it would be 1 followed by 10 to the 123rd zeroes. Even if we were to write a 0 on each separate proton and on each separate neutron in the entire universe — and we could throw in all the other particles for good measure — we would fall far short of writing down the figure needed.”

Osell describes those odds in a more tangible way.

“It’s like a tornado going through a junk yard, and a 747 jet flying out of the chaos as a finished airplane,” Osell said. “You’d have to say, ‘No, all those parts didn’t come together on their own — some intelligent design built that 747.’ Things couldn’t possible happen that way without a design.”

To challenge the minds of his students, Osell often offers a favorite extra-credit question on his astronomy and planetary science final exams: “Explain how a mathematical equation could be a thought in the mind of God.”

“The more we know of creation,” Osell said, “the more we come to love the Creator.”